In part 1 of this article we spent quite a bit of time looking at “magnifying” verses “non-magnifying” reticles to try to ensure readers are equipped to make their own choice as to which type they might prefer for the hunting applications they will use them for. In my past experience I’ve found many sporting shooters will shy away from an expensive European rifle-scope not because it’s expensive, but because they’ve heard that “magnifying reticles” are bad or a mark of something inferior, whereas the opposite is true. So we looked at both and arrived at the conclusion that if you are hunting where your shots will be at shorter ranges, say under 200 yards, then a low powered rifle-scope with a non-magnifying reticle will be preferred. However, if you wish to use your rifle-scope’s reticle as an aid to range estimation for longer range shots then a magnifying reticle that is always the same size in relation to your target is much better. This is exactly what the Schmidt and Bender rifle-scopes provide. Non-magnifying reticles for the low powered rifle-scopes and first focal plane “magnifying” reticles useful for range estimation for the mid to high powered rifle-scopes. Schmidt and Bender rifle-scopes are made by people who understand the needs of hunters, including international hunters, and so their designs make practical sense. Their designs are governed by what is really going to work in the field rather than by what might be “fashionable”.

In this part 2 article we will focus on the Zenith series from Schmidt and Bender.

One of the principles for anyone out in the field be they soldier or sporting shooter is the “KISS” principle. KISS is an acronym that stands for “Keep It Simple Stupid”. So, unless you really understand and know how to use the various lines, grids and mil-dots we see in rifle-scopes intended for extended range or military and police use then you don’t want them. As hunters we normally don’t want the complication of a rifle-scope intended for such extended range use. We want the most simple reticle that will fill our actual needs in the field. Because Schmidt and Bender’s short range rifle-scopes are from the Zenith series we’ll look at the Zenith series first.

For the rifle-scopes in the Zenith series Schmidt and Bender offer the choice of either standard reticles or the new Flashdot reticles. 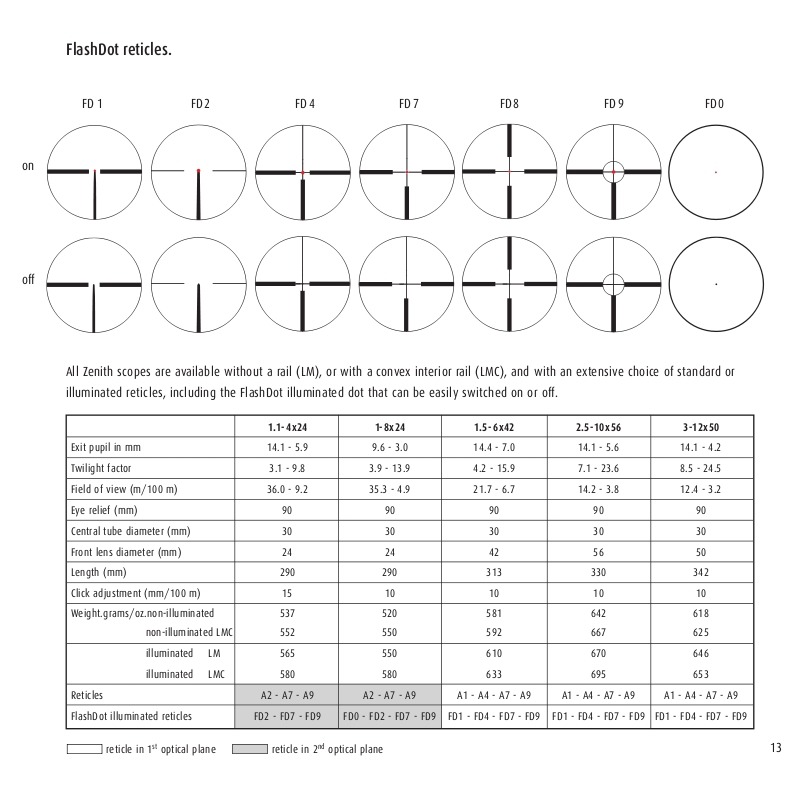 The full range of Flashdot reticles available from Schmidt and Bender and a table showing the technical specifications of the models in the Zenith series, including those equipped with Flashdot and those not. (Image courtesy of Schmidt and Bender)

The Schmidt and Bender Flashdot system has been designed to provide the perfect illuminated reticle system for daylight and night use. It has also been designed to ensure that the main problem with an illuminated reticle, the problem that the illuminated part is always visible whether it is switched on or off, is removed. In the Flashdot reticle the illuminated segment completely disappears when the illumination is switched off allowing the shooter to see the fine detail of the cross-hairs without distraction. When switched on the Flashdot reticle functions much like a “quick point” sight providing a bright red illuminated aiming point that naturally draws your eye to the aiming point. This is ideal for fast both eyes open target acquisition. For twilight and night use the brightness of the Flashdot reticle can be adjusted down to suit the prevailing conditions. The Flashdot reticle automatically switches itself off after six hours to conserve battery life in case the shooter forgets and Flashdot equipped rifle-scopes have a spare battery under the windage adjustment turret just in case the shooter has forgotten to turn it off a few times too many.

If I were buying a rifle-scope for short range use and wanted the quickest sight acquisition possible I think I would prefer the FD 2 reticle. For a more standard general purpose rifle-scope that may need to be used at longer range I would choose the FD 7.

The Zenith series of rifle-scopes are also available without the Flashdot feature but with standard non-illuminated reticles. Such models are slightly cheaper but when one is making choices for a standard or Flashdot equipped rifle-scope it is normally not a choice governed by a modest difference in price. The quality of the rifle-scopes is going to be exactly the same, and with Schmidt and Bender that means as high a quality as can be had anywhere. Personally I would tend to choose the standard rather than the Flashdot; but I’m horribly old fashioned. You might really want or even need the Flashdot system. Schmidt and Bender provide us with the choice. I will feature the standard reticle series in our third and final article when I look at the Classic series.

The other important feature of the Schmidt and Bender Zenith series is the Posicon display for the windage and elevation turrets. The Posicon display serves two purposes; it shows how much adjustment is available in each turret so you will not run out of adjustment. It also allows the use of a silver ring mounted in each turret to record settings for the zero of more than one bullet or load so the shooter can re-set their zero to suit whichever loading they want to use for a particular purpose.

The Posicon display in the windage and elevation turrets of the Schmidt and Bender Zenith series.

As the new series of rifle-scopes from Schmidt and Bender the Zenith series set the highest possible standard for modern rifle-scopes.

In our third and final part to this Schmidt and Bender trilogy we will look at the Classic series and the features that make this series different, yet complimentary.