When Colt ceased production of their double-action revolvers back in 1999 there was much wailing and gnashing of the teeth amongst the Colt aficionados. It remained possible to get a Colt Python made to special order up until 2005 when all production completely ceased. So in recent years if someone has wanted a Colt double-action they have needed to shop around to find a good used one. So Colt’s recent re-entry into the double action revolver market with their new Colt Cobra is welcome and we hope that goes well for them. But we also observe that the new Colt Cobra is a new design, we don’t know if Colt will be making such classics as the Colt Python again in its original form although there are no doubt many potential buyers out there just itching to burn a Colt Python sized hole in their boringly full wallets. 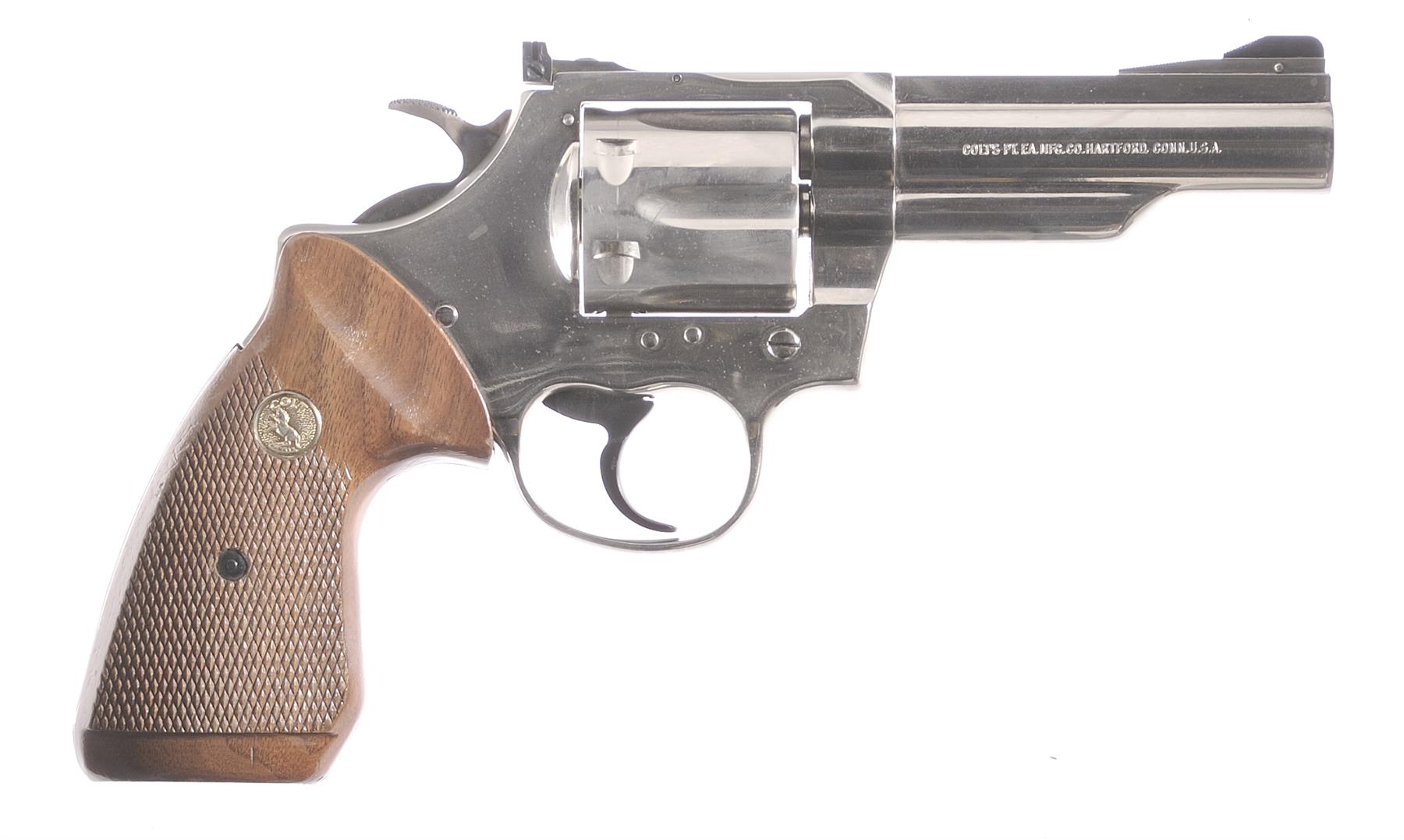 Revolvers on the second hand market are obviously not new and buyers have to be aware of what to look for if purchasing one. The Colt Trooper Mk III in the pictures above is an example that is to be offered at auction by Rock Island Auction on March 23rd, 2017.

You will find the sale page for the above pictured revolver if you click here.

The condition of that revolver is rated by Rock Island Auction as being; “ND – VERY GOOD: in working condition, 80% finish or better.” 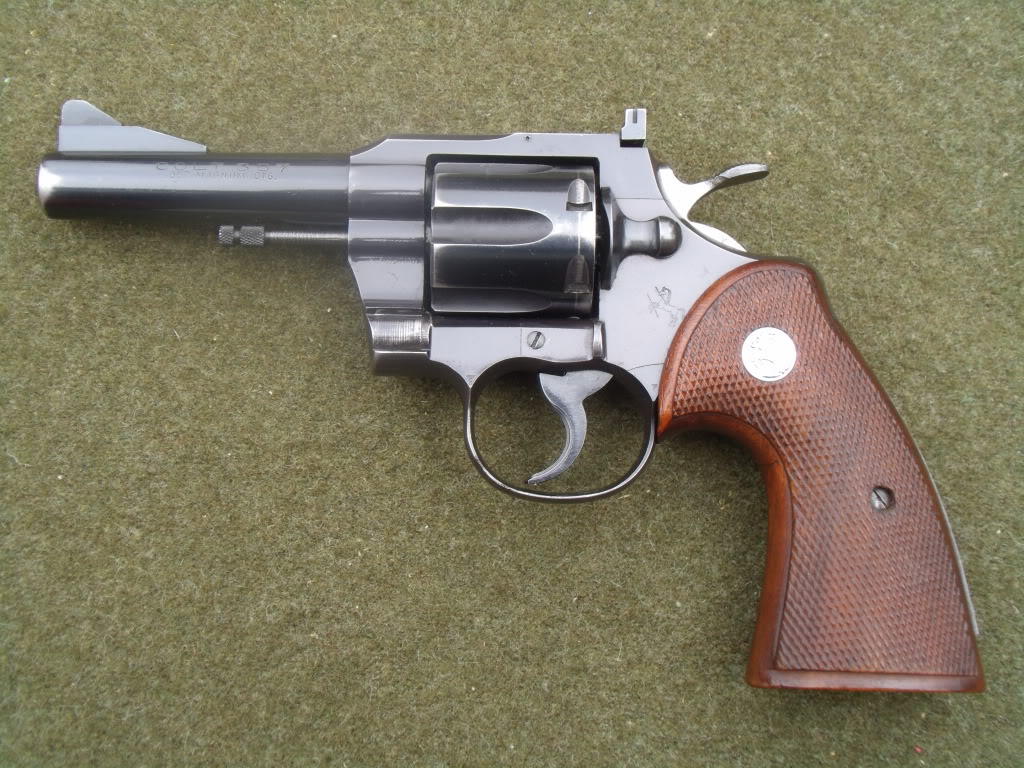 The Colt Trooper first appeared in 1953 and remained in production until it was replaced by the Mark III version in 1969. This first model Colt Trooper was based on the Colt “I” frame as used for the Officer’s Model Match and offered in .22lr and .38 Special. The Colt .357 version was based on the same “I” frame which would in 1955 be used as the basis for the Colt Python also.

Colt .357 with cylinder open. This revolver was built on the same frame that would be used on the later Colt Python. (Picture courtesy gunauction.com).

In 1969 Colt decided to keep the Colt Python as their premiere model and change the design of the Colt Trooper to make it cheaper to manufacture and sell. This led Colt to design their new “J” frame which did away with the extensive hand fitting and forging that made their revolvers such as the Python more expensive than the competition. 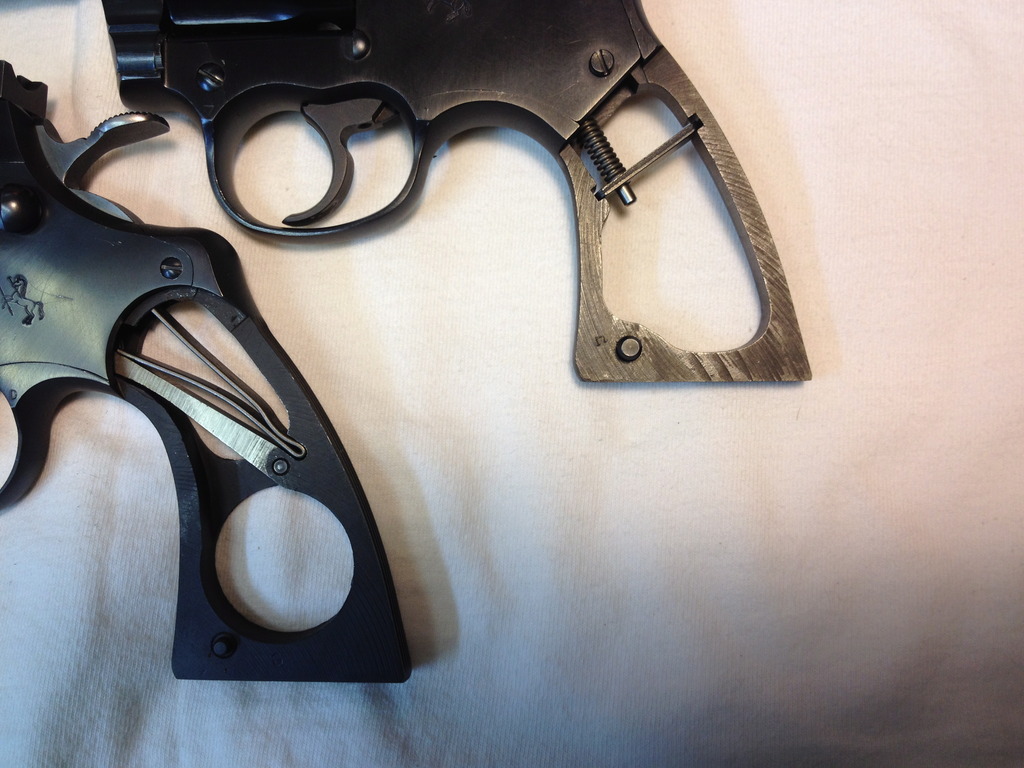 Comparison between the older style “I” frame as used on the Colt Python and pre-1969 Trooper (left), and the Mark III’s “J” frame with stainless steel coil main spring (right). (Picture courtesy smith-wessonforum.com).

The Colt Trooper Mark III essentially became the “working man’s Python”. Colt was able to reduce manufacturing costs by moving to sintered internal parts which could be more easily fitted and heat treated. The new action also did away with the “V” mainspring and replaced it with a stainless steel coil mainspring. These changes largely eliminated expensive hand fitting but still produced a durable revolver of excellent Colt quality. 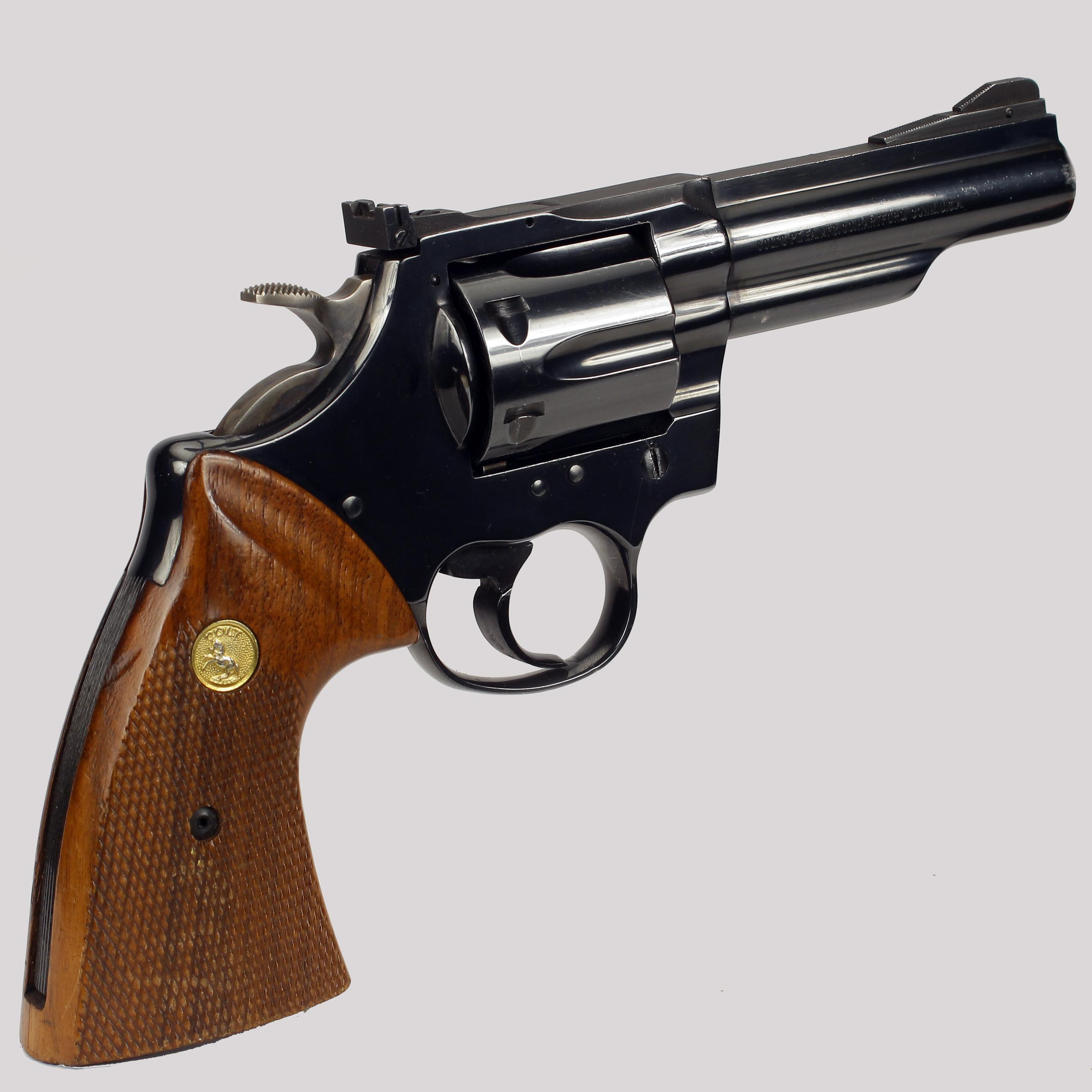 The Colt Trooper Mark III was the top of the line revolver in the new “J” frame series. It featured a full top rib and shrouded ejector rod. The Trooper Mark III was also the first of Colt’s revolvers to be fitted with a transfer-bar lock-work system which precluded the possibility of the hammer discharging the revolver unless the trigger was pressed. This was of particular interest to law enforcement agencies and a great advantage over the older lock-work system of the previous models.

The Colt Trooper Mark III was fitted with target grips, a wider target hammer, and adjustable sights. It was available finished in the beautiful Colt Royal Blue, bright nickel, or the “Coltguard” satin nickel finish. This model was made from 1969-1982. 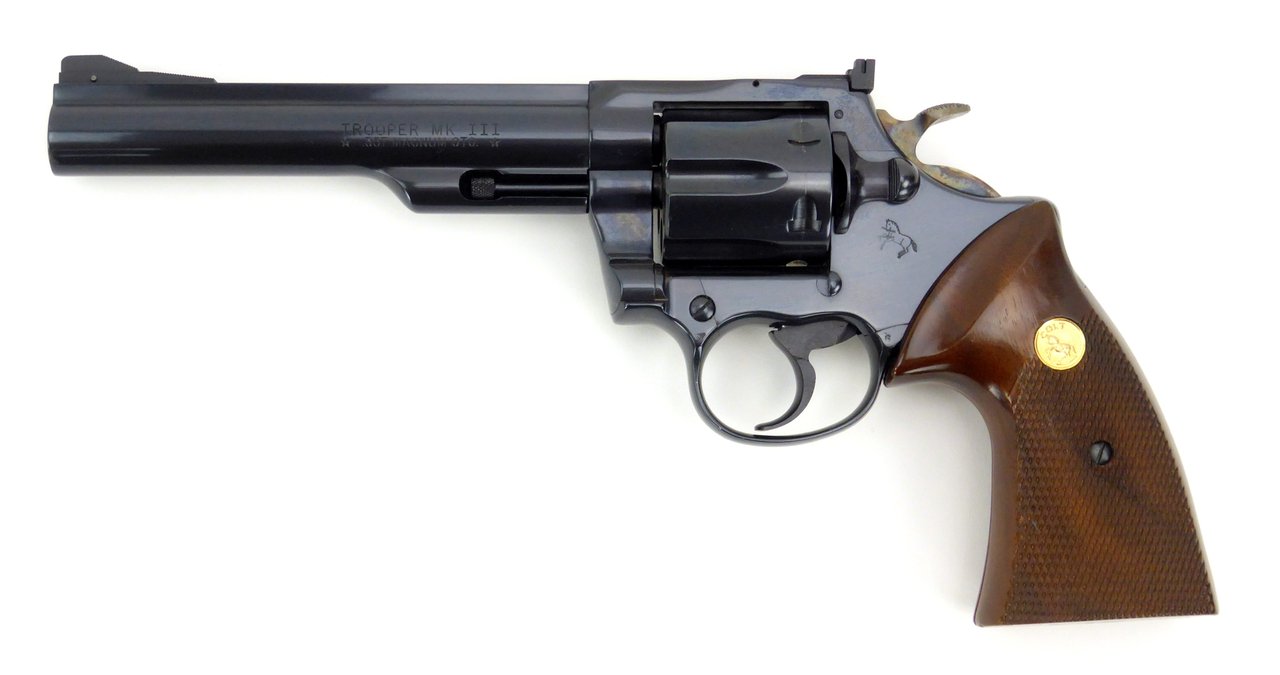 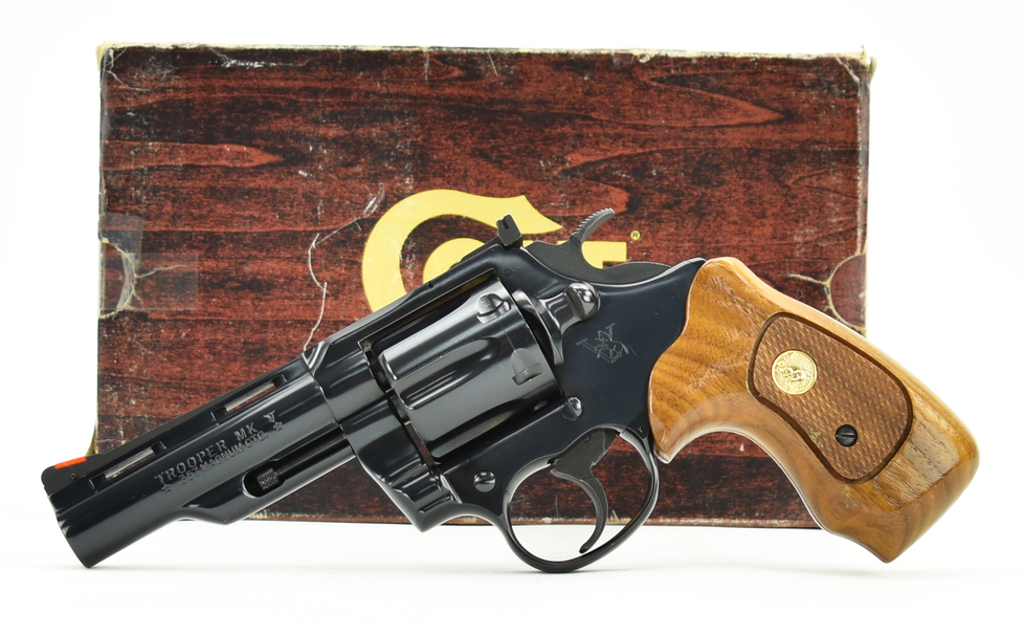 The Colt Trooper Mark V was made from 1982-1985 on yet another new frame, the Colt “V” frame, which was slightly smaller than the “J” frame of the Mark III and about the same size as the Smith & Wesson “K” frame. The style of the revolver was kept much the same as the Mark III but with the option to have either the solid top rib of the Mark III or a ventilated top rib as used on the Python. Internal parts were mostly castings which helped to keep costs down again and the trigger system was re-designed and improved to reduce lock-time.

The Colt Trooper in its three variants is not as legendary as the Colt Python but they are a great revolver and are slightly less expensive on the second hand market. With Colt’s impeccable Royal Blue or nickel finish these are beautifully made revolvers.

You can find a whole range of Colt Trooper revolvers for sale at Collectors Firearms if you click here.

For collectors you can also find some interesting Mark I Colt .357 revolvers at Guns International.com; a blued one if you click here, and a bright nickel one here.

So if you’ve got a wallet with some boring money in it and would really like to exchange that boringly ordinary cash for a nice interesting revolver then there could be a neat Colt revolver in your future. You just need to make a decision; “The money or the gun?” 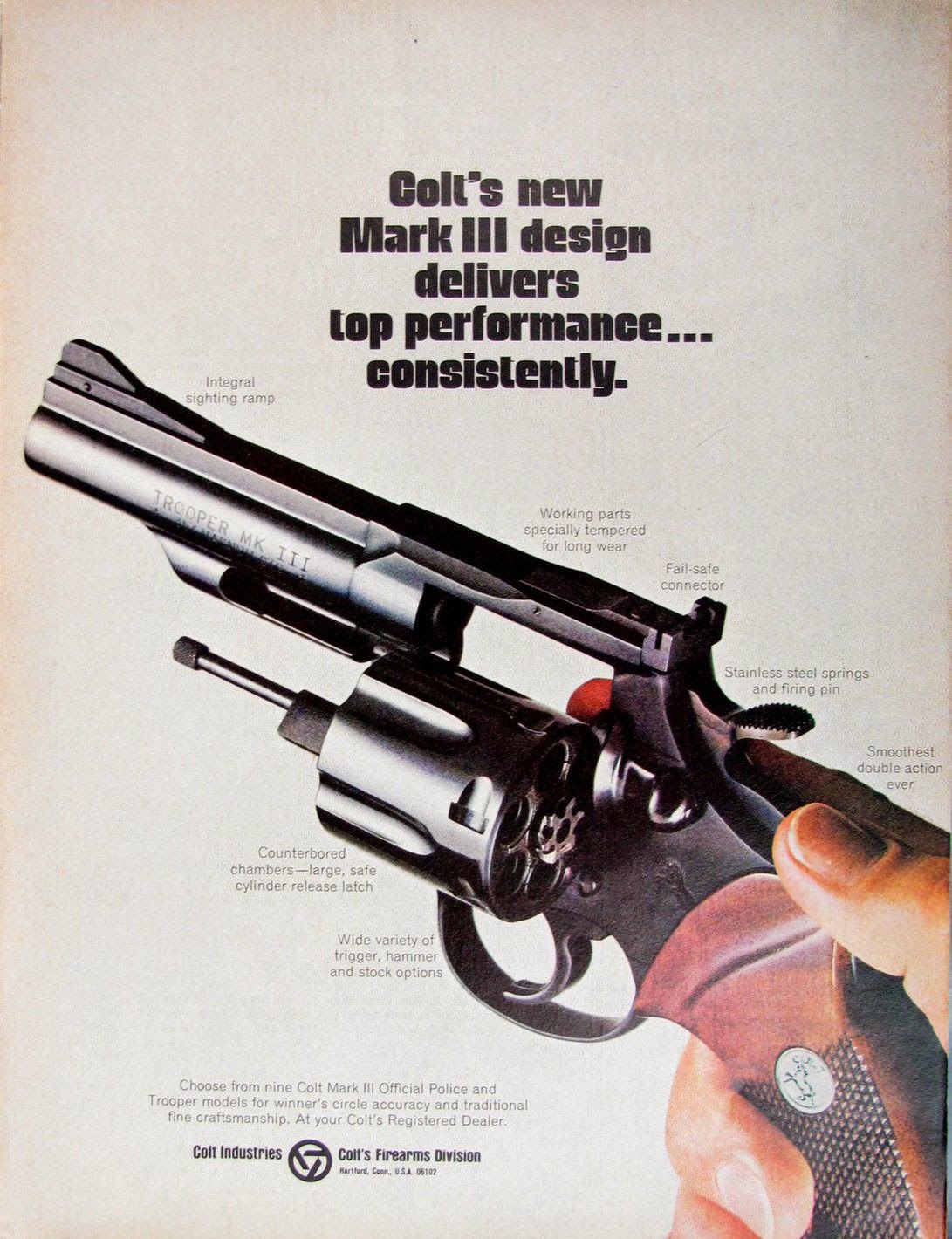