The Iso Grifo A3 Competizione and its near identical siblings the Bizzarini GT 5300 Strada and GT America are, in my mind at least, the most desirable cars made for enthusiasts ever, bar none. If you give me a line-up of the most desirable GT cars ever made it won’t matter what’s in that line-up I’ll choose the Bizzarrini design every time without needing so much as an eye blink to think about it.

The Iso Grifo A3 Competizione exudes purposefulness from every angle. (Picture courtesy Bonhams).

Bizzarrini’s design of the Iso Grifo Competizione overlaid by Giorgetto Giugiaro’s graceful bodywork is so austere and so purposeful it almost looks like it could have been a kit car available for the enthusiast to assemble themselves as the Lotus Elan was. In truth the Bizzarrini and Giugiaro design was uncompromising in its creation to provide the most exciting, practical and balanced front mid-engine GT car made. 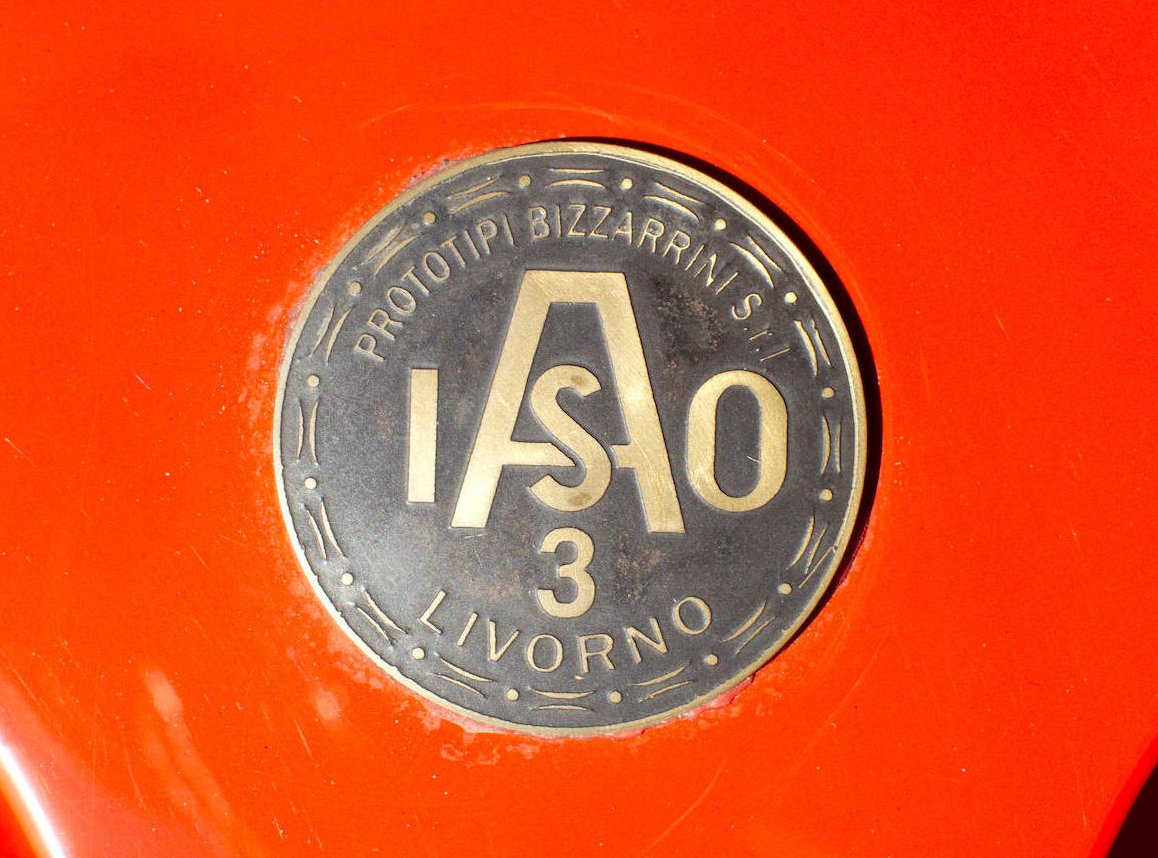 The Iso Grifo A3 Competizione stands out as the greatest of Bizzarrini’s designs. (Picture courtesy Bonhams).

Some may not have heard of a “front mid-engine” before and indeed the term is not widely used, partly because not many such cars exist. Just as we use the term “rear engine” for a car in which the engine overhangs behind the rear axle line we use the term “front engine” for a car whose engine, to whatever extent, overhangs the front axle line. In the Bizzarrini design of the Iso Grifo A3 Competizione the engine sits well behind the front axle line and intrudes back into the cockpit. Bizzarrini was determined to achieve as perfect a 50/50 weight distribution as possible. 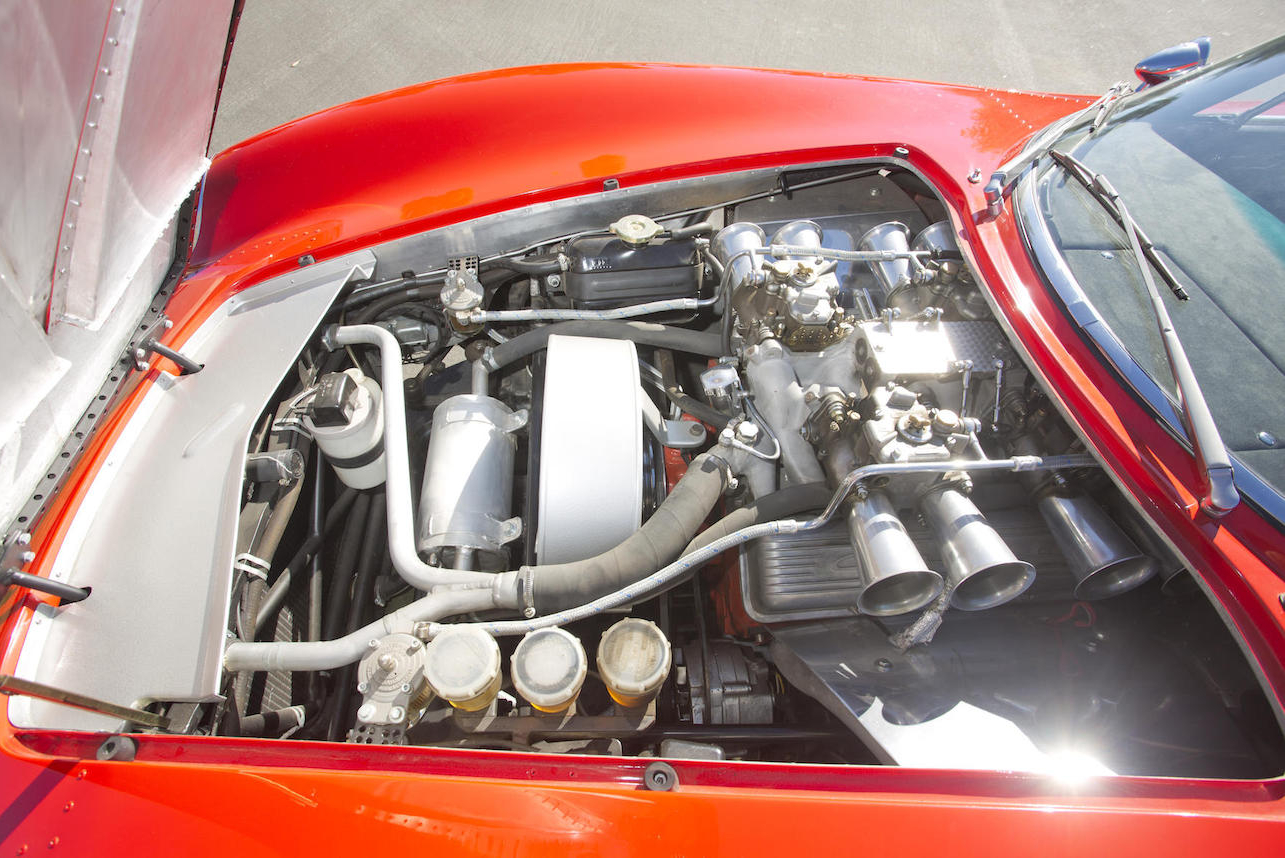 With the engine bay opened the front mid-engine location of the 327cu in Chevrolet V8 is immediately apparent. Picture courtesy Bonhams).

Those who were blessed with being allowed to review the Iso Grifo A3 Competizione or the Bizzarrini GT America or GT Strada back in the sixties commented on the sheer lowness of the car and its width, bringing its center of gravity as low as possible and giving it extraordinary stability.

The interior of the cockpit is at once comfortable, ergonomic and “Spartan” as the reviewer for Road and Track magazine noted in his review in the mid-sixties. 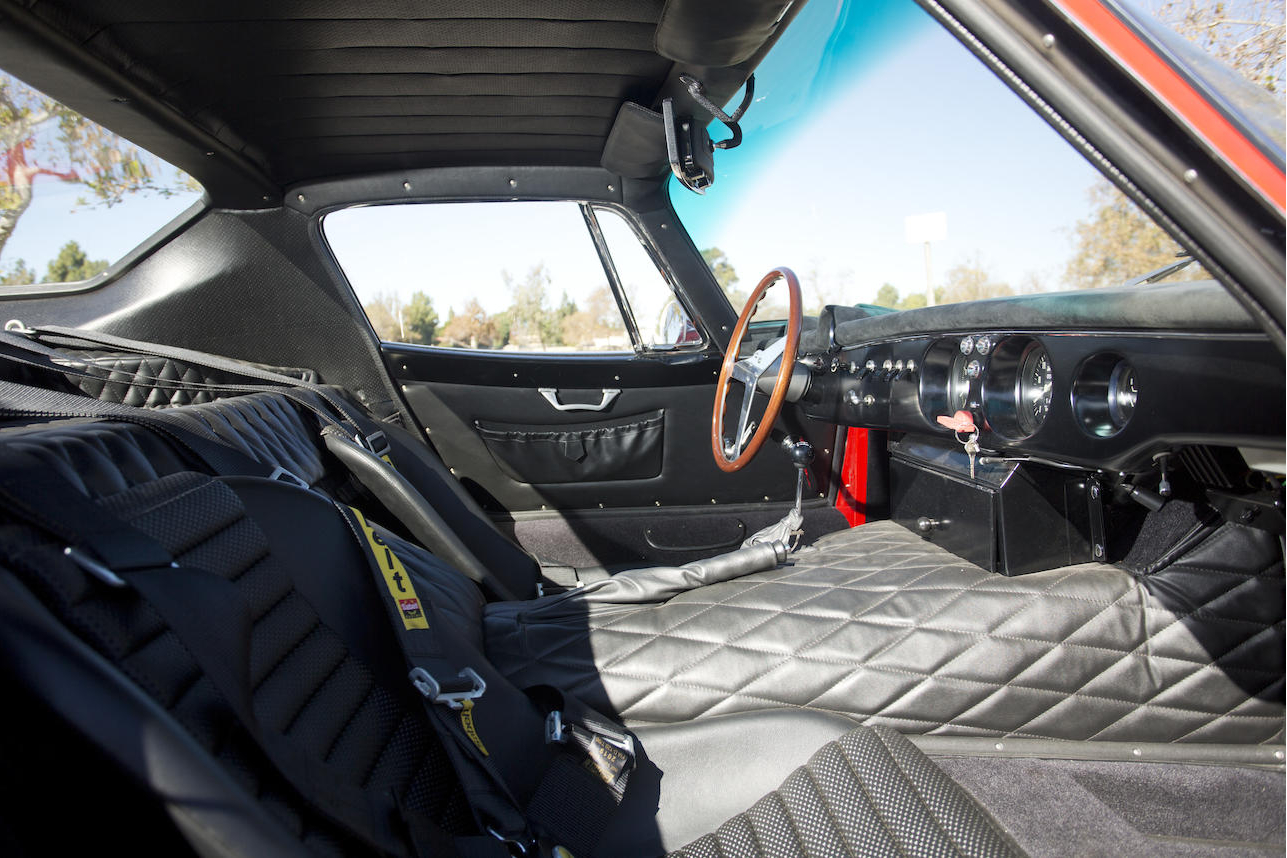 The interior of the Iso Grifo A3 Competizione gives an immediate impression of Spartan austerity yet also of comfort combined with brilliantly thought out ergonomics. (Picture courtesy Bonhams).

The cockpit gives the impression of being something one might expect to find in an aircraft. It is without doubt a perfect “office” for a gentleman competition driver. The dashboard layout is quite unusual and worth a closer look. 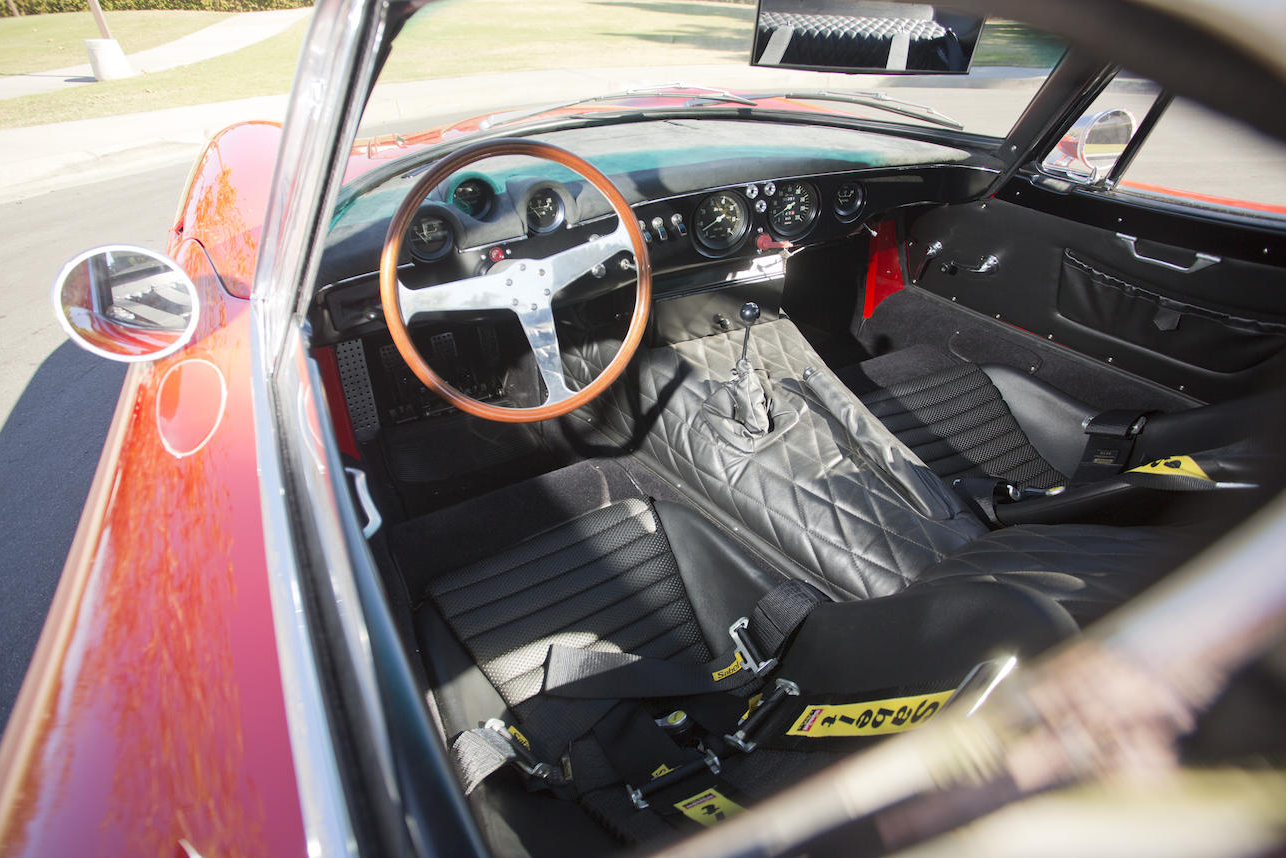 The instrument layout on the dashboard is made for functional practicality. (Picture courtesy Bonhams).

The practicality of this layout can be seen in the first thirty seconds of the following short video.


The only shame with that video is the overlaying of a rock music track at the end whereas most of us would rather just listen to the gorgeous music being piped out of that 327cu in Chevrolet V8. One can never hear enough V8 music can one! 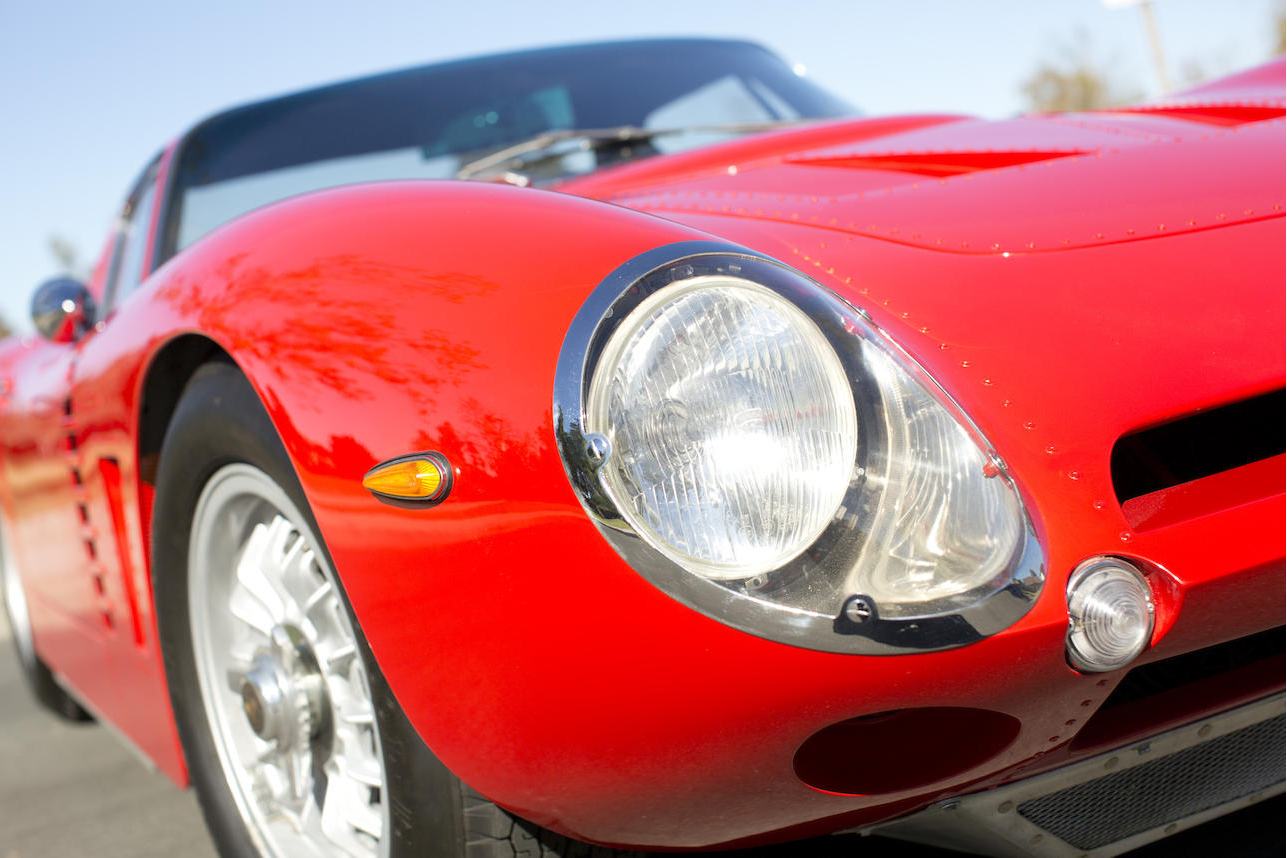 The feature car has bodywork built by Piero Drogo’s Carrozzeria Sports Cars in Modena complete with riveted panels and is an example of the early production Iso Grifo A3 Competizione cars.

The bodywork of our feature car was constructed by Piero Drogo’s Carrozzeria Sports Cars in Modena. The Drogo constructed cars feature riveted body panels which tend to add to the impression of utilitarian purposefulness created by them. Only about twenty such cars exist. Although Renzo Rivolta of Iso and Giotto Bizzarrini worked in partnership to create the Iso Grifo A3 Competizione in reality Renzo Rivolta was primarily interested in promoting his luxurious road going Iso Grifo A3/L. Giotto Bizzarrini was interested in making cars that were competition oriented. 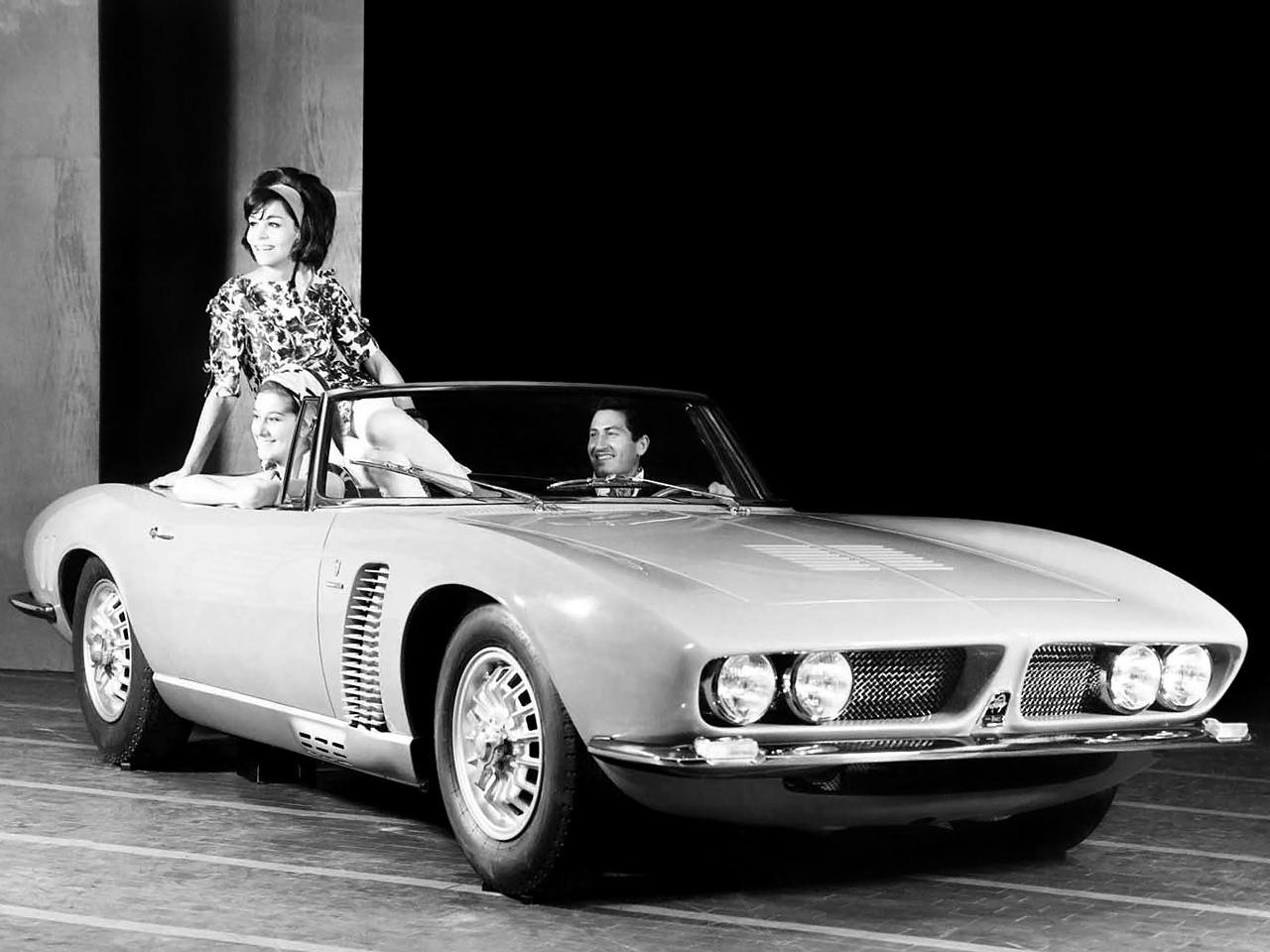 The Iso Grifo A3/L was aimed at a quite different type of buyer than Bizzarini’s Iso Grifo A3 Competizione. (Picture courtesy carstyling.ru).

Eventually Renzo Rivolta and Giotto Bizzarrini agreed to go their own ways and Bizzarini began selling the cars under his own name as the Bizzarini GT 5300 Strada in Europe and the Bizzarini GT America in the United States. Technical specifications remained pretty much the same but Giotto Bizzarrini moved to a different coachbuilder Salvatore Diomante whose business was initially called Carbondio and later changed to Autocostruzione SD of Torino. It was Salvatore Diomante who gave the Bizzarrini cars a touch of more refinement, the rivets of the Drogo construction were gone for example, although some of us prefer the Drogo riveted cars. Diomante later became the foremost restorer of these cars and our feature car is an example of his work having been restored in 2012.

The technical specifications of our feature car are as follows:-

Chassis no. B0213
Engine no. 129-F12183Q
327ci OHV V8 Engine
4 Twin Weber Carburetors
420bhp at 5,400rpm
4-Speed Manual Transmission
4-Wheel Independent Suspension
4-Wheel Hydraulic Disc Brakes
Our feature car is to be auctioned by Bonhams at their The Scottsdale Auction at Scottsdale, The Westin Kierland Resort & Spa on 28th January 2016 at 11:00am.
You will find the Bonhams auction page for this car if you click here.
There are a number of exceedingly desirable cars going under the hammer at the Scottsdale auction, but for me the Iso Grifo A3 Competizione with its riveted body by Piero Drogo is by far the most riveting of them all. 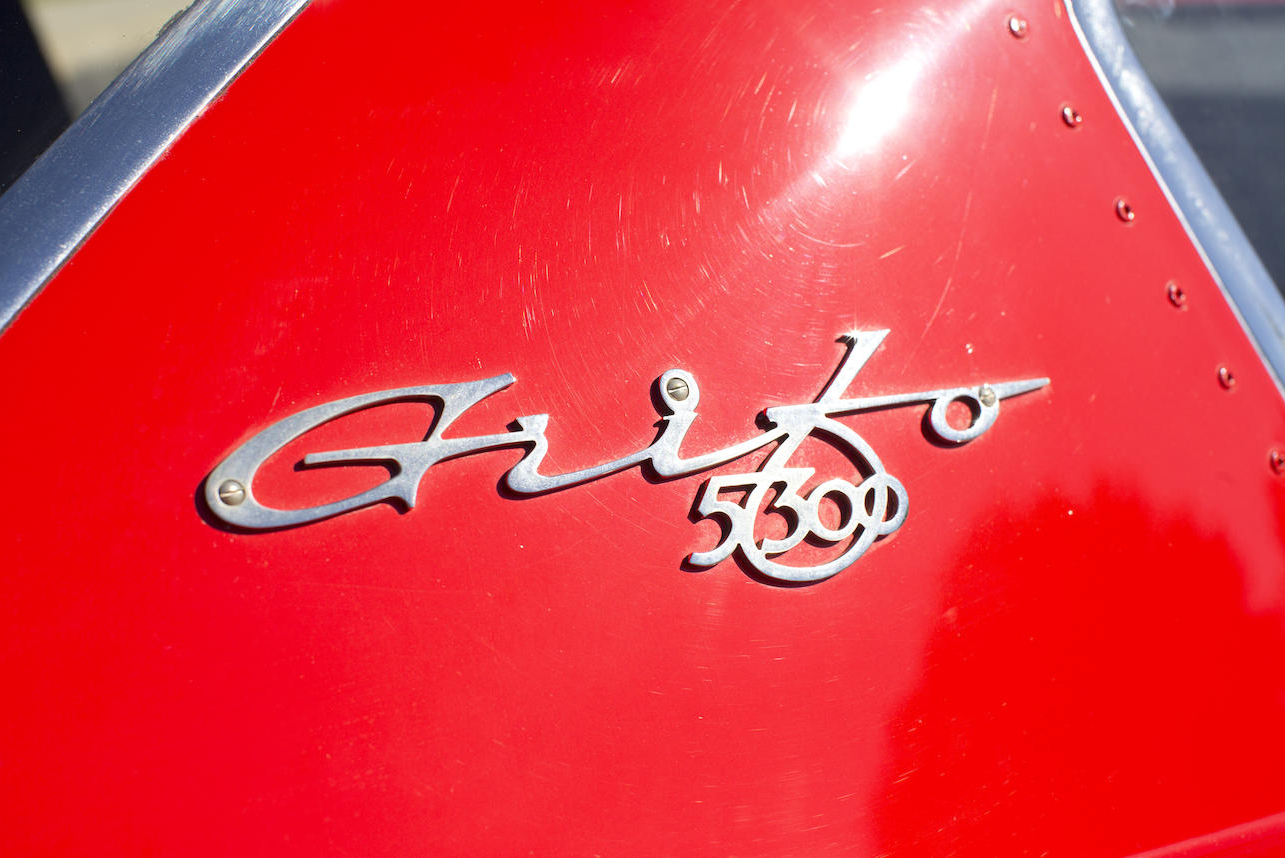