The creation of the Sunbeam Tiger is a story that deviates somewhat from the image we may have of the British being stuffy and conservative; getting that V8 engine into the diminutive engine bay of the petite Sunbeam required the use of a sledgehammer to “re-model” the bulkhead so the 260 cu. in. Ford V8 would fit. Sledgehammers were therefore a regular build tool on the production line. 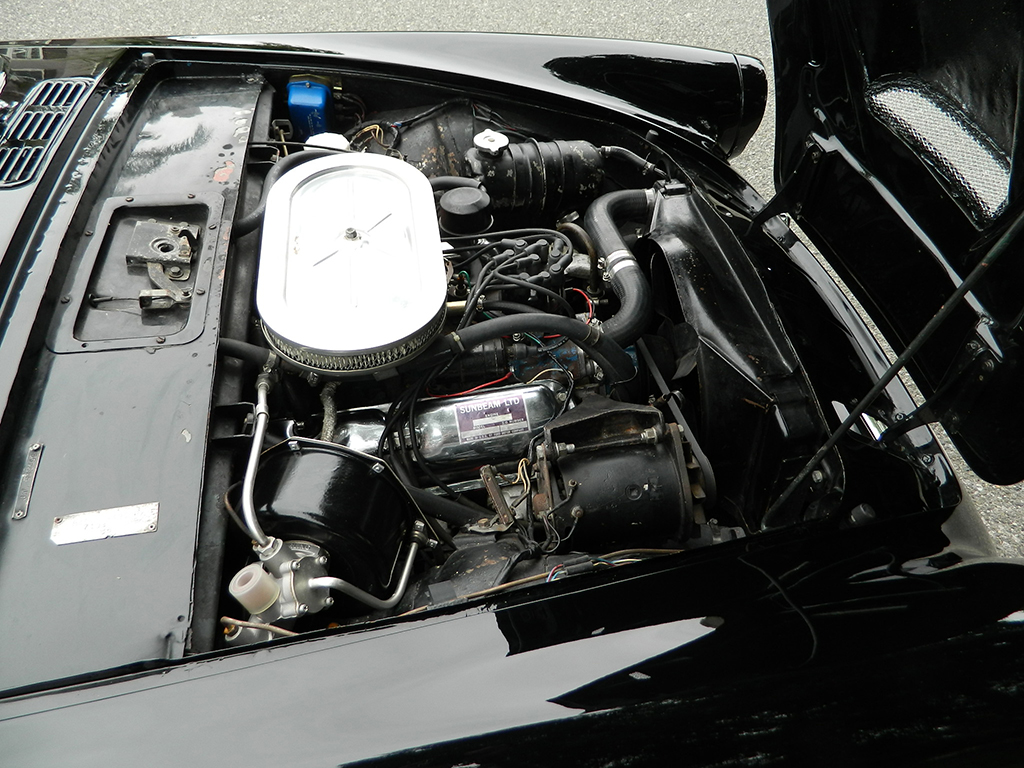 The 260 cu. in. Ford V8 fits into the engine bay originally designed to accommodate a four cylinder. There is no room to spare however.

The Sunbeam Tiger was created by dropping a Ford V8 into a small British sports car; the Sunbeam Alpine. Sunbeam was a car brand owned by the Rootes Group that also owned such British sounding car brands as Singer and Humber and it was a conservative motor company owned by Lord Rootes. The Rootes Group were quite behind the pack when the British car industry discovered the American market and began making models specifically for export to the US. Jaguar were exporting their beautiful XK120 by 1949 and actor Clark Gable was the first to receive one. British Motor Corporation were able to team up with Donald Healey to put the Austin-Healey 100 into production and they too winged their way stateside whilst MG got their MGA into production and sent them by the boat load stateside also. But the Rootes Group were left behind. 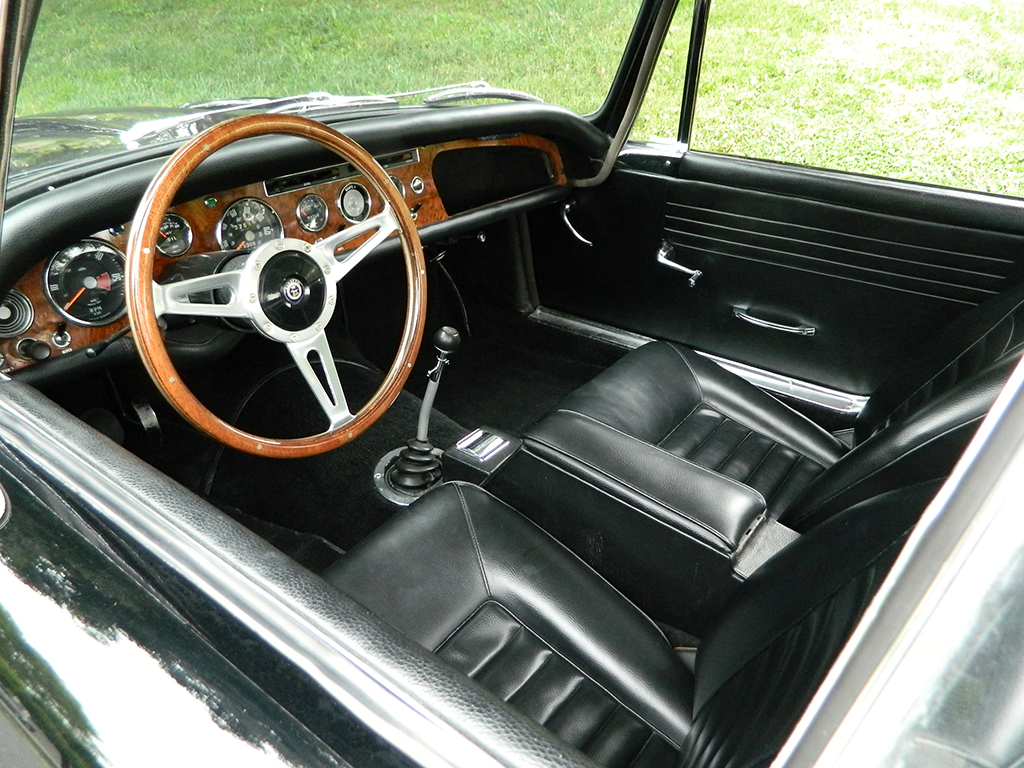 The interior of the Sunbeam Tiger and its parent the Sunbeam Alpine could almost be Italian with alloy wood rimmed wheel, wood veneer dashboard and almost austere trim.

Seeing their competitors earning export dollars got the people at Rootes Group thinking and so they decided to make a sports car based entirely on parts they had in production already. The new sports car was to be based on the unlikely platform of a small station wagon, the Hillman Husky. It was to have a “nippy” four cylinder engine and four on the floor gearshift to make it “sporty”. Despite the fact that these original ideas sound like a recipe for a car that is destined to earn the “Most boring sports car in history” award the Rootes Group made one really wise decision. They decided that they needed to get an American to design the car, and not just any American, they went to Raymond Loewy, the guy who designed the Pennsylvania Railroad’s streamliners. 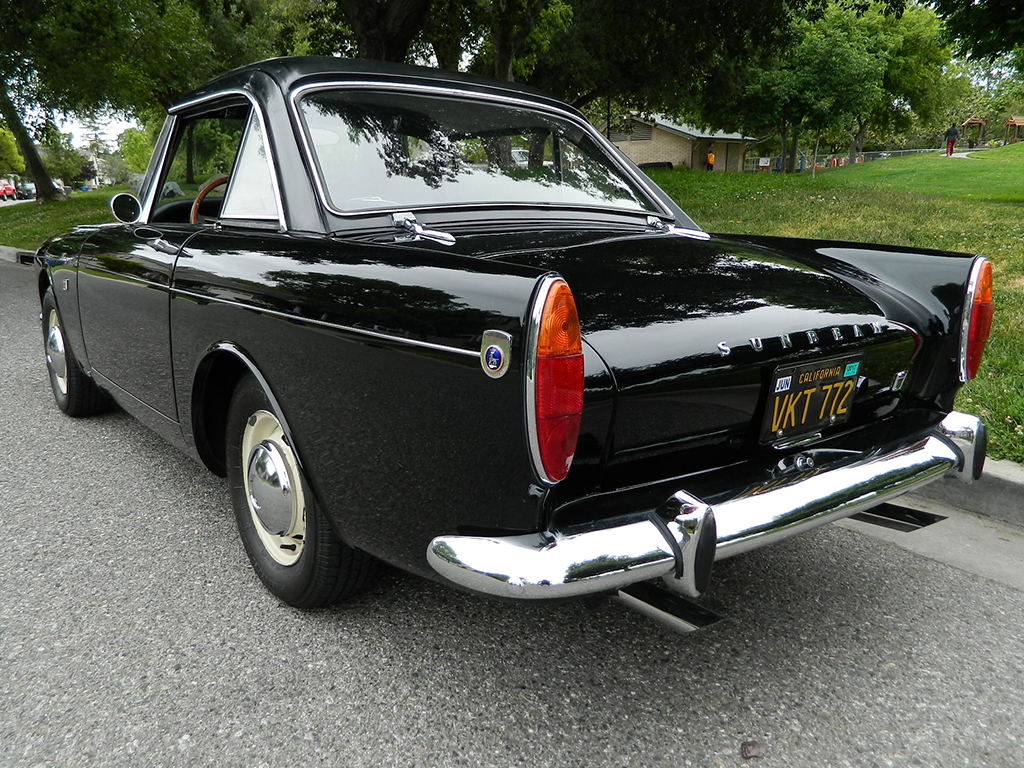 Raymond Loewy was a great American car stylist who’s design for the Sunbeam gave it almost a wedge shape with prominent rear fins. Very American and not at all British. The exhaust pipes give us a not so subtle hint that rather more than a “sporty” four cylinder engine lurks beneath the hood.

Raymond Loewy handed the Sunbeam styling job to ex Studebaker designer Ken Howes and the design they came up with was very “avant garde“. It might best be described as a design by Americans that looks as if the Italians did it. They got it right and the little Sunbeam was an instant head turner. But the car had features that the other British sports car manufacturers were behind on; the Sunbeam was given wind-up windows and either a canvas top or hard top that were actually waterproof. The car even had a heater! 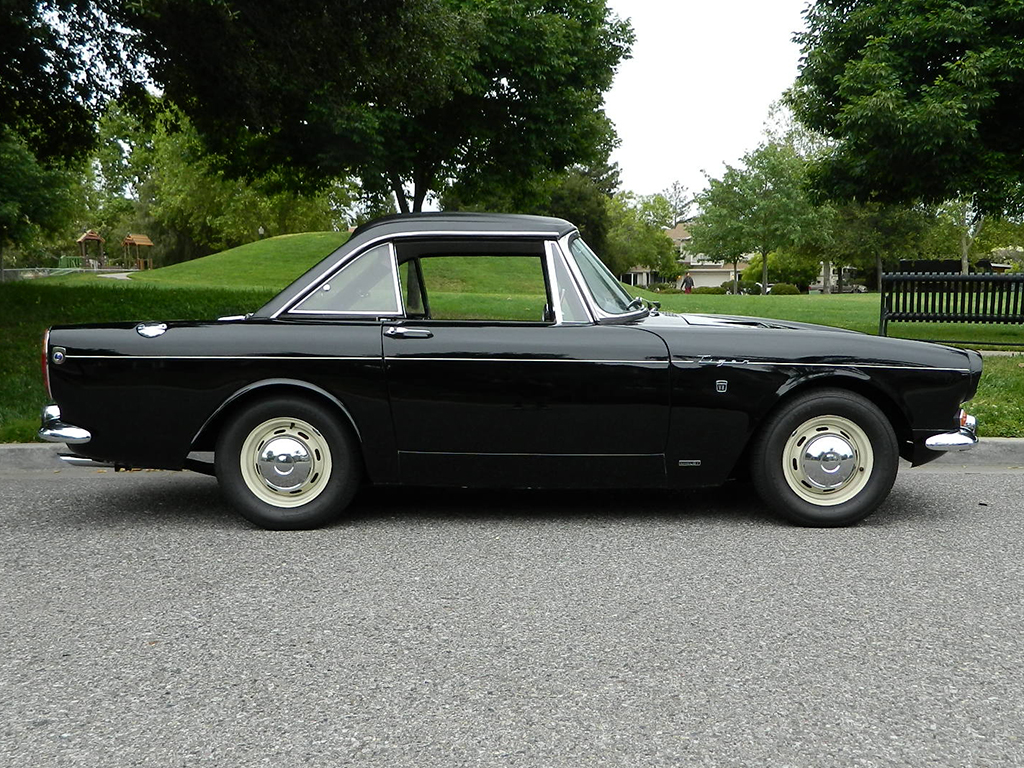 The simple elegance of the Loewy and Howes design sets this car apart.

The little Sunbeam Alpine went into production in 1959 and it was a nice little car but to really sell in the United States a sports car needs something a little more purposeful than a “sporty” four cylinder engine. It needs a V8. Rootes Group knew that their car was underpowered and to them the obvious solution was to approach Ferrari to see if they could do a deal to fit a Ferrari engine into the Alpine; they couldn’t. The idea of dropping a Ford V8 engine into an Alpine originally came from Australian racing driver Jack Brabham in 1962. Jack Brabham suggested the idea to Rootes Competition Manager Norman Garrad, and Norman Garrad happened to know Carrol Shelby who had already dropped an American V8 engine into another British sports car, the AC Ace, creating the AC Cobra or Shelby Cobra as it came to be known. 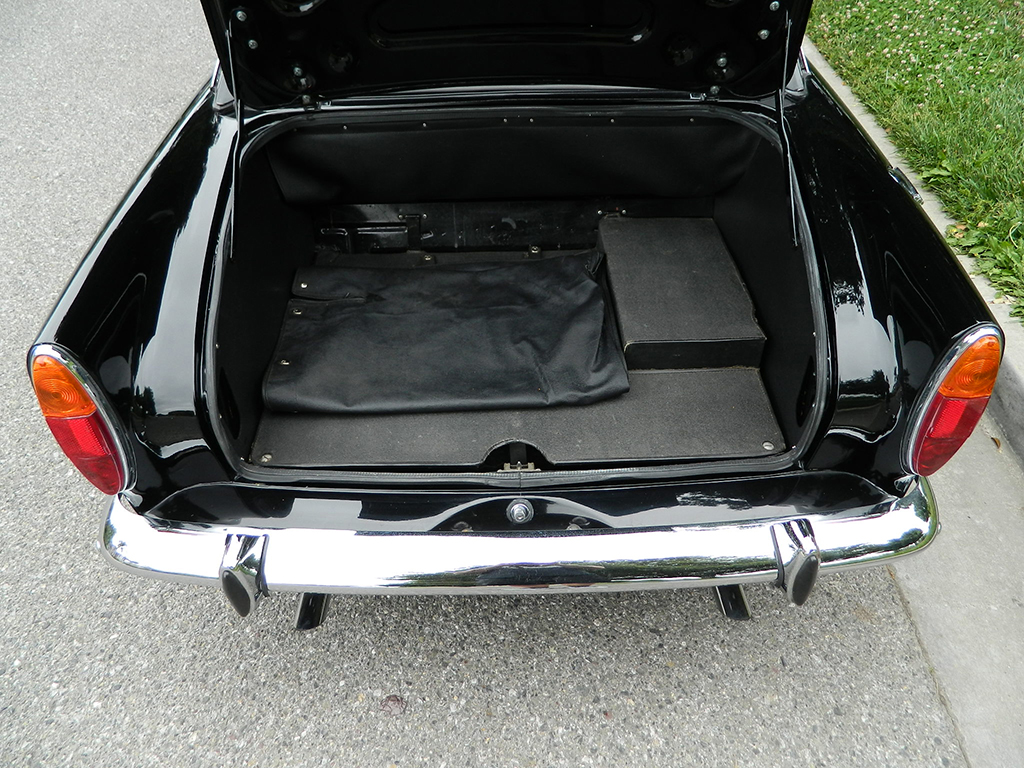 Another practical thing the Sunbeam Alpine and Tiger had over other British sports cars was it had decent boot space.

Carroll Shelby was interested and it didn’t take long for a couple of prototypes to be created with great results. Interestingly dropping the Ford V8 into the car still allowed the weight distribution to be kept to an almost ideal front 51.7% to 48.3% rear. The Sunbeam Tiger went into production in June 1964 and was very much a success story. It even made its way onto the small screen being secret agent Maxwell Smart’s car in the TV series “Get Smart”. 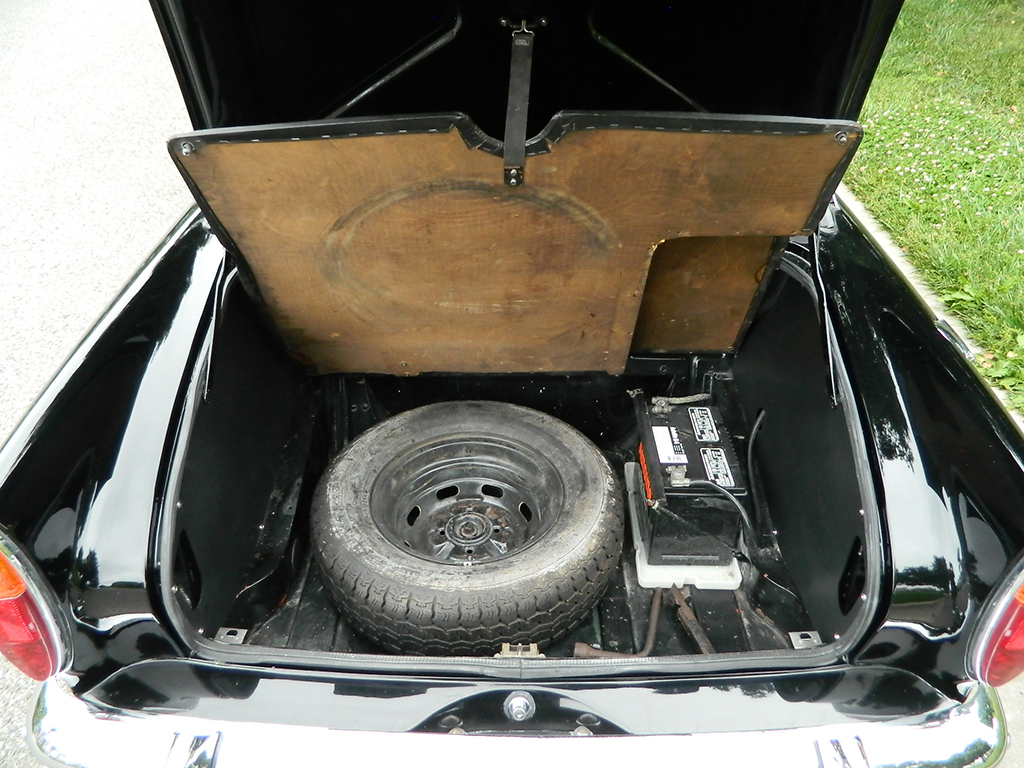 Both the spare tire and the battery are located in the rear of the car to help get the front to rear weight distribution to 51.7% front and 48.3% rear.

There finished up being three versions of the Sunbeam Tiger; the Mark IA with the 260 cu. in. Ford V8 and the older pure Loewy and Howes body style, the Mark IB with the same engine and re-designed body style, and the Mark II which had a Ford 289 cu. in. V8. Production ended in 1967 when Chrysler Corporation bought out Rootes Group. Chrysler did not have a suitable in house engine to use in the Tiger so production of the car was ended. 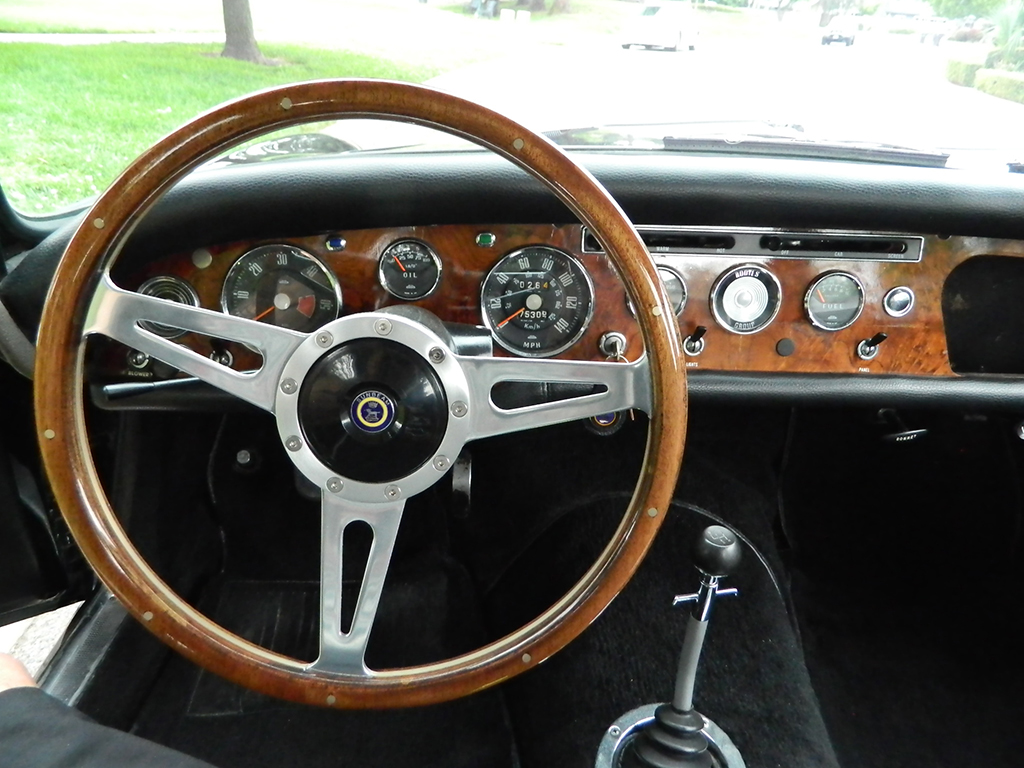 The dashboard of the Tiger is neat and functional with clean styling.

The black 1966 Mark IA Sunbeam Tiger in our pictures is coming up for auction by RM Sotheby’s at their Santa Monica auction to be held on June 24, 2017.

You can find the sale page for this car if you click here.

The Sunbeam Tiger, especially the Mark IA, is a great example of design work by Raymond Loewy and Ken Howes, with the V8 engine being shoehorned in by American legend Carrol Shelby. It is a great car with a fascinating history. 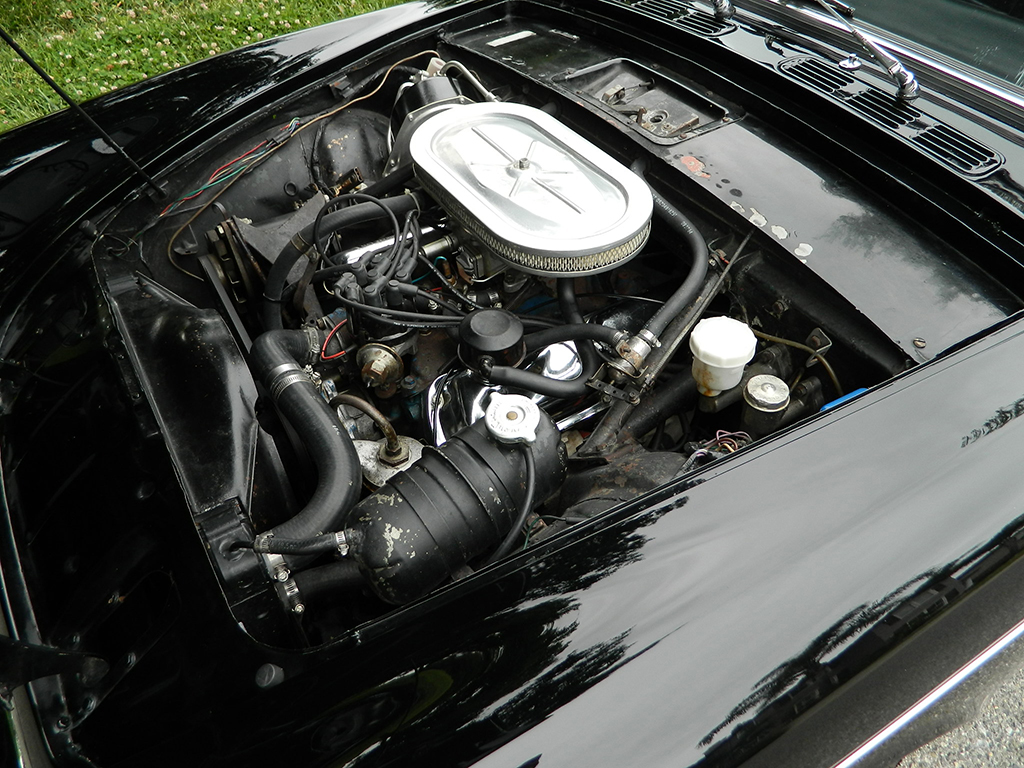