The Israeli Galil began life in a similar way to the rifle which was its ancestor, the AK47. The AK47 was created by Mikhail Kalashnikov when he was taken out of action by a shoulder wound in 1941 and other wounded soldiers commented to him that the Soviet Army could not provide a rifle per soldier, yet their enemy, the German Wehrmacht, were equipped with automatic rifles. Mikhail Kalashnikov did not try to re-invent the wheel when he created his AK47, he based it on proven designs, notably the German StG 44 and its adversary the American M1 Garand. Kalashnikov’s design proved to be so practical, and so reliable, that it became a standard against which the world’s other military weapons would be compared. And seventy years on the AK47 is still the military rifle that all others are compared with.

The AK47 “Kalashnikov” was the inspiration for the Galil “Balashnikov”.

The Galil had a similar beginning, and that beginning was during the Six Day War of 1967. Israel had a tradition of acquiring weapons from British sources which is why if you travel in Israel today you will notice security personnel, such as in hotel lobbies etc., commonly carry a Browing Hi-Power 9mm pistol, which was a British Army standard issue pistol. Similarly when Israel found herself under attack in 1967 her soldiers were predominantly armed with the Belgian FAL rifle, the then standard British Commonwealth military rifle as also used by Australia and New Zealand. The Belgian FAL was found wanting during the Six Day War in which it demonstrated a tendency to malfunction in the dust and sand of the desert warfare. Australian troops using the FAL in the Vietnam War discovered the same problems during the dusty dry season, and the solution back then was to clean all oil out of the action and lubricate it with powdered graphite. 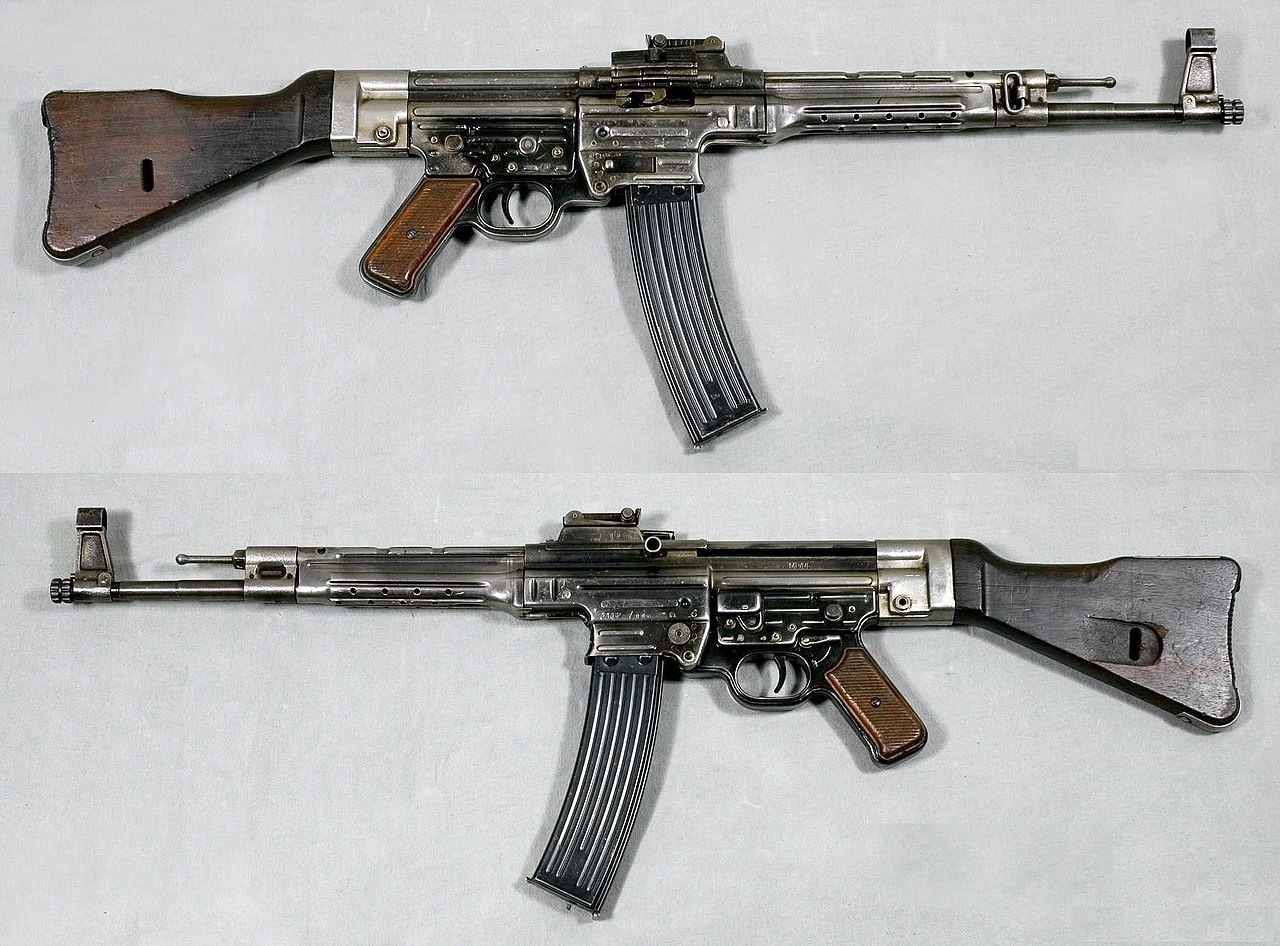 The German StG 44 and 43 were the rifles that paved the way for nations all over the world to adopt this style of “sturmgewehr” or “assault rifle” in the post war period. (Picture courtesy Wikipedia).

After the Six Day War Israel had captured large numbers of AK47 rifles from their Arab enemies and they set about evaluating the AK47 by comparison with the FAL. The AK47 came out as the superior weapon in many respects requiring much less maintenance and its being short light and easy to use. The FAL was a long and heavy full powered military rifle chambered for the 7.62x51mm NATO cartridge. The AK47 was a short light maneuverable rifle chambered for the less powerful 7.62x39mm Soviet cartridge, so it was significantly easier to use. With their evaluation pointing towards the need for a new rifle which would incorporate the advantages of the AK47 two Israeli designers, Uziel Gal and Yisrael Galil, got to work on proposed designs.

It was not going to be possible for Israel to simply adopt the AK47 for both political and practical reasons. Israel looked to the United States for military hardware and the US was not going to be supplying Soviet rifles and ammunition. The Cold War was extremely frosty during the sixties and so Israel needed to have her infantry kitted out with rifles firing NATO ammunition, not Warsaw Pact ammunition. A version of the AK47 was under development in Finland during the sixties and that was the rifle that the Israeli designers looked to for inspiration. That rifle was the RK 62 and it had entered service with the Finnish Army in 1962.

The Finnish RK62 was an improved variant of the AK47 and this was the rifle Uziel Galil used as the design base for the Galil. (Picture courtesy Wikipedia).

Both the AK47 and its parent the German StG44 were gas operated automatic rifles. Hitler had named the new automatic rifles “Sturmgewehr” which is translated into English as “storm rifle” and thence became “assault rifle”. Kalashnikov’s version formed the basis of the rifle designed by Yisrael Galil. Yisrael Galil’s original family name had been Balashnikov but many Israelis chose to change their names to reflect their Jewish homeland heritage leaving the northern European exile period behind them. Nonetheless Galil’s old name is sometimes attached to the rifle he designed, most likely for no better reason than it sounds a lot like Kalashnikov. 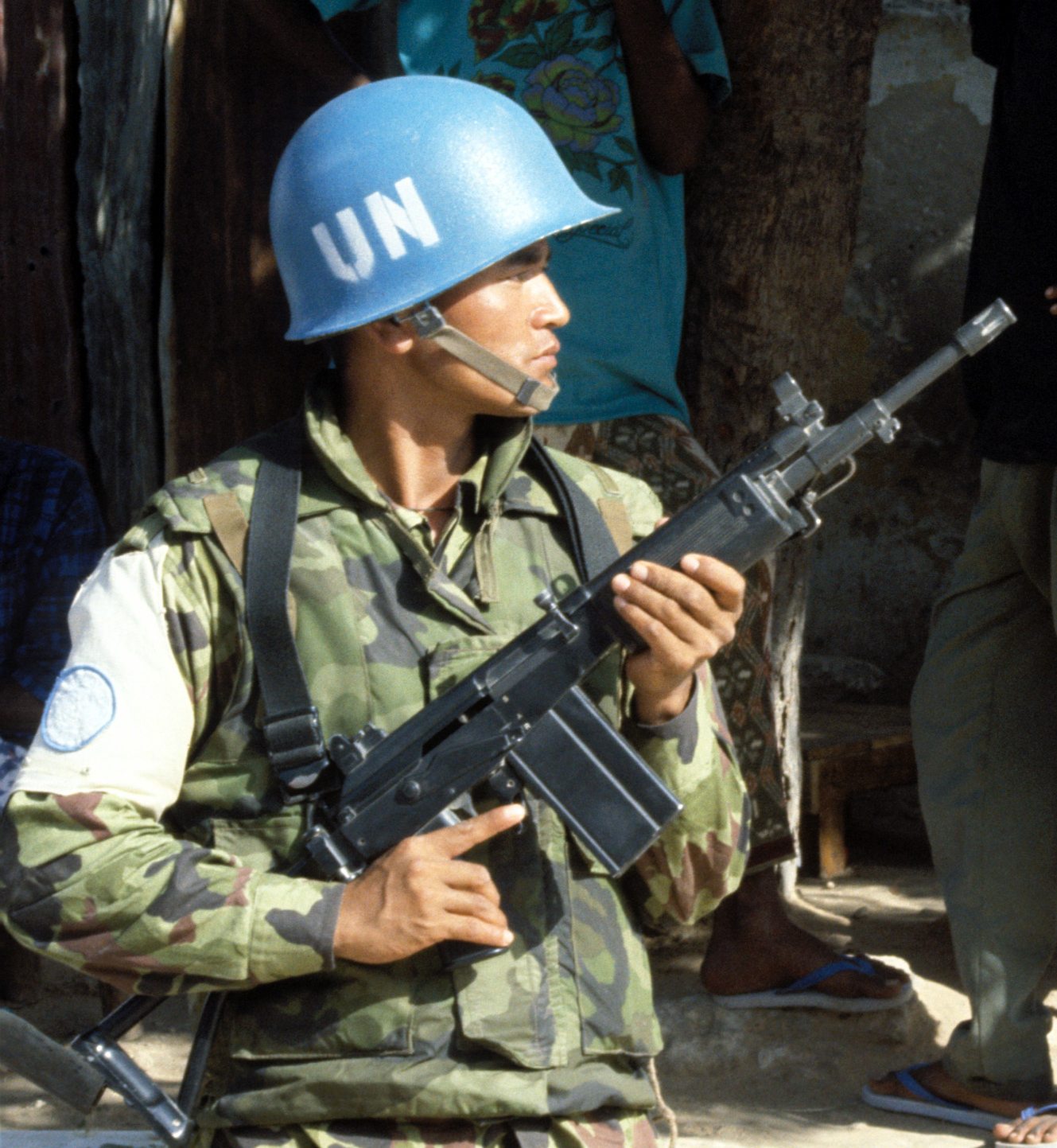 The Galil has been adopted by a number of countries. This UN peacekeeping soldier is Nepalese. (Source picture courtesy Wikipedia).

In construction the Galil is mostly based on the Finnish RK62 as can be seen in the picture above. The Galil trigger mechanism is based on the American M1 Garand whilst the gas operated action mechanism is Kalashnikov. The Galil uses the Kalashinikov style twin lug rotating bolt mechanism which is functioned by a piston and rod assembly carried in the cylinder above the barrel. When the weapon is fired the bolt remains locked to the barrel as the bullet passes along the barrel allowing pressures to progressively drop. After the bullet passes the gas port some of the high pressure gas vents into the cylinder above the barrel and pushes the chrome plated cylinder and rod mechanism to the rear. This drives the bolt carrier rearwards and during this motion a cam slot in the bolt carrier engages a cam pin on the bolt and rotates the bolt causing it to unlock from the barrel and allowing it to open and eject the fired cartridge case. A mechanically simple and rugged design which has proven to be dependable. One aspect in which the Finnish RK62 and the Galil improve on the AK47 is in the use of a milled forged steel receiver instead of a pressed metal one. This adds to the weight of the rifle but ensures against the cracking that AK47’s can be prone to. 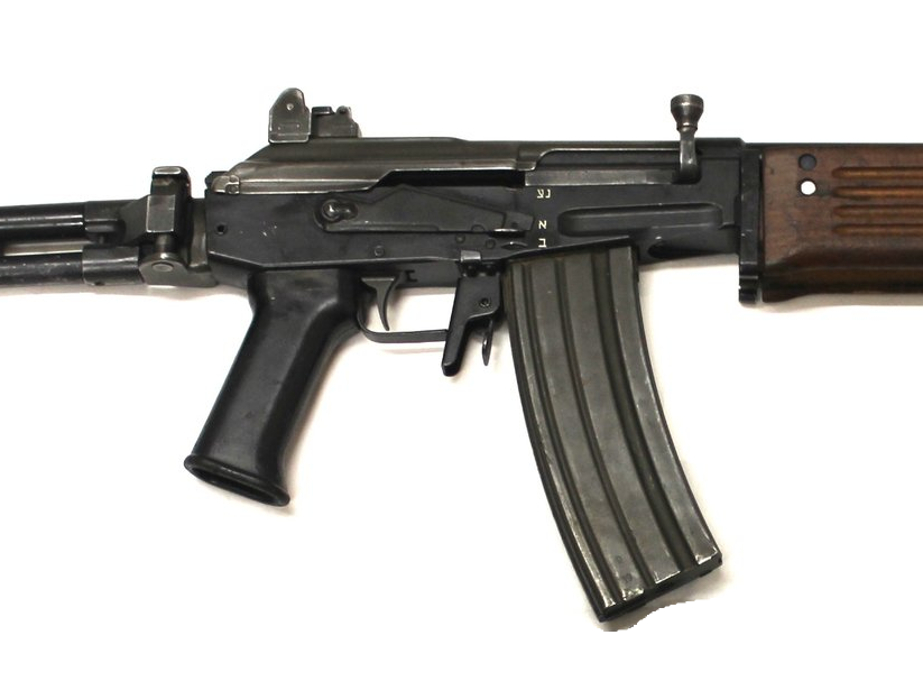 Operation of the Galil is much the same as for an AK47. On the right side of the receiver is the safety and fire selection switch which provides for safe, semi-automatic and automatic fire. Like the AK47 the magazine is inserted front first and the magazine release is visible in the pictures above and below. The cocking handle is bent upwards so it can be operated with either hand, so a right handed shooter can retain their hold on the pistol grip whilst functioning the action. 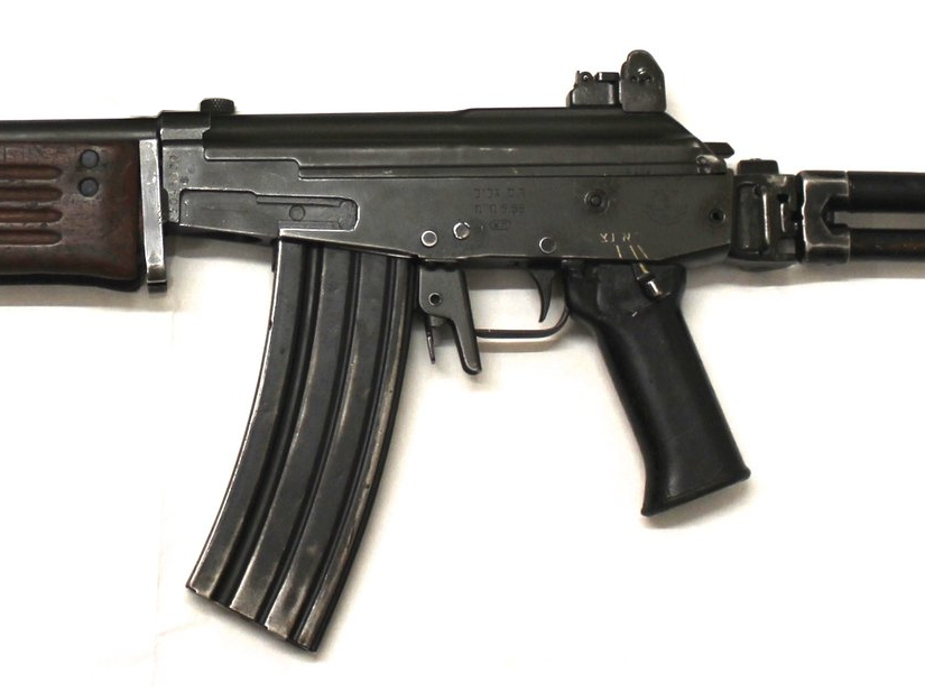 Action left side. There is a small and convenient fire selector switch on the left side of the action for ease of use. (Source picture courtesy mjlmilitaria.com).

On the left side of the Galil’s action just above the pistol grip the fire selector is duplicated with a thumb switch. When the switch is fully to the rear the rifle is in semi-automatic mode, in the middle position it is in full automatic mode, and when pushed to the full forward position it is on safe.

The Galil AR is the basic version which can be regarded as the standard. The rifle is made in 5.56x45mm NATO and has a plastic fore-end. The model fitted with a folding stock which is folded by pressing the stock vertically down and then folding.

The Galil SAR is otherwise known as the Glilon and was created for use in vehicles such as with the armored corps. The SAR has a short 13.07″/332mm barrel which means it also has a shorter gas tube and piston assembly. This rifle is also made in 5.56x45mm NATO.

The Galil ARM was made in both 5.56x45mm NATO and in 7.62x51mm NATO. This model is fitted with a wooden fore-end to better insulate against barrel heat and is fitted for a front bipod. The ARM was intended for use as a squad light machine gun. 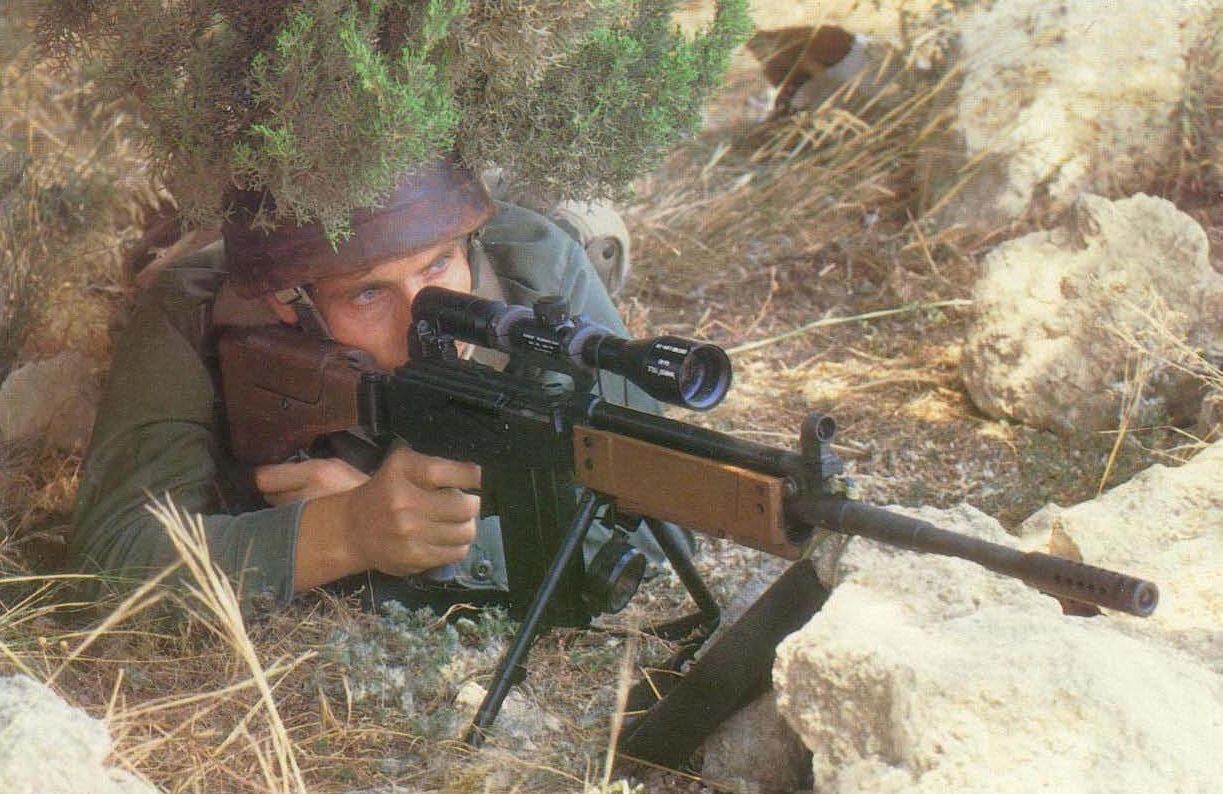 Galantz sniper rifle version of the Galil. Note riflescope is offset to the side so the open sights remain easily accessible. (Picture courtesy Valmet).

Galantz is a shortened form of “Galil Tzalafim” (Galil Sniper). This rifle was made in 7.62x51mm NATO and fitted with a different bi-pod by comparison with the ARM. The Galantz was fitted with a Japanese made Nimrod rifle-scope of 6x (Note: a 10x was also made), with the rifle-scope being mounted in offset mounts so the open sights remain instantly usable without the need to detach the rifle-scope. The rifle-scopes were made in Japan under contract with Israeli company Koor Industries. The Galantz came in a padded fitted bag and the folding wooden stock was designed for sniper use with a range of adjustments available.

You can find the full owners manual for the Galantz at the Valmet website if you click here. 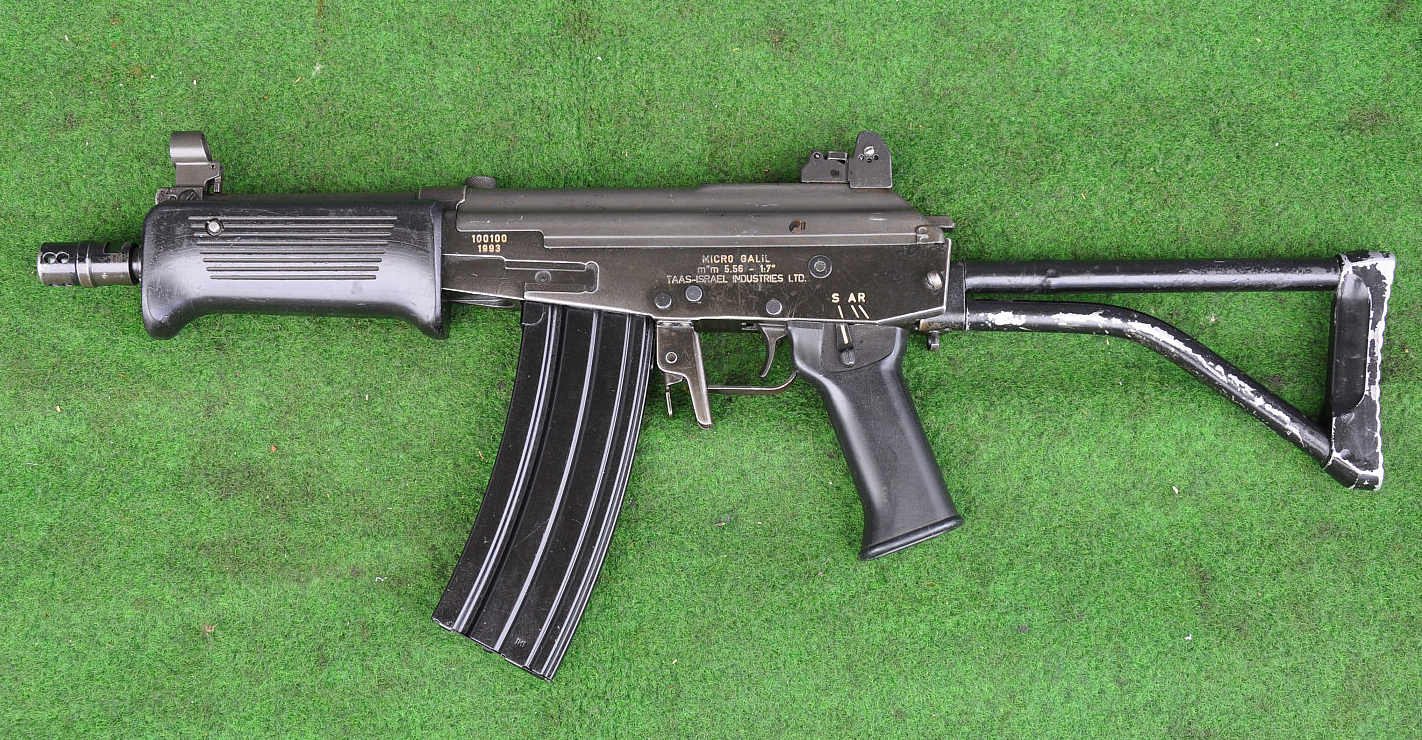 The Galil MAR is the “Micro Galil” and was a significant re-design of the original Galil. The MAR has a very short 8.27″/210mm barrel. This new model was introduced in 1994, even as the Galil was being phased out in favor of American M16 rifles. The weapon’s very small size makes it ideal for vehicle based troops, police, and for special operations. The MAR has a number of interesting features. The magazines can be clipped together to help increase magazine change speed, and an adaptor was made that enabled the MAR to use standard M16 magazines.

The Galil ACE is a new version of the Galil that uses polymer parts in the action with steel upper carrier to dramatically reduce weight. This construction is similar in style to many modern military arms including the Austrian Steyr AUG and the Australian Lithgow F90. The ACE is made in Micro, SAR and AR models and in 5.56x45mm NATO, 7.62x51mm NATO and 7.62x39mm. 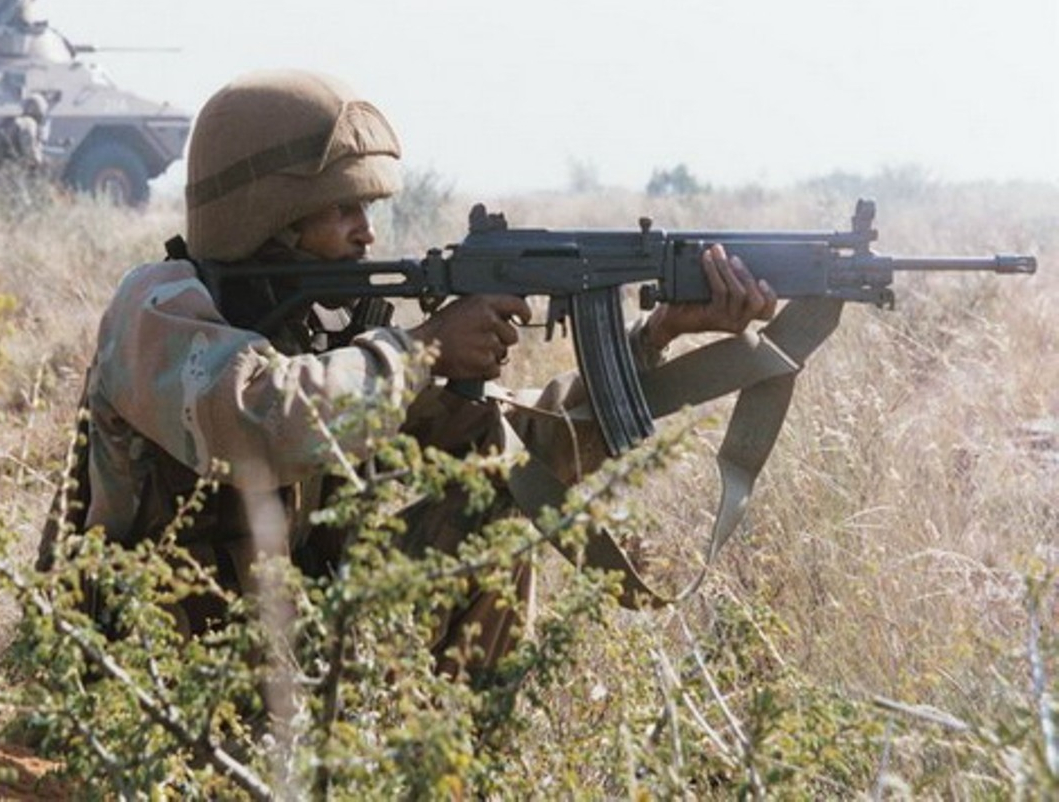 The Vektor versions of the Galil made for South Africa are as follows: 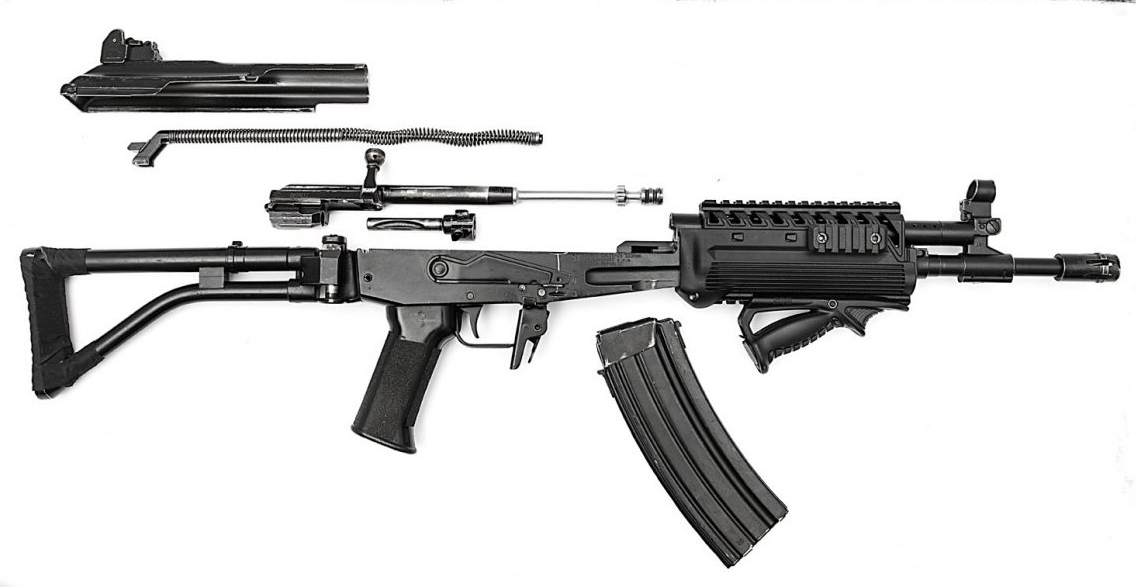 Israel has a long history of needing practical and reliable weapons for its people because of the situation she finds herself in, essentially surrounded by not so friendly neighbors. Born out of the Six Day War, when some of those neighbors decided to try to eliminate Israel, the Galil was designed and made by people who understood war and the needs of the combat soldier from first hand experience. There were many who fought in the Six Day War who had experienced the Second World War, including many who were concentration camp survivors and had experienced the helplessness of being a disarmed people in the face of a murderous enemy. The people of Israel are determined not to be placed in such a disarmed or helpless condition again and through compulsory national service and maintaining an arms industry with a high level of expertise they have been ensuring that for decades.

The Galil stands out even in this twenty first century as one of the best combat rifles ever made. If one had to go into a life and death situation then a Galil would be an excellent rifle to go armed with.