The Browning .22 Semi-Automatic rifle entered production way back in 1914 and this chirpy little centenarian is still in production. This fact alone is testimony that John Moses Browning got it right with this design, just as he’d got it right for so many of his previous firearm designs.

(To see the sale page for the above rifle click here).

The Browning .22 Semi-Automatic rifle was the world’s first semi-automatic .22 rifle and it was made with a tubular magazine in the butt stock. The rifle was made in two models, one for the .22 Short, and the other for the .22 Long Rifle cartridges. The tube magazine held 16 x .22 Short or 11 x .22 Long Rifle cartridges. Early models up into the 1960’s came as a standard rifle, with a very thin fore-end, no checkering, and no engraving, and a De-Luxe model with modest engraving on the sides of the receiver and a more hand filling beaver-tail style fore-end. The rifle pictured above is typical of the De-Luxe model.

The Browning .22 semi-automatic rifle is a take-down rifle. Note that the rifle-scope is mounted on a cantilever mount attached to the barrel, not the action.

(To see the sale page for the rifle pictured above and below click here).

John M. Browning’s attention to detail is evident in all aspects of this diminutive rifle’s design. It is made as a take-down rifle; the latch visible at the bottom of the receiver adjacent to the fore-end is pressed forward whilst the breech block is pulled to the rear sufficiently to ensure the extractor is clear of the barrel. That unlocks the barrel which can then be rotated through 90° and removed. Making the rifle as a take-down made it able to be packed into a small bag or case and transported by bicycle or on public transport to the place the user was to go shooting. Back in 1914 few people had motor vehicles and so being able to transport the rifle by bike, horse or train was a useful feature. It also made the rifle easy to field strip and clean, and being taken-down, completely safe to transport.

This scoped Browning .22 semi-automatic comes with a carry case.

Browning thoughtfully made his .22 semi-automatic rifle suitable for both right and left handed shooters by placing the ejection port at the bottom of the receiver. Spent cartridge cases are ejected downwards which is convenient, although an occasional hot little .22 case can eject into one’s sleeve. If bunny shooting from a vehicle the cases tend to finish up in your lap which is fine.

With the barrel removed the take-down system is clearly visible. The action has a half thread that engages the barrel half screw. The system is held in place by the locking latch and tension is adjusted by the collar on the barrel. (Picture courtesy Wikipedia).

For full disassembly instructions you will find the factory manual for the rifle if you click here.

You can also find a copy of the old manual if you click here.

Earliest models of the Browning .22 Semi-automatic featured a loading port for the tube magazine at the top of the butt-stock but this was changed to a side port early in production. European production was by Fabrique Nationale in Belgium, whilst in J.M. Browning’s native United States the design was licensed by Remington and became their Model 24 from 1919-1935 and then the Model 241 from 1935-1949. The Model 24 had a bottom mounted deflector to ensure spent cases did not finish up in a shooter’s sleeve.

(To see the sale page for the rifle pictured above click here).

Apart from the hiatuses caused by war the Browning .22 Semi-Automatic remained in production in Belgium until 1974 with production moving to Miroku in Japan in 1976. These rifles were not imported into the United States until 1956,  after Remington production of their versions had ceased.

(To see the sale page for the above rifle click here).

These small handy rifles tip the scales at 5lb 3oz and have a 19 3/8″ barrel. The stock style of the older models features quite a lot of drop at comb and this has mostly been retained on the current production rifles. Current rifles have a drop at comb of 1 3/16″ and a length of pull of 13 3/4″.

Current production rifles are nowadays called the Browning SA-22. This is the standard Grade I model. (Picture courtesy Browning).

Current production rifles are called the Browning SA-22 and they come in three grades; Grade I, Grade IV Blued, and Grade IV Grayed. Magazine capacity is nowadays listed as 10 rounds and the stock wood is American Walnut.

The Grade IV SA-22 is available with either blued or grayed receiver. (Picture courtesy Browning).

Some people say “They don’t make ’em like they used to.” But in the case of the Browning SA-22 that saying does not hold because they do make ’em like they used to. John M. Browning’s light and handy little .22 has stood the test of time and it’s entirely likely that this rifle will still be in production in a hundred years from now. They’re such a great rifle we certainly hope they do. 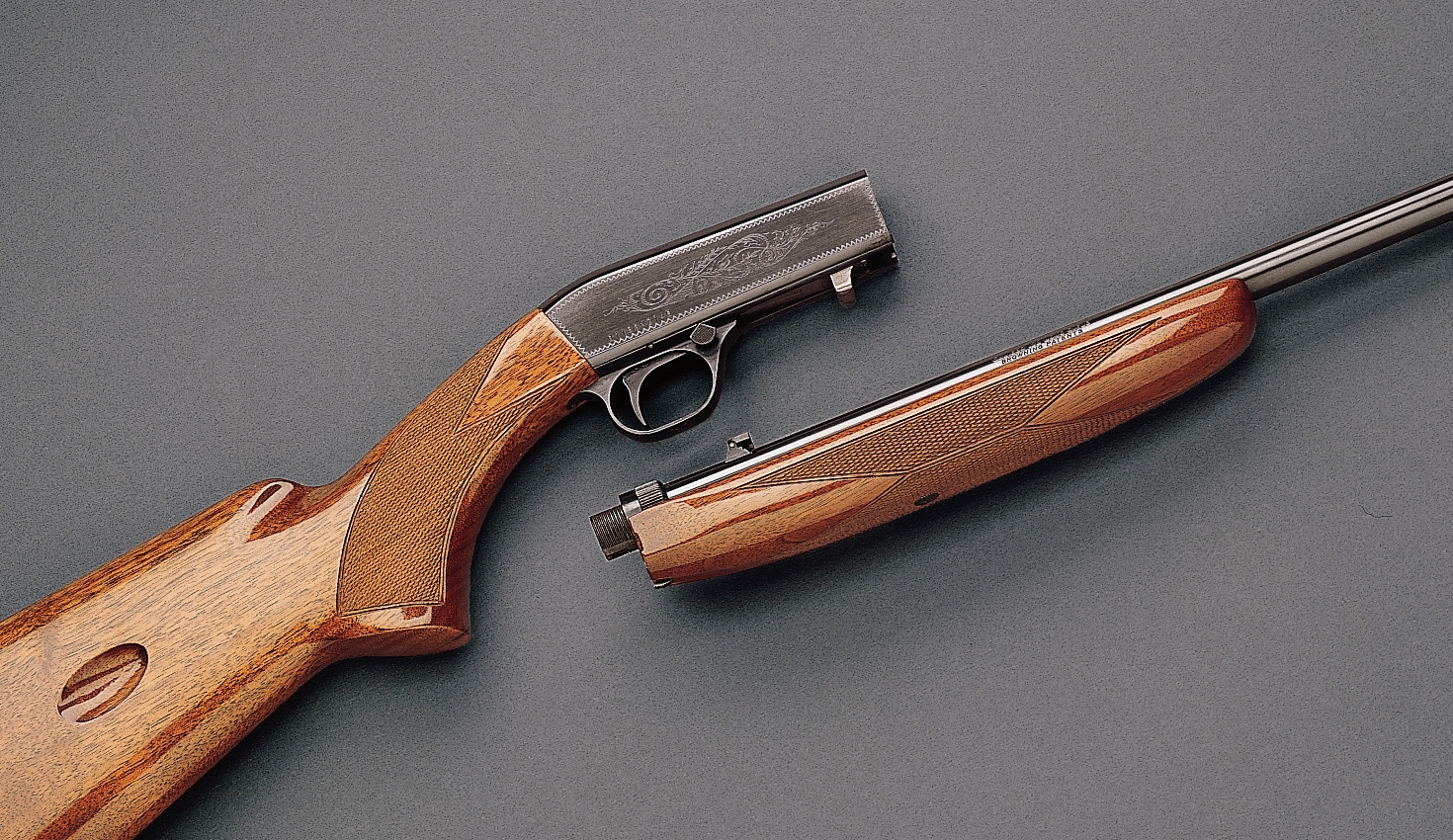