An Alfa Romeo 4WD off road vehicle? Some will struggle to wrap their head around this seemingly contradictory concept. Perhaps that’s how the car earned itself the nickname the “Matta” which is Italian for “mad” or “crazy”. In the post war 1950’s whilst people in Britain were still on war time rationing there was austerity all around, something that the United States was spared. In this environment a fast luxury car maker such as Alfa Romeo would be having difficulties marketing their fast and fun motorcars. So when the Italian military with a burst of typically adventurous Italian imagination suggested that they should build a “Jeep” like car for them then the people all said “Molto bene” and the Chianti glasses chinked as they toasted the project. Just think, an Alfa Romeo 4WD, they might even enter one in the Mille Miglia, and it might just win. 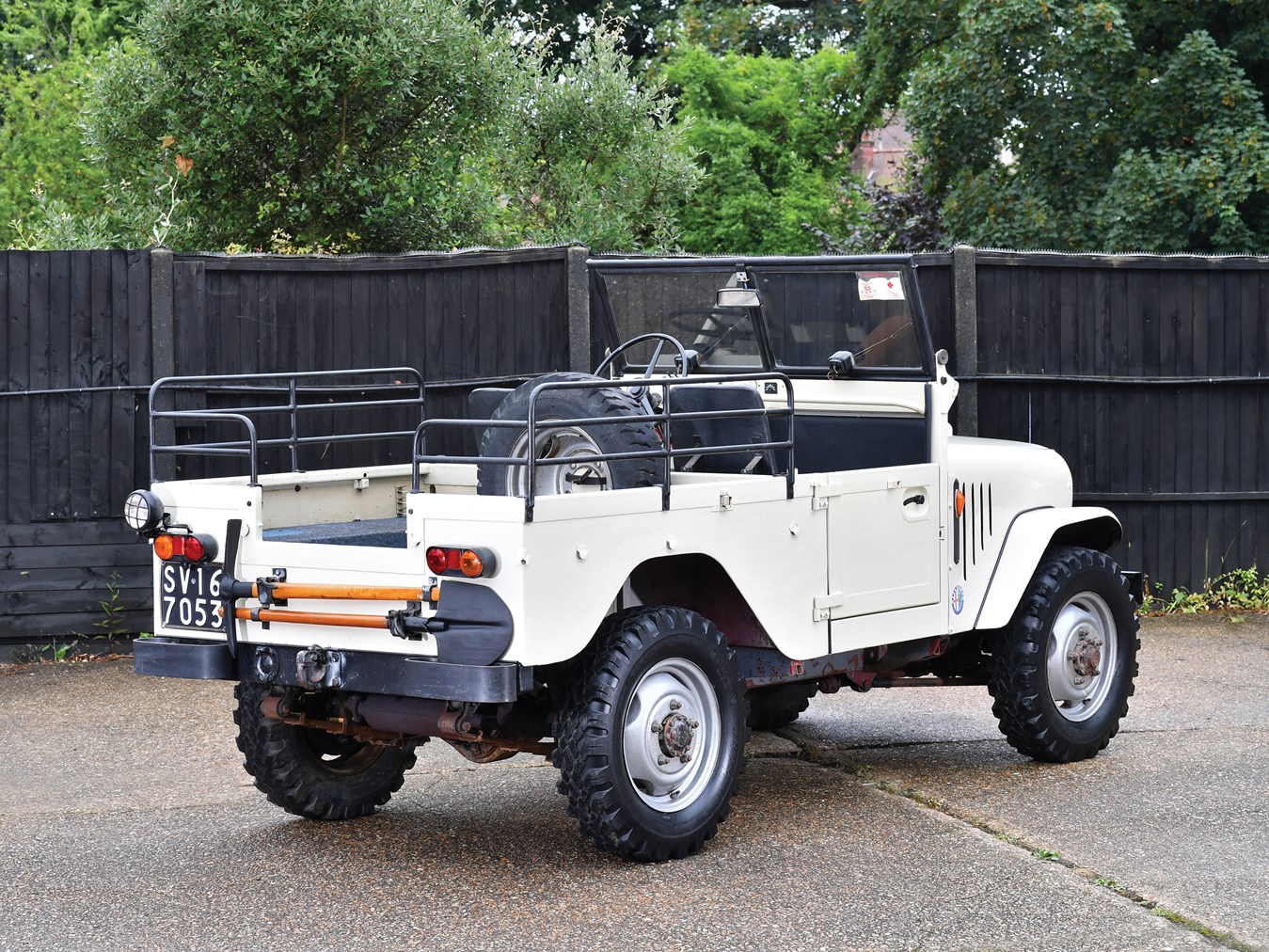 The Alfa Romeo 1900M 4WD may bear some similarities to the American Jeep and the British Land Rover but it is an original design nonetheless.

There were plenty of American Jeeps around and so the first prototype was created by the simple expedient of dropping an Alfa Romeo 1900 engine into one. With some de-tuning the engine worked rather nicely and the proof of concept was established. 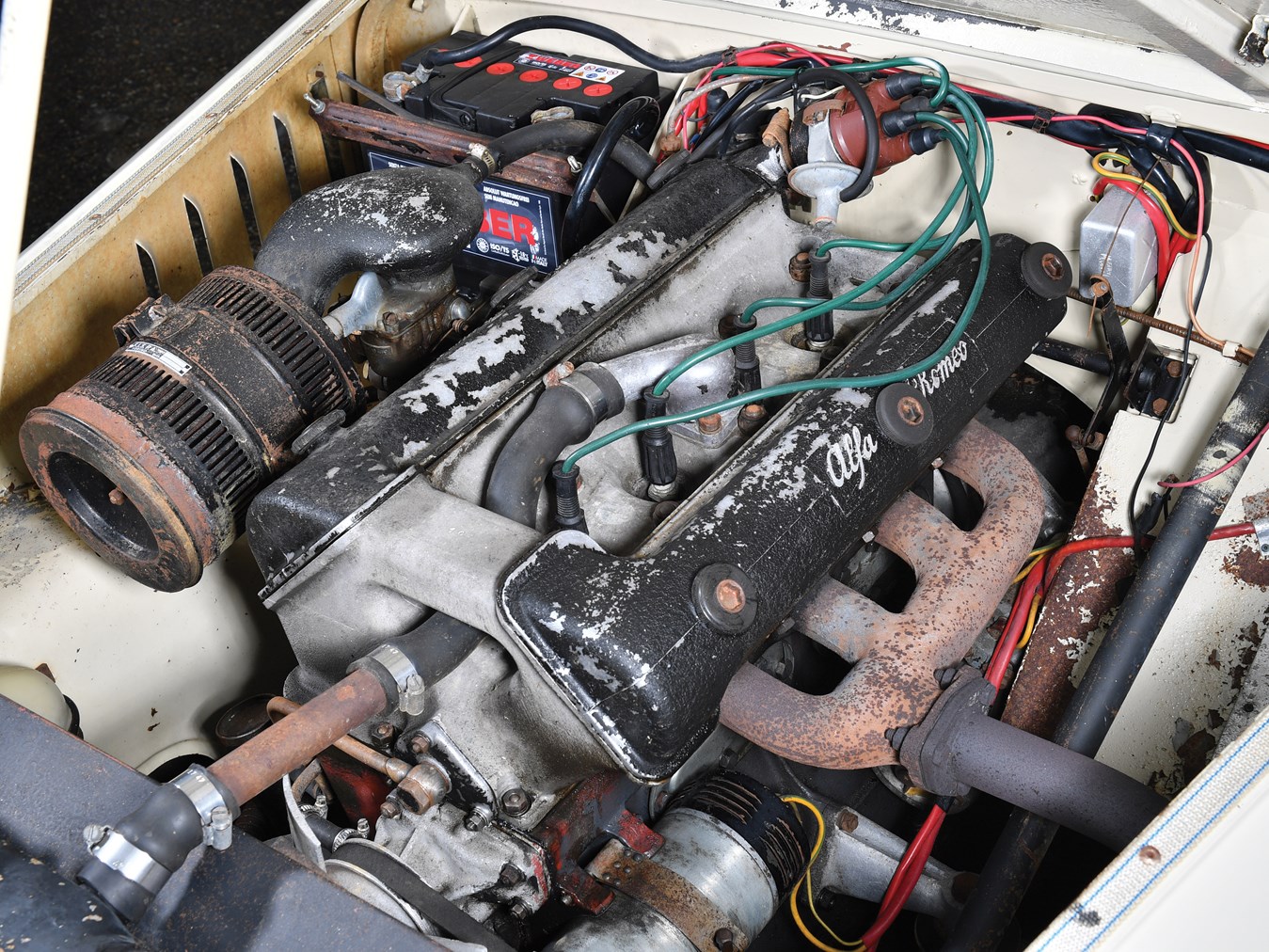 The sight of a DOHC Alfa Romeo 1900 engine is not exactly what one expects to see upon opening the hood of a utilitarian 4WD.

The DOHC Alfa Romeo 1900 (1884cc) in-line four cylinder engine was a well established power plant being used in Alfa Romeo 1900 police cars and quite a number of other models. In its normal specification for use in cars the engine produced 90bhp. In order to make it more utilitarian the engine was de-tuned to produce just 64bhp making it less stressed and theoretically more reliable. The engine featured double camshaft chains and dry sump lubrication. The engine’s cylinder head was alloy with hemispherical combustion chambers and the engine block cast iron.

Although the design team at Alfa Romeo started out thinking Jeep they wisely didn’t stay in that ideological box. They also looked hard at the new British Land Rover and got some good ideas from that, and they did some original thinking. They decided that the vehicle would be best served with a fully independent front suspension using double unequal length wishbones whilst sticking with the tried and true live axle on leaf springs for the rear. 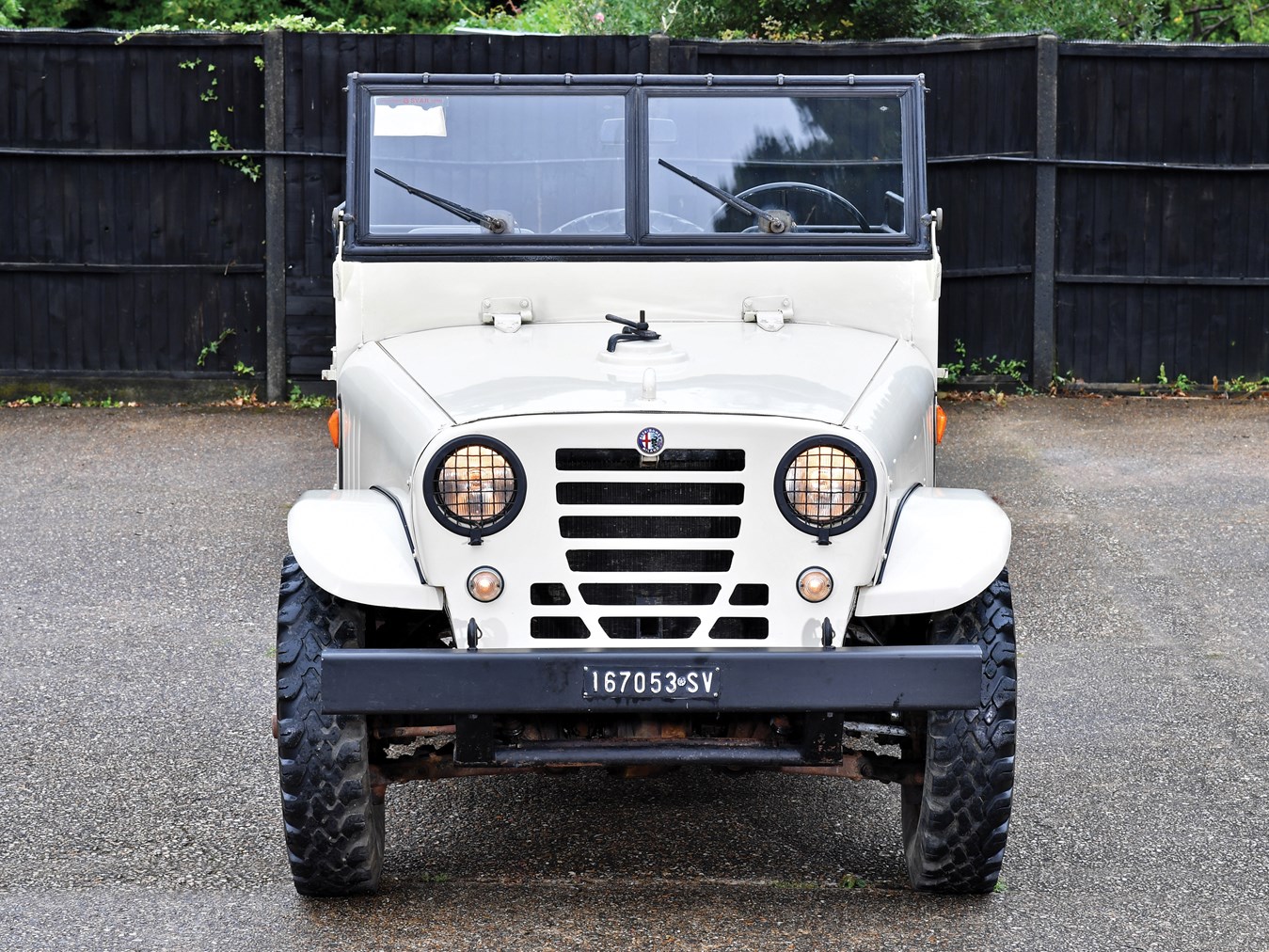 Although the Jeep was a great 4WD the design team at Alfa Romeo saw that there were things that could be improved on. The Alfa Romeo 1900M was given a fully independent front suspension.

In terms of size the wheelbase was set at 86.6″ which was very similar to the Land Rover which was 80″ from 1948-1953 and grew to 86″ in 1954, the year the Alfa Romeo 1900M ended production. The vehicle was fitted with a four speed gearbox with a low range/high range transfer case. The handbrake was mechanically operated and mounted on the drive shaft similar to the Land Rover whilst the brakes were hydraulic drums front and rear. 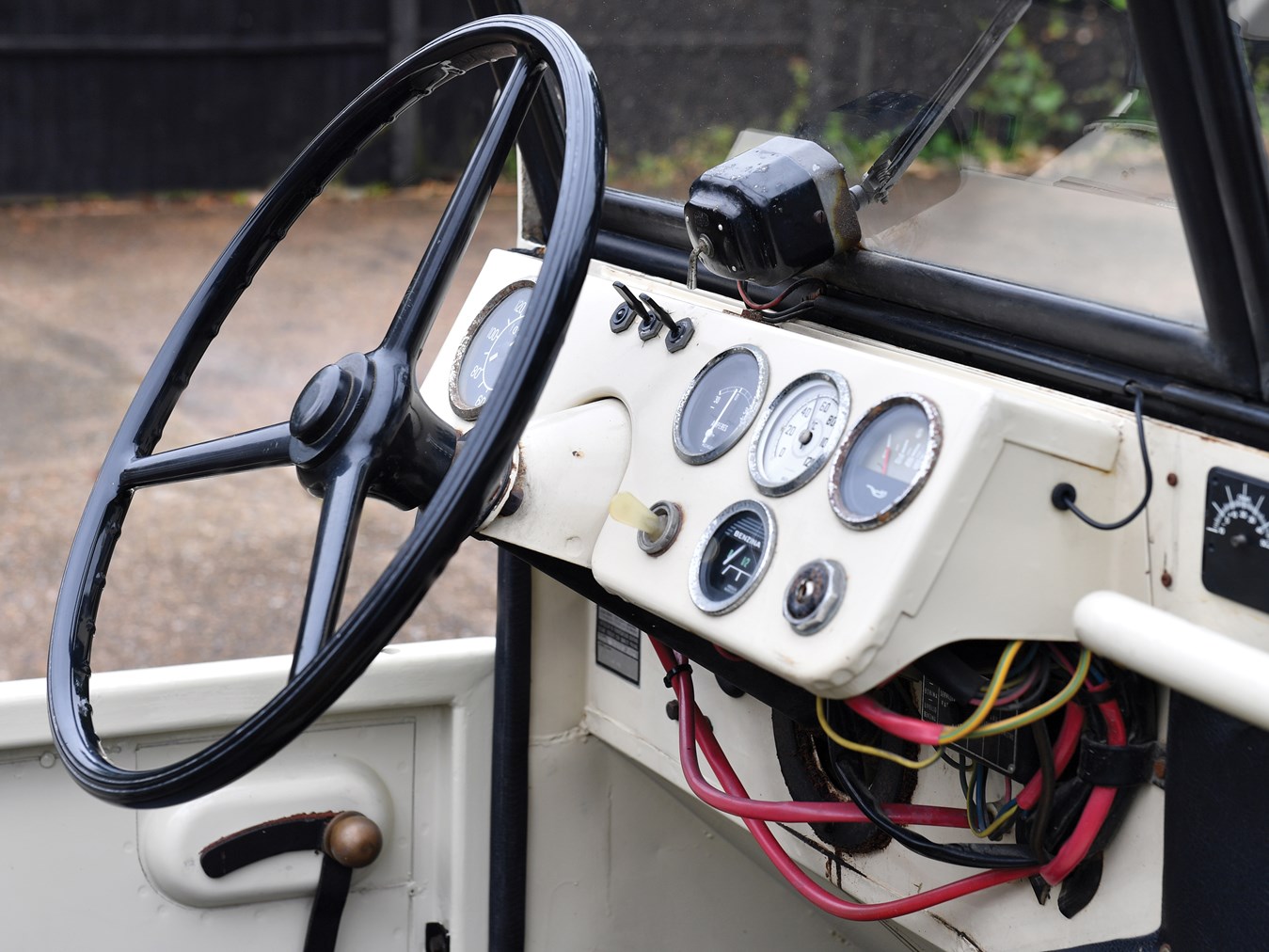 The interior of the Alfa Romeo 1900M was as spartan as one would expect on a utilitarian military/agricultural vehicle.

The interior of the Alfa Romeo 1900M was kept austere and serviceable. Seeing wiring hanging underneath the dashboard seems to be common, It makes getting to the wiring easy but could stand some tidying up. The doors were of the rear opening “suicide” type and could be clipped open if desired. Very handy for a silent exit from the car if you are in the deer woods with your trusty 30/06 and stumble across a fresh rub tree by the side of the track. 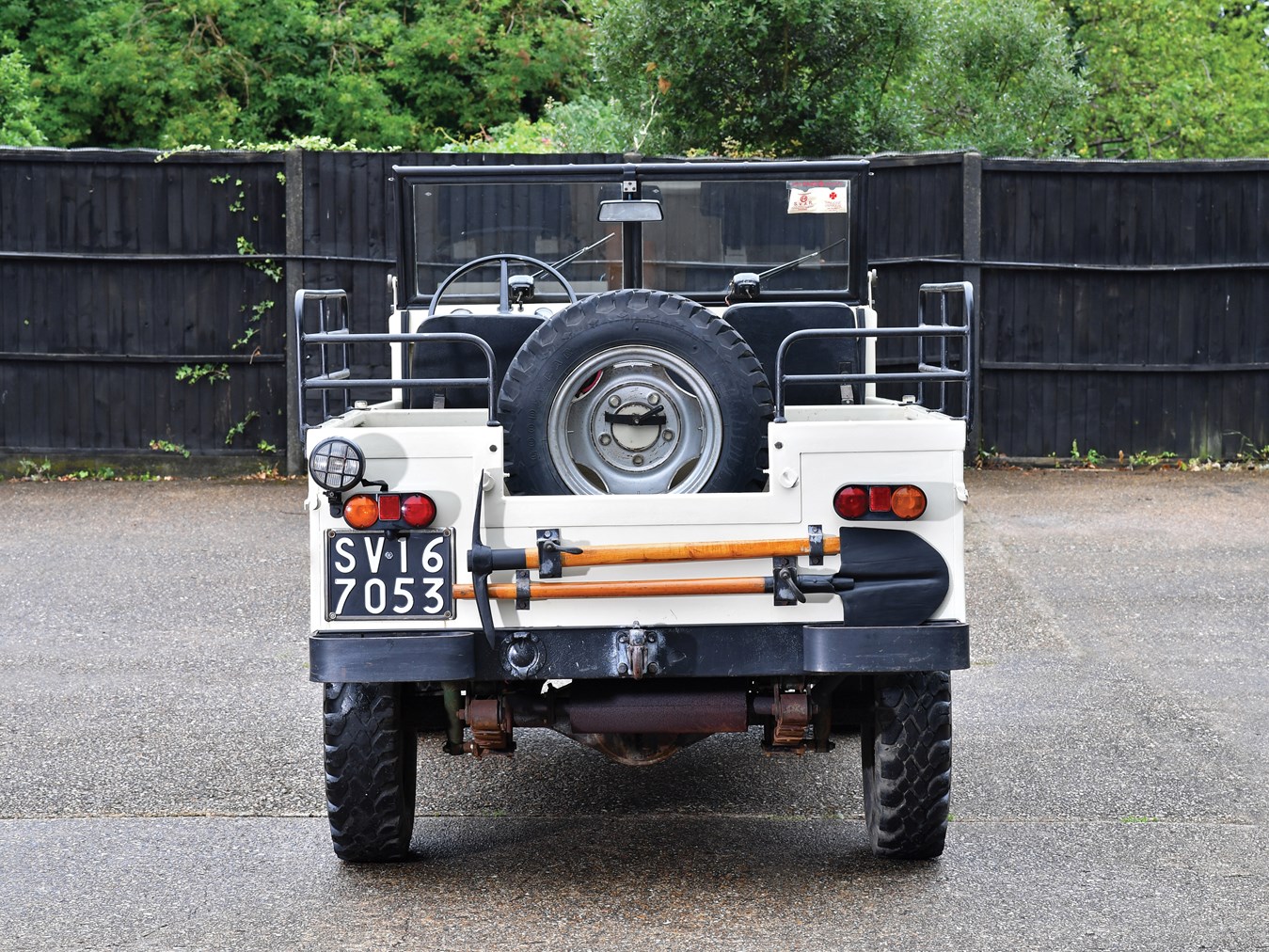 The Alfa Romeo 1900M was made in military and civilian versions. The military version has a shovel and pickax mounted at the rear.

The Alfa Romeo 1900M was made in both military and civilian versions. The military version being the AR51 and the civilian the AR52. Both versions are nearly identical although civilian models were sometimes given special equipment. The AR51’s special equipment was pretty much limited to a shovel and pickax mounted at the rear for digging one’s way out of sticky situations. The AR stands for Autovettura da Ricognizione which translates as Reconnaissance Vehicle.

The Alfa Romeo 1900M prototype was evaluated by the Italian Army’s representative Colonel Garbani in April 1951 and on the basis of his recommendations the design was improved, re-submitted, and approved. It was during this time that the then Alfa Romeo Managing Director engineer Antonio Alessio saw the AR51 being demonstrated and he christened it the “Matta” (i.e. “crazy”). 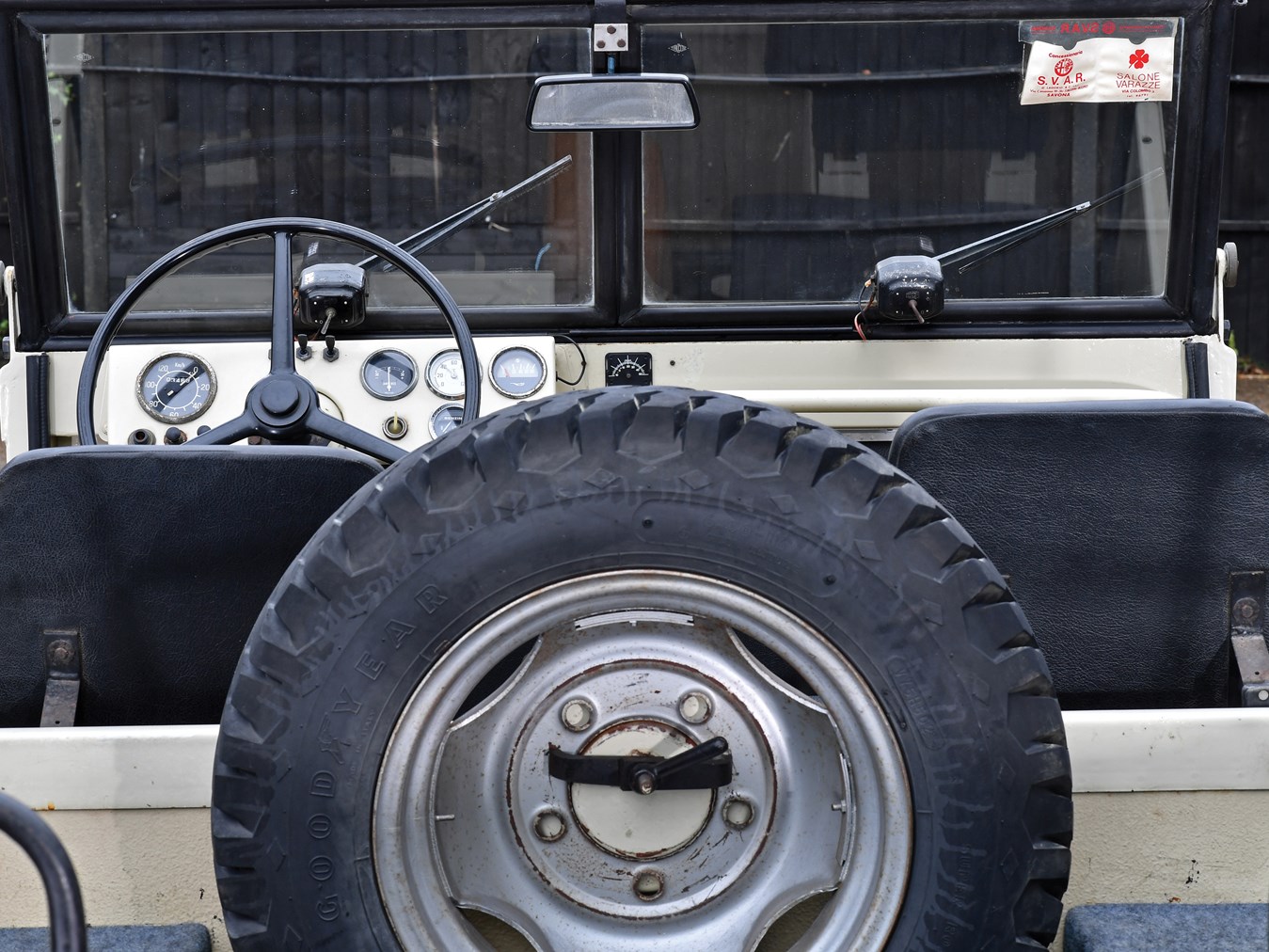 As a cross between a Jeep, a Land Rover and an Alfa Romeo this is a surprisingly sophisticated little 4WD.

Being a bit “crazy” two Alfa Romeo 1900M were entered in the 1952 Mille Miglia in the Military Vehicle class. One failed to finish whilst the other won. Their main competition was from the Fiat Campagnola 4WD which was their main competitor for the supply of 4WD vehicles to the military. The Alfa Romeo may have obtained the class win in the Mille Miglia against the Fiat but ultimately it lost the sales competition and after only 2007 vehicles were sold to the army and 154 to the civilian market between 1952-1954 the army decided that they would only buy the cheaper Fiat Campagnola and thus production of the Alfa Romeo 1900M was brought to an end. 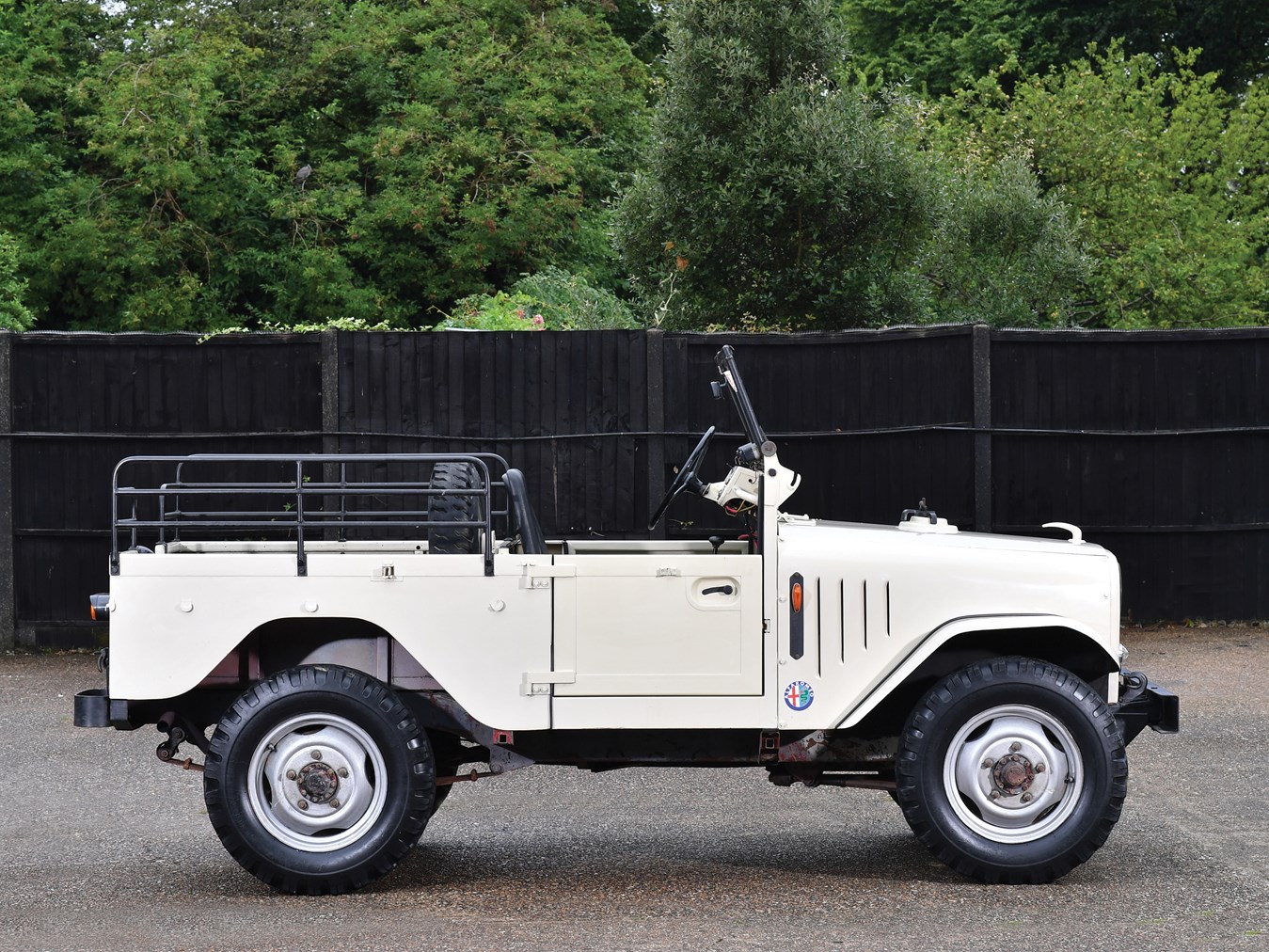 As utilitarian as the AR51 looks the Alfa Romeo badge on the side gives it a certain touch of class.

The AR51 was used in some challenging international endurance trials including the Vatican to Peking and the Bonzi Expedition to Indonesia. Great little car that they are, with only 2,161 cars made and the vast majority of them in Italy these are a rare find for sale anywhere in the world. The white AR51 in our photos is coming up for sale by RM Sotheby’s at their London Sale which is to take place on 7th September 2016 in London, UK.

This is one of those exotic 4WD that we might lust after but unless it was put back into production would be unlikely to ever own. A hunting vehicle needs to be reliable and that means there needs to be a good supply of spare parts freely available. However, with the Land Rover going out of production perhaps there is an opening for this easy to fix little “mad” car once again. It even has provision to carry two spare tires, one behind the front seats and another on the hood. It only tips the scales at 2,755.8 lb (1,250 kg) so it should be quite lively and easier to winch out of serious trouble than most things.

I think this is one of the most interesting little cars Alfa Romeo has ever made – but I just love four wheel drives. How about you? 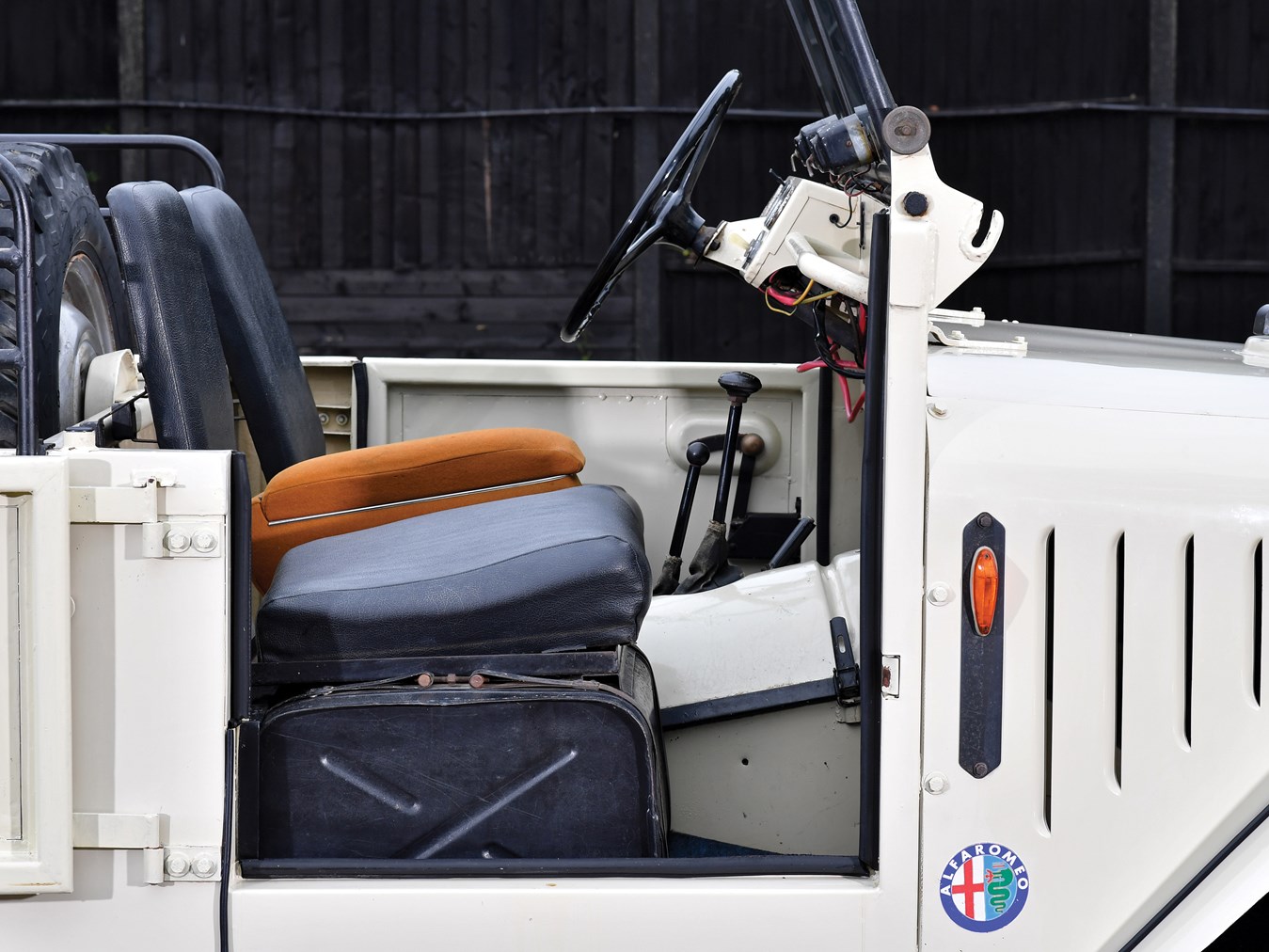