The establishment of the small arms factory in the Australian town of Lithgow was originally motivated by a realization by Australia’s colonists that the world is actually not a “safe space” and that being dependent on supply of arms from Britain, which was a very long sea voyage away, was not wise. Lithgow was a coal and iron mining town located away from the coast in the Blue Mountains of the state of New South Wales and as such had the ingredients needed for a viable arms factory with not only a ready supply of local raw materials but also well developed rail connections to the rest of Australia.

Work began on construction of the factory in 1908 and it was completed in 1912. This was timely because although the government, aided by the press, were not willing to admit that a major war was likely yet ordinary Australians could see the writing on the wall. It was in 1907 that Australian poet Henry Lawson published his “Every man should have a rifle” as a warning that a great war was brewing.

Every Man Should have a Rifle

So I sit and write and ponder, while the house is deaf and dumb,
Seeing visions “over yonder” of the war I know must come.
In the corner – not a vision – but a sign for coming days
Stand a box of ammunition and a rifle in green baize.
And in this, the living present, let the word go through the land,
Every tradesman, clerk and peasant should have these two things at hand.
No – no ranting song is needed, and no meeting, flag or fuss –
In the future, still unheeded, shall the spirit come to us!
Without feathers, drum or riot on the day that is to be,
We shall march down, very quiet, to our stations by the sea.
While the bitter parties stifle every voice that warns of war,
Every man should own a rifle and have cartridges in store!

From the Lithgow factory’s establishment until the outbreak of The Great War was a short two years.

Since that time the Lithgow Arms factory has been almost continuously involved in making arms for Australia’s military from the Short Magazine Lee Enfields of the First and Second World Wars and the Belgian FN FAL known in Australia as the “SLR” (Self Loading Rifle) of the Vietnam War to the rifles of the present day.

By the early 1980’s Australia understood it needed to upgrade its existing 7.62 NATO SLR rifle and so they went shopping around the world with a very specific idea of exactly what they wanted to buy. The rifle that met the Australian government’s requirements, that included that it be manufactured at the Lithgow Arms factory, was the Austrian Steyr AUG, and by the mid eighties the Austeyr was in production and being phased into service. By the late eighties the Australian modified version was the F88 Austeyr and this rifle was the parent of the next generation, the Lithgow Arms F90.

The Lithgow Arms F90 departs from the design of the original Steyr AUG in modest but important ways. The rifle has an ejection port deflector that enables its used either right or left handed if that is needed and is designed so that the user can keep their master hand on the grip and accessible to the trigger if the weapon jams and requires manual cycling.

The F90 retains the same basic operating system as the original Steyr AUG with its twin guide rails and short stroke gas operating system. A significant departure however is the removing the AUG’s interchangeable barrel system and replacing it with a system that keeps the fluted hammer forged barrel in a unit with the upper receiver. The upper and lower receiver are made so they can be easily separated without tools which also makes cleaning a breeze. When the barrel is to be swapped the barrel/receiver assembly is swapped with whatever sighting system happen to be on them. The advantages of this are that the system stays zeroed and the rifle has been made a tad lighter partly from omitting the barrel swap system and partly from fluting the barrel which serves both to reduce weight and increase cooling surface area.

The F90 has three main Picatinny rails; one on top of the weapon that will tend to be used for sighting devices, one on the side for laser and illumination devices etc., and one under the fore-end for grenade launcher or additional vertical hand-grip etc. The gas operating system comes with a two position regulator that can be used for adverse conditions and can also be useful if changing ammunition type, such as when using a suppressor for example.

The F90 is created as a result of a couple of decades of Australian military use of the Steyr AUG/F88 in real world situations and it represents a refinement of an originally good design to try to make it as close to perfect as it can be.

The following video is made by Lithgow Arms and demonstrates some of the major features of the rifle in action.

The Lithgow Arms Atrax is the fully civilian version of the F90 made as a semi-automatic rifle that can be used as a “modern sporting rifle” or as a defensive or survival rifle, or for rifle target competition. The F90 Atrax has all the ergonomic and practical features of the military rifle with the singular exception of the fully automatic capability. As a vermin control rifle this is one that would be hard to beat. Similarly in something like Practical Rifle competition it will also be hard to beat, partly because of its excellent ergonomics, and partly because its trigger is rather better than is usually found on semi-automatic rifles. Its not the quality of a Winchester Model 70 “breaks like a glass rod” but its better than most.

For a really good video review this one from iraqveteran8888 is both informative and fun. It will likely get you checking your account balance and seeing if you can acquire one of these great little bull-pups for yourself.

Australia is a long way from world markets and as a consequence it can’t really manufacture products that are cheaper, so they have to make products that are top shelf that will sell despite their slightly higher price. If you are looking for a rifle that merges great design with top quality control then Lithgow Arms from “Down Under” are rifles to check out.

And you’ll find the F90 brochure if you click here. 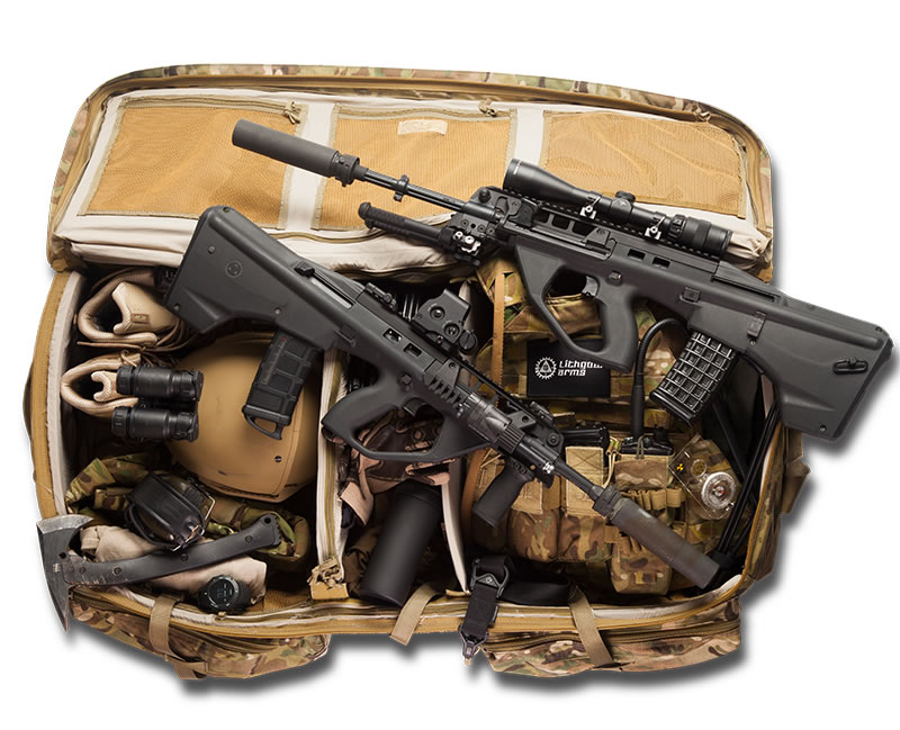 (All pictures courtesy Lithgow Arms except where otherwise marked).

To Build a Morgan