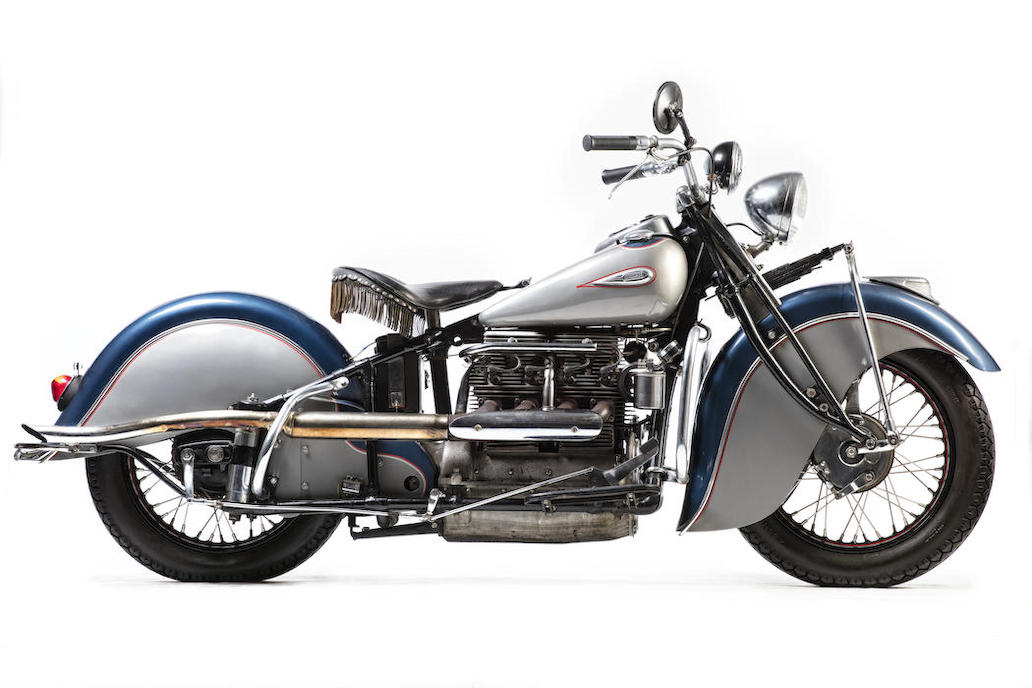 1940 Indian 440 motorcycle with the conventional inlet over exhaust in-line four cylinder engine. The leaf spring front forks and the plunger type rear suspension are visible in this pictures.

The Indian four cylinder motorcycle perhaps more than any other came to symbolize the Indian name. Certainly as a child I grew up believing that Harley-Davidson motorcycles had V twin engines and that Indian had the straight four. Those were the versions of each that I had encountered. So when Jerry Hatfield, author of “Illustrated Indian Motorcycle Buyer’s Guide” states “The Four is the greatest motorcycle showpiece, the Duesenberg of motorcycling.” that is very much the image of the Indian that I grew up with. 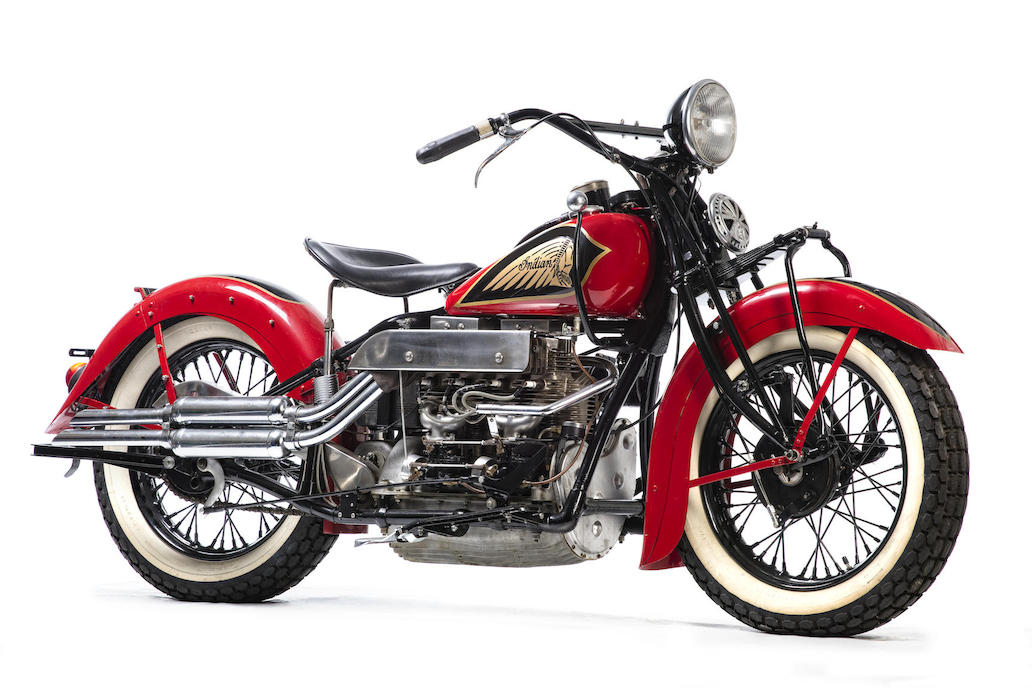 The four cylinder Indian is always an impressive looking machine.

In mid 1935 Indian’s engineers decided that the inlet over exhaust F head design was not as efficient as it could be so they tried reversing the order producing an exhaust over inlet version of the four cylinder engine. This indeed produced more power and was more efficient from an engineering point of view, but the heat from the exhaust was very high and even with a heat shield the exhaust created a significantly uncomfortable situation for the rider. Sales suffered so Indian’s engineers tried to sweeten riders back to the bike with a twin carburettor version for the 1937 model year. The Indian was a very expensive motorcycle back in the thirties and buyers were no more inclined to shell out their hard earned shekels on a twin carburettor motorcycle that fried their inner leg than they were to open their wallets for a single carburettor model that did the same thing. So in 1938 Indian went back to the tried and proven inlet over exhaust version and sales improved. 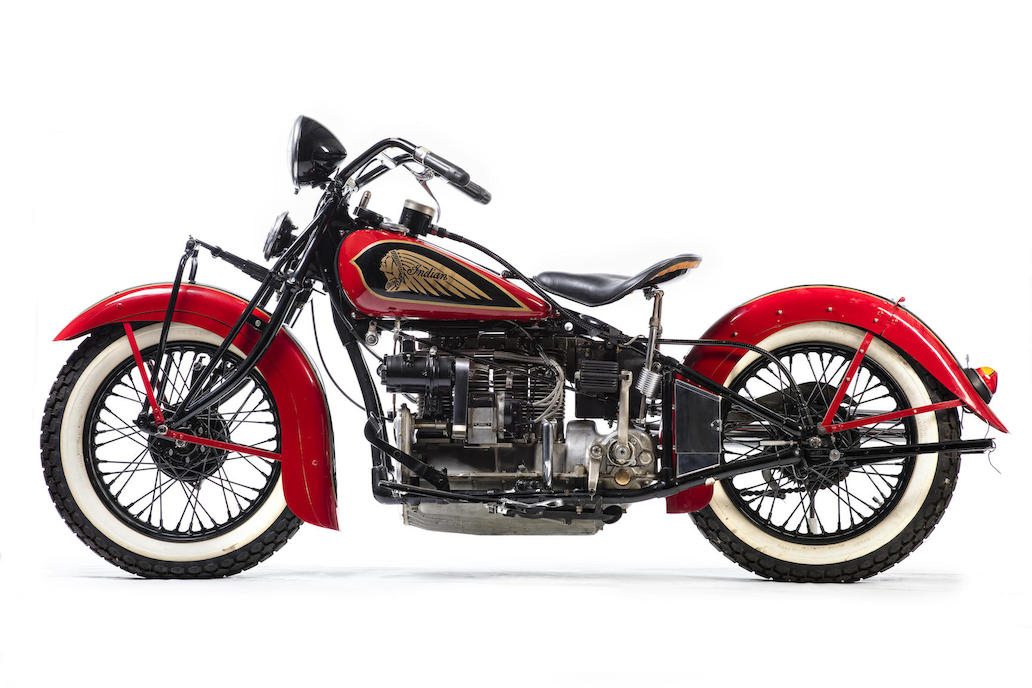 From 1938 onwards to the end of production Indian dropped their exhaust over inlet experimental engine.

The two Indian four cylinder motorcycles in our photographs are representatives of the two styles of Indian engine. The red motorcycle has the “upside down” exhaust over inlet engine whilst the gray bike has the preferred inlet over exhaust engine. 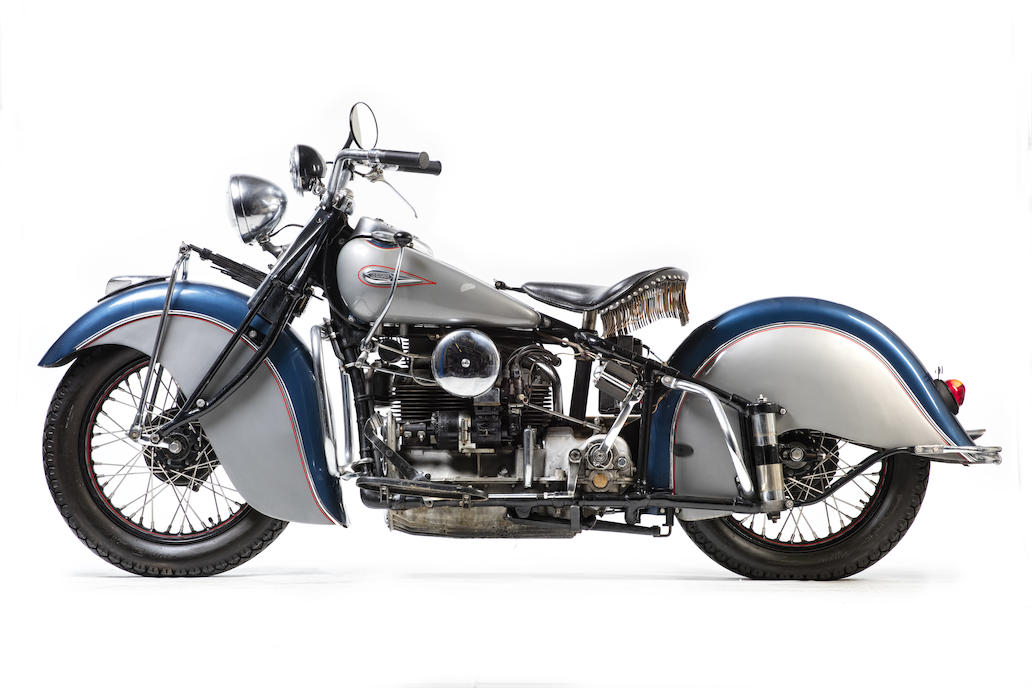 This 1940 example of the Indian four cylinder has the preferred inlet over exhaust engine.

These two motorcycles formed part of the Robert White Collection and that whole collection is to be auctioned by Bonhams on 19th September 2016 at New Bond Street, London, Britain.

You will find the sale page for the gray 1940 Indian 440 four cylinder motorcycle if you click here.

You will find the sale page for the red Indian with the “upside down” exhaust over inlet Indian four cylinder motorcycle if you click here.

The Robert White Collection sale provides an opportunity to acquire examples of the development of the classic Indian four cylinder motorcycles from their origin to their final form.

In this close up we see the “upside down” Indian exhaust over inlet engine. Note the location of the exhaust and inlet manifolds.

In this close up we can see the preferred inlet over exhaust engine style of this 1940 motorcycle.