Growing up in London, England, during the fifties and early sixties; and coming from a family for whom money was stretched pretty tight, my Dad used to find low cost outings to keep my younger brother and I entertained out of the house. One common and easy to accomplish excursion was to go into London and visit one of the main railway stations to watch the trains. A platform ticket cost the princely sum of one penny and so for threepence we could go and gawk at the locomotives and, better still, if asked nicely the driver and fireman would allow my brother and I to climb up into the cab to really experience the fire, the steam, the smell of the oil and coal smoke. Unforgettable, fantastic experiences that are now gone. I wonder how many children in the new, modern and of course “improved” Britain can say they have stood on the footplate of a steam locomotive set to haul the Orient Express from Victoria Station – or the Blue Train – or the Golden Arrow.

So, when it came time for our annual one week holiday to the seaside one of our favorite destinations was Dymchurch. The reason being the Romney, Hythe and Dymchurch Railway. 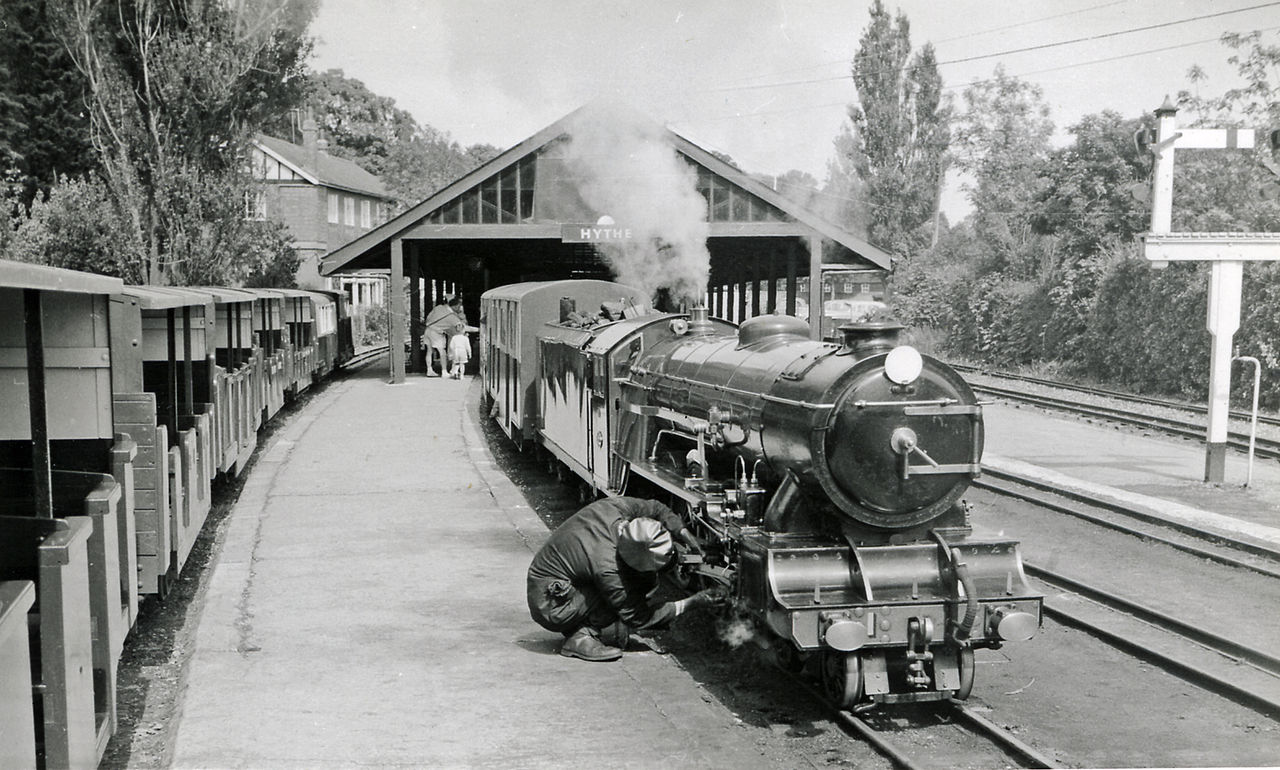 I still love trains and so, when I had the opportunity to go back and visit Britain again after a forty eight year absence I made a point of taking a trip back to Hythe to spend a day just riding the trains and enjoying the sights and smells and the atmosphere filled with happy holidaymakers, and children wide eyed at the trains.

Count_Zborowski in Chitty Bang Bang 1, his 23 liter racing car at Brooklands in the early twenties.

These two men are archetypical of the eccentric British gentlemen who put the “Great” in Great Britain. They are representative of a breed that has sadly all but vanished under the smothering blanket of conformity and political correctness, and consequently, though Britain still keeps calling herself “Great” the rest of the world have long realized that she has actually become more of a  “Not So Great Britain”. Even the Top Gear Guide to Britain describes her as the “fourth best country in the world”. (Perhaps there are also Americans who feel likewise that the United States has tended to become the land of the “no so free”, especially the firearms enthusiasts of the state of California). I think Sir Richard Branson is one of the last of this dying breed of eccentric “out of the box” thinkers and do-ers. May he succeed against the naysayers and cynical armchair “experts” in establishing a space tourism industry.

Count Zborowski and Captain Howey got their visionary eccentric heads together and set about the process of turning their dream into reality.

Hurricane, one of the prettiest locomotives of the RH&DR. (photo courtesy of rhdr.org.uk).

They attempted to purchase the Ravenglass and Eskdale Railway in the Lake District but to no avail. Despite that set back they still set about the building of two fifteen inch gauge locomotives which are still running on the RH&DR today, Green Goddess and Northern Chief. It was during this time that Count Zborowski was killed in a motor racing accident in the Italian Grand Prix at Monza so it was left to Captain Howey to find a new location for the railway and to bring the vision from dream into reality. It was Henry Greenly, who had built the first two locomotives for the railway, who saw the possibility of establishing the line in the Romney Marsh area where it could serve the seaside towns and the summer holiday makers. The railway opened on 16th July 1927 and comprised eight miles from Hythe to New Romney. Later the line was extended to Dungeness making it thirteen and a half miles long.

When World War II came along the RH&DR was requisitioned by the War Department and was used in the preparations for D Day, particularly the laying of PLUTO (Pipe Line Under The Ocean) the fuel pipeline that would supply the invasion force. However the railway was left in a poor state after it was handed back to Captain Howey. It re-opened with the help of Laurel and Hardy in 1947 and was progressively re-built assisted by the increasing boom in summer holidaymakers along the Kentish coast. However, Captain Howey passed away in September 1963 and, just as the Bible tells us that “without a vision the people perish” so with projects like the RH&DR “without a visionary the project will perish”. The visionary who stepped in was Sir William McAlpine and the consortium led by him brought the RH&DR from the brink of perishing into a new future. A future the line now lives in. 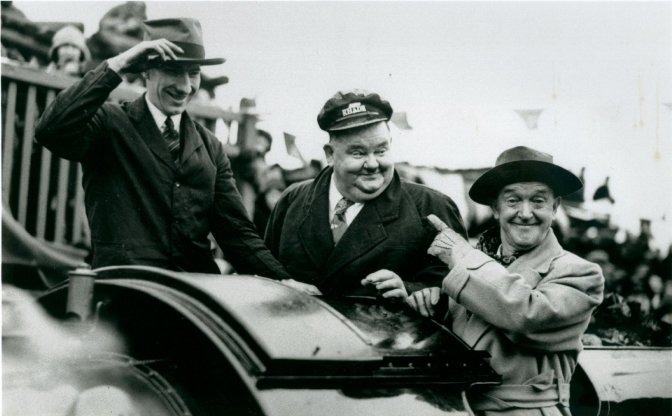 Stan Laurel and Oliver Hardy on the footplate of Doctor Syn at the re-opening of the RH&DR in 1946. (photo courtesy of laurelandhardy.org).

Just like Laurel and Hardy in the picture above I’m sure that many of you, like me, would like to not only ride in the train but to drive the train. You will want to snuggle down into the cockpit (i.e. cab) of one of these amazing machines and learn what all those dials and levers are for on the “dashboard”. If you have “drive a steam locomotive” on your bucket list then I’m pleased to tell you that you can. The RH&DR have a Drive the Train experience. For many this will be reason enough to buy the air ticket and fly over to the UK just for that. 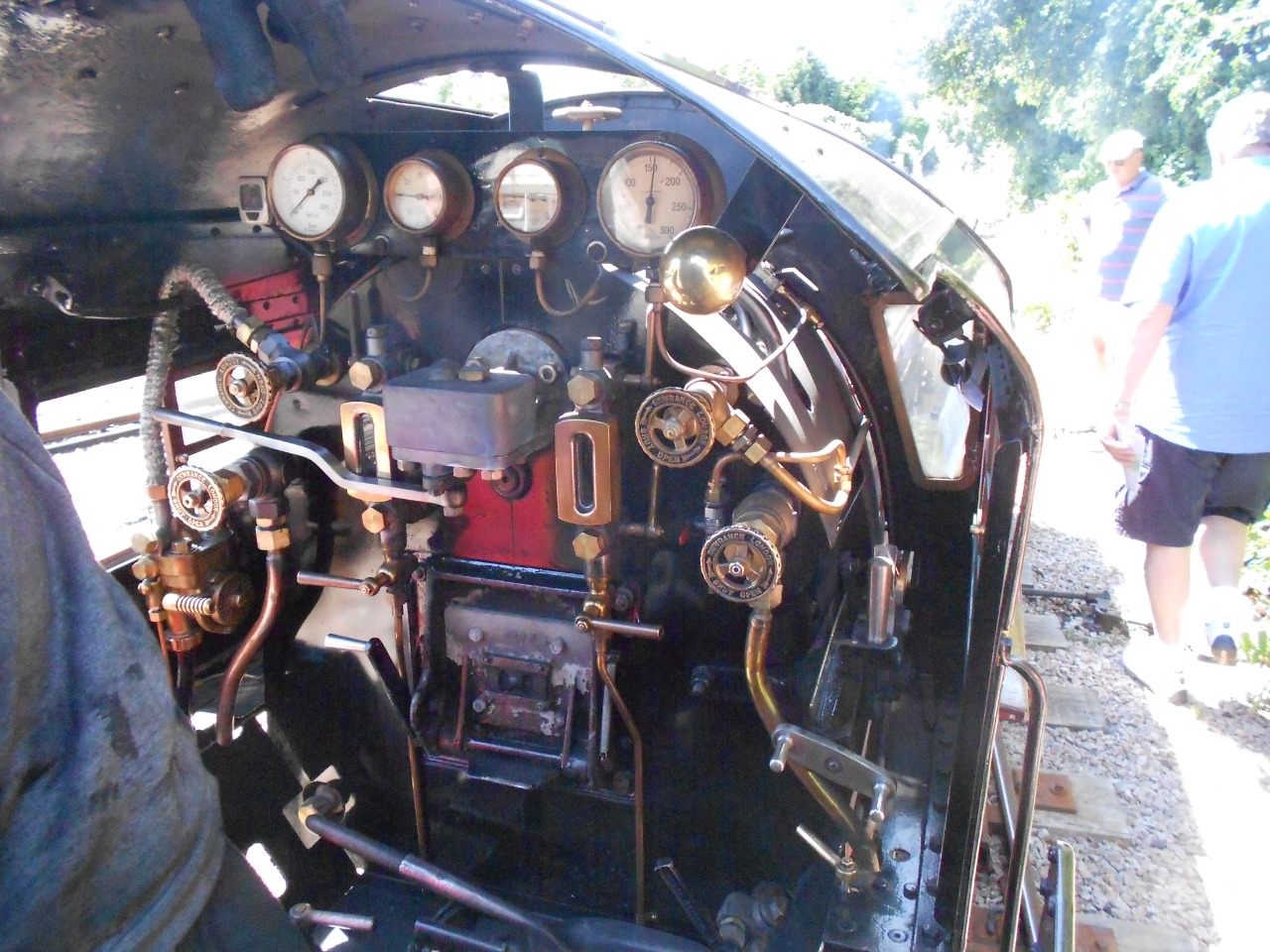 The “dashboard” of “Winston Churchill”. If you do the Drive the Train experience you will learn what all those gauges and controls are for.

The towns serviced by the RH&DR have a charm of their own. They have grown up over the decades to provide seaside holidays with an emphasis on family fun. There is even a fun park at Dymchurch and you can engage in the usual British holiday activities including donkey rides on the beach to go along with the sand castle building. As a child I have many fond memories of the area and for me it was a real “blast from the past” to go back there. Right down to the Fish and Chips lunch washed down with a Shandy at the Dungeness Station. 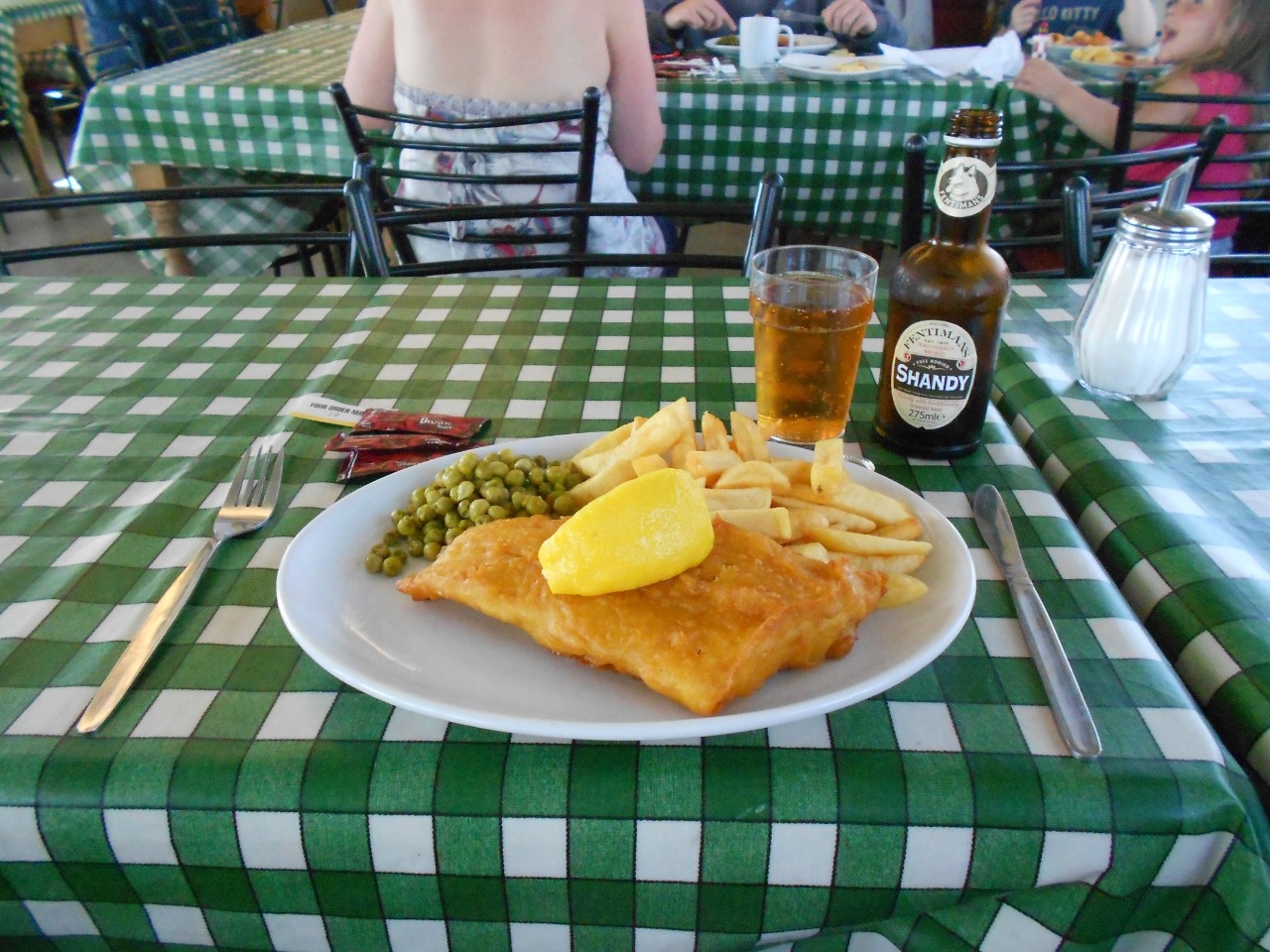 Fish and Chips with a Shandy. You won’t find a more British seaside lunch than this.

If you want to get into local folklore then you’ll likely want to begin with one or both of the movies inspired by Russell Thackary’s novels about Doctor Syn. There was a 1937 movie and a later Disney one “The Scarecrow of Romney Marsh” starring Patrick MacGoohan.

So if you are into Iron and Oil and coal, with the Gunpowder embedded in the tales of Doctor Syn then a visit to the Romney Marshes might just be for you. Horse riding across the Romney Marshes and a gallop along the beaches used to be enormous fun. Those are experiences etched in my childhood memories. Perhaps you’ll acquire some fond memories there also.

Hythe Station. Where your journey into the Romney Marshes begins.