One reviewer of the twin turbocharged Saleen S7 said of its power “too much gas and you’ll smoke the rear tires easily”. If you are looking for a road going GT car that is actually faster than its racing counterpart then the Saleen S7 is for you. Racing cars have to be built according to the restrictions imposed by the race rule book. The road car is not subject to those restrictions. 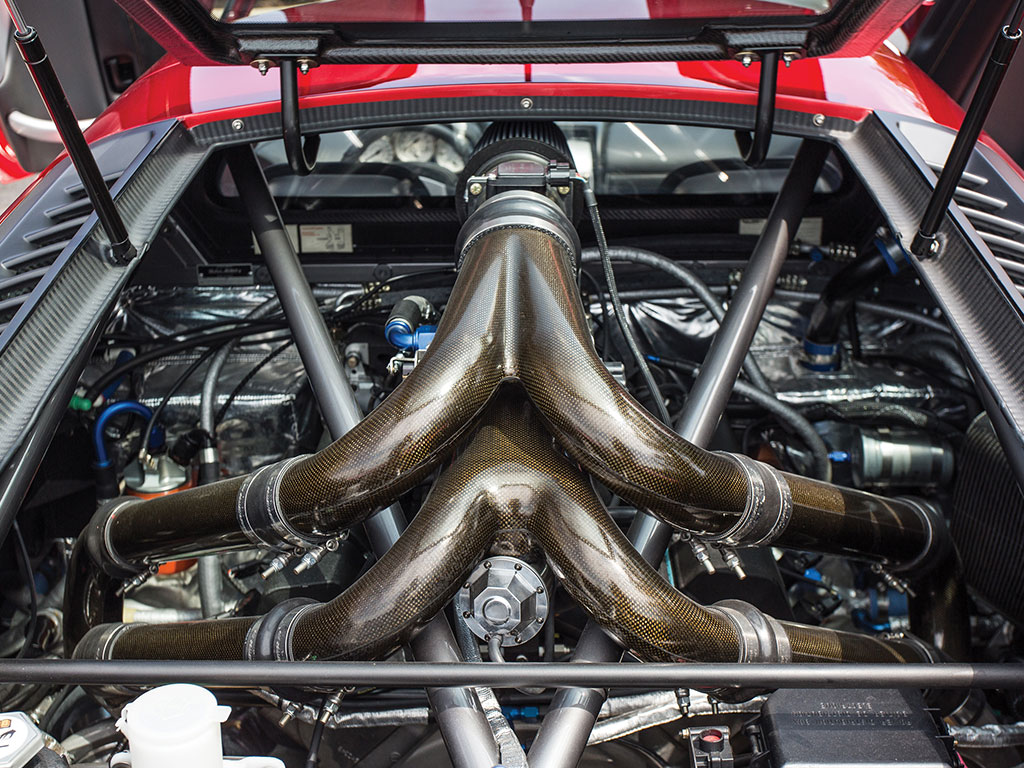 The twin 5.5psi Garrett turbochargers feed directly into the carbon fiber exhaust and catalytic converters – no mufflers are used. The end result is 750bhp and around 86db of engine music.

This is a car that does not have a servo to power assist its ventilated Brembo disc brakes ensuring race car hard feel. The Saleen S7 is a car that is uncompromisingly designed for the driver, to maximize his/her driving experience. Even the driver’s seat is located four inches towards the center of the car both for weight distribution and to ensure the best possible visibility from the driver’s seat. 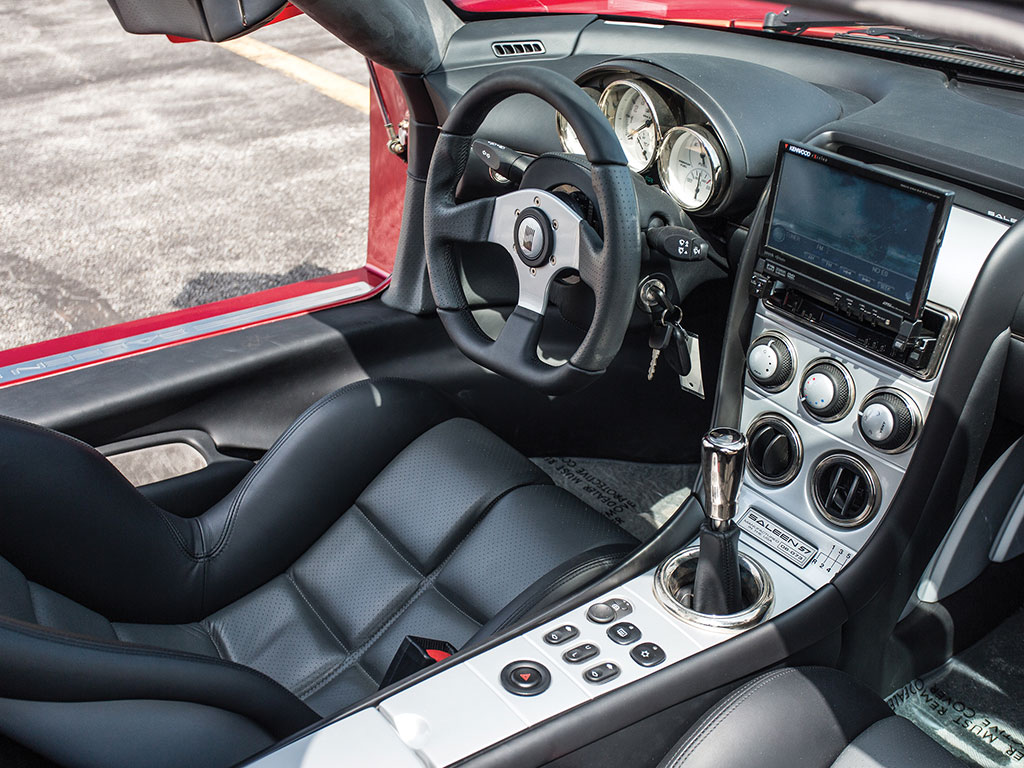 The driver’s seat is located 4″ towards the center of the car for improved visibility and weight distribution.

The driver’s seat is bolted to the chassis as is the norm in racing cars, the driver’s position being adjusted by moving the pedal assembly. Despite this being essentially a race car for driving on the road the interior is a beautiful blending of leather and aluminum. It looks like the top shelf GT car it is. The initial impression of quality in the interior, the carbon fiber exterior and the overall impeccable fit and finish hides even more impressive engineering and attention to detail underneath. The car’s electrical system features teflon coated tinned military grade wiring housed in a high temperature glass mesh wrapped in a woven Kevlar outer skin. Such attention to quality reflects absolute dedication to creating the best performance car possible. 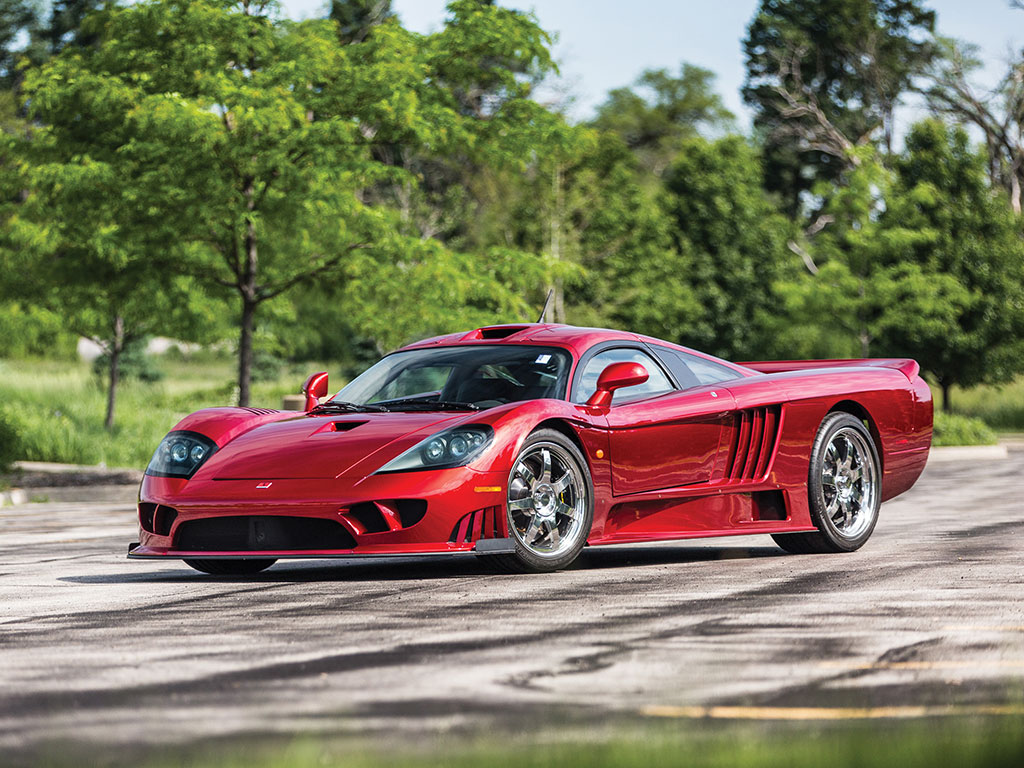 Aesthetics of the Saleen S7 are uncompromisingly functional, aerodynamics first, style second, and it works.

Designed by Ray Mallock Limited in the UK under the direction of American racing driver and custom performance Ford Mustang tuning specialist Steve Saleen and using his concept the Saleen S7 was initially made in the UK before the build work was transferred to the US. The Saleen S7 became the first American mid-engined production super-car. It’s power plant is a Ford 351 Windsor small block with Cleveland style canted valve heads. Original production cars and race cars were conventionally aspirated the road car producing 550bhp @ 6400rpm and this was subsequently updated in 2005 to the twin turbocharged 750bhp S7 of which our 2006 feature car was one of the last produced. The car’s rather generous quantity of brake horsepower and torque being transmitted to the rear tires via a six speed manual gearbox. 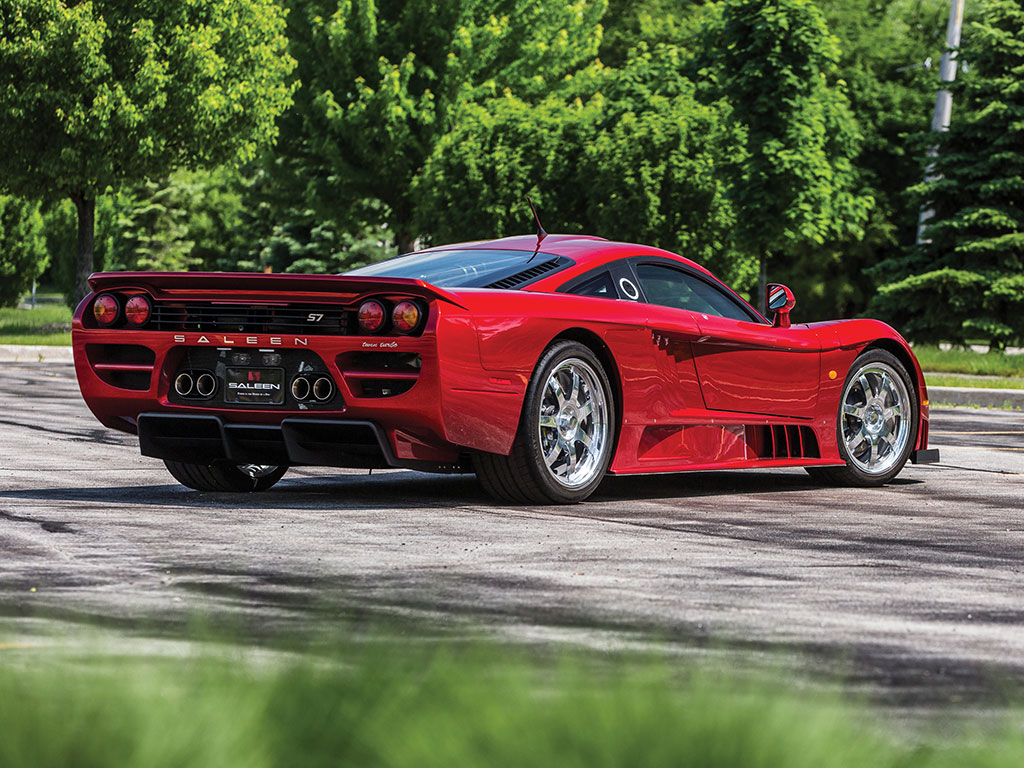 Our feature car was one of the last Saleen S7 produced, being made in 2006.

Structurally the Saleen S7 has a space frame made from 4130 steel as is used in quality bicycle frames and some firearms parts with aluminum honeycomb composite reinforcing panels, the outer skin being carbon fiber. The car’s weight is listed as 2750lb dry. Front and rear suspension are by double wishbones and the whole suspension system is adjustable as one would expect on a competition bred design. 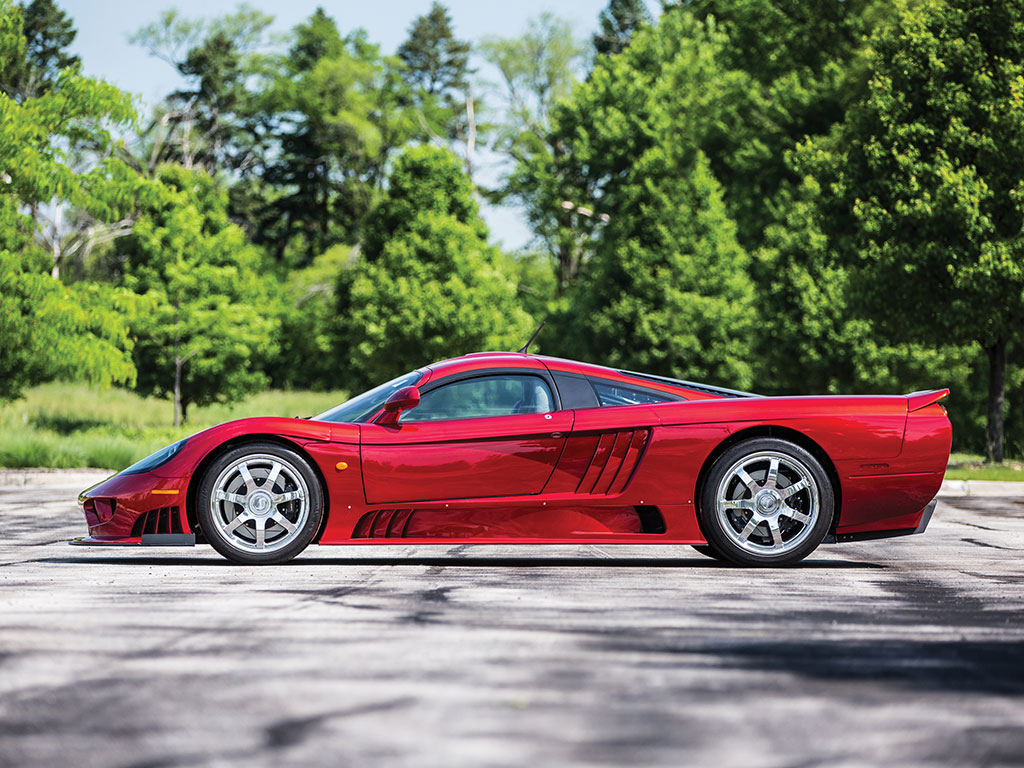 Performance of the S7 is of the sort that requires the driver’s and passenger’s head rests as it is a tad “neck snapping”. 0-60mph is accomplished in around 3.3seconds, gets to 100mph in 7.1 seconds, and does the standing quarter mile in 11.35 seconds by which time it is happily doing 128mph, which is just over half its top speed of  approximately 220mph. The car’s split channel airflow creates down-force to push the car down onto the road as its speed increases and the car is said to be highly stable at speed and delightfully responsive. 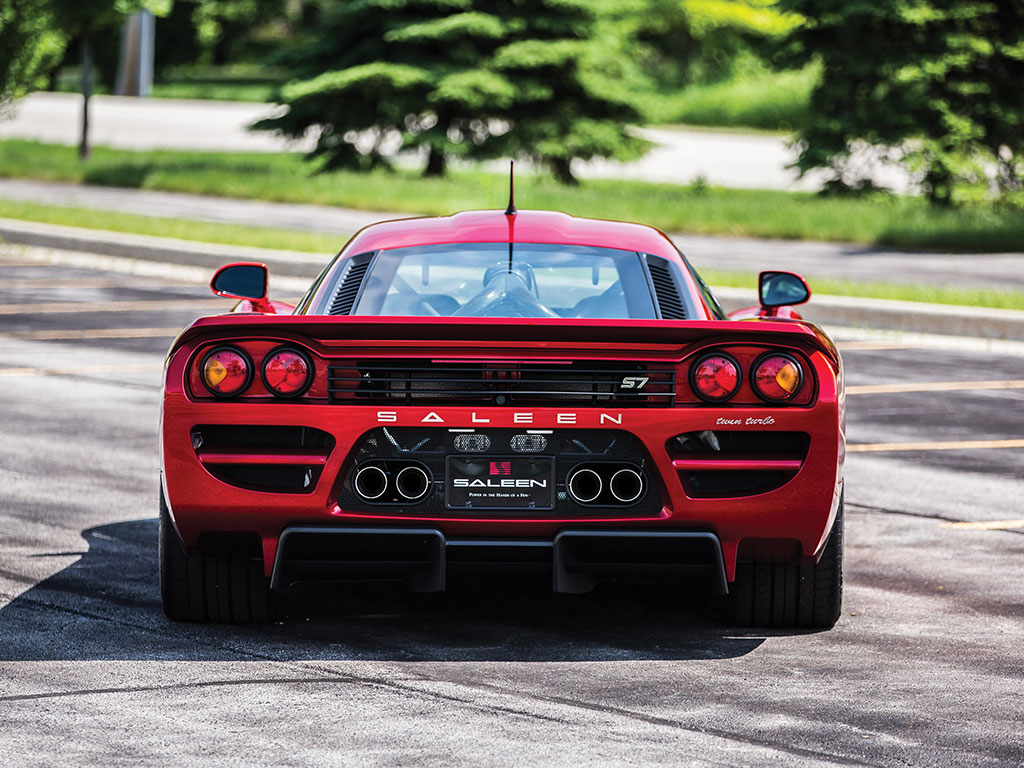 The Saleen S7 looks like a road going race car from every angle.

Our “Lizstick Red” feature Saleen S7 is one of the last of the thirteen that were made in 2006 and is coming up for sale by RM Sotheby’s at their Motor City auction to be held on 30th July 2016.

You will find the RM Sotheby’s sale page for this car if you click here.

The car has only traveled 300 miles and as such is one of the lowest mileage examples in existence. The car has its original fitted luggage set and car cover.

The Saleen S7 in race form has had some competition success including an eleventh place in the 2006 in the Le Mans 24 hours. This road going car is one of very few examples of this first American supercar. It is guaranteed to provide a driving experience that not much of anything else can compete with. For the collector of supercars, for the collector of the best that America has ever created, this is a must have. 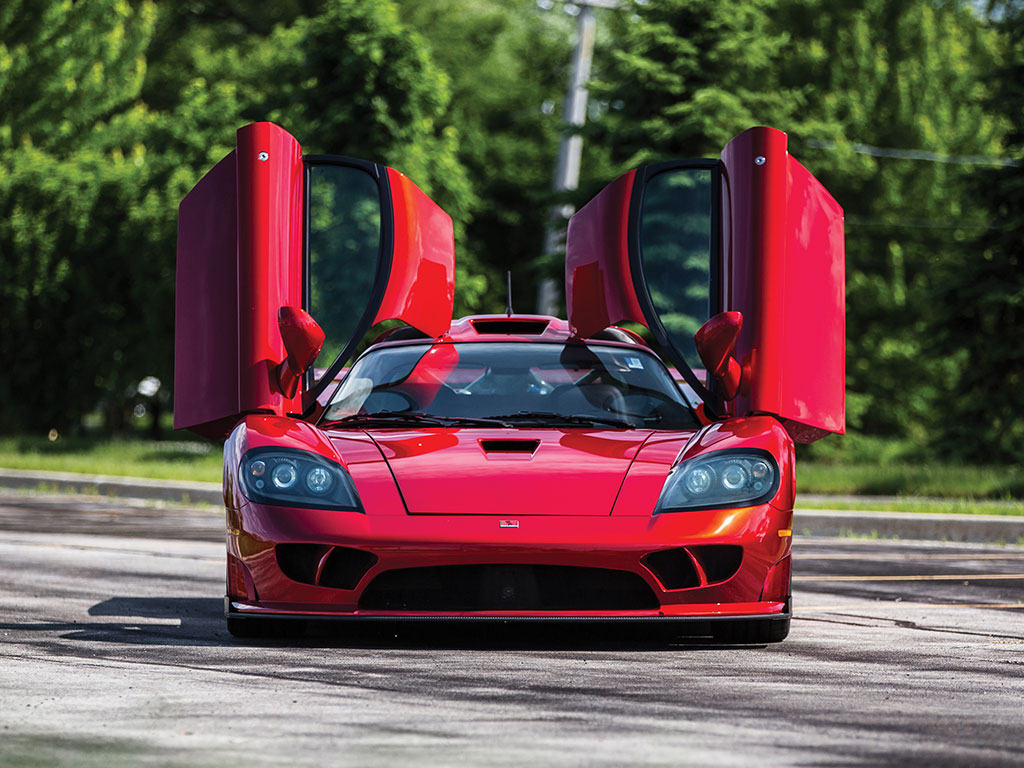