Nowadays we tend to take the over and under shotgun pretty much for granted, but this was not the case back in the early 1900’s when the side by side reigned supreme and British gunmakers had not yet created what they considered a good action design. The first to get a good design created and patented were Boss, at that point of time owned and managed by a gentleman named John Robertson, who worked with his factory manager Bob Henderson to produce an over and under design which combined a secure action, with a quite slim profile.

The problem of creating a good over and under action is not difficult to understand. In a side by side action the hinge and locking lumps all sit underneath the barrels which is fine because the barrels are in the horizontal plane. But an over and under puts the barrels in the vertical plane with the result that attempting to put the locking lumps under the barrels makes for a deep and clumsy action.  The Robertson and Henderson design placed the lumps on the side of the barrels to minimize the action depth.

In the Westley Richards “Ovundo” action the hinge pin is under the barrels, resulting in a deeper action, but the locking lumps are set on the sides of the barrels.

With the appearance of the Boss over and under gun in 1909 pressure was placed on the other British gunmakers to begin offering models of their own. For Westley Richards the pressure increased in 1913 when rival gunmaker Woodward created their own design which was even more streamlined than the Boss. Westley Richards designer Leslie Taylor was already at work and by 1913 had a design that was viable against the Boss and Woodward. In Leslie Taylor’s design the hinge pin was kept in place underneath the barrels, which made for a deeper action than the Woodward, but the locking lumps were placed on either side of the barrels just above the join between them. 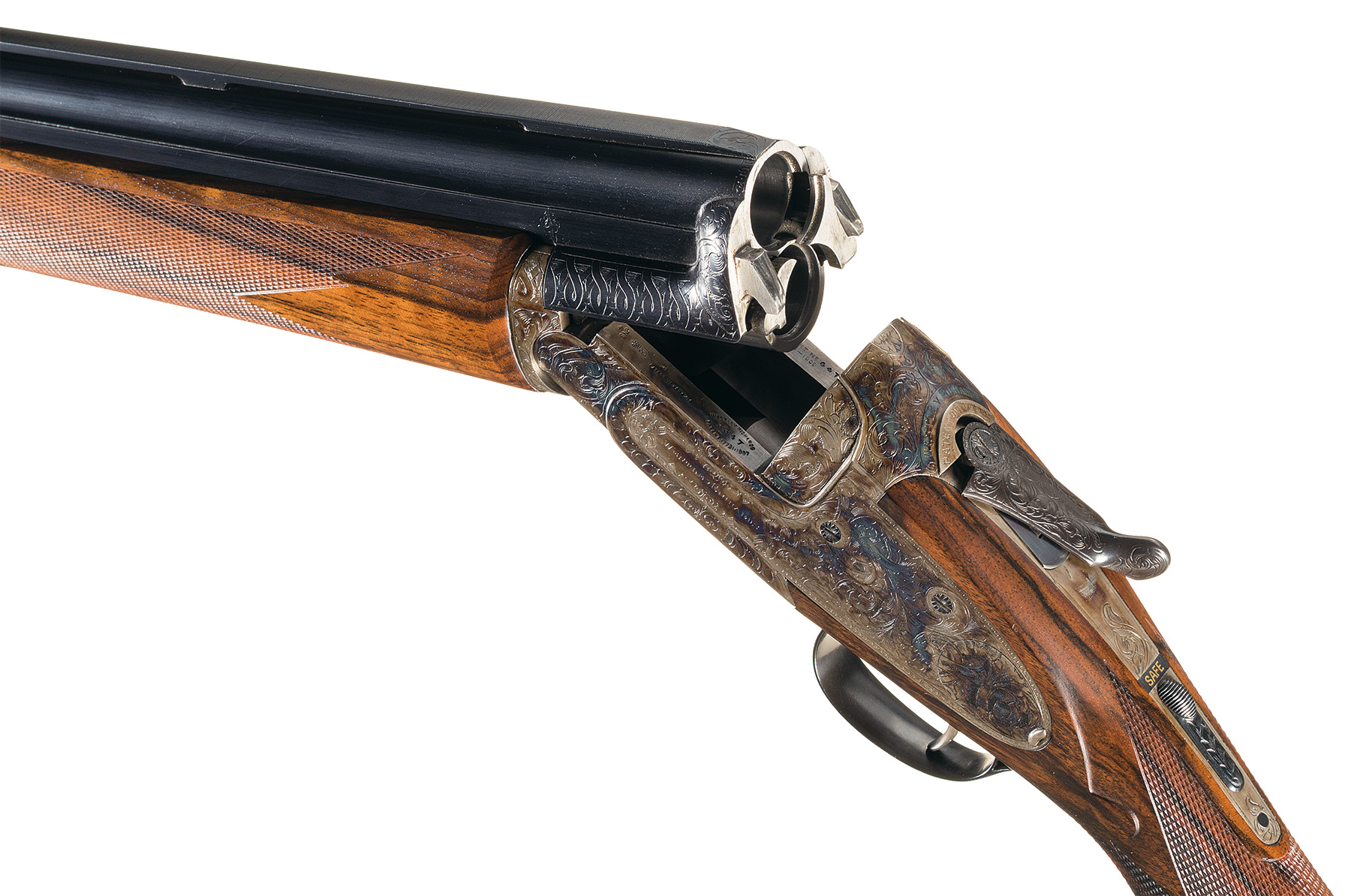 The lumps of the Leslie Taylor designed “Ovundo” can be seen as being shaped like hooks that fit into the action face locking the action closed and also providing a lock against forward pressure on the barrels.

The locking lumps of the Leslie Taylor design were almost hook shaped and they engaged into recesses in the action breech face where they were locked in place from the top, and where they also hooked in so they prevented any forward movement of the barrels under the pressure of firing: it proved to be a very solid system. The resulting “Ovundo” gun was not as lithe as the Westley Richards side by side guns, but it did appeal to customers who liked the “bank vault door” solid feeling of the action and the advantage of the single sighting plane.

The Westley Richards action employed their patented droplock system which is a genuinely effective alternative to the side-lock. In the Westley Richards “Ovundo” the striker mechanisms were made to pivot to solve the problems created by the oblique angle of the firing pins in over and under designs. These guns were normally fitted with the standard Taylor Patent Westley Richards single trigger, although they could be ordered with double triggers for slightly less cost. Some “Ovundo” guns were fitted with a “Dolls Head” top extension, and some not, the gun in our pictures being one that does not. 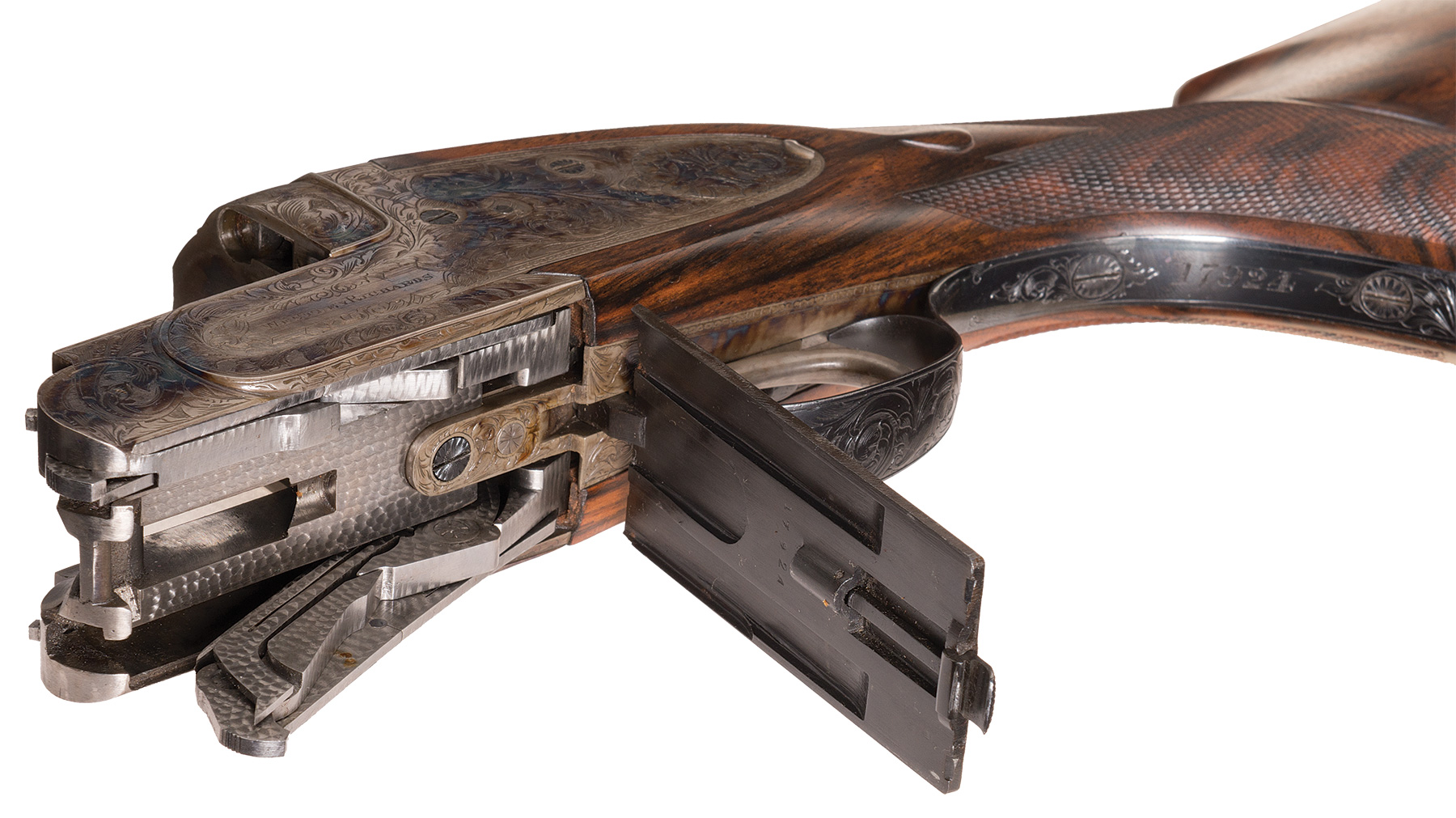 The Westley Richards droplock action features a hinged floorplate which can be opened to allow the locks to be conveniently dropped out for cleaning, or they can be removed to disable the gun in the same way a bolt action rifle can be disabled by removal of the bolt.

There were many variations of the “Ovundo” design which was made both as shotguns, “Explora” bore guns, and as double rifles firing high intensity rifle cartridges. One of the variations was the provision of opening side plates to permit oiling of the trigger mechanism. This was not a feature of all “Ovundo” guns but can be seen in the gun in our pictures.

A common feature of “Ovundo” guns was the opening side plate to permit access to the trigger mechanism for oiling, obviating the need to disassemble the gun.

The Westley Richards “Ovundo” was made from 1913 until 1936 when it was taken out of production. The “Ovundo” has remained out of production since 1936 and Westley Richards have no intention of putting it back into production in its original form. As they have upgraded their workshops and methods to include CNC machining and CAD/CAM the new generation of Westley Richards gunsmiths can be expected to spend the time to perfect a new over and under shotgun design: but at the present the company is being kept very busy making its other guns, which include droplock, fixed lock, and sidelock guns, and double and bolt action rifles.

For those looking for a Westley Richards “Ovundo” gun all hope is not lost however as the gun in our pictures is coming up for sale by Rock Island Auction on April 14th, 2018. This gun is a 12 gauge with  2 ¾ inch chambers. The gun has a 15 inch stock, weighs 7 lbs. 11 oz. and comes with two barrels, the original barrels from 1923 when the gun was first made which are now sleeved  and 26 inches long, and a new set made in 1955 with a length of 32 inches.

You will find the sale page with full technical details of this gun if you click here.

Rock Island Auction describe the condition of this gun as follows: “Professionally restored probably by the factory to near new. Barrel exhibits 98% blue finish with only very minor handling marks and surface scratches. Engraving is crisp, clear and excellent. Restocked to a high standard, the stock with sharp checkering throughout, some very light storage marking with a small patch of bruising to the right side of the forearm within the checkering. The engraving to the sleeved barrels softened. Mechanically excellent. Provenance: Anon. sale, Christie’s, London, 16 October 1974, lot 108 (3800 Gns / $9580). The Christie’s catalogue notes that this gun was built in 1940 with the extra barrels supplied in 1955 and the original barrels being sleeved in circa 1968; Provenance: Robert M. Lee Collection.”

This is a very nice example of the Westley Richards “Ovundo” in 12 gauge with 2 ¾ inch chambers, so it should be not only a wonderful collector’s item, but also an enjoyable historic gun to shoot with. 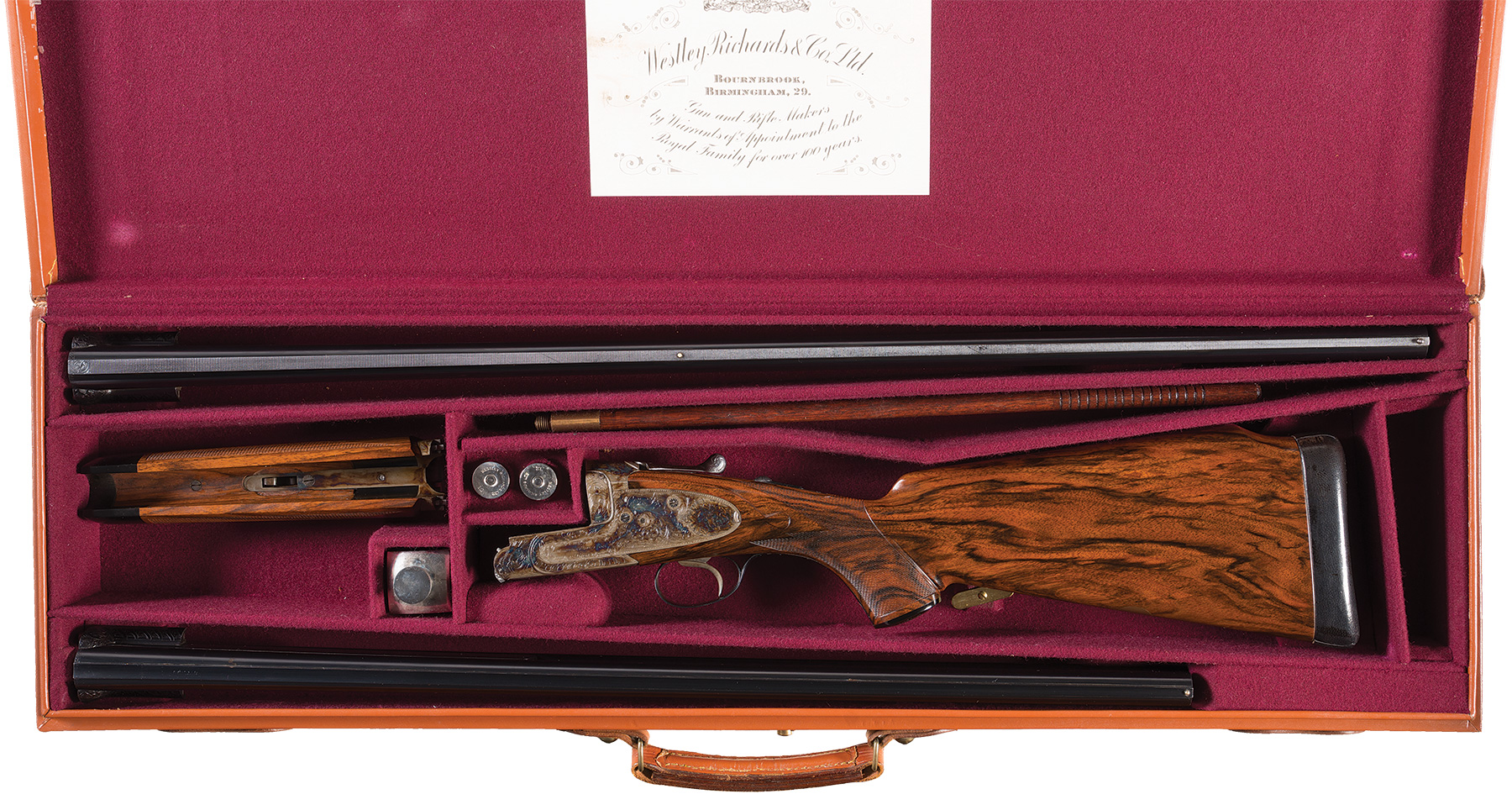