In November of 1937 in a Germany where universal conscription had been introduced two years earlier and the creation of Biker Private Troops had been agreed to the German Oberkommando Heer (OKH) became engaged in discussions with Germany’s two main motorcycle makers, BMW and Zündapp, with a view to creating a purpose built military motorcycle. Prior this military motorcycles had been ordinary civilian models with little or no modification other than painting them with military paint. The German Army was actively preparing to go to war however and the civilian bikes were not the bikes which the Wehrmacht planned to use in their new Blitzkrieg strategy that would require fast troop movements using vehicles and tanks whilst the Luftwaffe engaged in terrifying and destroying their enemy from the air. The Germans had created a new kind of warfare that required vehicles and armor.

With typical German thoroughness and attention to detail the German High Command created a set of specifications to ensure these motorcycles fitted their assigned role perfectly. The specifications given to BMW and  Zündapp were these:-

BMW already had a working prototype of a motorcycle and side-car that would work perfectly which they had built and tested in 1934 in winter conditions. This bike featured a driven side-car wheel with a differential to share the drive between the motorcycle rear wheel and the side-car. BMW found however that the 750cc side-valve engine of their earlier R71 bike would not be suitable for the new military motorcycle so they developed a new horizontally opposed 750cc OHV engine that developed 26hp. Other features from the R71 carried over however including the telescoping front forks and the use of shaft drive.

BMW would have been very well informed as to the conditions in which their military motorcycles were going to need to function. Hitler’s propaganda minister Josef Goebbels’s father in law Guenther Quandt had a major share in BMW, a share that was inherited by Josef and Magda Goebbels’ sole surviving son Harald Quandt in the post war era. So the BMW R75 was built with both the rigors of desert warfare in North Africa in mind but also with the ability to function well in the icy conditions expected in the planned invasion of Russia. It turned out to be such an excellent design that the US government got both Harley-Davidson and Indian to create military motorcycles based on it and the Soviet Red Army quietly acquired five military R75’s via Swedish intermediaries which they copied and created their own Dnepr M-72.

The BMW R75’s gearbox was a four speed with reverse and it also had an “on-road” range and an “off-road” range similar to a Land Rover so these were a bike that could negotiate almost any terrain, travel at walking pace if needs be in company with infantry, travel as fast as the fastest speeds that military convoys were permitted to go at and travel quickly on the Autobahn.

Despite much of the preparatory work for the BMW R75 being already done the motorcycle did not actually go into production until 1941, after the beginning of the Second World War in 1939. Adolf Hitler and his foreign minister Joachim von Ribbentrop had not expected Britain to declare war on Germany in 1939 and when she did it came as a surprise to both of them. When Joachim von Ribbentrop informed Hitler that Britain had declared war Hitler said to him “Now what?” Indeed from that declaration of war on 3rd September 1939 there was an eight month period of inaction called “The Phony War” which was finally broken by the Germans with their opening of their attack on France and her neighbors on 10th May 1940 subsequently leading to Dunkirk and then the Battle of Britain.

The BMW R75 military motorcycle combination in the picture above is coming up for sale by RM Sotheby’s at their Duemila Ruote auction to be held over 25th-27th November 2016 in the city of Milan, Italy.

The BMW R series motorcycles that stemmed from the military R75 have a long history and have developed from a legacy of thoroughness and attention to detail in both their design and actual construction. That they have survived so long and been so widely imitated is a testimony to just how good a motorcycle combination the BMW R75 was. 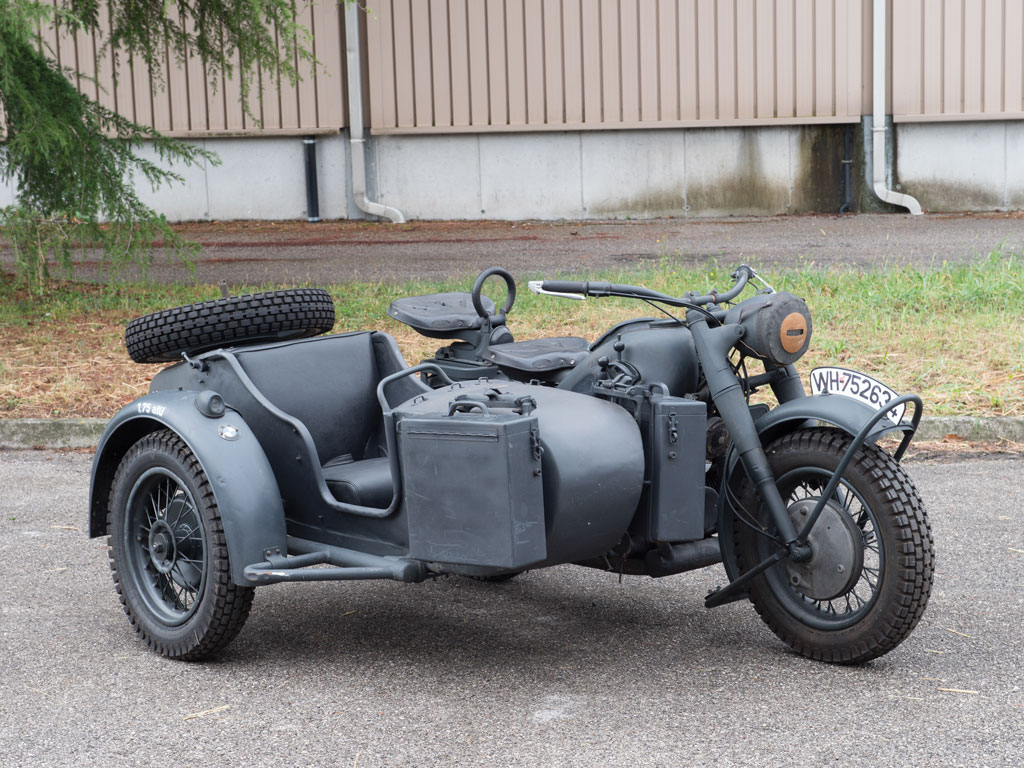 (All pictures courtesy RM Sotheby’s except where otherwise marked).