Bonhams are auctioning a collection of Japanese arms and armor and for those, like me, who are interested in Japan and her history there are a large number of items that would be desirable additions to a collection, or stand alone items that people might just want to own for their own sake.

My  own interest in Japanese arms and armor began in my teens when I joined a martial arts club teaching Japanese Ju-jutsu. Nowadays I train with a Japanese sword club which specializes in the Toyama-ryu military style and which focuses on tameshigiri cutting training in addition to kata, kumitachi and the development of free combat style. This means that I not only own a Japanese sword but actively train and cut with it. Hence I am able to appreciate the technique and art of cutting with the Japanese sword.

People may choose to collect Japanese arms and armor for different reasons. Some collect items as works of art for appreciating and viewing as one would a painting or other antique object. Some may collect for the historical value. Others, like me, are interested in the arts and methodologies surrounding the use of these art objects. Martial arts are referred to as arts for a reason. The performance of kata or kumitachi for example is much like dance drama and should be appreciated as such.

The main Bonhams page for the Japanese Arts and Armor auction can be found here. There are many items on offer, far more than I can individually feature so I’ll pick on a small number that may be of particular interest. Let’s start with the guns.

Up until Commodore Perry forced Japan to open up her ports to trade in 1854 Japan had been a closed country for about two hundred years, and a totalitarian state in some ways quite like North Korea is today except if a foreign ship is wrecked on the North Korean coast nowadays the government does not automatically put all the shipwrecked sailors to death. In Japan during her two hundred years as a closed society sailors shipwrecked on the coast of Japan were put to death. She had been locked in the early 17th century both technologically, culturally, and politically in something like a Brigadoon time bubble. This is one of the key reasons that the Japanese sword reached it’s status as the most developed work of sword art of any nation in the world. Other nations had moved on in military technology and the sword became progressively more and more obsolescent. It is also the reason that the technology of the matchlock musket and the techniques and arts surrounding it were preserved in Japan.

I had a chance to see this in action in 2009 when I was competing in the annual Toyama-ryu Tai Kai (i.e. championships) in Machida City, on the outskirts of Tokyo. A demonstration was presented by Shimazu Kenzi and a team of Japanese traditional matchlock enthusiasts. This was done in the normal Japanese style by demonstration of kata for the matchlock. Up until then I had no idea that there were kata for the matchlock nor did I understand that the Japanese had developed paper cartridges in shoulder carried bags for faster loading of their matchlocks. It was a revealing and fascinating demonstration that painted a picture of battlefield deployment rather better than an Akira Kurosawa movie. I have great respect for Akira Kurosawa and his films but I also note that he never really gets the firearms right; and to be fair, having watched the techniques of managing a matchlock I can well understand that to train a few thousand extras to do that realistically on a movie set would be a long and expensive proposition. 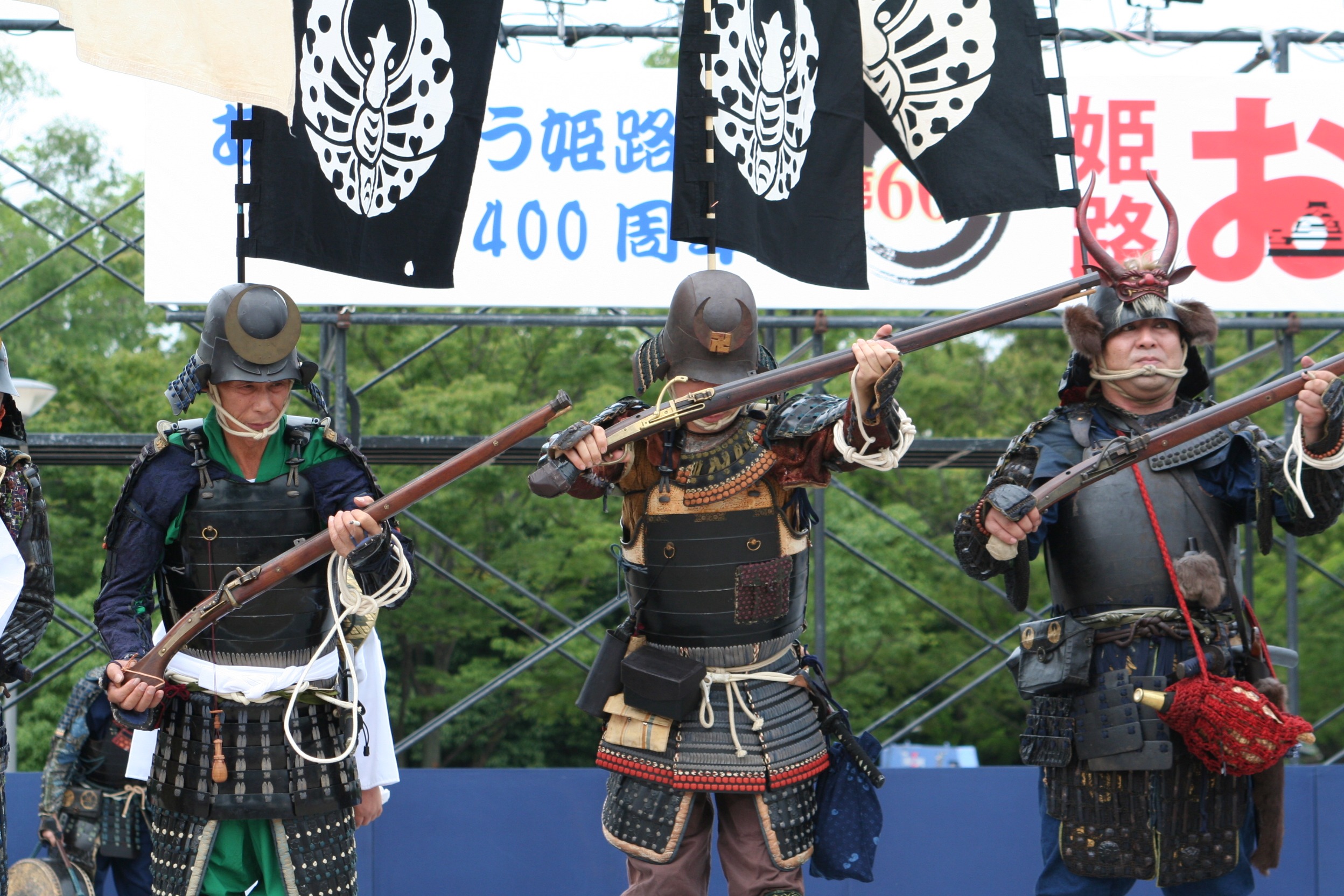 2009 demonstration of methods of the matchlock musket. Note the belt bags for carrying paper cartridges.

Bonhams have two Japanese matchlocks for auction. The first is by Bizen Sukeyuki of the Edo period of the early 19th century. The musket is approximately 17mm or .67 caliber and decorated with the Tokugawa family crest.

Amongst the other items listed in this Bonhams auction is a sword tsuba (hand guard) with a difference. We are not used to seeing sword tsuba with a Christian crucifix in the decoration and in most school history books and indeed in most martial arts clubs there will be no mention of Christian samurai. Were there any? Yes, according to history there were tens of thousands of them. 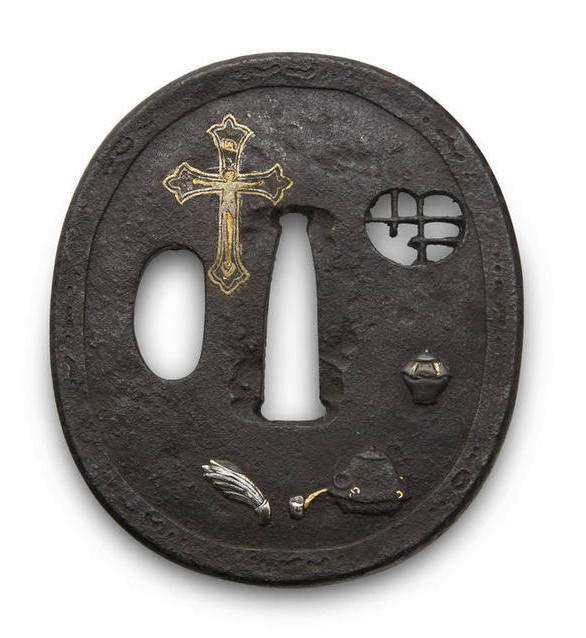 What happened to the Christian daimyo and samurai in Japan? The short answer is they were on the losing side at the Battle of Sekigahara. Once the Tokugawa shogunate was established after Ieyesu Tokugawa won the battle of Sekigahara he, his son Hidetada, and his grandson Iemitsu set about the process of eliminating all the Christians in Japan with typical Japanese thoroughness. All were forced to renounce their faith or die at the hands of the Tokugawa enforcers. Some were able to leave Japan, such as Takayama Ukon. Perhaps the final stand of Christians in Japan was at the Shimabara rebellion between 1637 and 1638, in which all were killed. The only person in Japan who was allowed to keep his Christian faith was William Adams, an Englishman who had become a personal friend of Ieyesu Tokugawa and about whom James Clavell’s novel “Shogun” is based. The novel “Silence” by Shusaku Endo attempts to portray something of the feel of this period, and I believe Martin Scorsese is in the process of planning a movie based on Shusaku Endo’s novel. Thus this little tsuba brings up a lot of history, and that is what antiques should do. I would love to know the story of the original owner. Then again, it is likely to be a story with a tragic ending.

The last item I’ll feature from amongst this amazing auction from Bonhams is a smoking kit. This kit is based on a spearpoint or “yari” mounted in bamboo mounts with deer antler ends complete with a tobacco pouch. 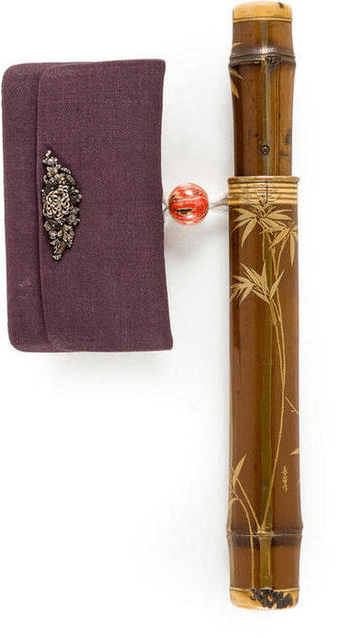 Japanese smoking kit based on a yari (spearpoint) blade. Quite useful if someone is too persistent in trying to get you to give them a smoke.

The “yari” (spear point) blade of the smoking kit. It was common for spear points to be used for self defensive daggers.

If you are interested in Japanese antiques then this Bonhams auction is worth a look. There are suits of armor, lots of sword blades of varying antiquity and price, and even an antique archery kit.

Every antique tells a story of people and places. Sometimes we can find out the details, and others we can only look at the place and time in the history books to catch a glimpse of what the former owner lived through. As for me, I haven’t had a chance to try out a Japanese matchlock yet nor learn any of the matchlock kata. But I have met the people and quietly added that to my bucket list.

(Feature image was taken by the author at the Toyama-ryu Tai Kai in 2009. The person is a member of Shimazu Kenzi’s team. Both the matchlock musket and the katana are approximately four hundred years old.)