A Car For a Maharaja and the Sport of Shikar

For Indian Maharajas the sport of “Shikar” (tiger hunting) was often popular, in part because of the challenge of risking one’s life in the face of one of the world’s most cunning and dangerous foes, and in part because for a ruler to face what were often man-eating tigers and kill them was looked upon with great gratitude by the villagers whose families and friends were in danger of becoming one of the tiger’s victims.

If you’ve ever needed to walk a path alone in a place where potentially dangerous animals might be encountered you will tend to appreciate this with vividness, especially if you were not armed at the time. 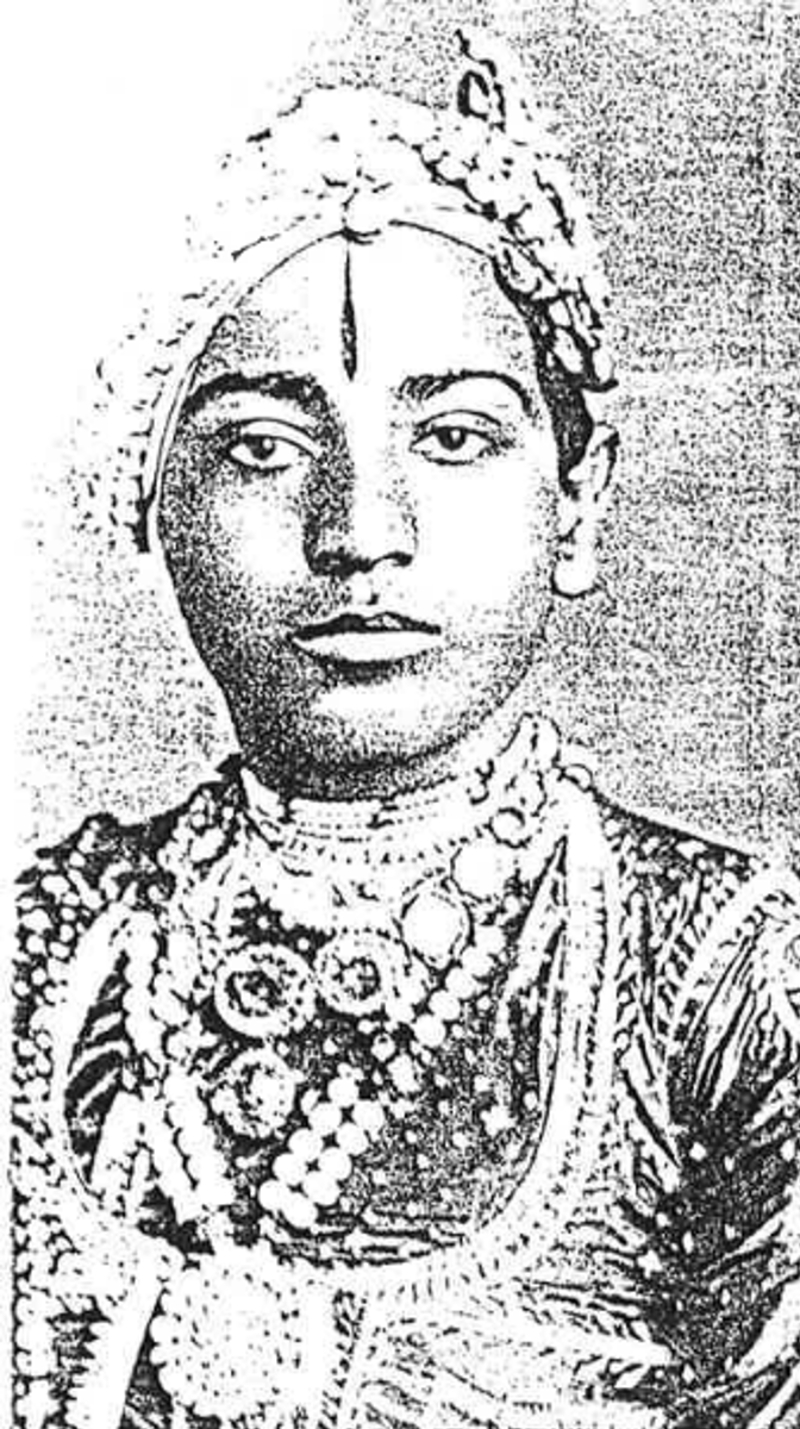 Maharaja Gulab Singh of the Indian State of Rewa. His full title was Major-General His Highness Samrajya Maharajadhiraja Bandresh Shri Maharaja Sir Gulab Singh Ju Deo Bahadur of Rewa, and he lived from 1903-1946.

The Maharaja of the Indian State of Rewa was a man who was raised in a family in which the sport of Shikar was very much esteemed and so he took it up earning himself the appreciation of the village people of the State of Rewa, and also earning himself a reputation as a courageous man who appreciated fine rifles in large calibres. He became particularly well known for his penchant for four bore rifles: he also became known for his taste for expensive automobiles of exquisite quality and flawless engineering.

The Maharaja of Rewa had his own tried and true method for hunting tigers and there were a few essential items required for one of the Maharaja’s tiger hunts.

The first piece of tiger hunting equipment is, of course, a suitable rifle or gun: the difference between them being that a rifle is fitted with a rifled barrel or two while the gun is typically smooth bore perhaps with Holland & Holland “Paradox”, Westley Richards “Explora” or “Lancaster oval bore” rifling.

Close encounters of the tiger kind are rather dangerous to one’s health and normally occur in thick jungle, so the sensible choice of gun or rifle is one that has both the bullet weight and diameter that when shot the tiger will immediately think “I’ll just lie down and die now and save everyone a lot of trouble”. 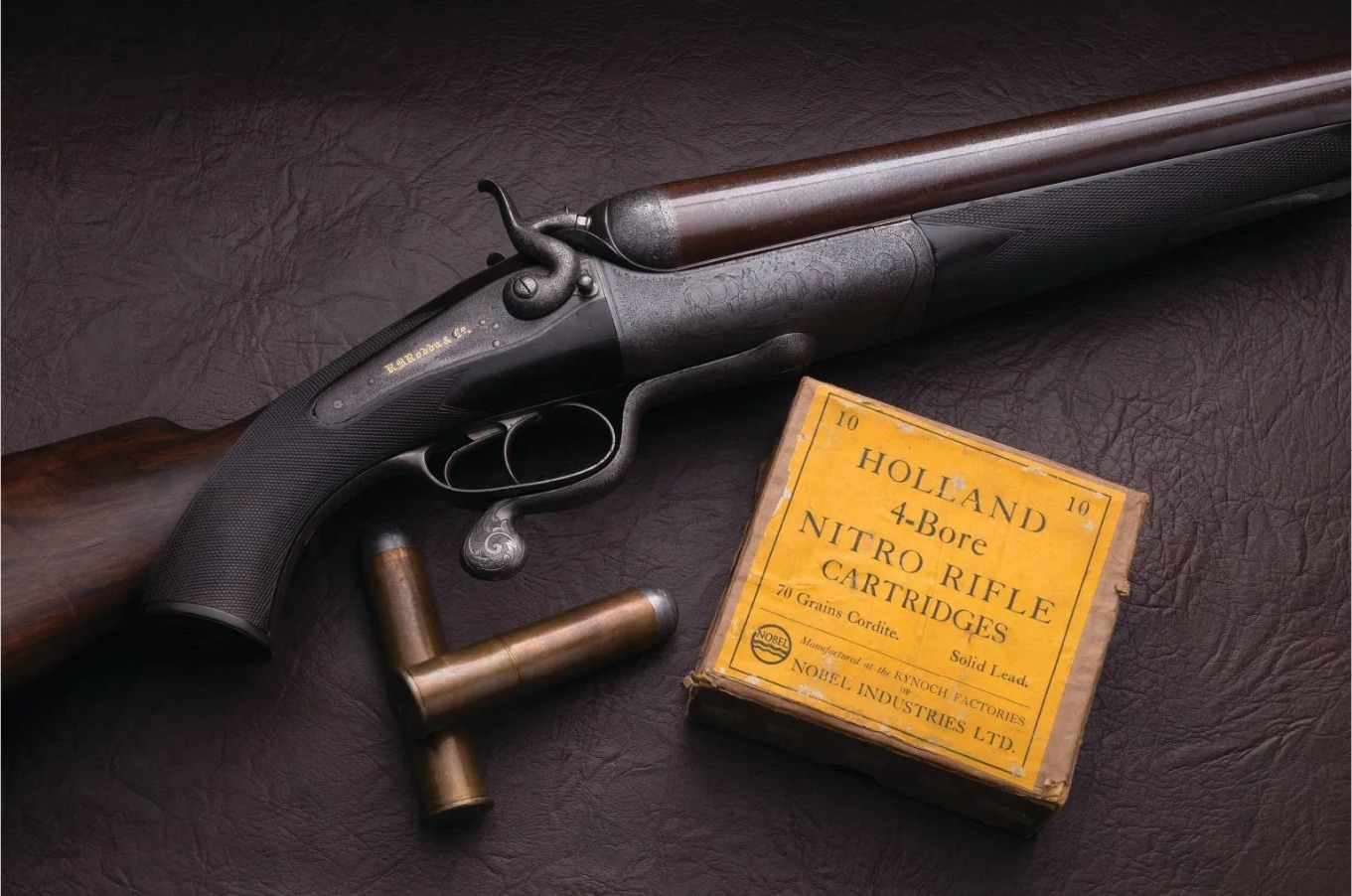 For this reason Indian princes tended to purchase heavy calibre guns that would provide the sort of life insurance desired. One that could fire a bullet so heavy that it would plough through the jungle and through the tiger with unstoppable force. To this end rifles such as the 600 Nitro Express were used, typically loaded with soft point bullets which would expand rapidly as they passed through the tiger. 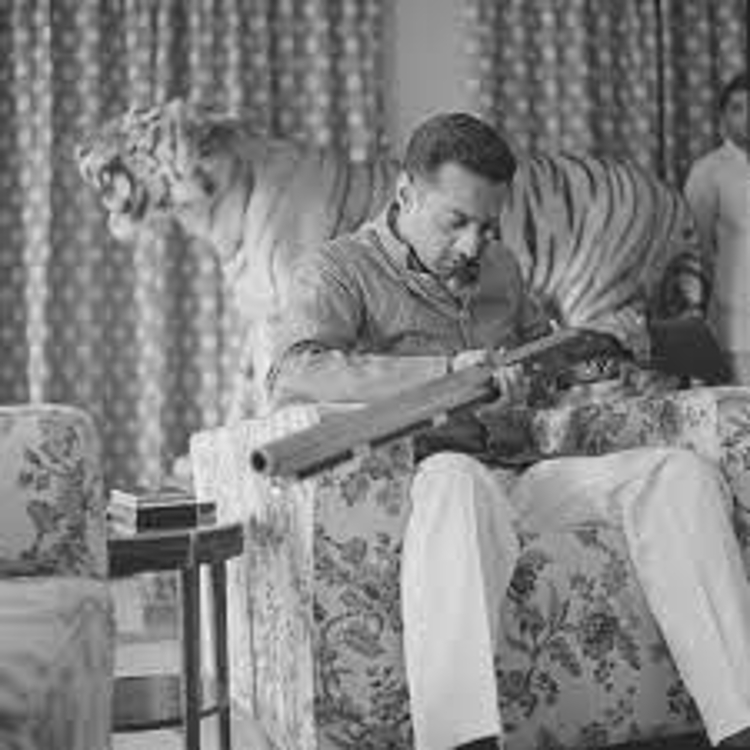 Member of the Rewa royal family examining what appears to be a single shot four bore gun.

The heavy calibre rifle being an obvious item needed for tiger hunting let us now turn our attention to the trained monkey on a long string, the interesting book, and the nice comfy chair.

The Maharaja of Rewa’s preferred method of tiger hunting was to organize a large company of beaters to drive any tiger in their path towards the waiting Maharaja. The Maharaja would first send his trained monkey up a suitable tree: if the monkey became aware of an approaching tiger it would make a cough noise of alarm – thus alerting the Maharaja that the game was afoot!

The Maharaja would then ensconce himself in his nice comfy chair and begin reading his interesting book while he waited for his monkey to cough and alert him of the tiger’s approach.

The “Star of India”

In order to get to the Maharaja’s chosen hunting spot a reliable and luxurious automobile was required and Maharaja Gulab Singh of Rewa was a car aficionado of immaculate taste. He owned not only a number of Rolls-Royces, and Hispano-Suiza cars: but perhaps his most delighted in were his Daimlers. Daimler were at that time the preferred automobile of the British Royal Family and so it was natural for the Maharaja to want to own such “Royal” cars for himself. 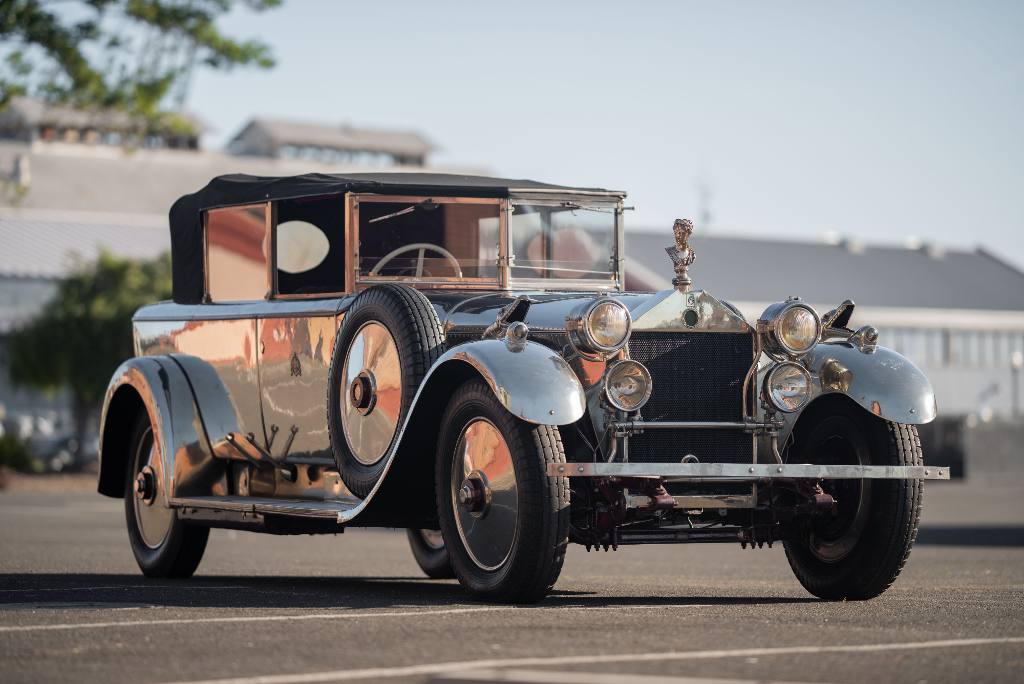 The custom German Silver coachwork makes this car stand out as the “Star of India” – a maharaja’s car.

The Maharaja purchased a Daimler 45 hp rolling chassis in 1926 for the then princely sum of £1,400 and had it taken to custom coach-builders Barker & Company of London for the creation of its bespoke bodywork. This bodywork was to be of German Silver over a wooden frame. German Silver is not actually silver but an alloy made of nickel, copper and zinc. This produced a durable corrosion resistant body which did not require paint and was readily able to be cleaned and polished to make it dazzling to look at, hence it acquired the name “Star of India”. 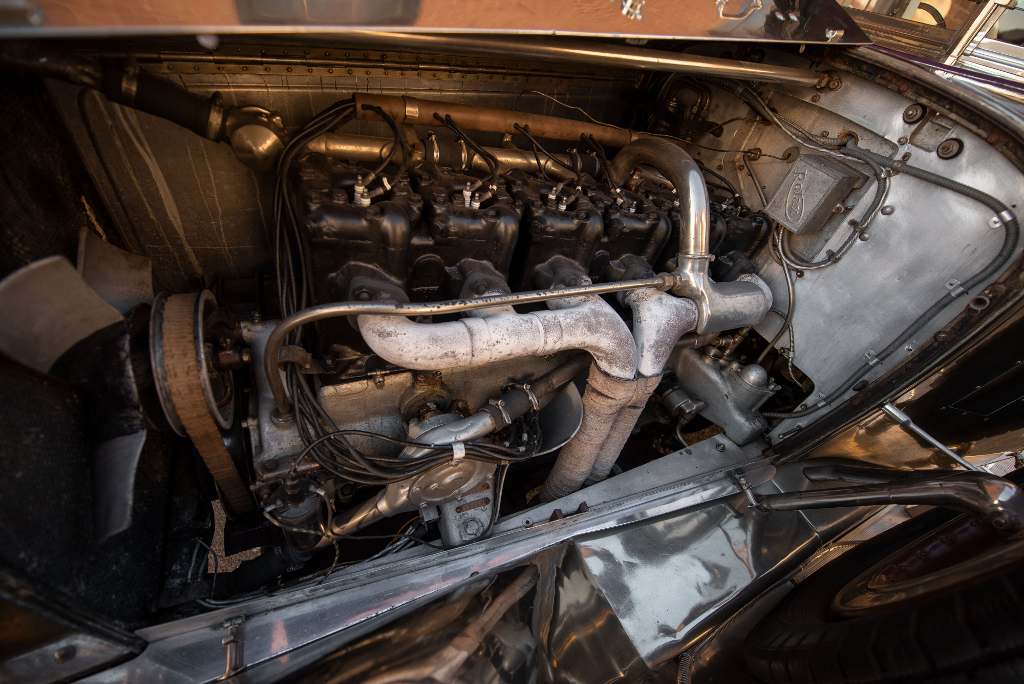 The sleeve valve 7,413cc engine was fitted with twin spark plugs to assist with engine ignition reliability. It is not good to have an engine’s ignition system fail if you need to make a quick getaway from a grumpy tiger.

The “Star of India” was powered by a 7,413 cc six-cylinder sleeve valve engine and drove the rear wheels via a cone clutch, four speed manual gearbox and worm type final drive. The sleeve valve system was originally created by an American engineer named Charles Yale Knight and was notably used by both Daimler and French automobile maker Avions Voisin.

Sleeve valve engines are famous for their silence of operation, thus a sleeve valve powered car would be a preferred choice for silently cruising along jungle tracks to find a perfect spot for setting up the comfy chair in anticipation of the arrival of a tiger. 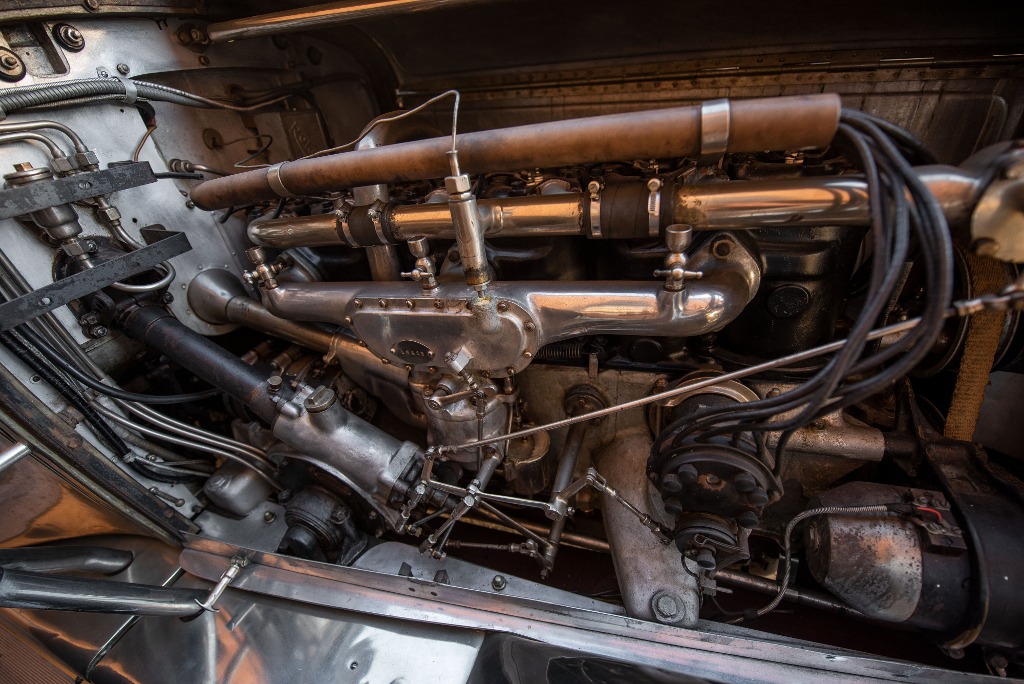 The engine compartment of the “Star of India” is a beautiful display of copper and steel.

The style of bodywork the Maharaja chose was that of a “salon cabriolet” which provided an open car when the weather permitted or when the car was being used as a hunting car, and a soft top with side windows for times when protection from the rain was needed or when privacy was desired.

To provide privacy the car was fitted with double sets of side windows, one set of plain glass and the other of darkly smoked Triplex “purdah” glass. 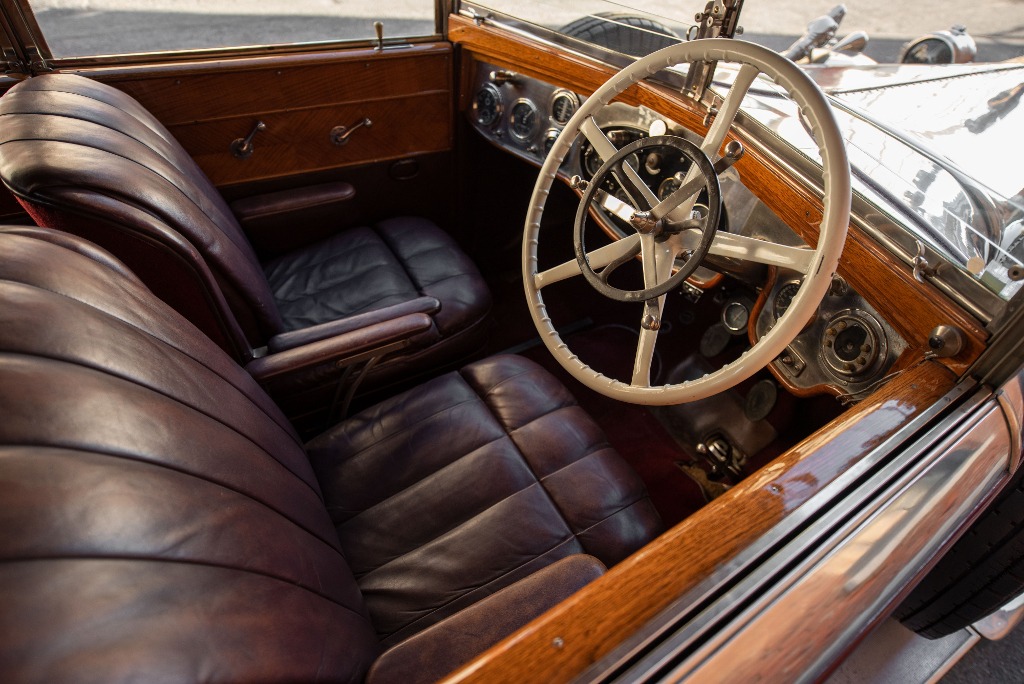 The car is fitted with double side windows can be seen in this photograph. If you look at the left side door you will see the double window cranks, one for the clear glass window, and the other for the dark smoked “purdah” glass window.

One of the purposes for the double side glass was to provide privacy for the Maharaja’s two wives when they were traveling in the car. 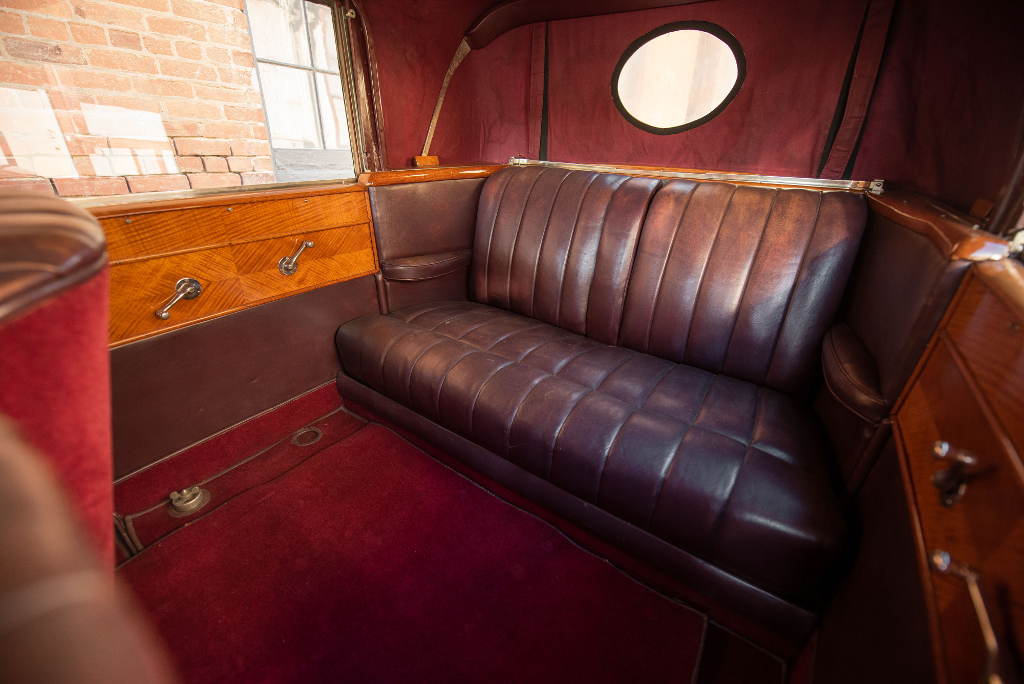 The spacious rear passenger compartment of the Star of India 45hp Daimler. Note the twin window winder cranks, one for the clear glass and the other for the darkly smoked glass.

The dashboard fitted to the Star of India was one to satisfy the Maharaja’s understanding of engineering, he genuinely wanted a range of instruments to keep him informed of the state of the engine. So there were a speedometer and a tachometer along with water and oil temperature gauges. As befits a vehicle that will be used in natural environments there was also a gradient meter to measure the car’s angle and an air temperature gauge to monitor the temperature of the outside air. 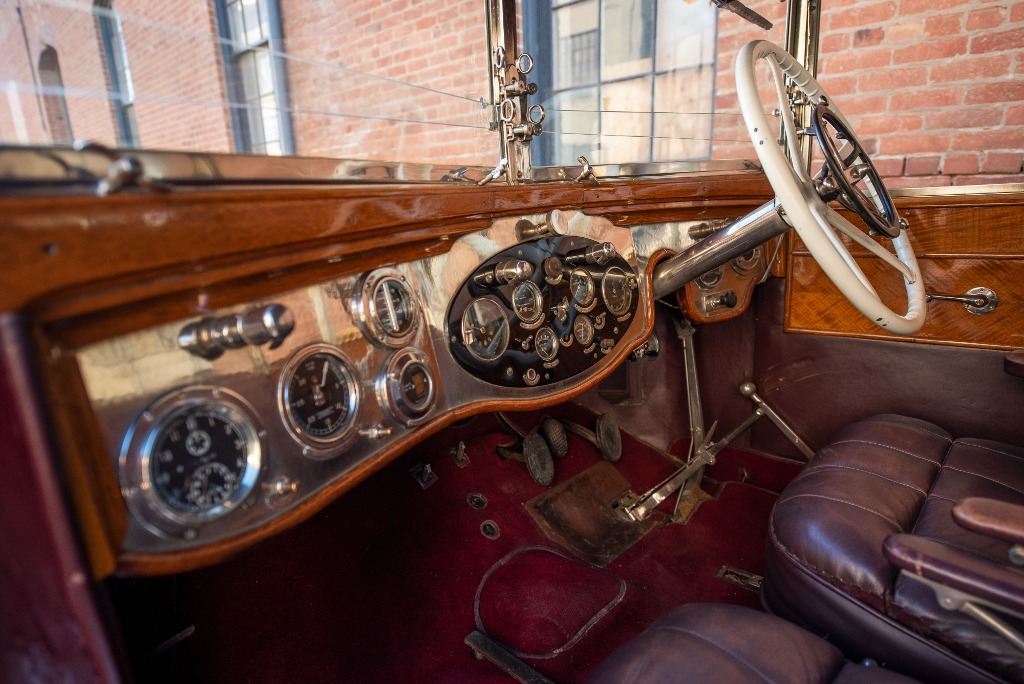 Truly an engineer’s dashboard. Tastefully set in polished wood the instrumentation can only be described as comprehensive. Note that the pedals are arranged in the old style “CAB” layout. i.e. from left to right Clutch, Accelerator, Brake.

The external equipment of the Star of India featured a pair of headlights and a pair of auxiliary driving lights by British maker Lucas (often referred to by the nickname “Prince of Darkness”, and a pair of “boa constrictor” horns to warn locals and wildlife of the Maharaja’s approach. 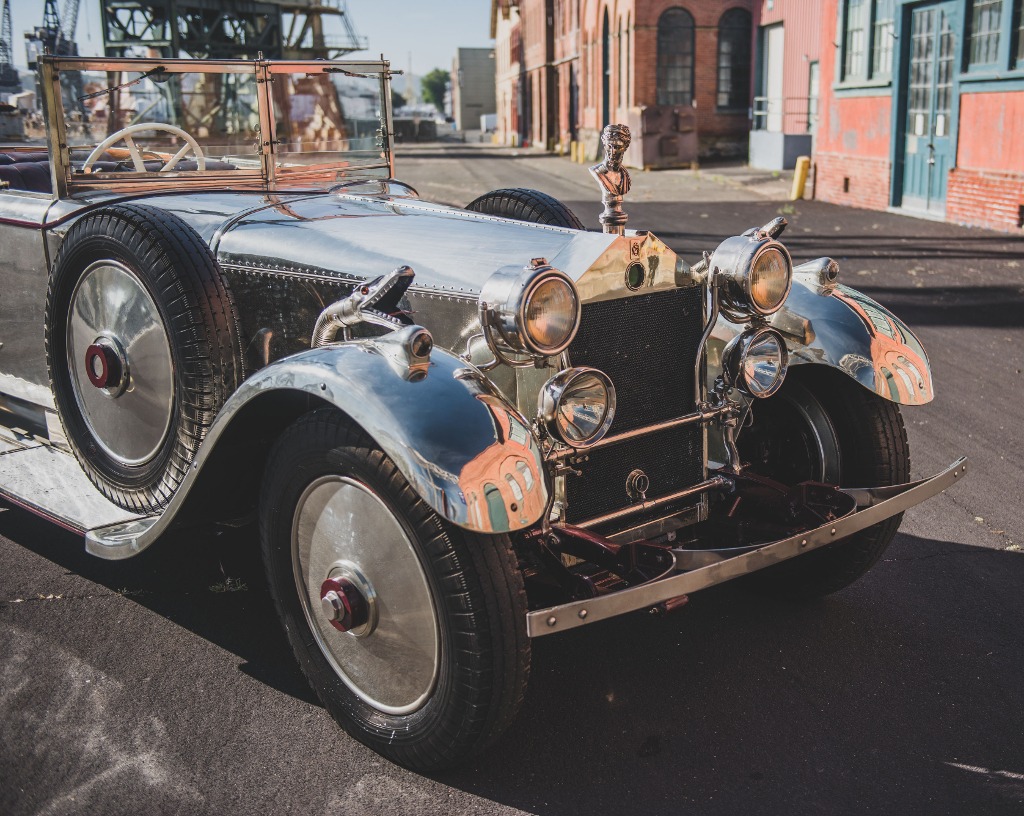 The front mounted equipment of the Star of India features a pair of Lucas headlights and a pair of driving lights. In addition to this are a pair of “Boa Constrictor” horns.

At the rear of the car were a pair of Toby tail-lamps which look like miniature old style diver’s helmets. 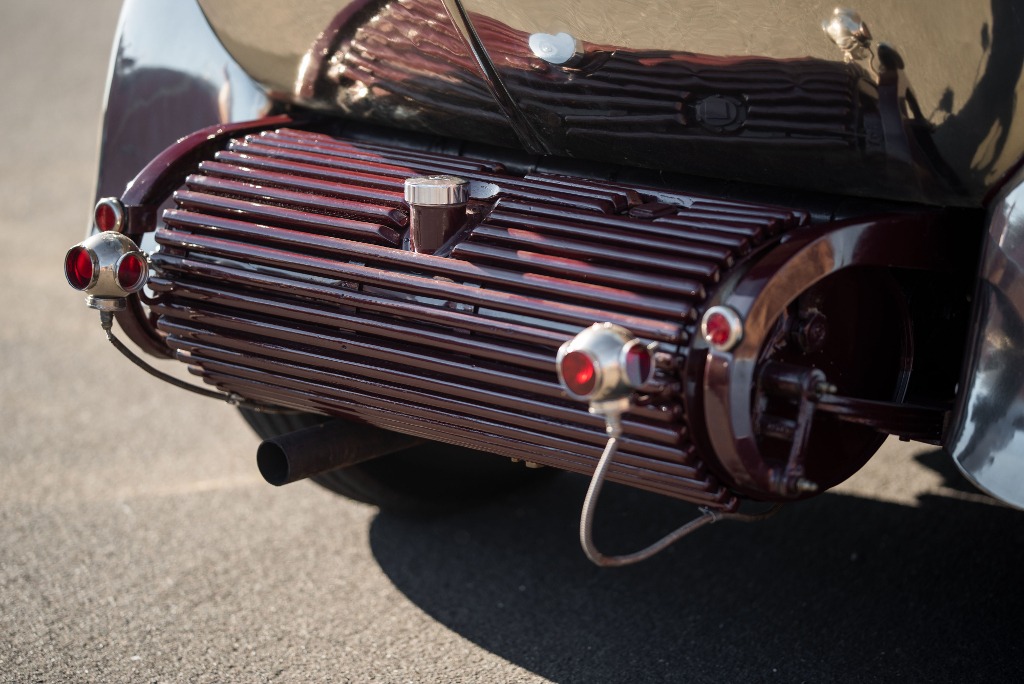 At the rear of the Star of India are the fuel tank and the Toby style tail-lights, with reflectors.

The Maharaja was able to enjoy the Star of India until he was forced to retire into exile in 1942. It was then used by his successor and it may have been during that period that the impressively ornate radiator ornament was added.

There was subsequently a story created that claimed the car had been abandoned in the jungle and had been rescued in the 1960’s by putting the car in a sling supported on its four corners by elephants. It would appear however that this lovely romantic story was a case of a journalist following the journalist’s motto of “Never let the truth get in the way of a good story”. Isn’t it funny that some aspects of journalism haven’t changed with the passage of time.

The Star of India nowadays resides in the United States and is prepared to be passed on to a new owner. It is scheduled to be offered for auction by RM Sotheby’s at their Monterey Auction which will be held between 18-20 August 2022.

You will find the auction page for this car if you click here.

Although, sadly, the royal sport of Shikar is no more, yet the Star of India could still gift its new owner with a taste of times gone by at the height of the “Raj” when India was the exotic and tempestuous “Jewel of the British Empire”. It would indeed be a comfortable hunting car whatever one was hunting for, even if the hunt were not for Shere-kan.

Photo Credits: All pictures of the Daimler “Star of India” by Darin Schnabel courtesy RM Sotheby’s.