The Era of Hope

When the world emerged from the carnage that had been World War II people were not only filled with hope – but they were a generation that had fought and won a desperate war against murderous authoritarian evil that prohibited freedom of thought and freedom of speech, which had sought to impose racist eugenics and the crushing conformity of the “Goose Step” on humanity.

The zeitgeist of the people who were faced with the task of rebuilding our civilization, and their own lives and families, was one of determined optimism. People were fascinated by visions of the future, imagining that by the 21st century we would be driving around in flying cars, flying in supersonic aircraft across the world, perhaps even taking a holiday excursion up into space.

It was into this environment that a visionary at motor-home manufacturer Winnebago came up with an idea that might have initially sounded silly, but it fitted perfectly with that future looking zeitgeist that pervaded the United States and other Western countries – that idea was not just for a flying car, but for a flying motor-home.

A Vision for the Future

With the end of the Vietnam War there were ex-military Sikorsky helicopters that were surplus to Uncle Sam’s requirements that were up for sale, and the visionaries at Winnebago shaped their vision for a flying motor-home around those. The good folks at Orlando Helicopter Airways were brought in, given that they had the expertise that Winnebago did not have, and the project was planned out in detail. The pastor of my church back when I was living in Hong Kong often used to say “Preparation precedes blessing”, and the management at both Winnebago and Orlando Helicopter Airways seem to have understood this principle well.

The concept of the Heli-Home was both intended as a serious manufacturing idea, and also of course as a “Halo project” to bring publicity and prestige to the company – and to Orlando Helicopters who partnered with Winnebago for this project.

Just who did Winnebago and Orlando Helicopter Airways imagine would be the customers for a helicopter camper or motor-home? It was always going to be for the well heeled who had a penchant for “glamping” rather than old fashioned camping: people who could afford a helicopter pilots license and who might already have a pilots license.

The Vision Becomes a Reality – at a Price

Before the joint project with Winnebago began Orlando Helicopter Airways was already buying ex-military Sikorsky helicopters and converting them for various civilian uses in passenger and cargo carrying: so they already had a business converting these machines and supporting them.

The cooperative project was begun in 1975 by the Itasca division of Winnebago, and by 1976 the first Heli-Camper based on the smaller S-55 helicopter made its public debut.

Although the S-55 (military H-19) version was initially called the Heli-Camper later that name was dropped and the name Heli-Home was used instead. The S-55 version was powered by an 800 hp Wright R-1300-3 aviation radial engine. The larger S-58 based Heli-Home was powered either by a 1,525 hp Wright R-1300-3 radial piston engine or a 1,800 hp Pratt & Whitney PT6T-3 Twin-Pac gas turbine, depending on what was fitted in the surplus helicopter when purchased from the government.

The S-58 Heli-Home was equipped to sleep up to six people and featured 115 square feet of space. It was fitted with a 3.5 kW generator to provide independent AC power, a water tank to provide for the bathroom and shower,  a full featured kitchenette, and convertible seats that could be folded out to become beds.

It came fitted with 6,000 BTW air-conditioning and heating to ensure passengers were comfortable in a wide range of weather conditions. 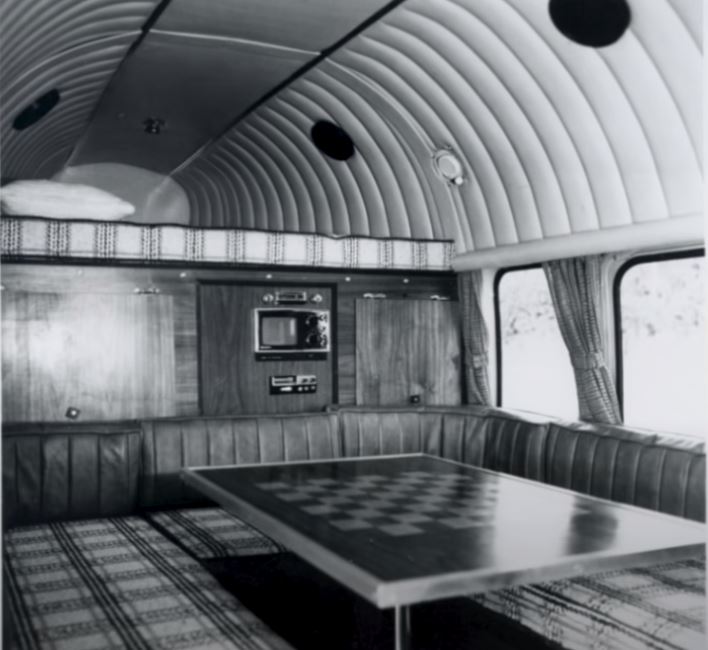 The interior of the Winnebago Heli-Home was quite luxurious, as befitted its very high price tag. The master bed is visible above the rear bulkhead.

The Heli-Home was also fitted with state of the art entertainment devices which included a colour television and an 8 track sound system. (For those who are too young to remember the 8 track tape audio system this was the competitor to the Phillips audio cassette tape. The 8 track cassettes were much larger than a Phillips cassette but delivered superior sound quality.)

The result was a luxurious and surprisingly spacious flying mobile home. 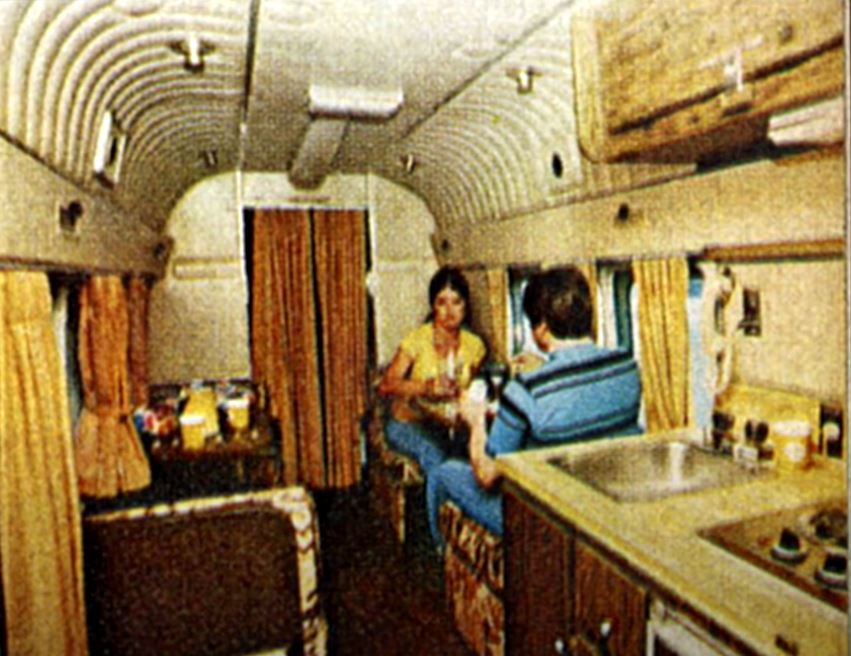 The interior of the S-55 based Winnebago Heli-Home was smaller than the S-58 based Heli-Home but was still luxurious with efficient use of the more limited space.

One of the attractions of a helicopter camper was that it could get into places that were inaccessible by other means. It was important that the helicopter could be fitted with floats so it could land on water when needed, and this option was offered – so you could land in your favorite fishing spot for example – just imagine, you could simply open the side door, cast out your line, and wait for “the big one” to bite while your coffee was brewing on the stove.

The Heli-Home caught the attention of Popular Mechanics magazine and their feature on it certainly captured the imagination of its readers, many of whom would without doubt have loved to own or rent one. 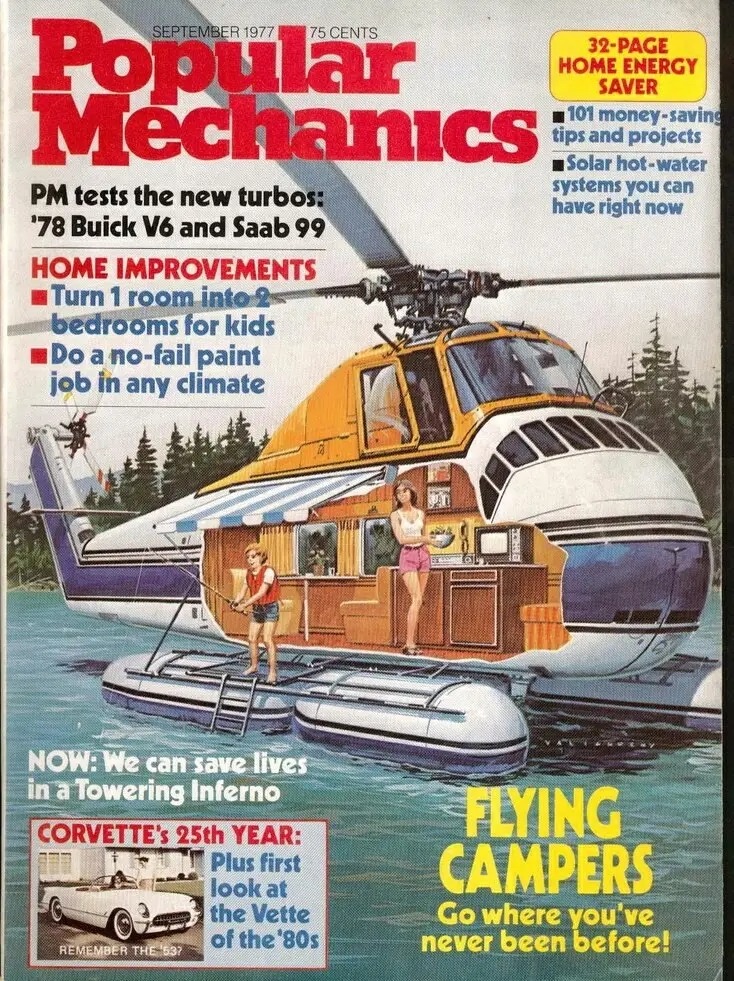 The Winnebago Heli-Home was featured in the September 1977 issue of Popular Mechanics magazine.

Popular Mechanics was a magazine that was hugely popular with Dads and sons. It was something that fired imaginations and got people actively involved in practical projects in the real world in the years before people became immersed – even addicted – in the digital world of screens and passive entertainment. 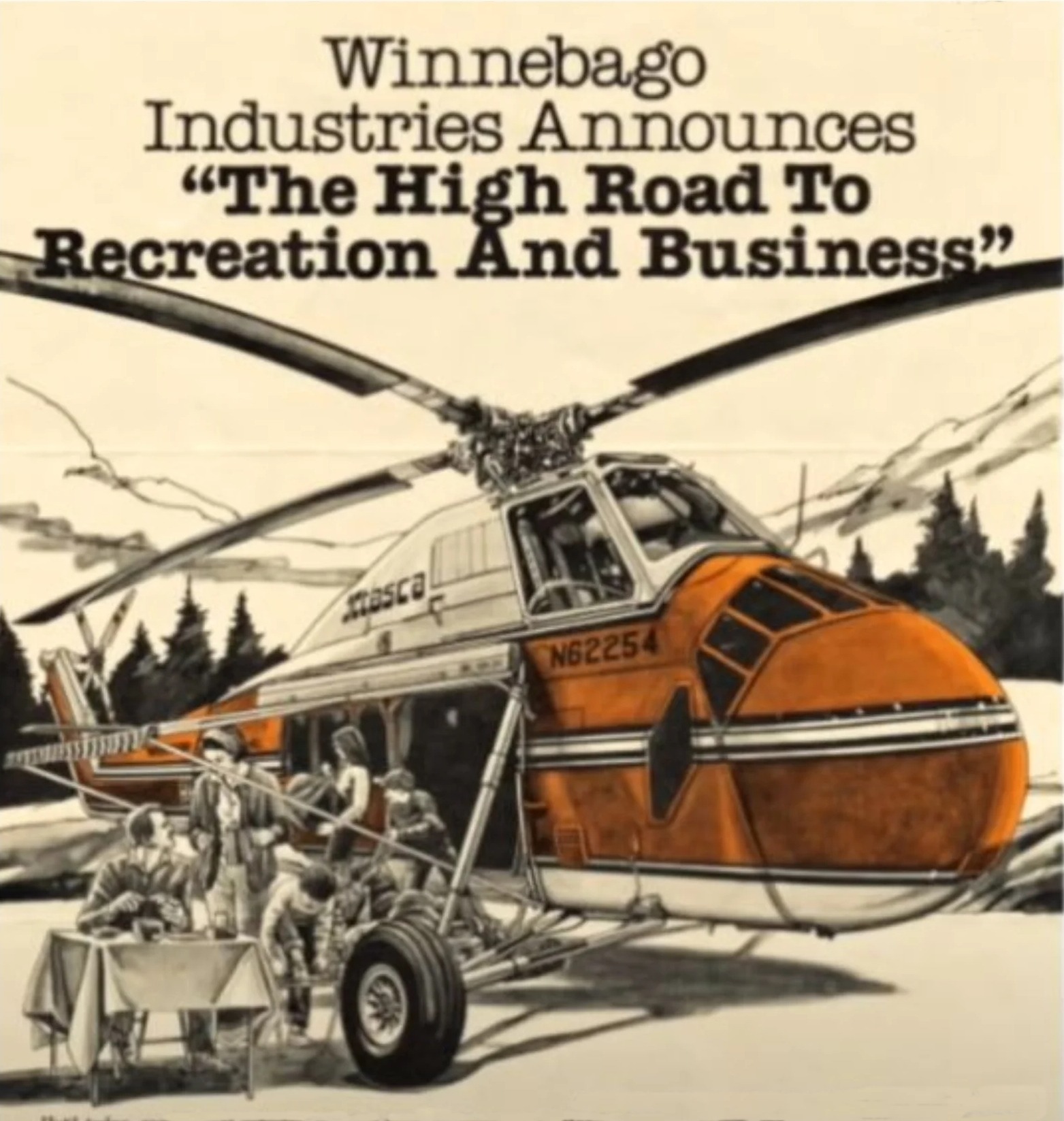 This Winnebago advertisement paints a picture of amazing adventures enjoyed from the comfort and safety of your Winnebago Heli-Home.

Though the Winnebago advertising and articles such as the one published in Popular Mechanics successfully captured people’s imaginations there were some significant barriers to seeing those dreams fulfilled. First was the purchase price. The base small Winnebago Heli-Home was priced at around US$180,000 in 1976 prices. In 1976 $2,000 would buy you a nice new car, so you can well imagine what that price would look like if it were offered today.

The larger Heli-Home was priced at US$300,000 which was almost double, and translates to almost a million dollars at modern values. So these helicopter mobile homes were only going to be purchased by extremely wealthy people who could afford to sink that much money into a depreciating asset.

The purchase price was only the first barrier to ordinary people fulfilling their dream of owning a Winnebago Heli-Home. The next barrier was the cost of running the dream machine. The fuel tank held 120 US gallons and the helicopter consumed all that fuel in three and a half hours depending on load and conditions. Given its cruise speed was between 100-110 miles per hour that gave the Heli-Home a range of about 300 miles, and then it was time to pull up at a suitable fueling stop, pull out your wallet, and hand over enough greenbacks to fill that tank up again.

The next cost was of course maintenance. The Heli-Home could cruise at altitudes up to 8,000 feet and the thing that made it safe to do that was the reliability of the engine and flight systems. Helicopters are especially fussy in this regard. A fixed wing aircraft can glide in the event of an engine failure and that normally enables the pilot to find the safest place to get the aircraft back down on the ground. Helicopters have a bit of a glide ability but not much, its a lot less than a fixed wing aircraft: so excellent maintenance is mission critical.

The last item was the matter of the helicopter pilot’s license – or alternatively hiring a pilot to fly your Heli-Home for you. 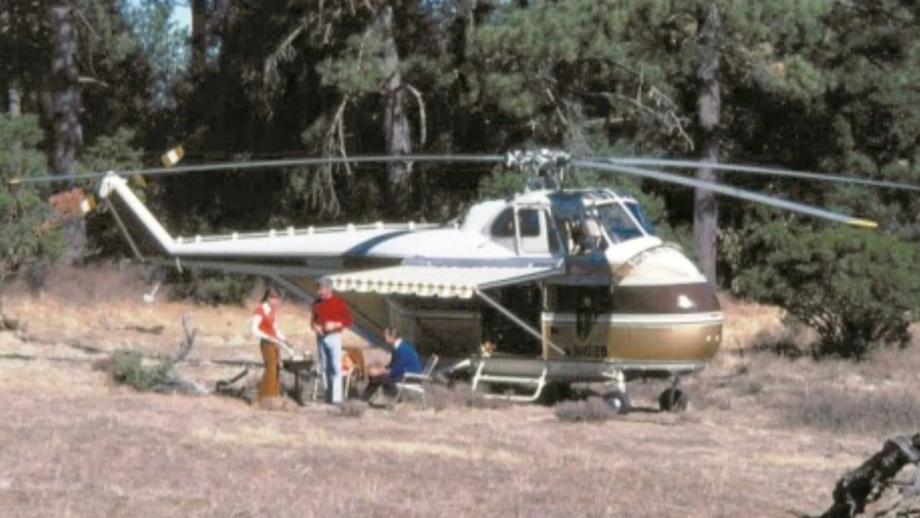 The Winnebago Heli-Home promised freedom and adventure – but at a price to high for almost everyone.

In all Winnebago managed to sell half a dozen Heli-Homes, perhaps as many as eight, and then they stopped offering them. The combination of cost and difficulties maintaining and operating were just too high. None exist today other than one that was converted back from being a Heli-Home to being in its original military form and taking its place in a museum.

As those of us who were born at the end of the Second World War will attest, the dreams we had of our future in the twenty-first century did not materialize in the way we thought they would.

But the Heli-Home is a fabulous reminder of the things we thought would be possible.

The Winnebago Heli-Home: a reminder of what might have been.