The Browning BAR sporting rifle is not the same as the John Moses Browning BAR of World War I fame. The BAR sporting rifle is a design that was created with the input of Val Browning’s son Bruce Warren Browning, working in collaboration with a design team led by Marcel Olinger. The BAR sporting rifle was designed not as a combat rifle as the 1918 BAR had been, but as a sporting rifle. Not only that but given the problems that can be encountered with legal possession of a semi-automatic rifle in some jurisdictions the BAR was sensibly designed to be legal in the most places possible. This is, I suspect, the reason for the detachable magazine to be mounted on a hinged floorplate which makes it much slower to reload than a rifle with a detachable magazine that can be dropped out and replaced. The video below, courtesy IowaGunGuy YouTube channel demonstrates loading and firing a half dozen shots. The Browning BAR is not a rifle you would take into a fire-fight against people armed with AK47’s or such like and expect to come out alive; its a sporting rifle, not a combat rifle; and its a great sporting rifle.

The sporting Browning BAR underwent its design phase in 1966 with the rifle being debuted to the shooting public in 1967. When introduced to the public the design of the BAR can best be described as not yet fully evolved as can tend to be the case with most things created by human beings. The rifle was available with right or left hand safety catches, but these were not interchangeable and it had a complex trigger mechanism that could not be removed for cleaning unless the butt stock was first removed. But although the early models were not yet as refined as they would later become the BAR did well and steadily gained a reputation for decent accuracy and good dependability.

As most of you will already know a semi-automatic rifle has more potential sources of failure than a bolt action or double barrel. The time when a shooter will accept those potential sources of failure is when he or she expects to need a fast follow up shot or two such as may be the case hunting in medium to thick cover in the woods where a quarry that is not instantly anchored can hop out of sight before a bolt or lever action can be operated. This is the sort of scenario in which a Browning BAR really comes into its own. Over the years Browning have worked on getting any bugs or design faults fixed on the BAR so that the Mark II is, in many people’s view, a near perfect self loading hunting rifle that delivers a high degree of dependability. Those upgrades have included a re-designed trigger system that is more easily removable for cleaning, and a gas operating system with improved reliability. The Mark II also had a slide stop lever added so that the action can be held open independent of whether the magazine is inserted or not.

The Browning BAR Mark II Safari rifles are available either with or without the BOSS barrel tuning system. The BOSS is a feature that some shooters will want and that some will not. Barrel mounted tuning devices are all the rage amongst the benchrest shooters at my local shooting club but whether or not you will want one on your hunting rifle will be a matter or personal choice. Personally I would not want one adding to the length and weight of the barrel, but that is just personal preference. Without the BOSS system the between the hands balance of the BAR Mark II is allowed to really shine; the mass of the forged steel action providing the rifle with well centered weight that accentuates its fast handling attributes. Barrels of the BAR Mark II Safari are hammer forged. 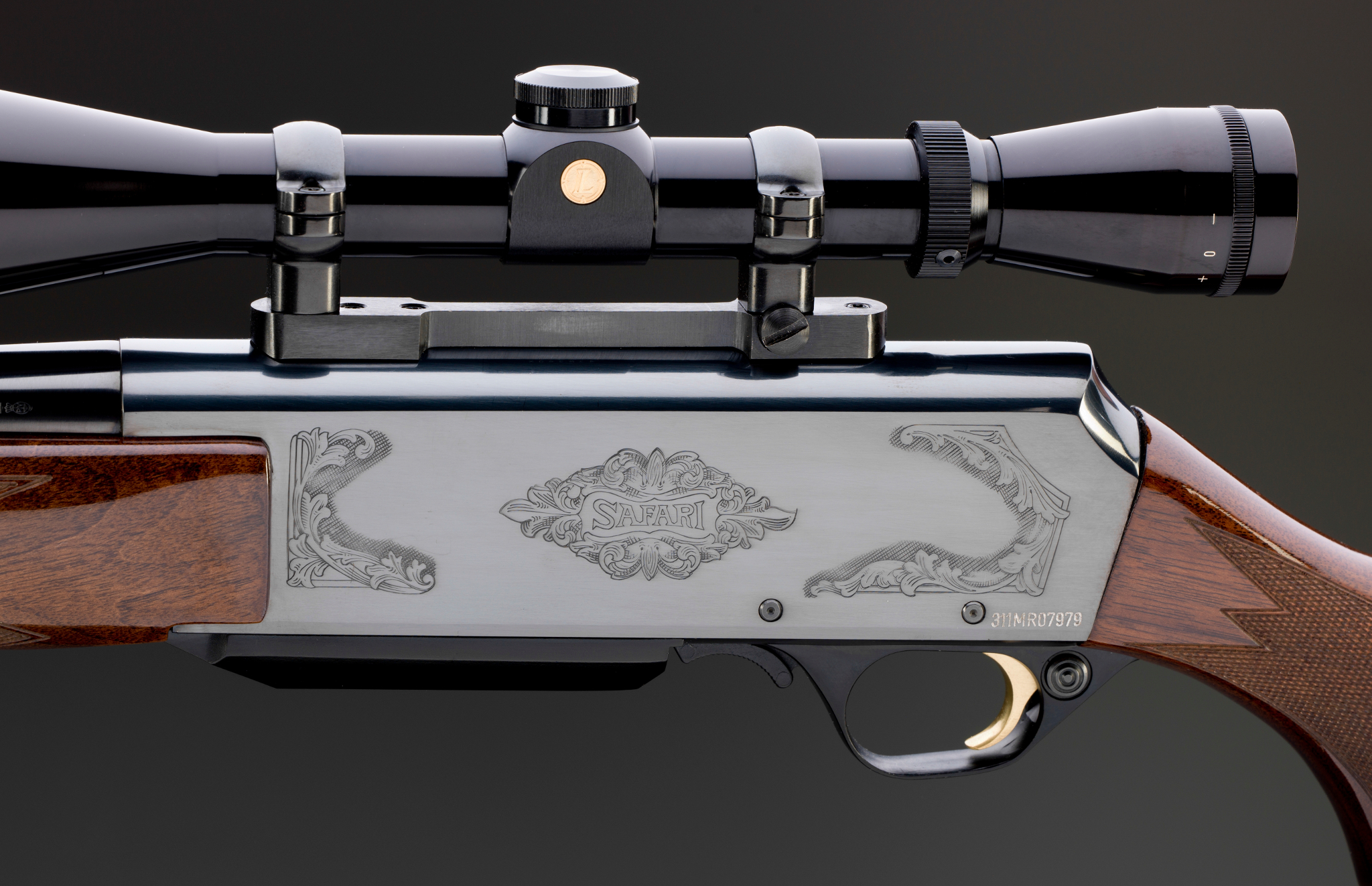 The engraving on the BAR Mark II Safari is neat and restrained. Safety catch is a simple cross-bolt type.

There are advantages and disadvantages inherent in using a self-loading rifle. The obvious advantage is the ability to get a second shot away as quickly as can be accomplished with a double barrel gun, and the reduction in felt recoil because the self-loading action absorbs some of the recoil energy making the rifle more docile to shoot. The disadvantages are, first and foremost, that a self-loading rifle requires more maintenance than a bolt action or a double. In order to keep it running dependably a self-loader must be maintained.

You’ll find the Browning manual with maintenance instructions for the BAR Mark II at Browning’s web site if you click here.

The second thing to watch for is that a self-loading rifle is not going to be as ammunition tolerant as a fixed breech action such as a bolt action. The Browning BAR Mark II Safari has an excellent reputation for dependably functioning with a wide range of factory ammunition although with a self-loading rifle it is important to read the box of new ammunition because some types are not suitable for self-loading rifles and there will be a printed warning on the ammunition box. For handloaders there will be a need to keep your reloads in the range that the self-loader functions well with. Handloaders do not have the same flexibility in tuning loads to a self-loading rifle as they do for a bolt action. This is something the BOSS system can be used to compensate for if you have chosen to have your rifle fitted with one. A self-loading rifle is not necessarily the optimum choice for a handloader because it will eject fired cases well clear of the rifle so you will need to search for them to retrieve them and you will likely have to deal with damaged necks from where they’ve hit the ground. 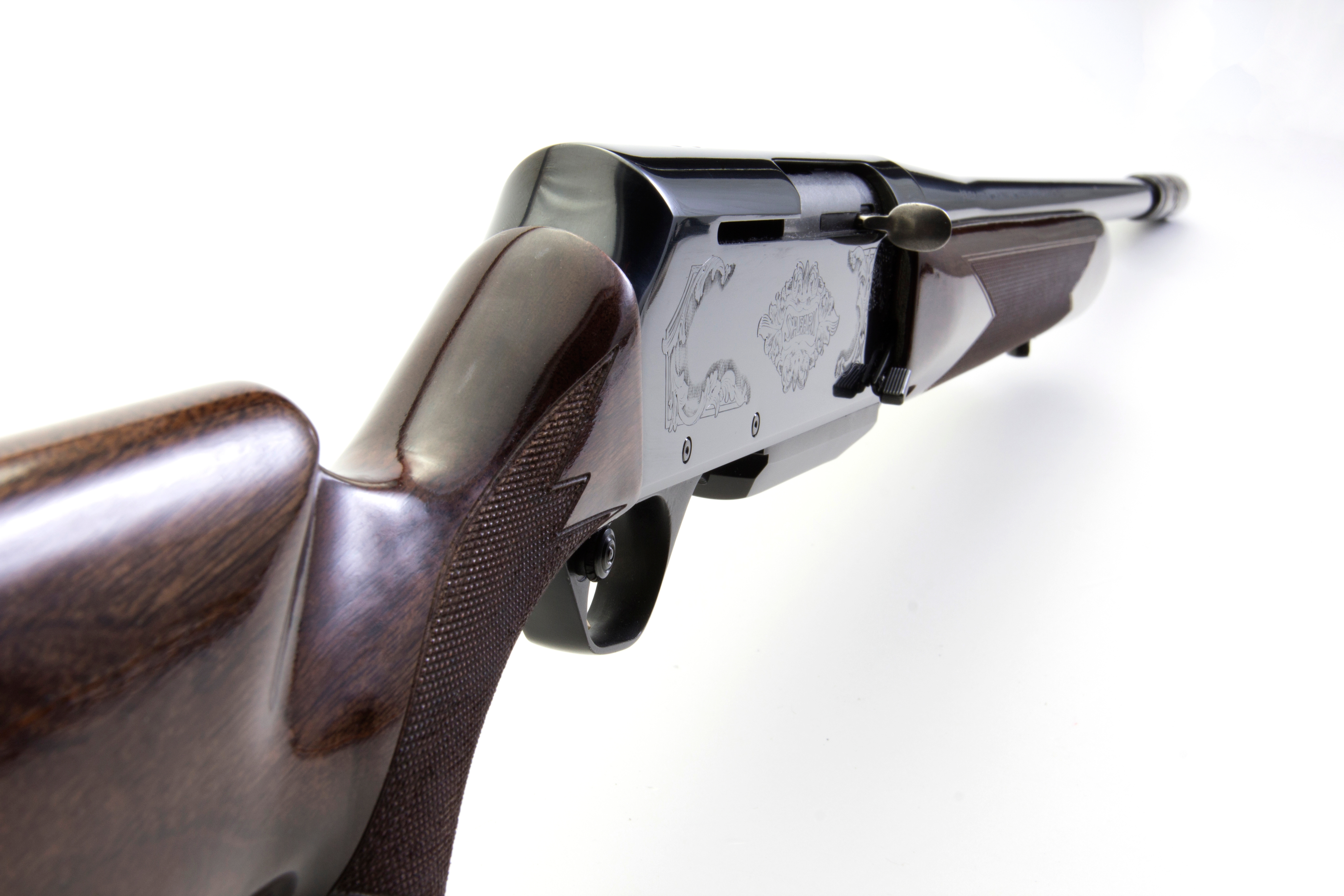 The safety catch of the BAR Mark II is convenient. The bolt hold open lever is visible at the front of the action.

The last disadvantage of a self-loading rifle is that you should not expect a trigger of the same standard as on Winchester’s current Model 70 for example. The self-loading mechanism has more to do than the trigger on a bolt action or double and so you need to expect it to be relatively heavier and likely with a trace of detectable creep. For fast shooting this is not an issue and the BAR will be in its element if used in fast action scenarios like a shotgun.

Right side engraving of the 100th Anniversary rifles commemorates the M1918 military BAR at war.

The Browning BAR Mark II Safari is the more expensive version of the BAR and there are less expensive versions that have alloy receivers. Our preference is always for steel and walnut with classic design. If you are looking for a self-loading sporting rifle then the BAR Mark II is one of the best on the market today. It’s a rifle that will give many years of faithful service as long as the owner does their part by looking after it and feeding it a diet that it likes.

You will find the Browning BAR Mark II Safari rifle on Browning’s web site if you click here.

You will find the Browning BAR Mark II Safari rifle with BOSS system if you click here.

You will find the Limited Edition 100th anniversary model if you click here.

Left side of the 100th Anniversary model features the sporting BAR.