I remember the first time I saw someone shoot a .357 Magnum revolver very clearly. At the time I was completely new to the shooting sports and had joined a pistol club down in outback Australia. It was the night after a shoot and one of the guys had purchased a Ruger Blackhawk in .357 Magnum and some factory ammo for it. So a few of us ventured out to the firing point, which was covered so it was like a tin shed with one side open so you could shoot at the targets. The Ruger was duly loaded up and he took the classic pistol club one handed offhand stance and squeezed the trigger. The first thing that hit me was the noise it made. To my young ears unaccustomed as they were to things that make very loud bangs it sounded and felt like the iron shed jumped three inches off its foundations and dropped back down. Being night time there was a spectacular muzzle flash as well so it really was a fireworks show. A few of us got to have a shot and yes it certainly booted rather harder than the .38 Special I was used to. And then, as if to indelibly impress on each of us just how power packed this revolver was the owner took a shot and there was not only the bang of the gun going off but a clang on the roof of the shed. The front sight had come off. The solder that held it on had given way and it was conspicuous by its absence. So we all played “hunt the front sight” in the dark and the front sight was found, and subsequently re-united with the barrel.

Author’s first hands on experience with a Smith & Wesson Model 27 was with a nickeled version such as this one. (Picture courtesy Rock Island Auction).

It was months later when I first got to see the power of the .357 Magnum cartridge on game. I was out on a cattle station (i.e. ranch) with the owner when we happened upon a medium to large kangaroo. The pastoralist wanted meat for his dogs and he used a .357 Magnum to shoot the kangaroo in the chest at no more than thirty yards. The ‘roo was literally thrown off his feet and unceremoniously dropped to the ground. It was an instant humane kill and the effect of the bullet was impressive to say the least. Suffice to say the dogs were slobberingly happy on their stewed ‘roo treat and I had developed a great respect for the .357 Magnum. 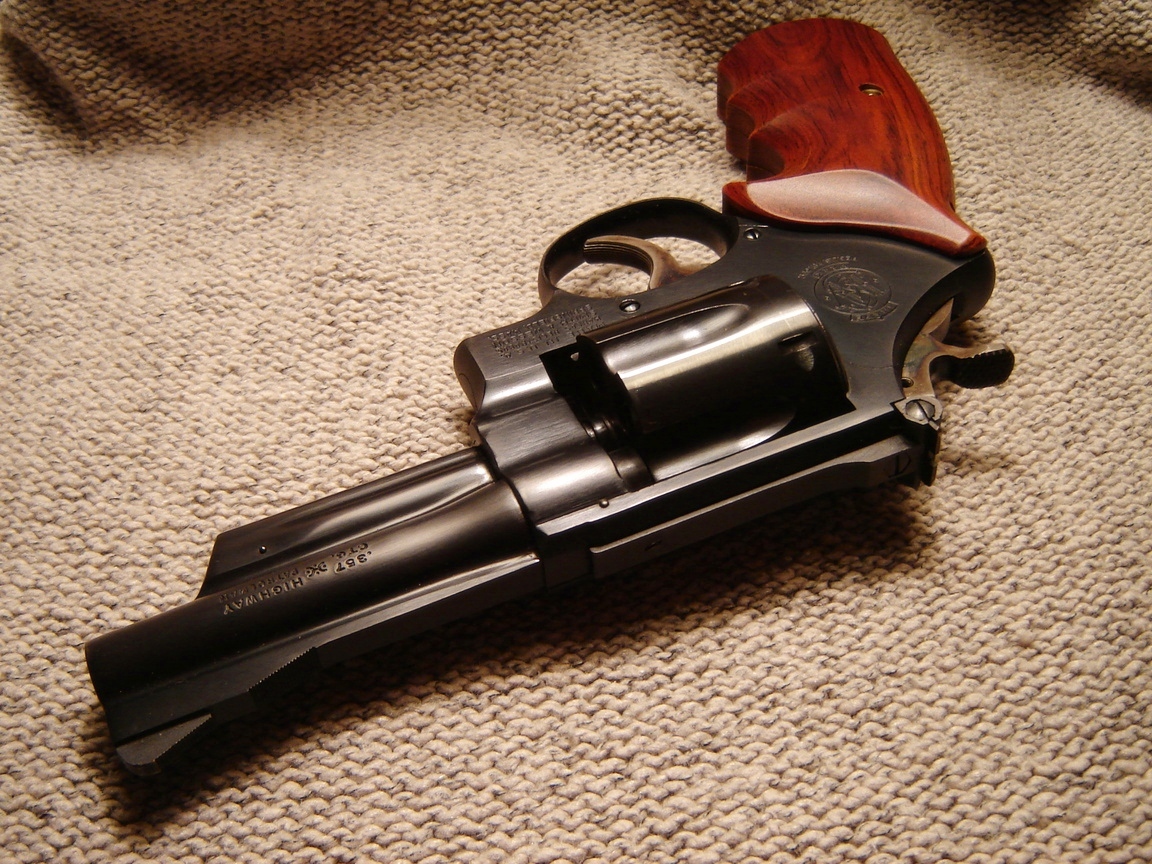 The cheaper and more utilitarian model of the Smith & Wesson Model 27 was the Model 28 Highway Patrolman. These revolvers did not have the checkered top strap of the standard Model 27 and were finished in a lower level of polish. (Picture courtesy lonelymachines.org).

The first of the .357 Magnum revolvers was the Smith & Wesson Model 27. Born of necessity in the twenties and thirties when police officers discovered that robbers and gang members in cars and even wearing bullet proof vests were not easily stopped by the standard 38 Special revolvers they carried. Police with Thompson sub-machine guns typically did not have so much difficulty stopping the bad guys and girls in cars but Thompson’s were large and expensive and perhaps even back in those prohibition and post prohibition times the sight of a police officer on a motorcycle with a Thompson in a front scabbard was not going to look good to members of the peaceable general public. Officers needed and wanted a revolver with significantly more stopping power than the standard .38 Special. 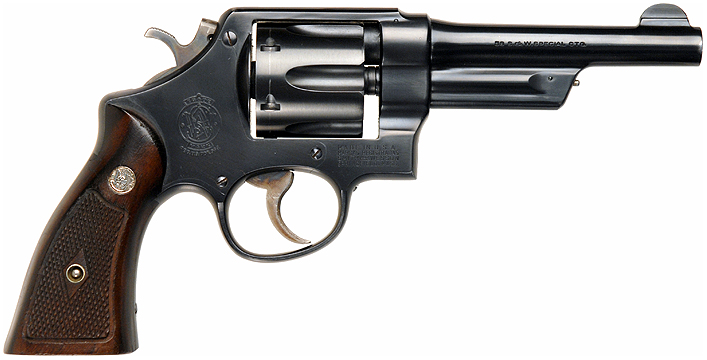 Smith & Wesson answered the call using the N Frame that had been developed in 1907 for larger cartridges such as the .44 Smith & Wesson Special. This frame was fitted with a beefed up .38 Special cylinder and the cartridges were loaded to higher pressure and velocity than standard .38 Special rounds. This cartridge was designated the 38/44 and the revolver known as the Heavy Duty, and later in 1957 when Smith & Wesson adopted the numbering system the Model 20. The 38/44 cartridge went by a number of other names such as the .38 Super Police, .38/44 High Velocity, and .38/44 High Speed. None of these cartridges are safe to chamber in a standard .38 Special revolver. The revolvers themselves are simply marked .38 Special. So you can see there was and still is a potential for danger if someone tries to fire a 38/44 in a standard K Frame or similar .38 Special revolver. The result is likely to be a tad more dramatic than my friend’s ejecting front sight and there are better ways to meet pretty nurses than arriving in Casualty with part of your hand missing.

As an aside there is a lesson in history here for those who keep advocating “gun control” with the idea that law can somehow solve a social problem. Prohibition was introduced to solve a social problem – i.e. drunkenness and the anti-social behavior associated with it. However, the actual result of prohibition was the creation of a black market for bootleg liquor and a money making opportunity for people to organize into crime syndicates and gangs to cash in on this legally created illegal commercial opportunity. The Wall Street Crash simply fueled this even more and in places such as Chicago this phenomenon, created by the passing of a mis-guided law, still exists. Instead of bootleg liquor the gangs now make their money from other drugs, and related industries such as the sex trade. Those who created the law did not foresee the results that would come just as the advocates of “gun control” simply don’t foresee the results that it would almost certainly produce. In a nutshell, the high powered Smith & Wesson 38/44 revolver was created because of the need created by the Prohibition Act of 1920. Criminal minds are often creative minds. 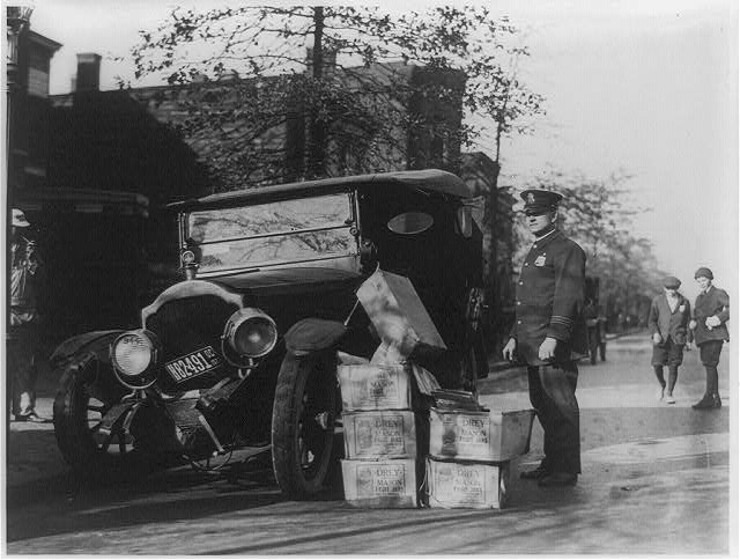 So we see that the Smith & Wesson Model 27 and the .357 Magnum cartridge owe their creation in no small part to the Prohibition Act of 1920. The 38/44 Heavy Duty police revolver sold well so Smith & Wesson decided to bring out a “civilian” version which they called the Outdoorsman and it had a 6½” barrel.

If you would like a manual for the Smith & Wesson Outdoorsman you will find one in downloadable PDF format if you click here. (Courtesy stevespages.com). 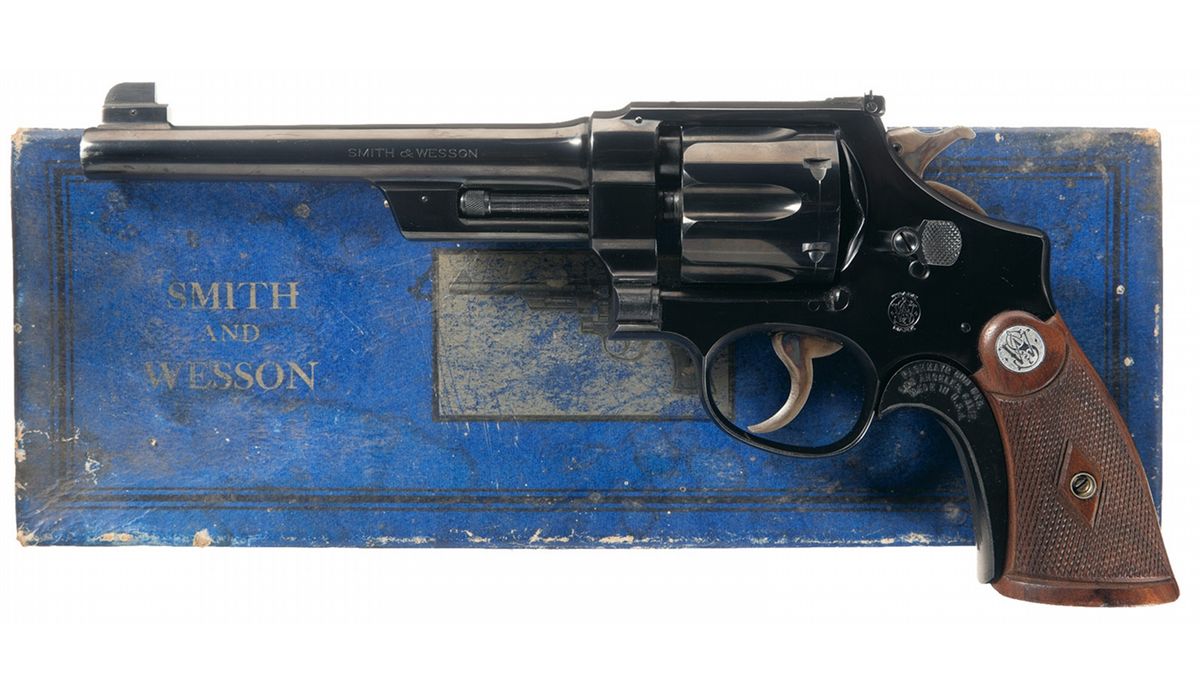 Pre-war Smith & Wesson Outdoorsman with 6½” barrel chambered for the 38/44. Note that this revolver has target sights. (Picture courtesy icollector.com).

The Smith & Wesson Outdoorsman was reviewed by a gentleman named Phil Sharpe in a 1931 edition of the American Rifleman. Sharpe extolled the virtues of both the revolver and the cartridge but lamented the lack of target sights on it. Smith & Wesson were quick to seize the opportunity and that same year the Outdoorsman appeared fitted with target sights. The majority of shooters were happy, and Phil Sharpe began experimenting with higher and higher pressure loadings in the Outdoorsman revolver. He had the opportunity to demonstrate these high pressure loadings to Colonel Douglas B. Wesson who was Vice President of Smith & Wesson on a hunting trip and the idea for a new cartridge was born. Phil Sharpe did not want to take the credit for the creation of the new cartridge, he had simply continued along the trail that Smith & Wesson had already started on. So the new cartridge was created with assistance from Winchester, including using a case that was .135″ longer than the .38 Special to ensure that .357 Magnum cartridges could not be chambered in a .38 Special revolver – not even one made on an N Frame for the 38/44. The new cartridge and the revolver for it made their debut in 1935 and the revolver and cartridge have been fabulously popular ever since.

The .357 Magnum was the most powerful revolver cartridge in the world right up until the creation of the .44 Remington Magnum about twenty years later. 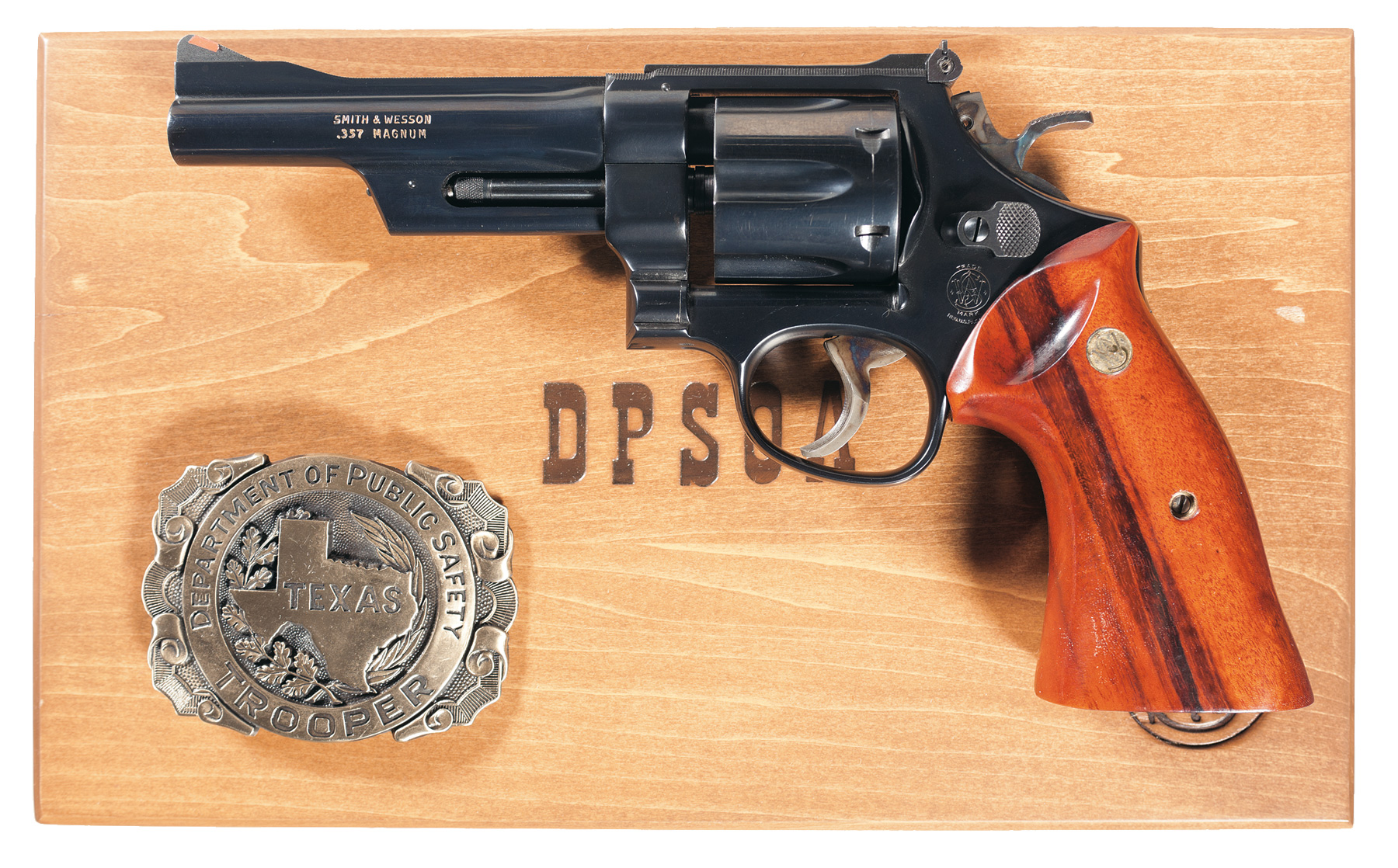 In 1935 the .357 Magnum was the most powerful revolver cartridge in the world. (Picture courtesy Rock Island Auction).

When first introduced in 1935 Smith & Wesson made this new .357 Magnum revolver as the “Registered Magnum”. Each was made to a customer’s requirements and barrel lengths were available from 3½” to 8¾” in quarter inch increments. Despite the fact that the effects of the Great Depression were still being acutely felt Smith & Wesson were swamped with orders and by 1939 they standardized production and simply called the revolver the .357 Magnum with standardized barrel lengths of 3½”, 5″, 6½” and 8¾”. By 1957 the revolver received its now familiar numeric designation of Model 27 and the more utilitarian Model 28 was also created with lower level of finish and lower cost. Favored by the FBI and handgun experts such as Skeeter Skelton who described the 5″ barreled version as the best all around handgun.

The Model 27 lives on and is currently listed by Smith & Wesson amongst their Classics. You will find the Model 27 on Smith & Wesson’s website; for the 4″ barrel version click here. For the 6½” barrel version click here. My own preference is for the 4″ barreled version which, I think, is about the best balanced revolver I have ever had the opportunity to use. As a target revolver using .38 Special ammo the extra weight provides a much better measure of stability over the K38. Load it up with full charge .357 Magnum hunting loads and it remains a steady and predictable revolver. Smith & Wesson’s Model 27 is, as Skeeter Skelton suggested, the best all around revolver extant.

To see the Smith & Wesson Model 27 in action we have the review video by hickok45 below.