There is an episode of “The Simpsons” in which Bart is faced with a huge dilemma. His father Homer insists that Bart will not be allowed to go to the Crusty the Clown Camp unless he actually manges to pass a test at school. Realising that he has done no study and has no chance of passing Bart gets down on his knees and prays for a “snow day” so he can have one more day to study for the test. Seeing Bart on his knees in prayer his sister Lisa comments “Prayer, the last refuge of a scoundrel”. But as it happens Bart’s prayer is answered and indeed it snows the next morning so he has one more day to study for the test. Had Bart’s school purchased a Bombardier Snowmobile school bus the snow would not have hindered Bart’s dreaded appointment with the test and the Crusty the Clown Camp would have had one less participant. 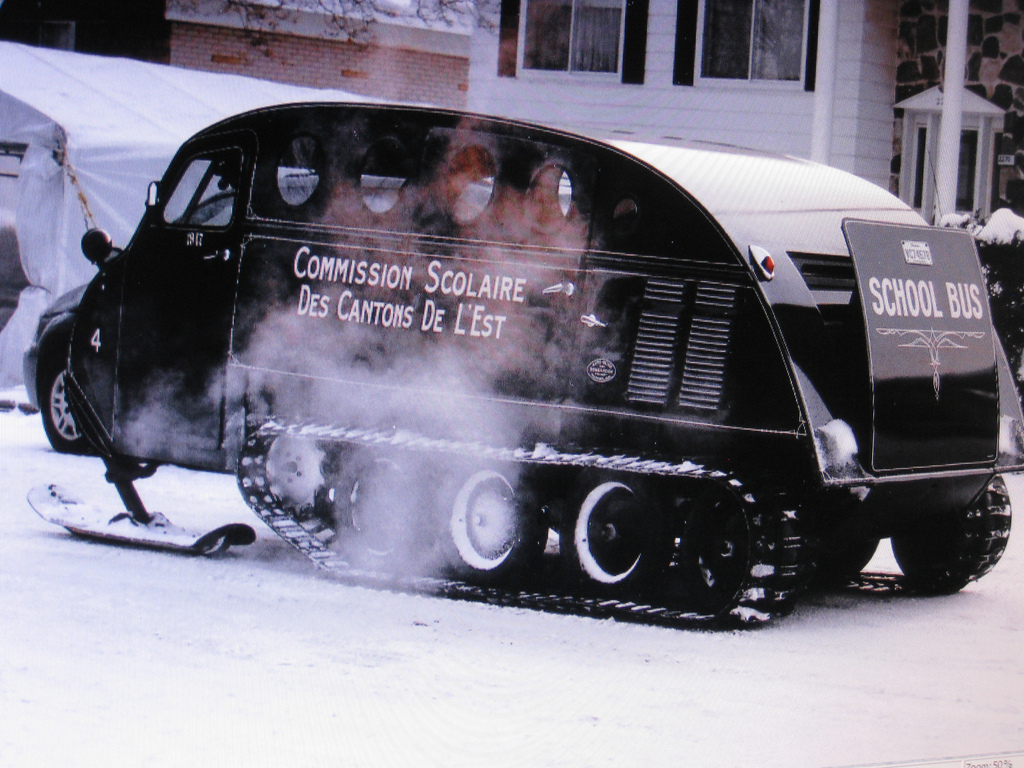 A Bombardier Snowmobile School Bus; just as well for Bart Simpson that his school did not have one of these. (Picture courtesy of flickr.com)

Joseph-Armand Bombardier, the creator of the Snowmobile and founder of the company that bears his name, was fascinated from his youth with the notion of creating a machine that could “float on snow”. His own search for a vehicle that would enable mechanised transport in snow was pushed into urgency after the loss of one of his own children for whom medical help could not be transported. So it was that the classic Bombardier “Snowmobiles” were created. 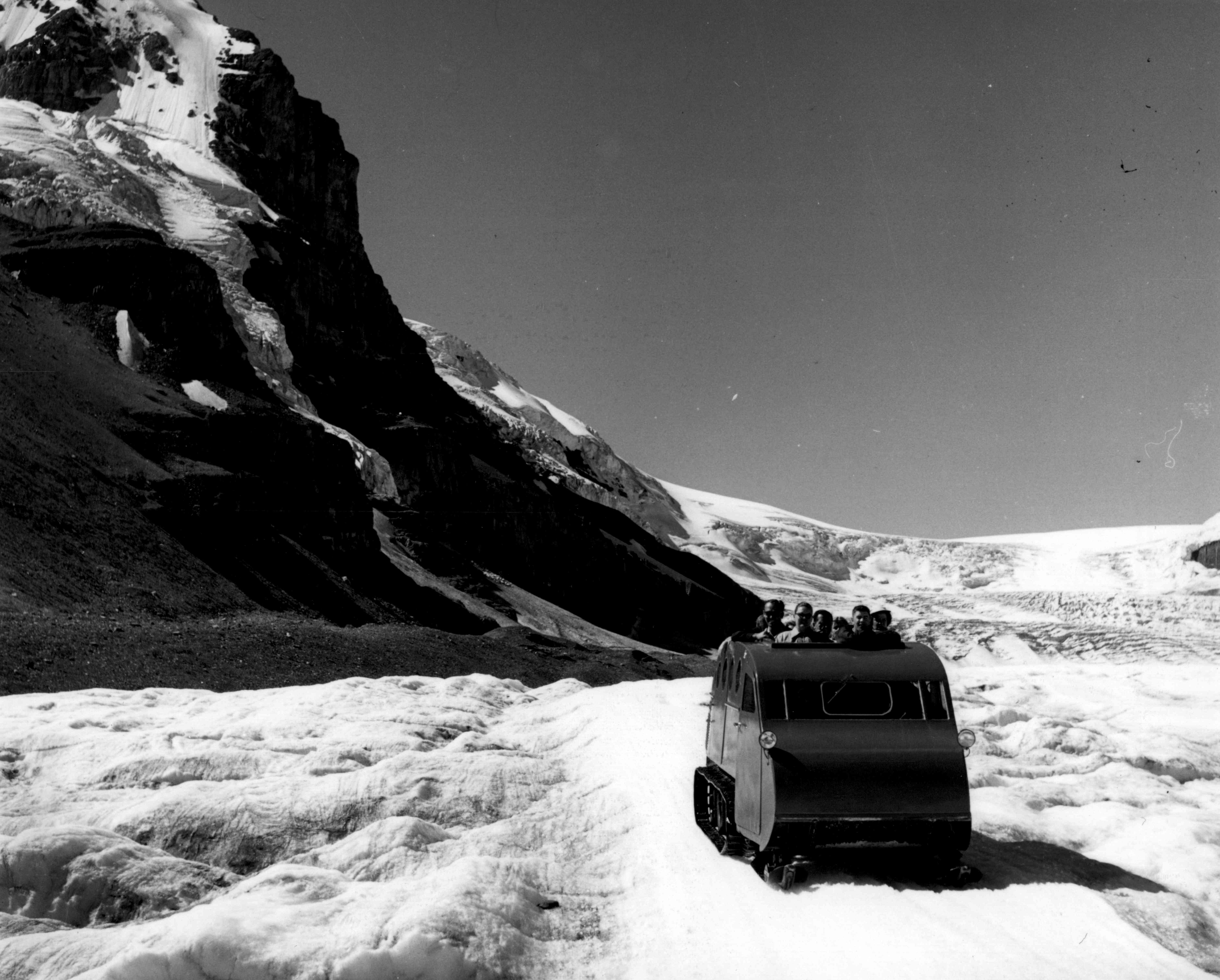 A Bombardier B Series Snowmobile at Jasper Park Lodge in 1953. (Picture courtesy innovationcanada150.com) 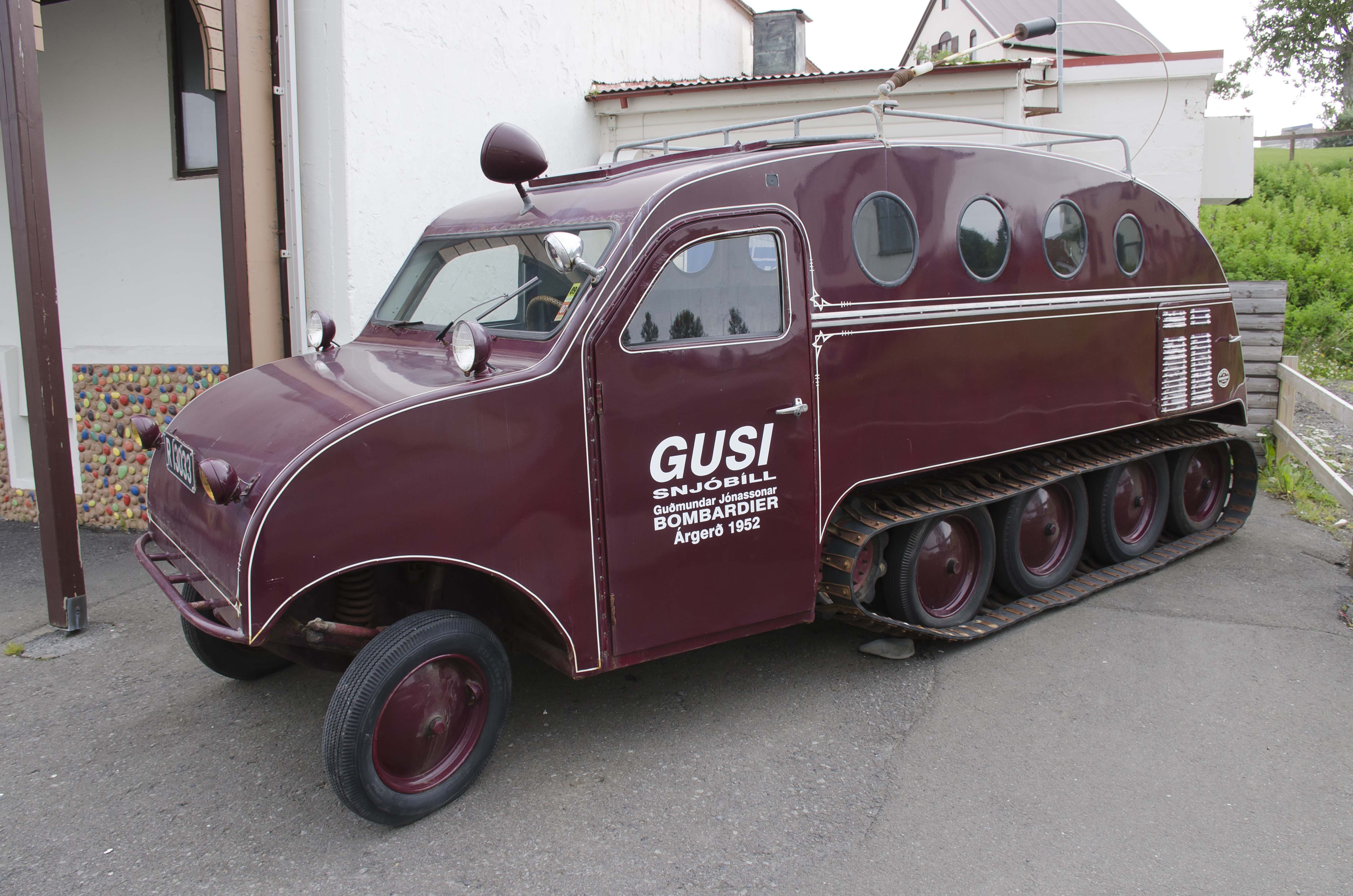 A Bombardier B12 Snowmobile with the front skis replaced with wheels for use in non-snowy all road and off road conditions. (Picture courtesy Wikipedia).

The original bodywork of the Bombardier B and the slightly wider C series was originally of wood, and the windows in the passenger compartment were porthole shaped for strength in the expected blizzard conditions in which these machines were expected to be able to reliably operate in. In 1951 Bombardier began making the snowmobile bodies of steel and later in 1969-70 provided new larger rectangular windows to make the passenger compartment more light and pleasant to ride in. 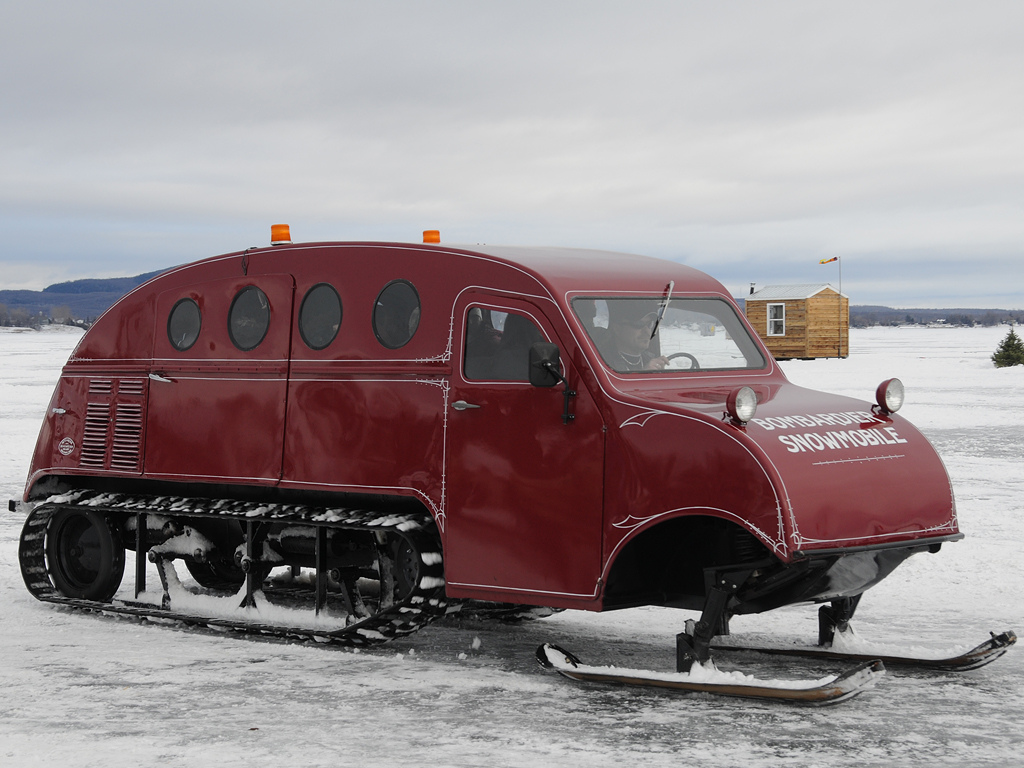 A later model Bombardier Snowmobile with rectangular windows, in use in Yellowstone National Park. (Picture courtesy Sean Becket at goodnature.nathab.com)

Joseph-Armand Bombardier had created his own sprocket wheel and track design in 1935 which he patented in 1936-7. This opened the door for him to get into manufacturing, begininng with his B7 model and then in 1941 his B12. 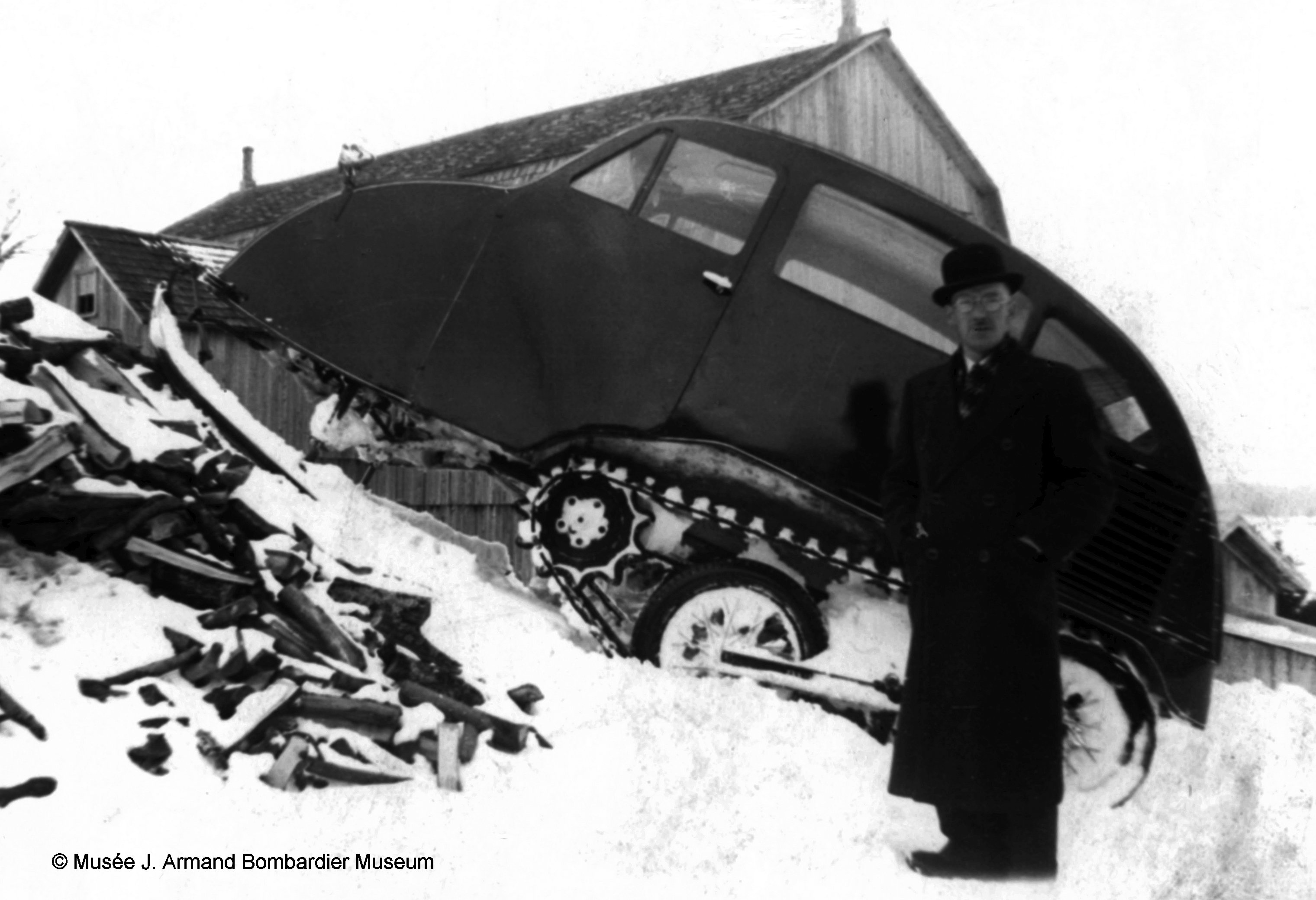 Joseph-Armand Bombardier with his B7 Snowmobile demonstrating that it can indeed “climb every mountain and ford every stream”. (Picture courtesy of museebombardier.com)

Engines for the Bombardier B12 changed over the years. In the fifties the common engine was the six cylinder Chrysler flat head mated to a three speed transmission. During the sixties Bombardier began to use V8 engines and then moving into the seventies Bombardier adopted the industrial Chrysler 318 engine mated to an automatic “Loadflite” transmission. Production of these snowmobiles continued into the mid/late seventies.

Bombardier, the company, moved on from the B7 and B12 Snowmobiles to become a company that produces aircraft and trains in addition to all sorts of interesting vehicles, including the Skidoo, and they produced the Volkswagen Iltis 4WD for the Canadian military. But the B7 and the B12 are the “bread and butter” machines that allowed Joseph-Armand Bombardier to establish his company and to become a household name in Canada, and indeed throughout the world. 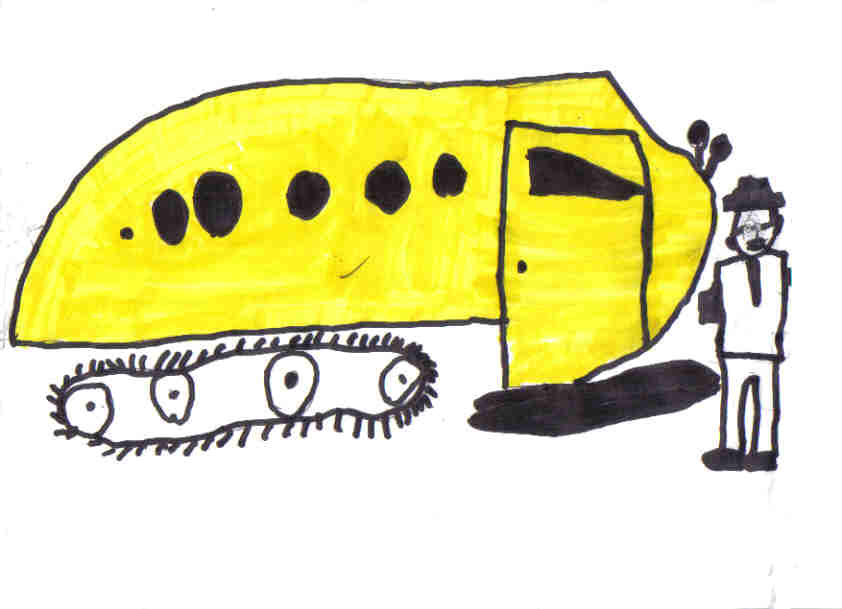 A child’s drawing of Joseph Armand Bombardier with a B12 Snowmobile appropriately painted school bus yellow. (Picture courtesy of fameimages.com)

(The feature image at the head of this post is courtesy of innovationcanada150.com)