If you’ve had a dream to own an Aston Martin DB5 made in the same year the James Bond movie Goldfinger was made and you have at least half a million pounds Stirling burning a hole in your pocket then you could well turn that dream into reality next Friday 26th June at the Goodwood Festival of Speed.

Just to set the mood surrounding the mystique of the Aston Martin DB5 let’s start with the Goldfinger opening titles. 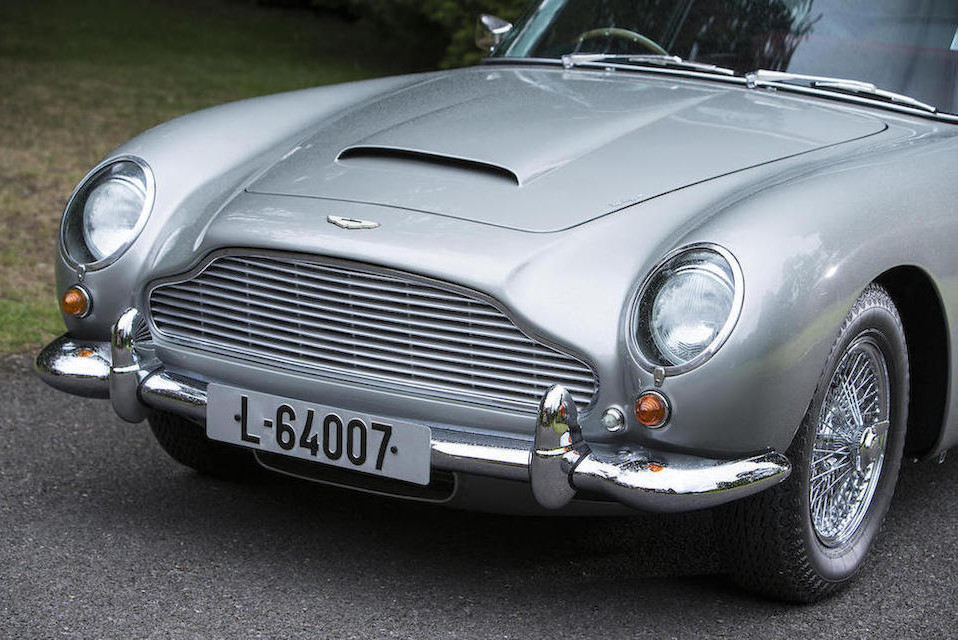 The license plate says it all.

Certainly the movie did no harm to Aston Martin’s sales. The DB5 quickly became the iconic Aston Martin and the sales value of silver grey DB5’s is an assured thing even though they don’t have the twin Browning machine guns, revolving number plates valid in every country, oil slick dispenser, rear bullet proof screen and the passenger ejector seat that gave rise to that classic saying “I never joke about my work 007”. Even without all those lovely “toys” an Aston Martin DB5 is a wonderful “toy” in its own right. And be compensated, the absence of the weight of all those extras means your stock standard Aston Martin DB5 will be somewhat faster. 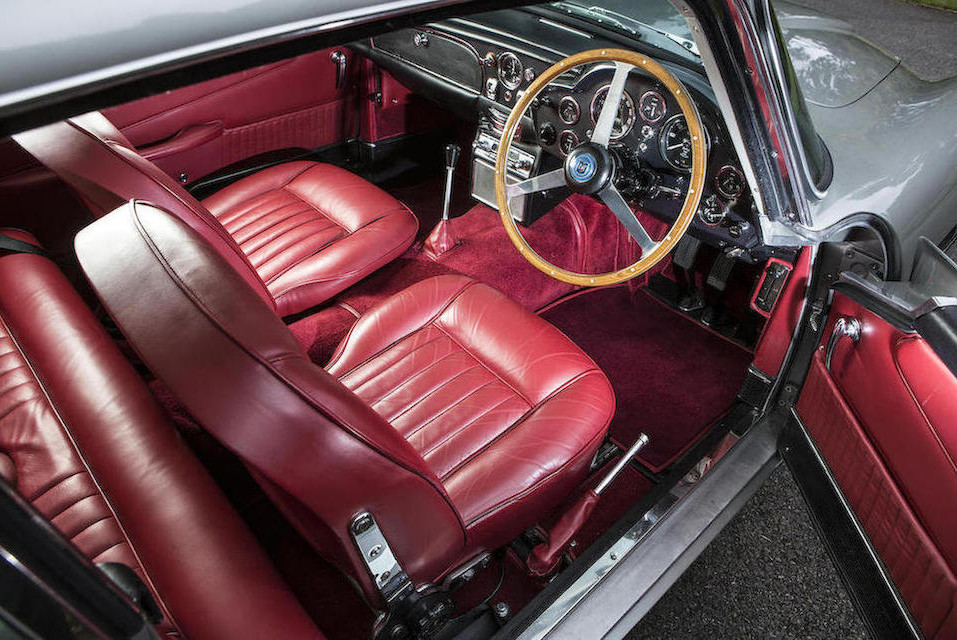 No little red button in the gear lever knob nor ejector seat, but a beautiful classic Aston Martin interior.

The association between Aston Martin and James Bond has become the hallmark example of product placement in the history of marketing. The actual car in the movie had quite a long list of “special” features. You can find a complete list on the “astonmartins.com” website which is an excellent resource for anyone interested in Aston Martins, model variations and history. To see their page on the Goldfinger DB5’s click here. 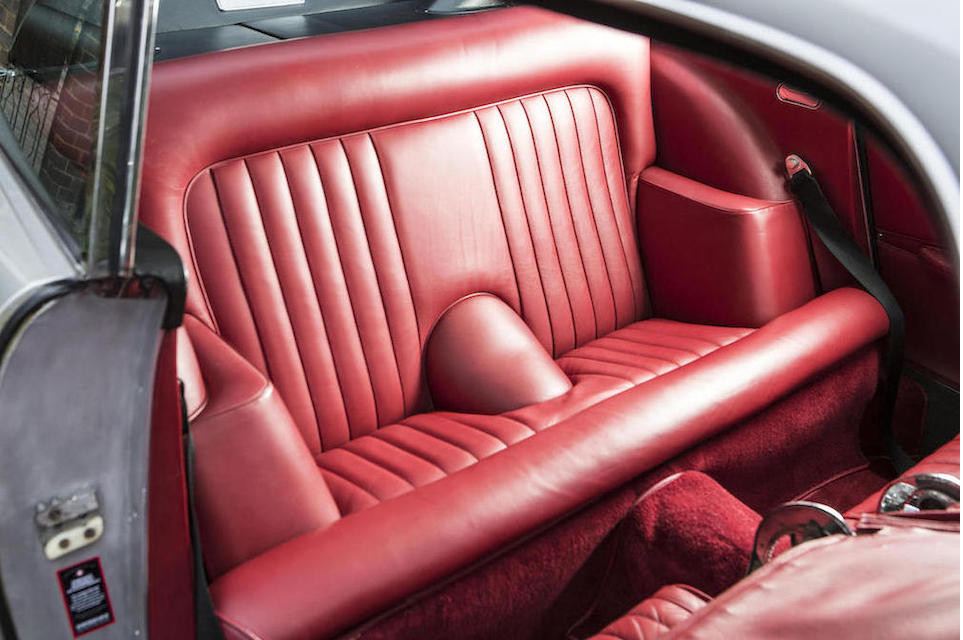 Interior of the sale car has a slight patina of gentle use. The rear seats of a DB5 are quite comfortable though perhaps only for shorter road trips.

Fantastic though it was for Aston Martin’s DB5 to become “the most famous car in the world” it has meant that the other fabulous Astons have been somewhat overshadowed by it. A DB6 for example is a better car and was without doubt a significant improvement over its famous sibling, but it just doesn’t have the same “coolness” factor. However, given the choice between a DB5 or DB6 to own and drive I’d pick the DB6 without needing to toss a coin. But any of these Astons from the DB4 Series I though to the last model of the DB6 are just wonderful cars. I think the DB4 is the prettiest and most desirable, and the DB6 the most practical. 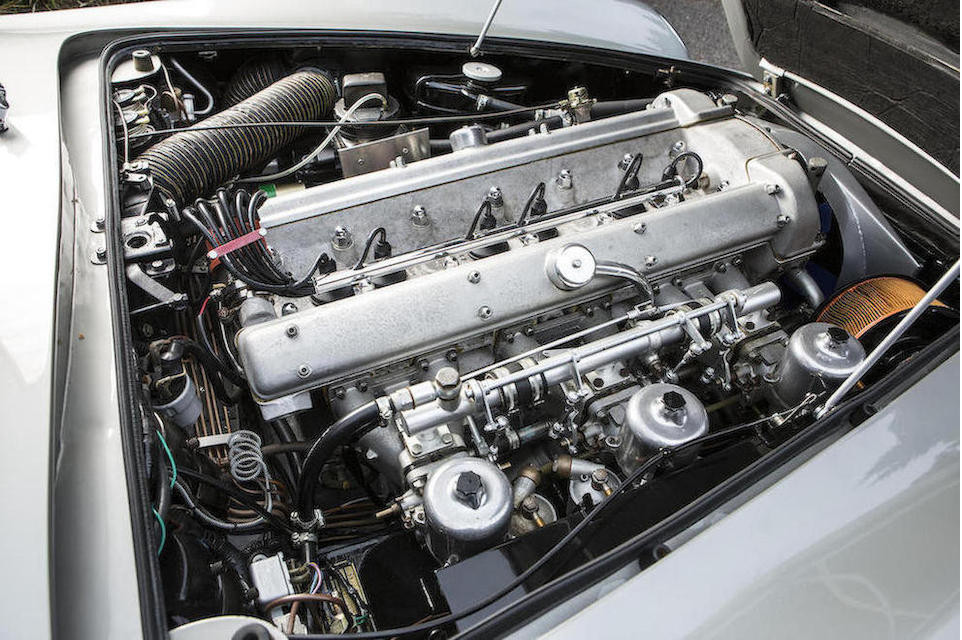 The Aston Martin DB5 began life in 1963 as an “evolution” of it’s predecessor the DB4. You can see our previous post on a DB4 if you click here.

The DB5 used the same new Tadek Marek all alloy in-line 6 cylinder DOHC engine but with an increased capacity of 3,995 cc. The engine breathed through triple SU carburettors and produced a healthy 282bhp with 288lb/ft of torque. By the time the DB5 went into production the early teething troubles of the Tadek Marek engine had been well and truly sorted out and the engine was very much living up to expectations of it. Early production DB5’s were fitted with David Brown’s four speed all synchromesh gearbox with overdrive but this was soon replaced with the superior 5 speed ZF gearbox. A Borg Warner automatic transmission was available as a no cost option. Personally I find it hard to imagine why someone would purchase a car such as an Aston Martin DB5 and not want to have a manual gearbox so they could really enjoy the driving experience; but then I guess I’m a die hard traditionalist for whom there are some things that “just aren’t done”, such as having an automatic transmission in a sports car.

Suspension remained the same as on the DB4 with double wishbones and coil springs at the front and a live axle with Watts linkage and coil springs at the rear. The De Dion semi-independent suspension that had been planned did not make it into the DB5 despite its being used in the Aston Martin Lagonda Rapide which was based on the DB4 and DB5. To see our previous post on the Lagonda Rapide of the early sixties click here.

Interior was leather, of course. The DB5 was without doubt serious competition for the likes of Ferrari and, particularly with regard to interior finish and quality, arguably better. 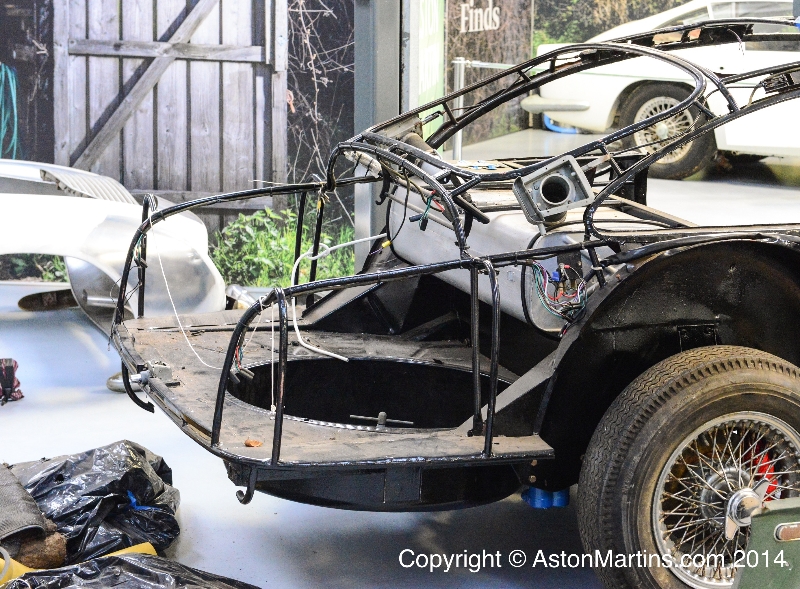 The DB5 had a number of extra “luxury” features by comparison to the DB4 including electric windows and an alternator to provide the additional electrical power needed, especially if air-conditioning was to be fitted. These additional comfort features all added to the weight of the car however so the additional power from the upgraded engine was needed to maintain the car’s performance over the DB4. 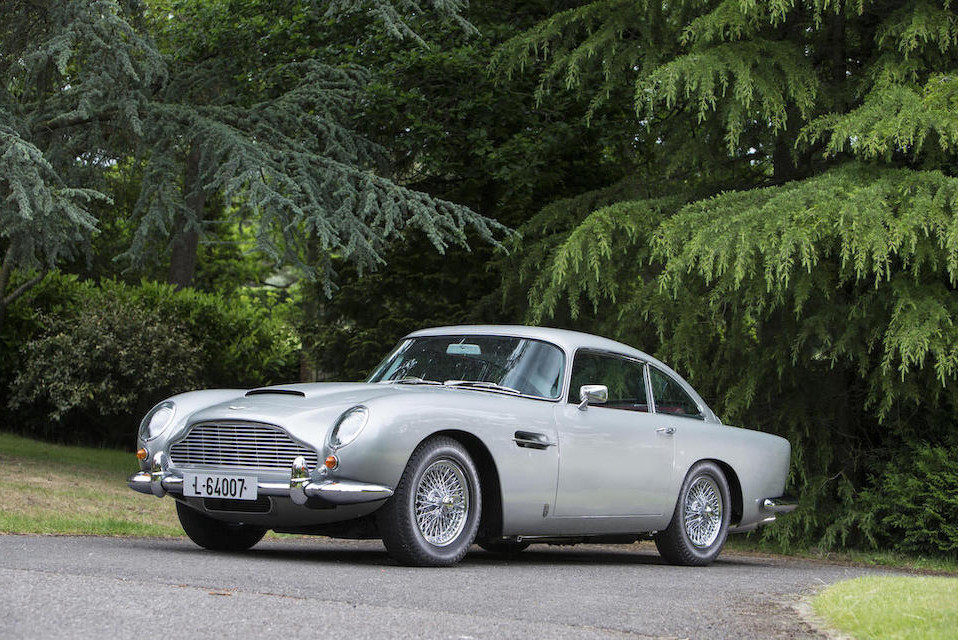 The car we are featuring that is coming up for sale at the Goodwood Festival of Speed on 26th June has been completely restored. It last appeared at auction in 2010 and has been in the hands of a collector in Norway. It has only covered 68,000 miles from new and only 1000 miles since its restoration. So its a beautiful example of a DB5 and it comes with a custom fitted cover so it can be kept protected and preserved.

Also coming up for sale on 24th June 2015 are some other James Bond “Goldfinger” related collectible memorabilia including a movie poster. 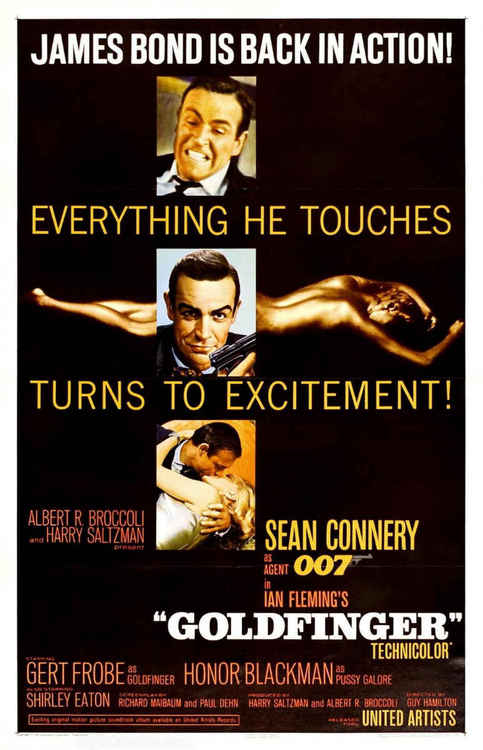 There is also a copy of the script for Goldfinger complete with “dope sheets” coming up for sale. 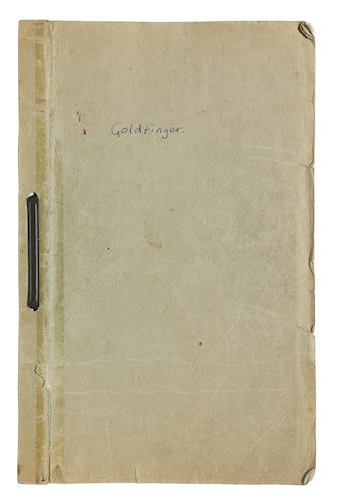 And for those of us who don’t have a spare half million pounds burning a hole in our pocket and for those who do, here is a documentary about the making of Goldfinger; the movie that turned the Aston Martin DB5 into a Midas “touch of gold” for Aston Martin.

You can get the movie on Amazon if you click here.

There are also some nice books on the DB4/5/6 if you click here.