Back when I was heading overseas and had to lose most of my shooting library there was one book I was determined to keep, and that was “Brother to the Dingo” by Murray Mitchell. So I have it with me to this day and although it has been read through more than once and loaned to others a few times,  and in between kept safe on a bookshelf, it nonetheless has the yellowing that comes from age, especially age in the sub-tropics. Heat and humidity are unkind to books just as they can be unkind to people.

What was it about Murray Mitchell’s little book that made me determined to hang on to my signed copy? The book is autobiographical and Murray Mitchell describes himself in self deprecating style on the back cover of Brother to the Dingo as follows:-

“It is usual to support books with a potted history of the author and to include copies of fulsome praise by selected critics. We can deal with this fairly easily. The author has been an unsuccessful student, soldier, professional fisherman, and civil servant. He has been a son, husband, and father by natural progression and having survived these can take no credit for being a hunter of any sort.

As for books; this is the first. Which is ideal because critics will be late to the table and with some luck we shall have sold a few before those quaint carnivores who decry hunting in between visits to butcher’s shops can bestir themselves into calumny. This book is about places, people, animals, lots of life and a little death. Selected yarns from a drifter of no great talent, except for an immense love of lonely places and respect for animals.”

Thus there is no fanfare and no expectation of something of world shattering importance. It is a book of ordinary stories from an ordinary man who has had the opportunity to live through some fascinating events and emerged with some stories to tell. Stories that are worth the telling, and stories that are worth listening to. One story is called “If I had a Hammer” and it was one of the main reasons I kept the book and took it with me. 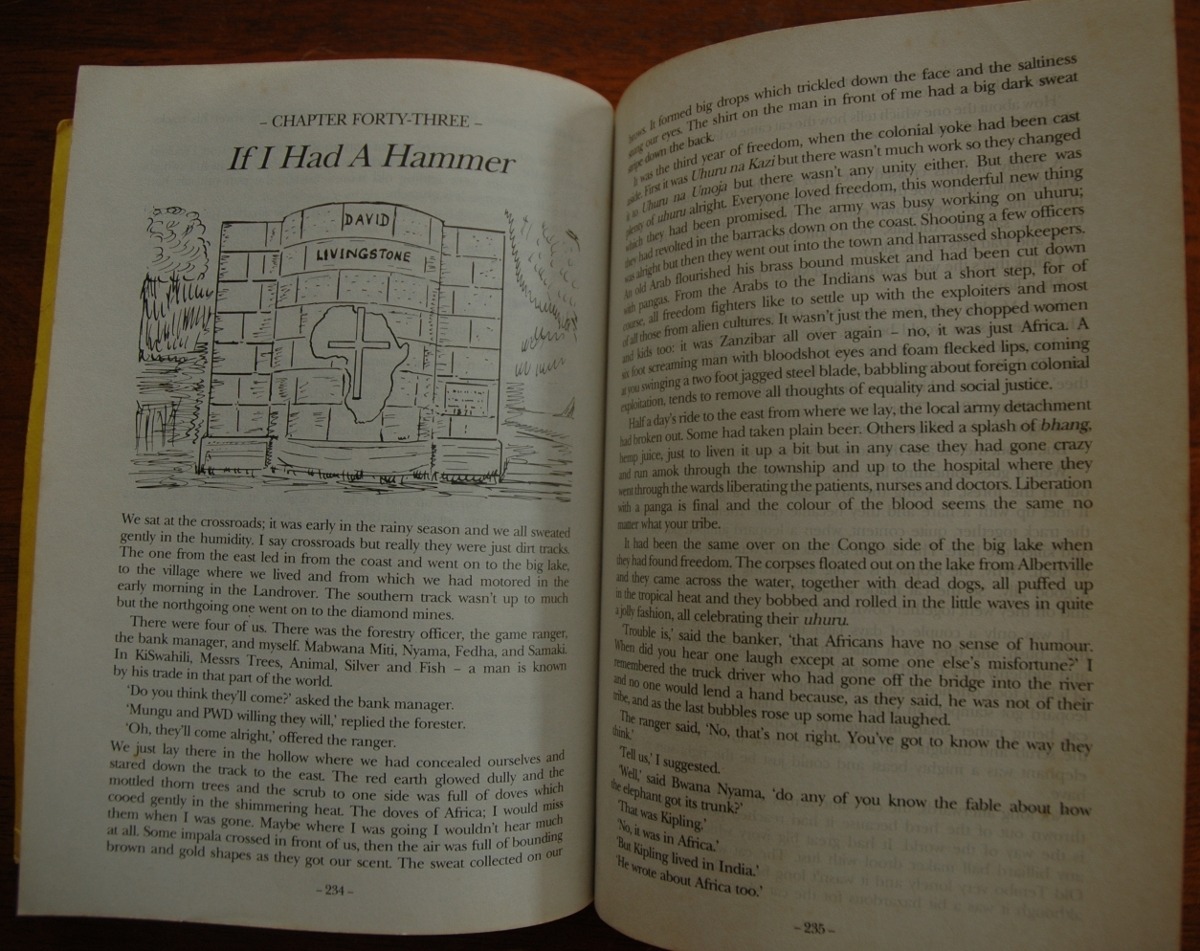 Sometimes in life I’ve been allowed to teach history, or Social Studies as it has become in schools in recent decades. So, whilst the school textbooks will almost invariably present a view of Britain’s colonial past in a wholly negative light I found it useful to allow students first to become absorbed in the version of history that the textbook pushed onto them. Then, once they were convinced that was the only right view I would read “If I had a Hammer” to them and play the Peter, Paul and Mary song of the same name at the end. Suffice to say that class discussions became rather more animated and the young people were able to see that there is not just one “correct” way to see history, and also to appreciate the power of group-think. As Mark Twain remarked “Whenever you find yourself on the side of the majority, it is time to pause and reflect”.

We now live in a world where people are told what to believe and so many seem willing to adopt “Political Correctness” as something we all must do and even believe in. Few seem interested in the effort required for critical thinking nor do there seem to be many with the courage to ridicule the ridiculous. Political Correctness dictates that we mustn’t offend any body. I wonder what Winston Churchill would have said concerning all this. Churchill once said in reference to Hitler “If a mad dog makes a dash for my trousers I shoot him down before he can bite.” We are not told if Hitler was offended.

If you, like me, are someone who loves life, people, and wild remote places then Murray Mitchell’s “Brother to the Dingo” may be a book you will enjoy. It’s a bittersweet book filled with imagery of a world that is now all but gone. Finding a copy might be a challenge. But the best things in life are usually the things that require effort and patience.