This is a high resolution image of the right side of this 1866 Winchester rifle. The rifle is in .44 Rimfire/.44 Henry caliber.

This is a rifle that has been in the hands of the family who inherited it for 128 years. It has not been documented or published before so this is very much a new find, and as it wasn’t found in a barn we won’t call it a “barn find”. It has been preserved and cared for and has now come to light as it is to be sold at auction by Rock Island Auction Company at their next auction to be held on 9th-11th September 2016.

Below is a video by Rock Island Auction about this rifle.

Made in 1870 this rifle was created for a man named Ira Paine, sometimes better known as Chevalier Ira Paine as he was knighted in Portugal during his exhibition tour of Europe. Ira Paine is sometimes also referred to as the “Master Shot of the World”.

Left side view of the solid silver receiver of Ira Paine’s 1866 Winchester.

Ira Paine was born at Hebronville, Massachusetts, on 11th February 1837, his father’s name was Ira and his mother’s Elizabeth. Hebronville was located in Rhode Island and at the end of his life Ira Paine would ask that his body be embalmed and returned to be buried there. From the few accounts we have of his early life young Ira might have had something of a “Tom Sawyer” childhood and he trained to become a plumber and gas fitter. A respectable and profitable trade that he is said to have excelled at. Back in the pre Civil War days a college education was not necessarily an available thing but to acquire a respectable trade that was profitable was a wise choice, and I suspect still is. 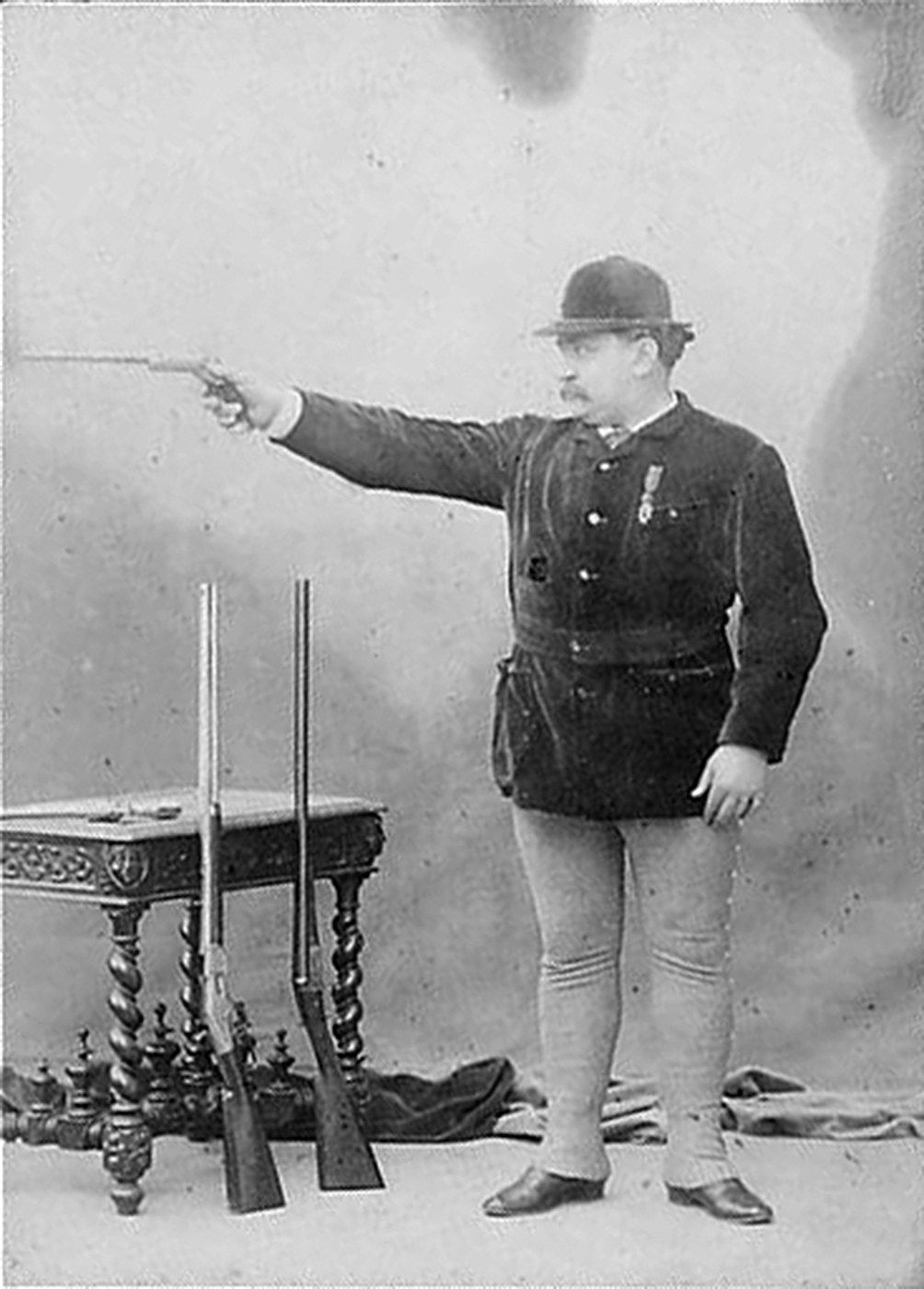 Ira Paine in his standard performing outfit. The medal he wears on his jacket is his knighthood presented to him by the King of Portugal in Lisbon. The Winchester 1866 seen standing against the table next to a European shotgun is the 1866 Winchester that is up for auction.

In these formative days of his life Ira Paine joined a quartet and soon developed a reputation as an excellent soloist. This tends to tell us that he was someone who enjoyed being in the public eye and performing. As his social status grew he joined the local yacht club and began to be more interested in guns than yachts. He became a member of the yacht club pigeon shooting team, this being the days of live pigeon shooting, and soon developed a reputation as a top shot with a shotgun.

Top view of Ira Paine’s 1866 Winchester. As can be seen from the differences in the color of the metal the receiver is silver and the steel barrel is nickel plated.

Ira Paine sought to extend his skill set by developing his marksmanship with the rifle and then the pistol and revolver. A handgun is a far more unforgiving firearm to master than a long arm but Ira Paine soon became renowned as a crack shot with a handgun and as a man who could shoot a handgun with either hand equally well.

Ira Paine married on 21st August 1856 with a lady named Margaret E. McLaughlin and they had their first and only child, a daughter they named Marietta about a year after their marriage.

Ira and Margaret decided to work together as a shooting stage act and began what was to become a highly successful career together. 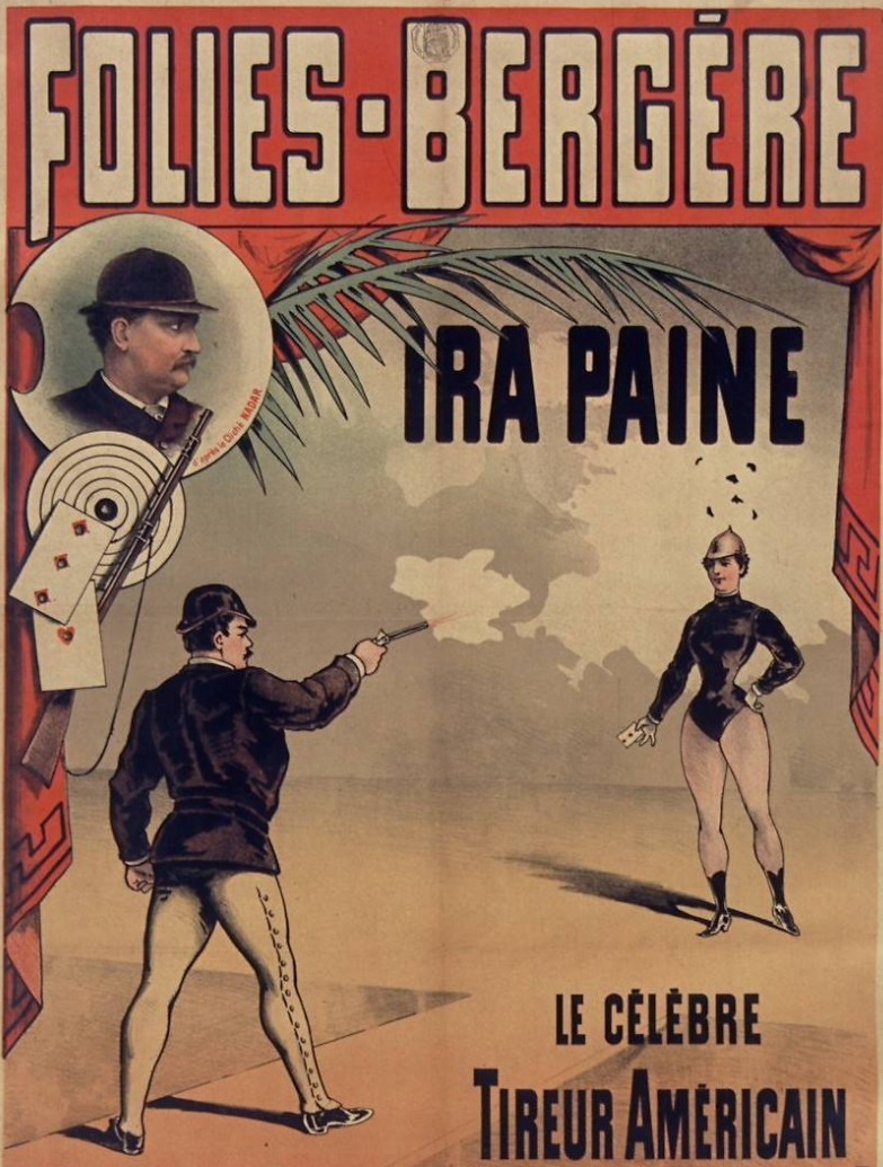 In their stage act Ira would shoot glass balls filled with feathers from a helmet on his assistant’s head. Although Ira Paine’s first wife Margaret was his original assistant this picture is from Ira’s season at the Folies Bergere in the late 1880’s and his assistant is his third wife Anna. (Picture courtesy muzeo.com).

Ira and Margaret developed a stage act which involved Margaret wearing a specially designed helmet on top of which could be placed a glass ball filled with feathers. Ira would then shoot the glass ball from her head causing it to explode in a shower of feathers, audiences loved it. Margaret would also hold a playing card edge on to Ira who would split it through with a bullet. Ira Paine designed a number of props for his and Margaret’s stage shows including a “trap” type target launcher. 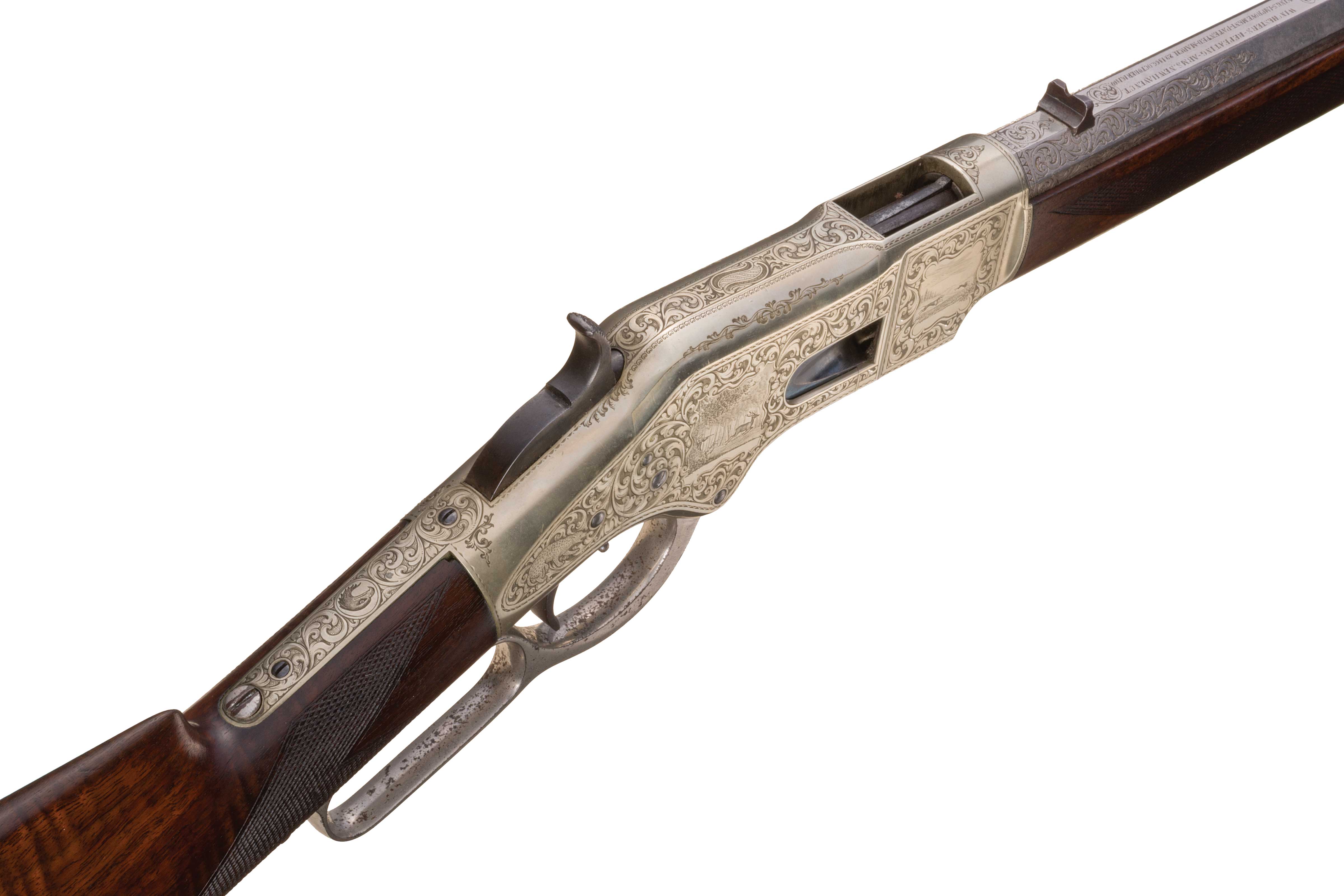 In this upper right side shot of Ira Paine’s rifle we can assess just how good the condition of this rifle is.

Ira and Margaret started taking their show from town to town in 1860 and the Nation Rifle Associations “Arms and the Man” magazine describes the show as follows:-

“During his first tours of this country he used a Stevens pistol exclusively. Some of his favorite shots at that time included breaking a small glass ball at 12 yards; shooting glass balls the size of a walnut from the top of a helmet worn by his wife while she walked about the stage; smashing swinging balls; shooting the “spots” from playing cards held by his wife, and then splitting the card, when held edgewise by a single accurate line shot.”

Although Ira favored the Stevens Lord pistol for his marksmanship he was also a showman and the small caliber Stevens pistol was not as spectacular as it needed to be.  Ira established contact with gunsmith Gastinne Renette of Paris to find a suitable handgun. A dueling pistol from Renette did not prove to be satisfactory so the two cooperated testing other handguns eventually settling on the Smith & Wesson No. 3 revolver in .44 Russian. This larger bore black powder revolver was rather more spectacular although we wonder how Margaret felt about having .44 caliber lumps of lead flying at the little glass feather ball on her helmet.

That Smith & Wesson No. 3 that Ira Paine used still exists and is in the hands of a private collector. You can see it in action in the video below.

In 1866 Ira and Margaret traveled to Europe and performed shows extensively across the continent. It was as a result of one of those shows, a private show performed by appointment for the King of Portugal, that Ira was knighted by the King becoming Chevalier Ira Paine. This happened on 8th December 1882. Ira was a man who was not frightened of having his skills put to the test. He happily went into competition with noted marksmen in Europe the most famous being his contest with Europe’s most respected pistol shot Joseph Schulhoff of Vienna on 28th September 1885. The targets for this pistol contest were placed at 40 yards, 120 yards and 325 yards. The 325 yard target measuring 18″x36″. Ira Paine managed to shoot a aggregate score that was almost double that of Joseph Schulhoff and was presented with a gold medal with the inscription “The Master Shot of the World; from Vienna Friends.”

Ira Paine’s personal life is unclear in the intervening years. His marriage to Margaret ended but the circumstances are unknown and he married again, a marriage that also seems to have ended, and then whilst in Europe married a third time to Miss Anna Marchant who became his assistant wearing the helmet that carried the little glass feather ball targets.

In 1886 Ira made a brief return trip to the US and performed a number of shows. He joined with Robbins Circus and toured with them becoming friends with the circus manager William P. Loper. However, the Circus owner Frank A. Robbins decided to do “a midnight flit” taking all the takings and heading off for parts unknown. William Loper kept the circus going and managed to pay the staff. The silver 1866 Winchester rifle that belonged to Ira Paine he gave as a gift to William Loper prior to returning to Europe where he was now exceedingly famous, whereas in the US by this time there were many crack shots plying their trade. So he returned to Europe and continued touring there.

Towards the unexpected end of Ira’s life he and Anna were working at the renowned Folies Bergere in Paris when he was suddenly taken ill on the 8th September 1889 and died forty two hours later on 10th September 1889. 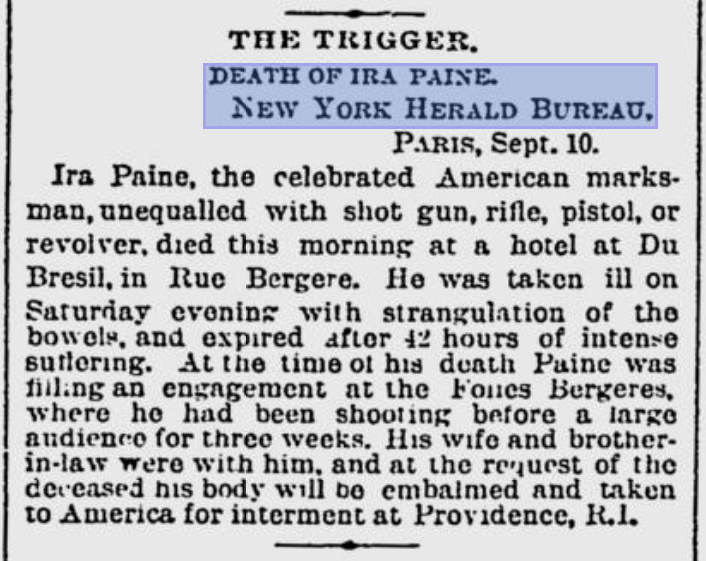 The Winchester 1866 rifle was passed on by William Loper to his grandson Belmont L. Worman and it remained in his family being passed down through the generations until the present time. The condition of the rifle can be seen in the high resolution pictures provided by Rock Island Auction. The rifle also has some interesting manufacturer’s marks underneath the stock and hidden inside the action that will take some Sherlock Holmes work to decipher.

The Winchester has some intriguing marks inside the action and under the stock.

This rifle is a fascinating collector’s piece that presents a number of challenges to establish its history and the events and stories surrounding its two owners, Ira Paine “The Master Shot of the World” and the man he gifted it to, William Loper. This is a rifle with some stories to tell, and the stories are waiting to be discovered. 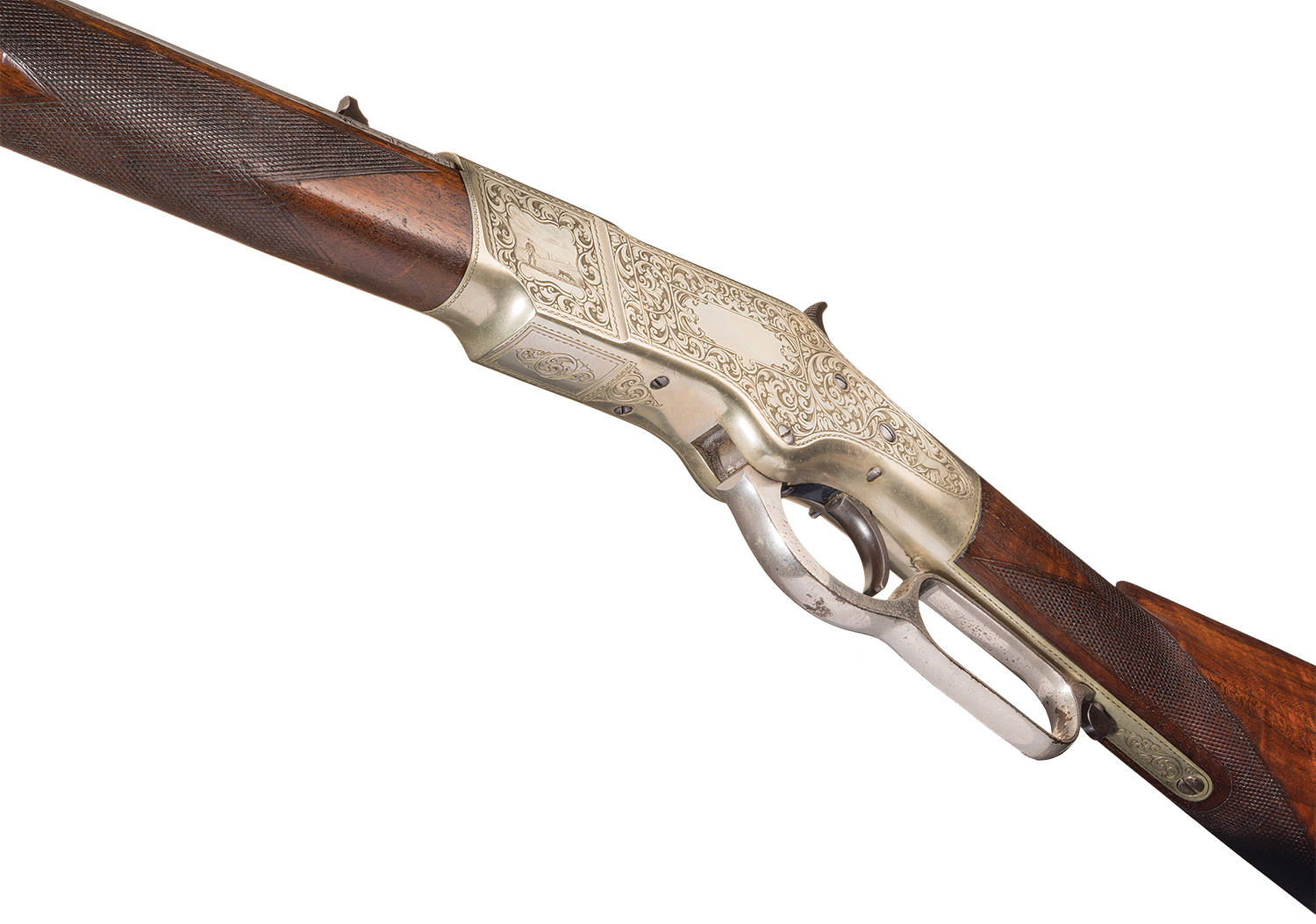 (All pictures courtesy Rock Island Auction except where marked otherwise).