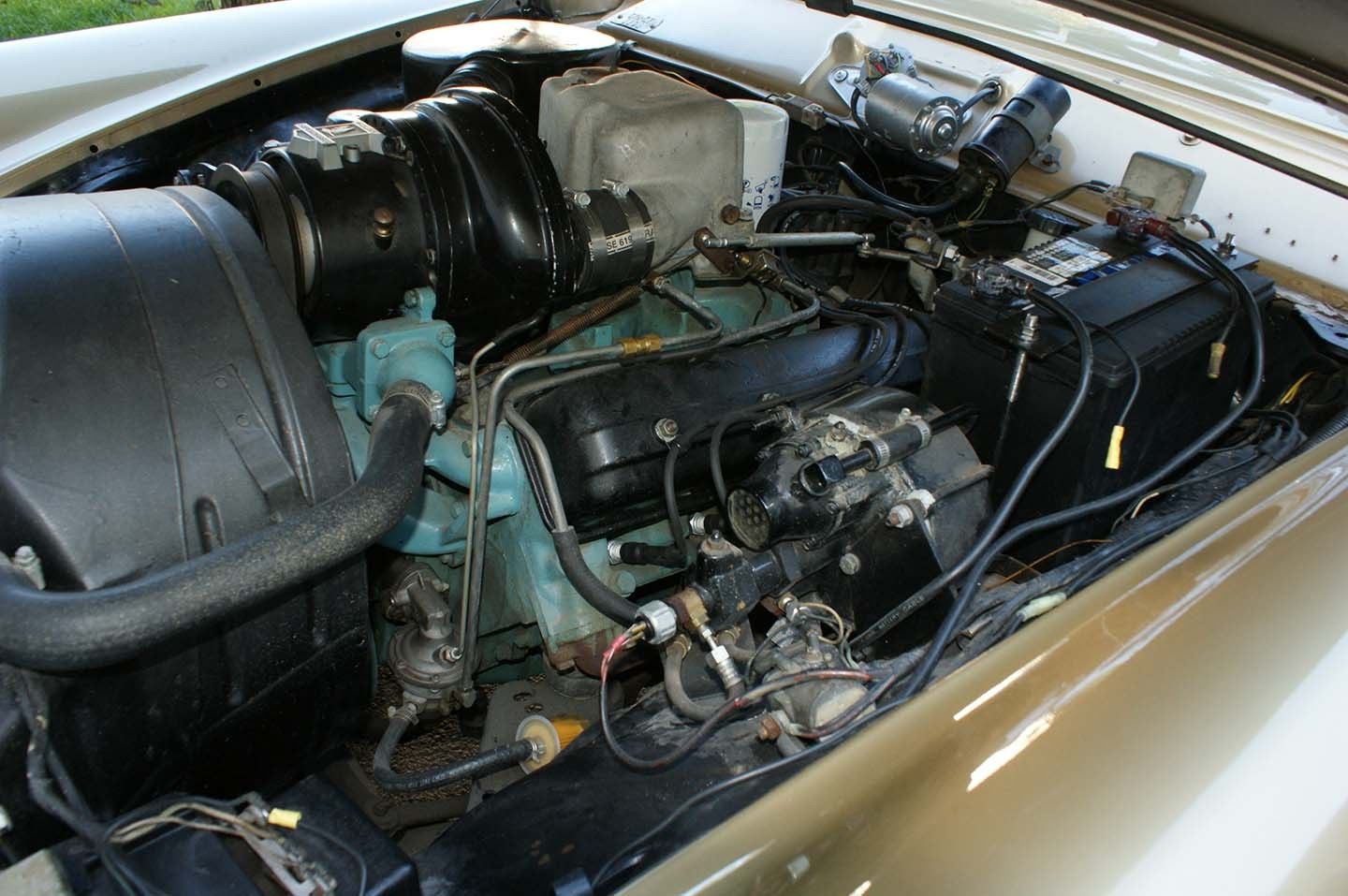 When Studebaker lost the ability to manufacture the 5.8 liter Packard V8 for the 1957 model year they were forced to switch to their own Studebaker 289 cu. in. (4.7 liter) V8 but added a McCulloch supercharger to it to ensure the same power output as the larger Packard engine.

For the 1957 model year because the McCulloch supercharged Studebaker engine was higher it required a raised fiberglass section on the hood to clear it. The car’s styling was made more striking with rear fins being made rather more flamboyant and made of steel. With its two tone paint work emphasizing the larger tail fins this was an impressive looking machine for 1957-1958 and an impressive performing one. 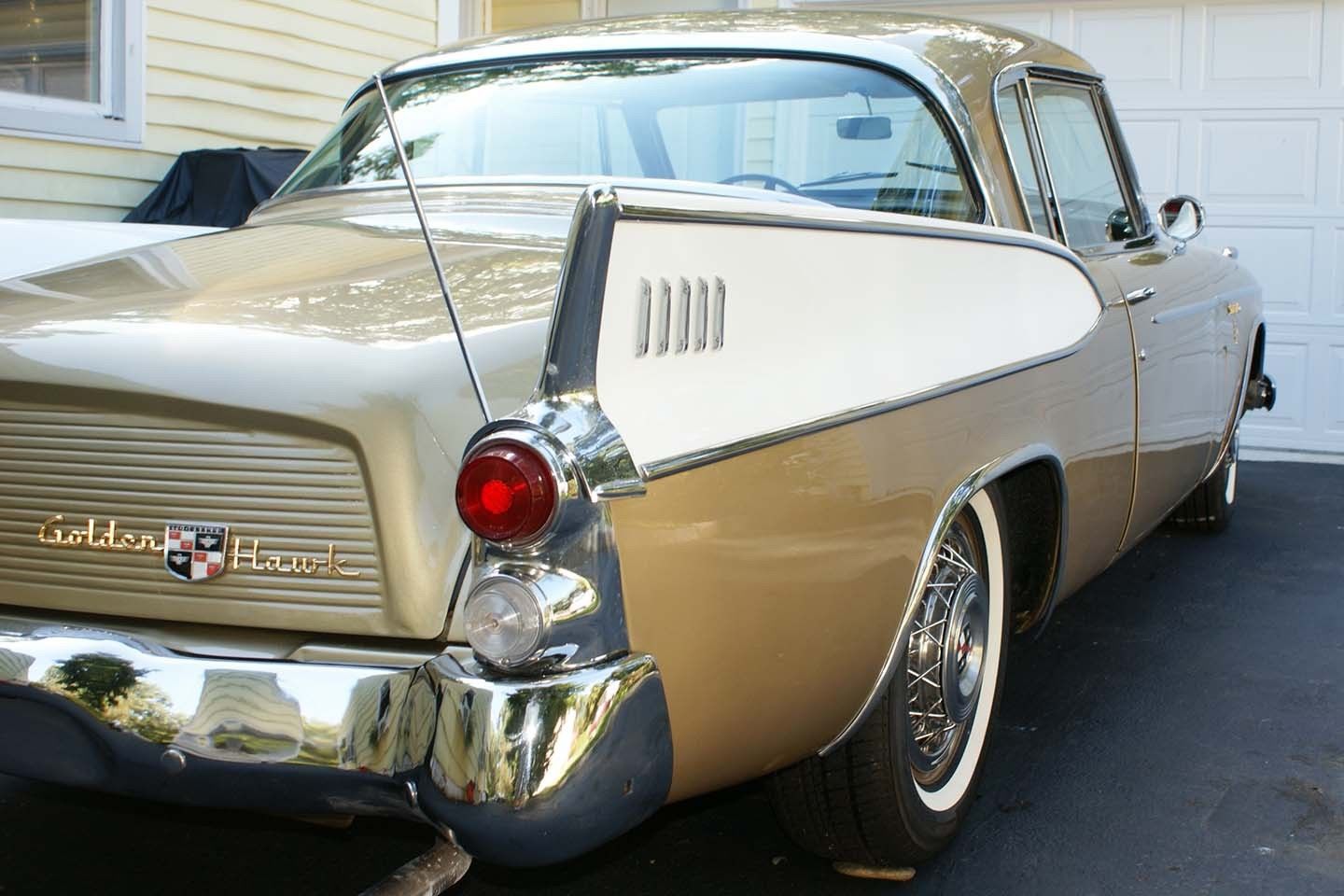 The rear fins are one of the defining features of this Raymond Loewy design. The wire wheel hubcaps were a desirable optional extra.

1957-1958 Golden Hawks were typically made with two tone paint jobs most commonly with a contrasting color on the fins. The dashboard was padded with a “jeweled” or engine turned aluminum dashboard instrument panel. 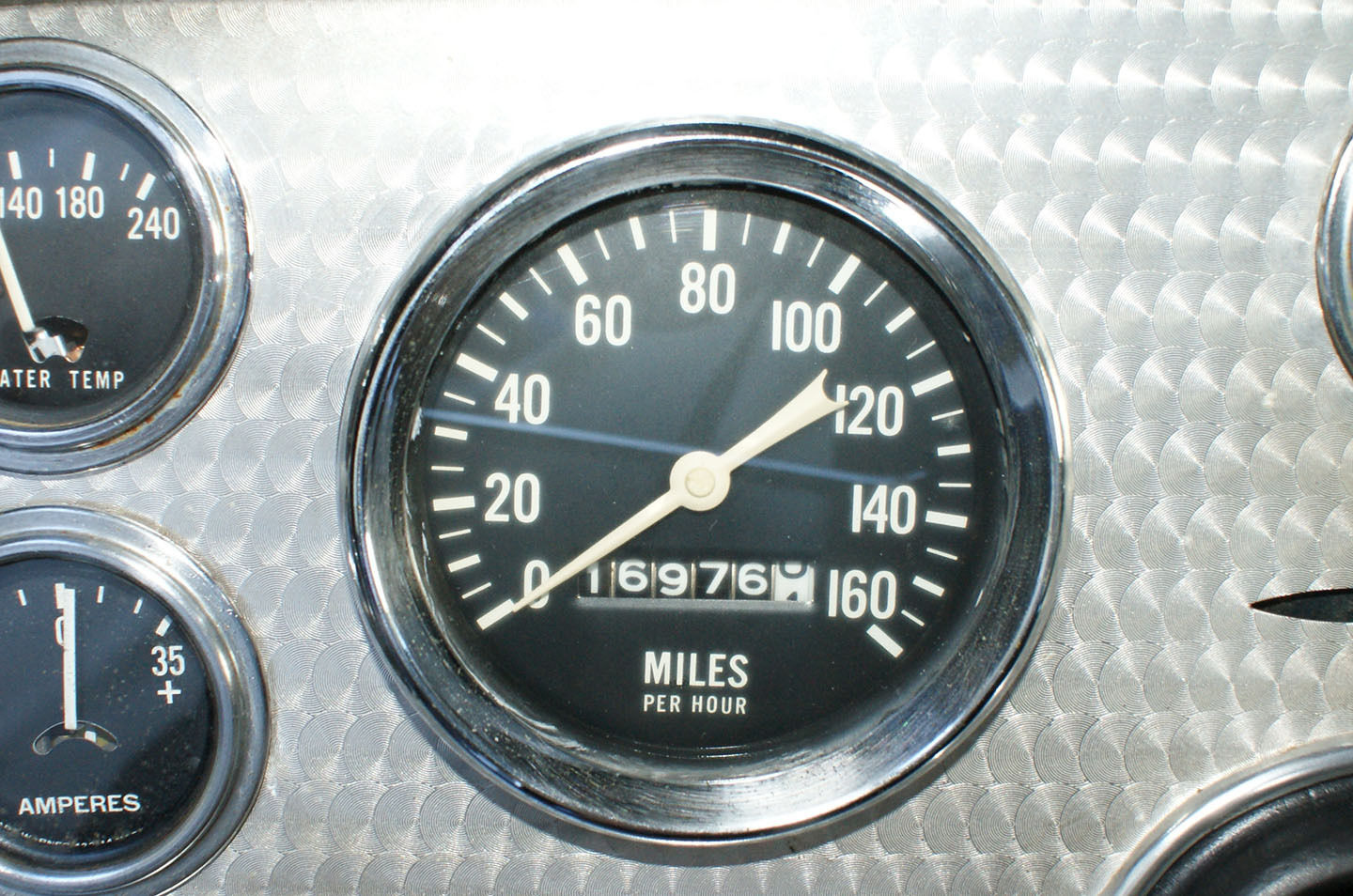 How close to 160mph will it go? The instrument panel was “jeweled” aluminum and this finish extended all the way to include the glove compartment.

Despite being a bit front heavy the Studebaker Golden Hawk seems to have handled well and rarely received negative comments on this from professional testers many of whom were racing drivers. Its a car that responds well to balancing acceleration through corners which tends to transfer weight to the rear and make the car squat down nicely. 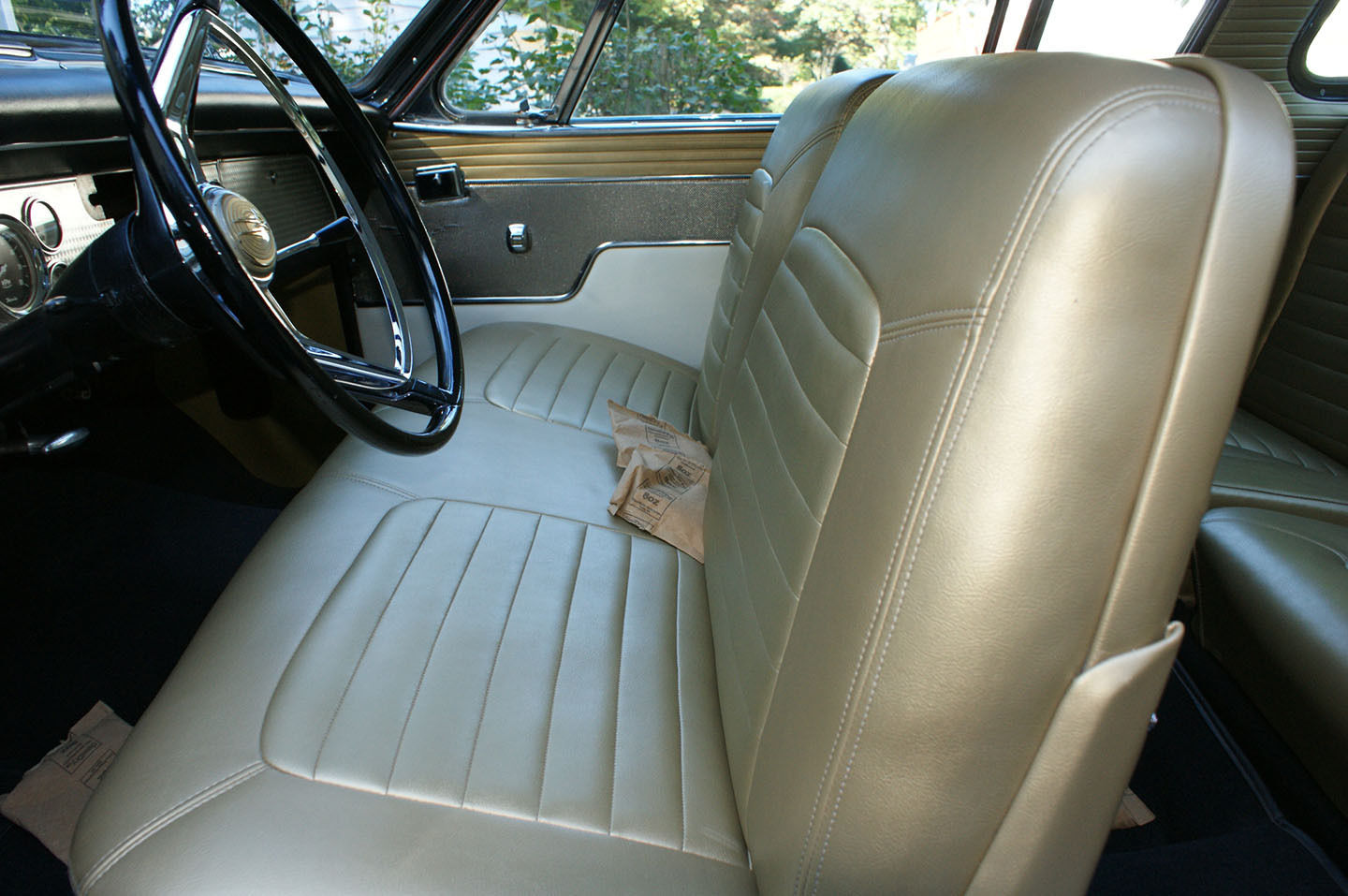 Interior of this 1957 Golden Hawk appears to be in nice original condition.

The gold 1957 Studebaker Golden Hawk in our photos is currently for sale on eBay and is located in the north eastern United States although the eBay page suggests international shipping is an option for overseas collectors. The car is being sold from a deceased estate so some information is not available, but the photos speak for themselves.

Trim appears to be in nice shape.

This is very much a collectors car yet it is a collectors car that, once it has had some re-commissioning work done, should make a fabulous driving collectible. That supercharged V8 delivers sub eight second standing to sixty times and this car was made to be an outstanding highway cruiser.

You will find the eBay sale page with more information if you click here. 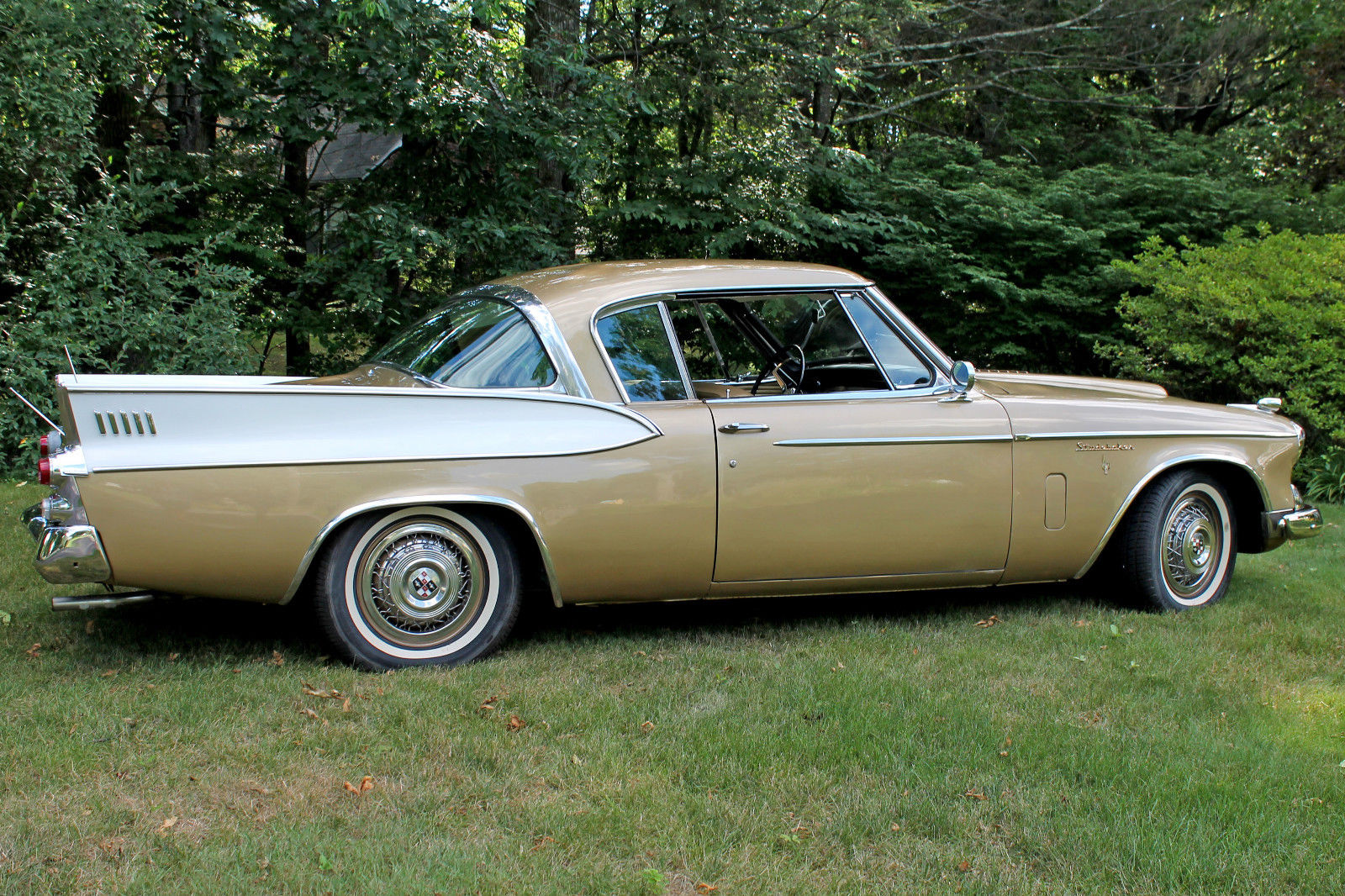 Studebaker’s Golden Hawk stands out as one of the best looking American cars of the fifties.

You will also find this car listed on Barnfinds if you click here. 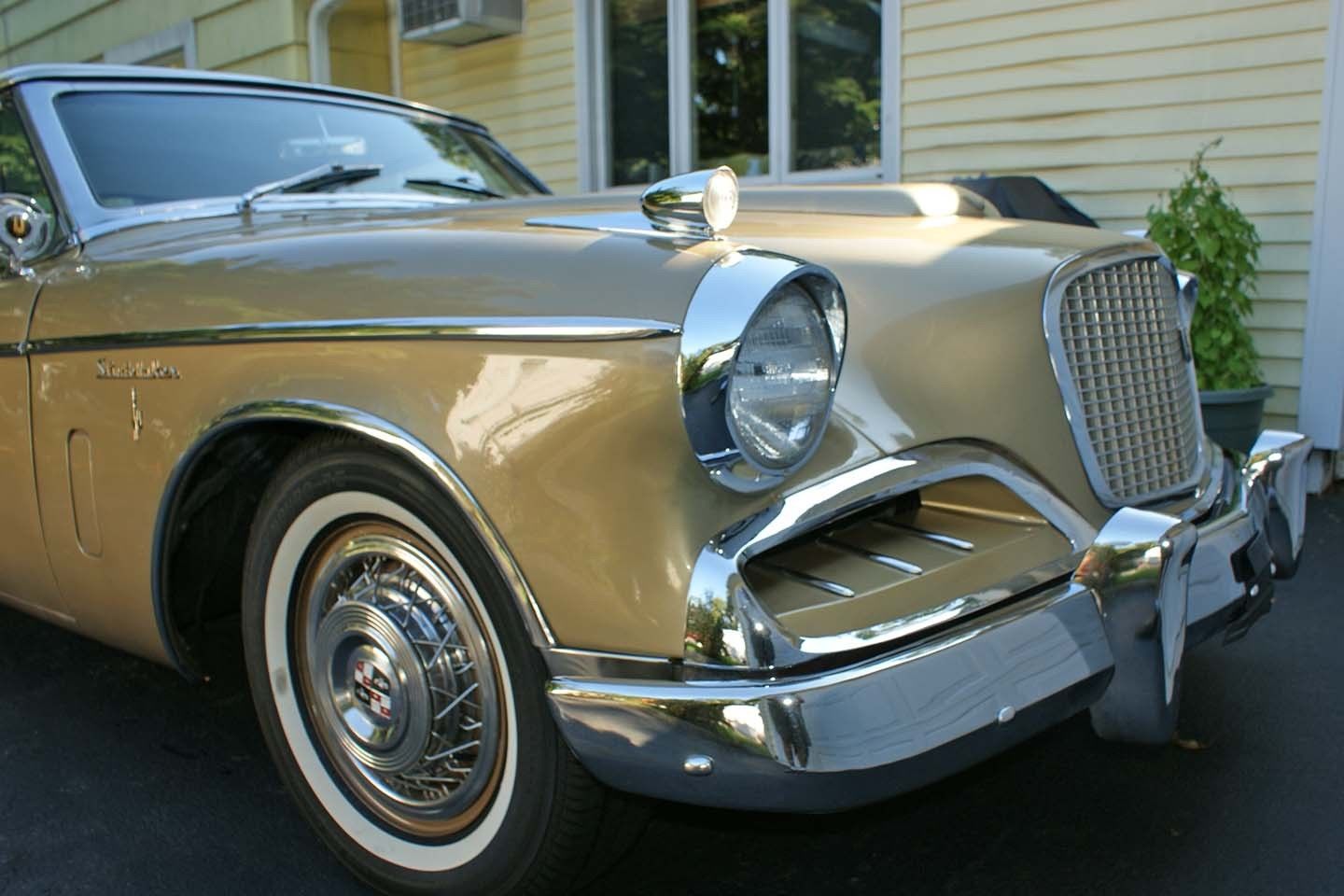 The styling of this car is very striking.