The Bugatti Type 51 and its variants the Type 54 and 59 were the final refinement, and the end of the line for the iconic Bugatti competition cars. Before Adolf Hitler set about the business of world domination he set about the business of dominating the world of motor sport seeing it as a way to establish Germany’s “street cred” as it were. If someone decides to put the resources of a nation state into winning Grand Prix races then they are likely to experience a lot of success and that was indeed the case for the “Silver Arrows” of Mercedes-Benz and the Ferdinand Porsche designed mid-engined Auto Unions. But it was something that was to change the face of motor sport in the thirties and the ordinary businesses such as Bugatti who had been mainstays of the sport found themselves marginalized as Hitler just threw money at his manufacturer teams to ensure they could not lose. 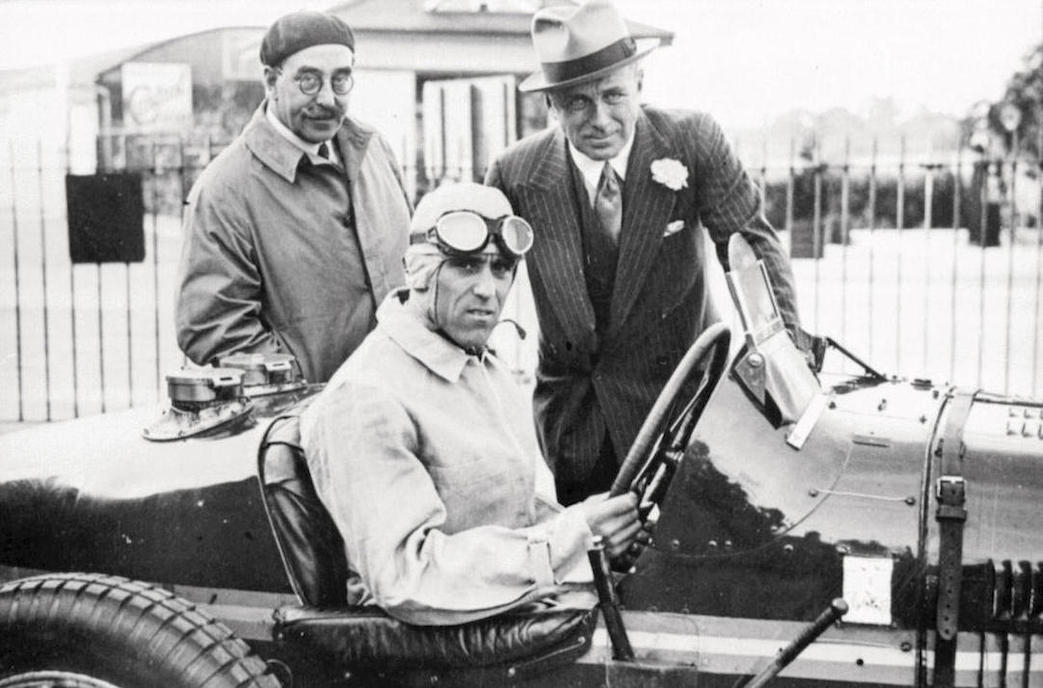 Prior to the German assault, motor sport had been the province of gentlemen racers and gentlemanly manufacturer’s teams. Here we see Tazio Nuvolari at the wheel of Earl Howe’s Bugatti Type 51 at Brooklands in 1933, the gentleman in the pinstripe suit is Earl Howe, the dashingly eccentric gentleman in the beret is famous Brooklands scrutineer Hugh McConnell.

Up to the advent of the German “Silver Arrows” the world of motor sport had been very much the province of eccentric gentlemen, and larger than life characters such as Tazio Nuvolari of whom Enzo Ferrari once said “Whenever I think of him today, I feel myself smiling. He was so full of life, almost bursting. We were astounded by him as a driver and loved him as a man.” These were the days of the amateur enthusiasts. People who were in motor sport for the sheer love of it. The German teams brought in a new era of professionalism, and a cloak and dagger determination to win that saw their cars kept from the public view and away from the interested eyes of other teams. The only view anyone got of them was once they were on the track. 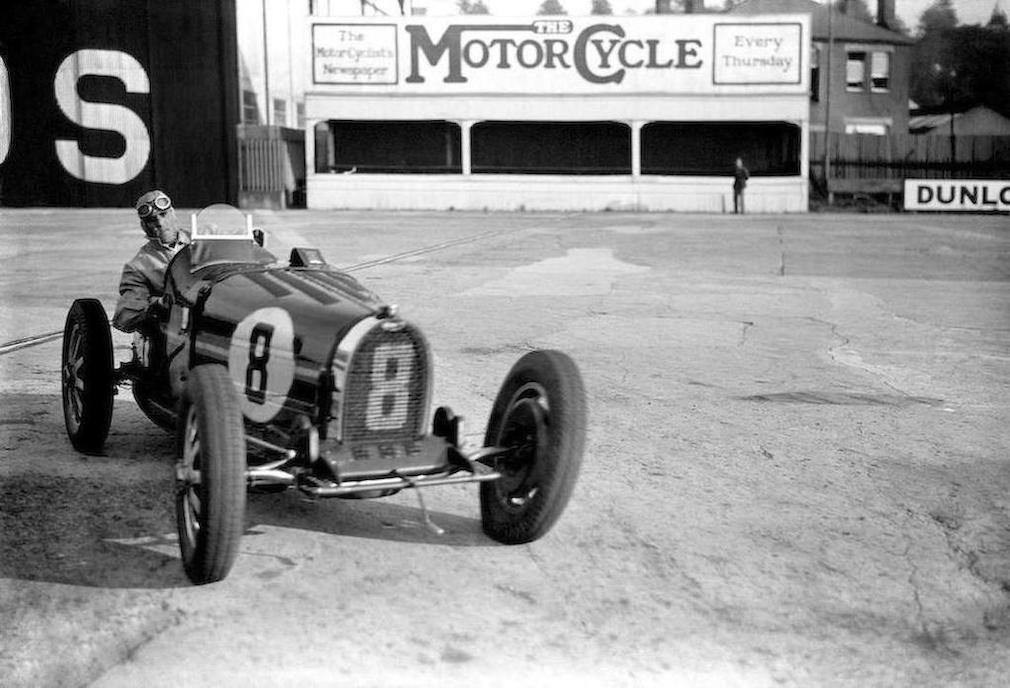 Earl Howe behind the wheel of his Bugatti Type 51. From the looks of the tire deflection he is having an absolutely spiffing time.

Thus it was for the wonderful Bugatti Type 51 that although it was a great successor to the iconic Type 35 it was not a match for the new professional teams and the rapid advances in technology. Yet the car exudes the character of the twenties Bugattis and was certainly loved by those who drove it. And indeed how could one not love it. Sitting underneath that characteristic Bugatti hood sits a straight eight DOHC supercharged engine which looks and sounds so fantastic that it doesn’t matter if it happens to be the fastest car on the block or not. 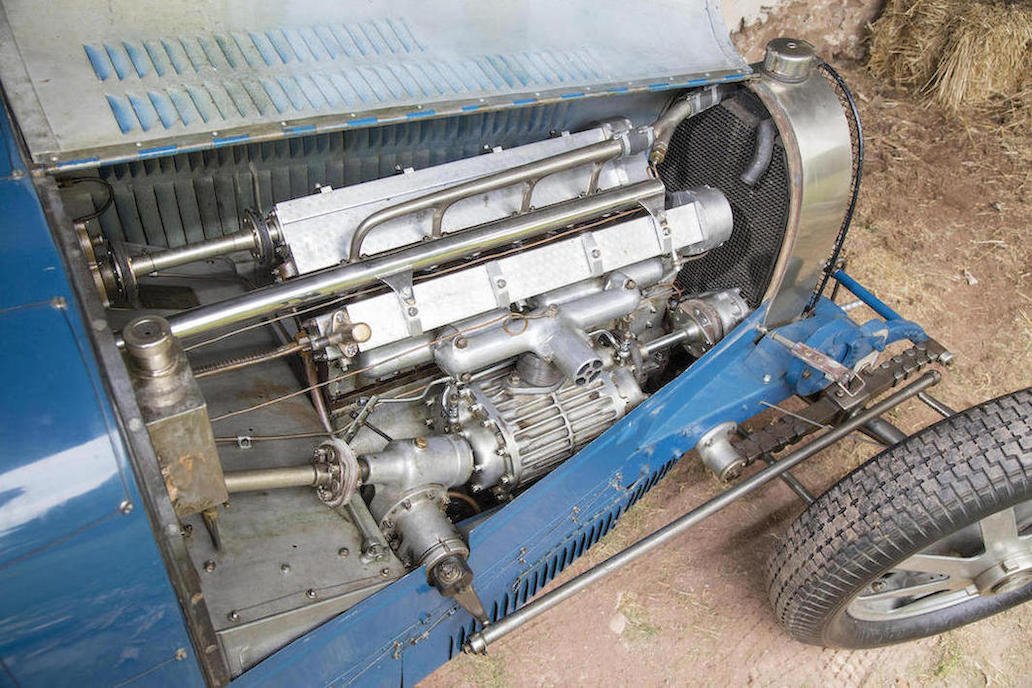 The character of this Bugatti Type 51 is summed up in this picture. The beautiful supercharged straight eight sitting in a car whose suspension and brakes are somewhat reminiscent of a boyhood “billy cart”.

The Bugatti Type 51 retained twenties technology including cable operated drum brakes and leaf spring suspension. The engine however was an example of Bugatti deciding to employ some good old Yankee ingenuity, and 1915 Yankee ingenuity at that. Two of the most famous names in American racing engine design are Fred Offenhauser and Harry Amenius Miller. Miller and Offenhauser developed a 181 cu. in. straight eight engine based on a 1913 Peugeot but with twin overhead camshafts, and it was those twin overhead camshafts that were to prove so successful not only in that engine but also in the later in-line four cylinder racing engines that bore the Offenhauser name. 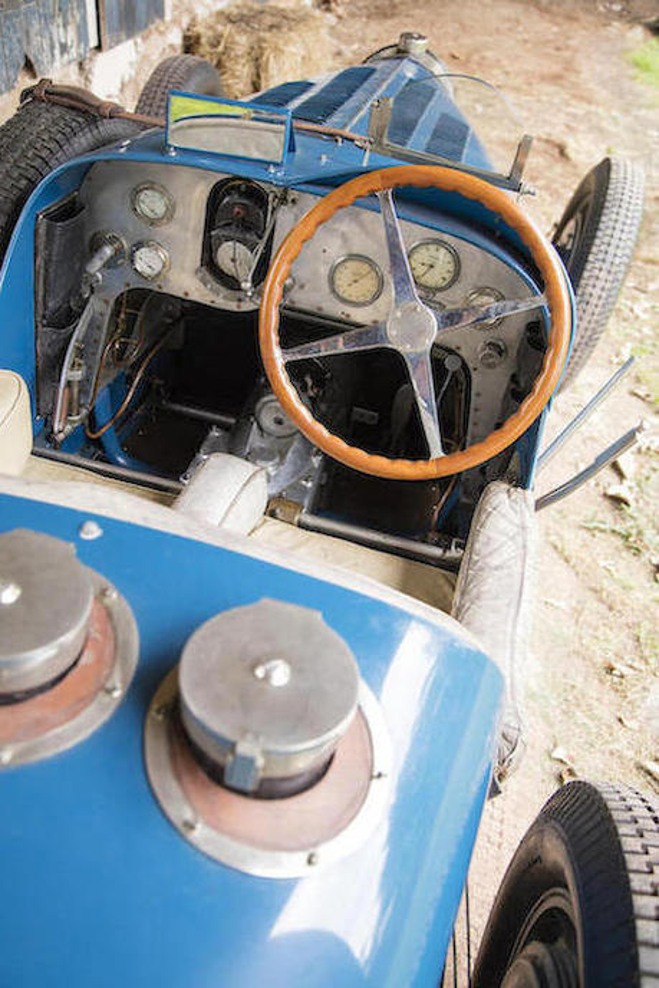 Despite the “billy cart” appearance the seats offer good lateral support for hard cornering and getting fuel into the tank via those two oversize fillers makes it about as quick as it gets.

Miller/Offenhauser cars became the cars to beat in Speedway racing across the United States during the twenties and they adapted easily to the rule change that reduced engine capacity from 121 cu. in. to 91 cu. in. The new “Miller 91” cars were made available in both front wheel drive and rear wheel drive versions and after a successful season sponsored by Packard Cable Company one of the drivers who went by the “race name” of Leon Duray took two Miller 91 front wheel drive cars for a European tour in which he demonstrated the cars abilities. Leon Duray set records at Montlhéry near Paris in France and at the Monza Autodome in Italy. By the time the demonstrations were done however the two Miller 91’s were in a broken condition and Leon Duray found himself “broke” also.

Ettore Bugatti saw how good these Miller 91’s were and also saw an opportunity to acquire the Miller/Offenhauser technology. He offered the broke Leon Duray three nice new Type 43 Bugattis as a swap for his two broken Miller 91’s. The deal was done and the DOHC technology was quickly incorporated into the straight eight of the Bugatti Type 51. 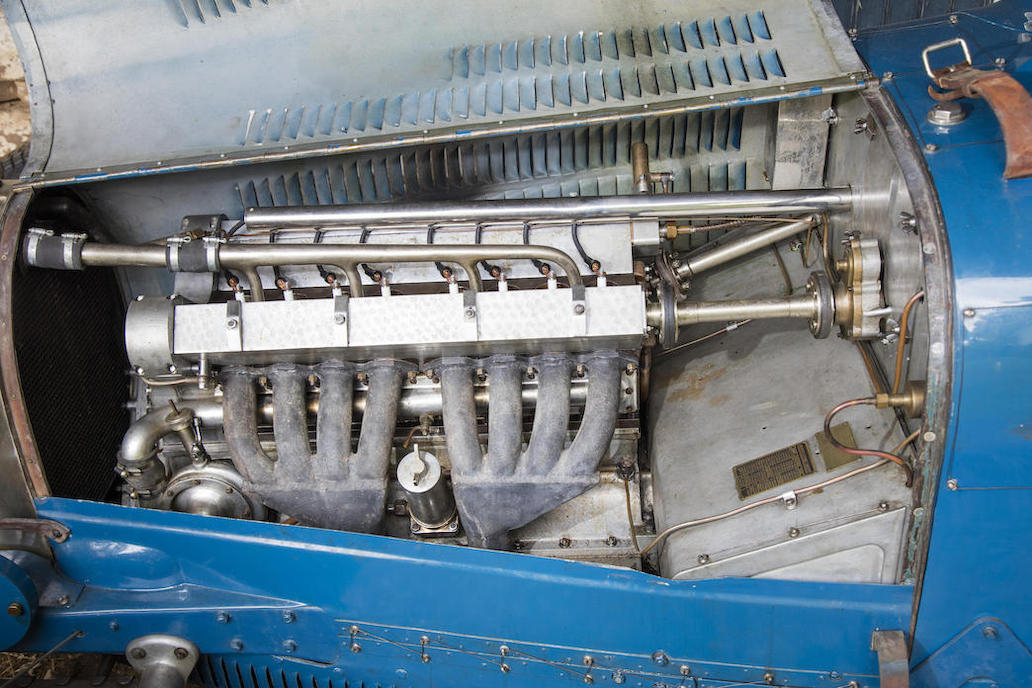 The Bugatti Type 51 shows its Yankee heritage from the Miller/Offenhauser DOHC technology.

So the Bugatti Type 51 has an American/French pedigree and is all the better for it. It sings like Frank Sinatra and Maurice Chevalier doing a duet.

The blue Bugatti Type 51 in all our photos is coming up for sale by Bonhams at their Quail Lodge Auction to be held at Carmel, Quail Lodge & Golf Club, Quail Lodge’s West Field, 7000 Valley Greens Drive (at Rancho San Carlos Rd), Carmel, California, USA on 19th August 2016. 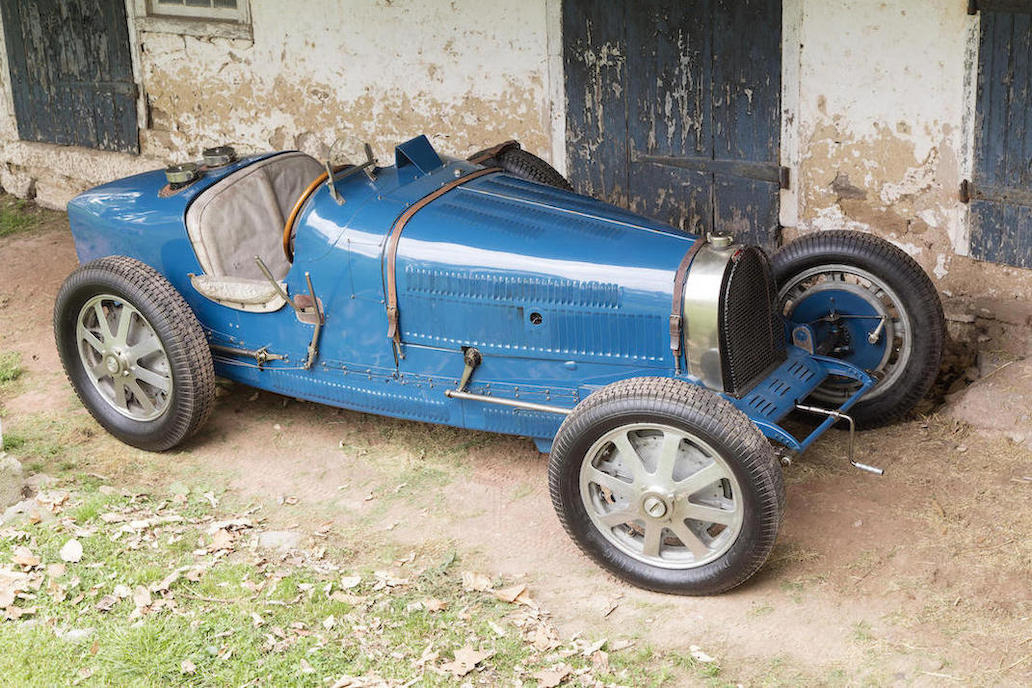 This Type 51 Bugatti has a lot of history and a lot of character.

This particular car was privately purchased by a gentleman racer Earl Howe. The car is according to its chassis number the first Type 51 built (chassis number 51121). The car was first campaigned in the 1931 Monaco Grand Prix, followed by the French GP at Montlhéry, and the German Grand Prix at Nurburgring. 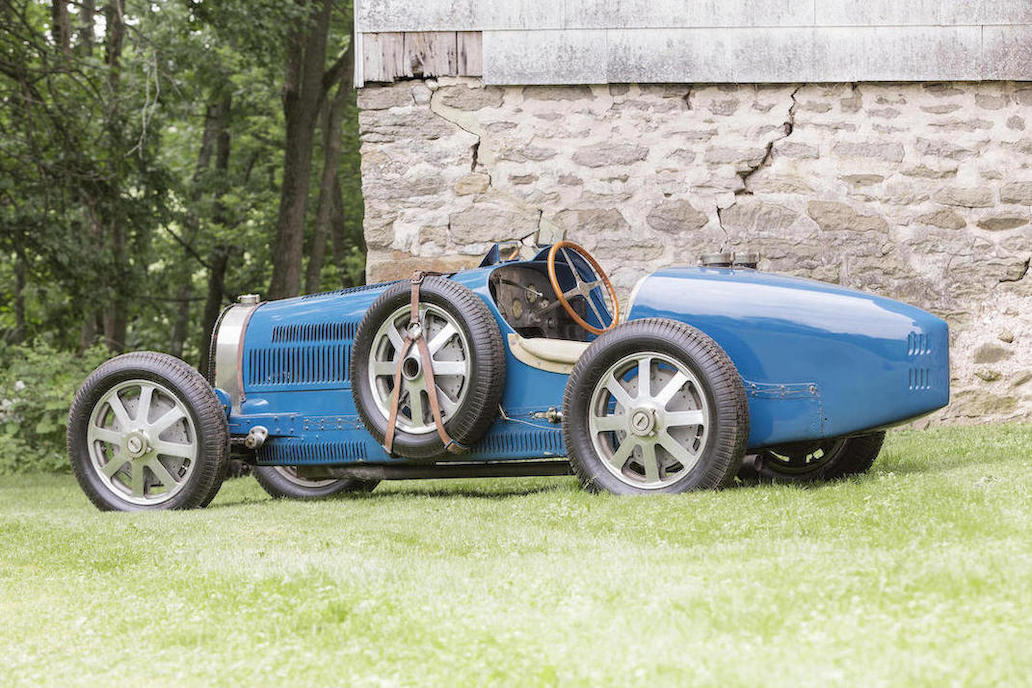 The Type 51 is the epitome of the gentleman’s sports car.

In 1932 the car was entered in the Monaco Grand Prix again and this time managed a respectable fourth place behind the Bugatti works team cars and an Alfa Romeo 8C. Earl Howe continued to compete with the car at Brooklands and in Britain up until he parted with it in 1935. 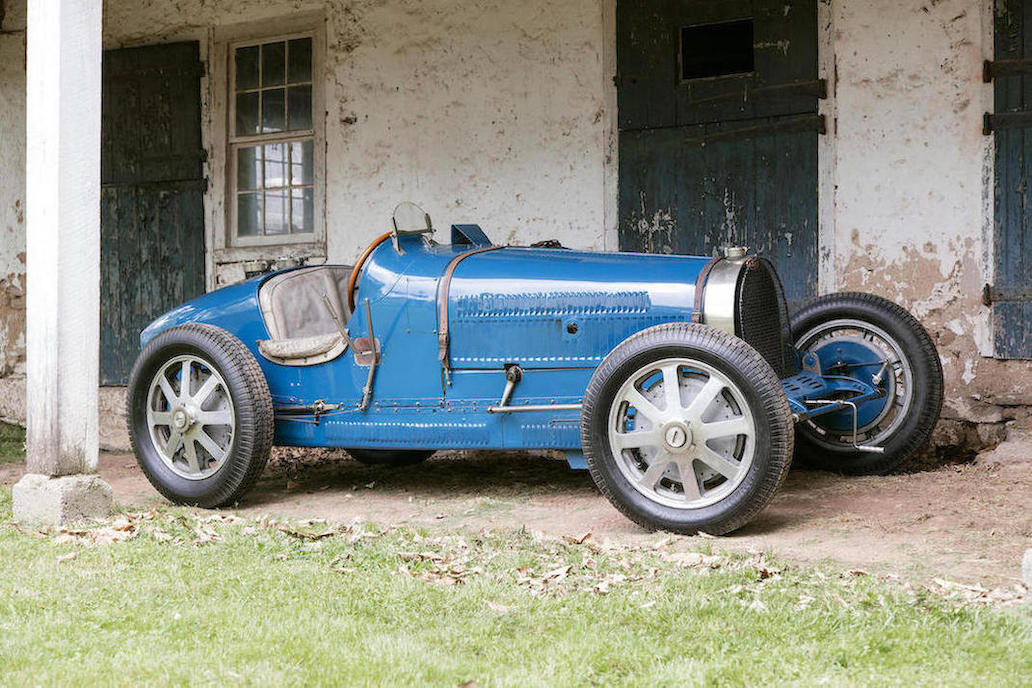 This Bugatti looks like the veteran campaigner it is.

This Bugatti Type 51 is a veteran campaigner with lots of stories to tell. This is still a working track car with the promise of all the enjoyment one can have with it still despite its age and history. This is a car in which one can drive and re-live the era that gave us some of the greats of motor sport, including Tazio Nuvolari, and Juan Miguel Fangio. A gentleman’s racer.