If considering the perfect gun for the “World wide one gun hunter” then most of us think about a rifle chambered for a common “all around” cartridge that meets legal minimum caliber requirements everywhere we intend to hunt. That normally means a .375 Holland & Holland rifle that is in accordance with the hunter’s taste if Africa’s “Big Five” are on the list of game to be taken, or one of the .300 Magnums if Africa’s “Big Five” are not on the list but long range shots to take mountain sheep and plains antelope are. Of course having just one caliber as a “one size fits all” is not necessarily going to cover all the bases and an ideal gun is likely to be one that includes more than one rifle caliber and includes a shotgun also. Enter the Beretta SS06 over/under which can be used with 12 gauge shotgun barrels and with double rifle or combination barrels also. 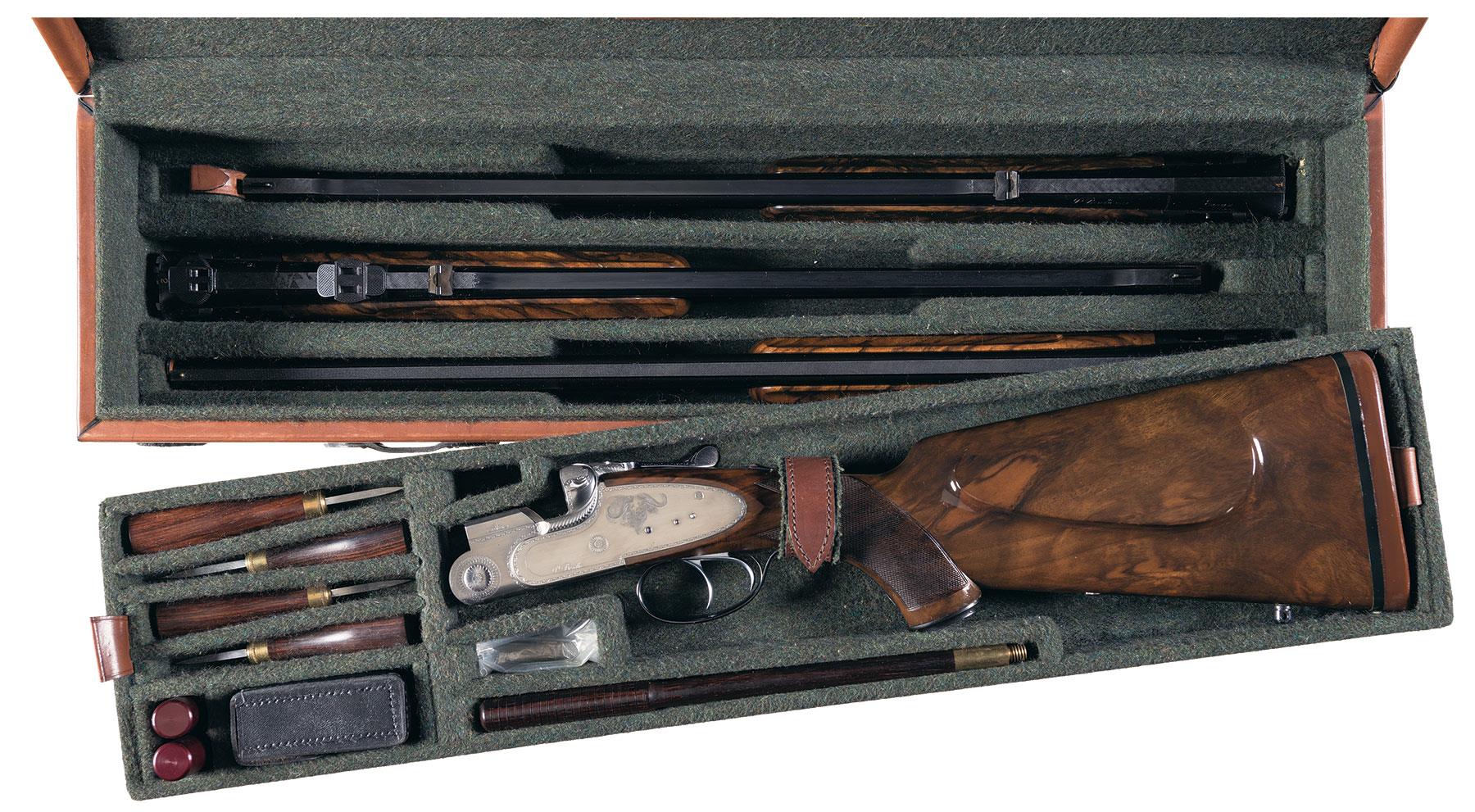 This “World wide one gun” kit comes with two sets of double rifle barrels, one in .375H&H Magnum and the other in .458 Winchester Magnum, and a set of 12g shotgun barrels. (Note: to see this picture full size right click on the image and choose “View Image”).

Appropriately the .375H&H Magnum barrel is fitted with integral bases for rifle-scope claw mounts. This rifle/gun also has some nice additional features; in the base of the butt stock is a cartridge trap that can hold two additional rifle cartridges, and there is a small trap in the pistol grip cap for keeping small parts such as a spare foresight. The kit comes in a fitted case complete with a three-piece wood cleaning rod, two 12 gauge snap caps, cleaning rod heads, and four turn-screws fitted specifically for this gun.

The engraving of the action includes an African Cape Buffalo on the left lock, a lion on the right lock, and underneath the action is a Kudu.

On the right lock is the engraving of a lion.

This “World wide one gun hunter” kit is coming up for sale by Rock Island Auction at their Premiere Auction to be held from May 5th-7th, 2017.

You will find the sale page for this rifle/gun if you click here.

Rock Island Auction describe the condition of this rifle/gun as follows: “Excellent. 99% original blue and coin finish remains with minimal light handling marks overall. The butt-stock has a few small dings but otherwise is excellent. Mechanically excellent. The forearm for the shotgun barrels is cracked on the left side just ahead of the hinge fitting. The case is excellent with a few light scuffs on the exterior.”

This is a cased set that would provide for hunting Africa’s Big Five and plains game, Banteng in Australia’s north, deer and boar wherever they may be found, and is good for some bird shooting as well. It is a nice, and very practical set.

On the underside of the action is a Kudu.