Back in the days when I was involved in competitive pistol shooting I was shooting with a Walther OSP for the Olympic Rapid Fire match, a Walther GSP for the Standard Pistol Match, and a Vostock for the Olympic Free Pistol match. All three of these pistols position the shooter’s hand high. The Russian Vostock placed the shooter’s hand so high that the trigger finger and thumb were on the barrel line whilst the OSP and GSP being semi-automatic positioned the hand as high as possible whilst clearing the breech bolt. So when it came time to shoot my Colt 1911 or a revolver it was a totally different experience because the hand is positioned so much lower. The upshot of having the hand located lower on the pistol is that the recoil has the tendency to rotate the pistol upwards and then when the slide springs forward it tends to rotate the pistol in the opposite direction causing the muzzle to drop down below the line of sight. It’s for this reason that some pistol coaches teach shooters to position their support hand forefinger under the trigger guard to control that return to battery rotation. 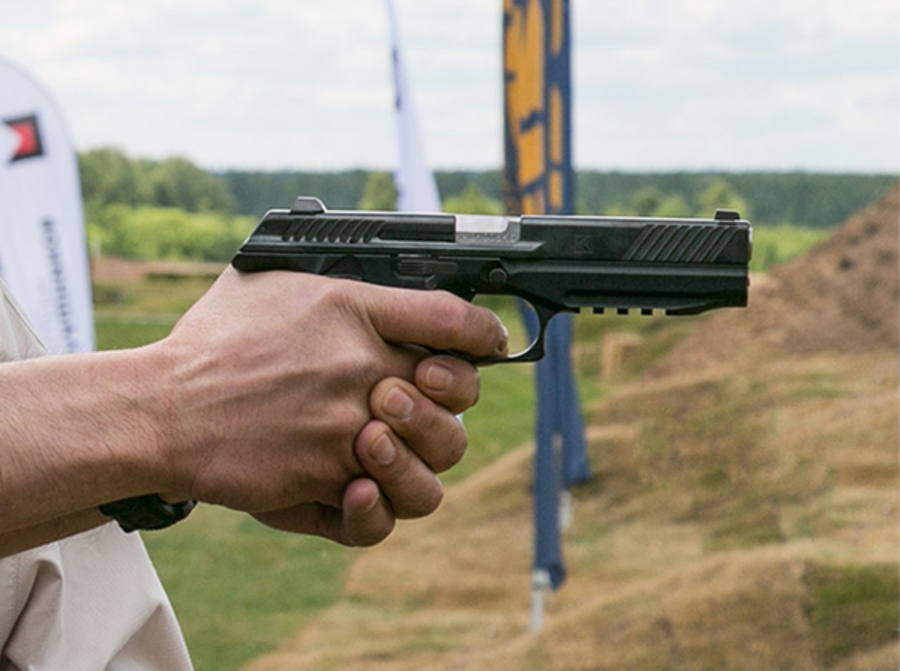 The Lebedev PL-15 positions the shooter’s hand as high as possible on the pistol to reduce the rotation caused by recoil and slide return to battery. (Picture courtesy armyrecognition.com).

When I saw the new Lebedev PL-15, a pistol so new that it is still in development, the first thing I noticed was just how high on the handgun the shooter’s hand is placed; very much at the height and angle of the grip on a target pistol such as the Walther OSP. This immediately looks like a target pistol built for practical police, military and self-defense use. The Lebedev PL-15 was originally designed by engineer Dmitry Lebedev in consultation with professional pistol users such as those in the police and military special units (eg. Spetsnaz) and also in consultation with competitive pistol shooters such as those involved in practical shooting disciplines IPSC and IDPA. Dmitry Lebedev’s prior developmental design was the PL-14 (i.e. “Pistol, Lebedev – 14) and that was followed in 2016 by the current development model the PL-15. 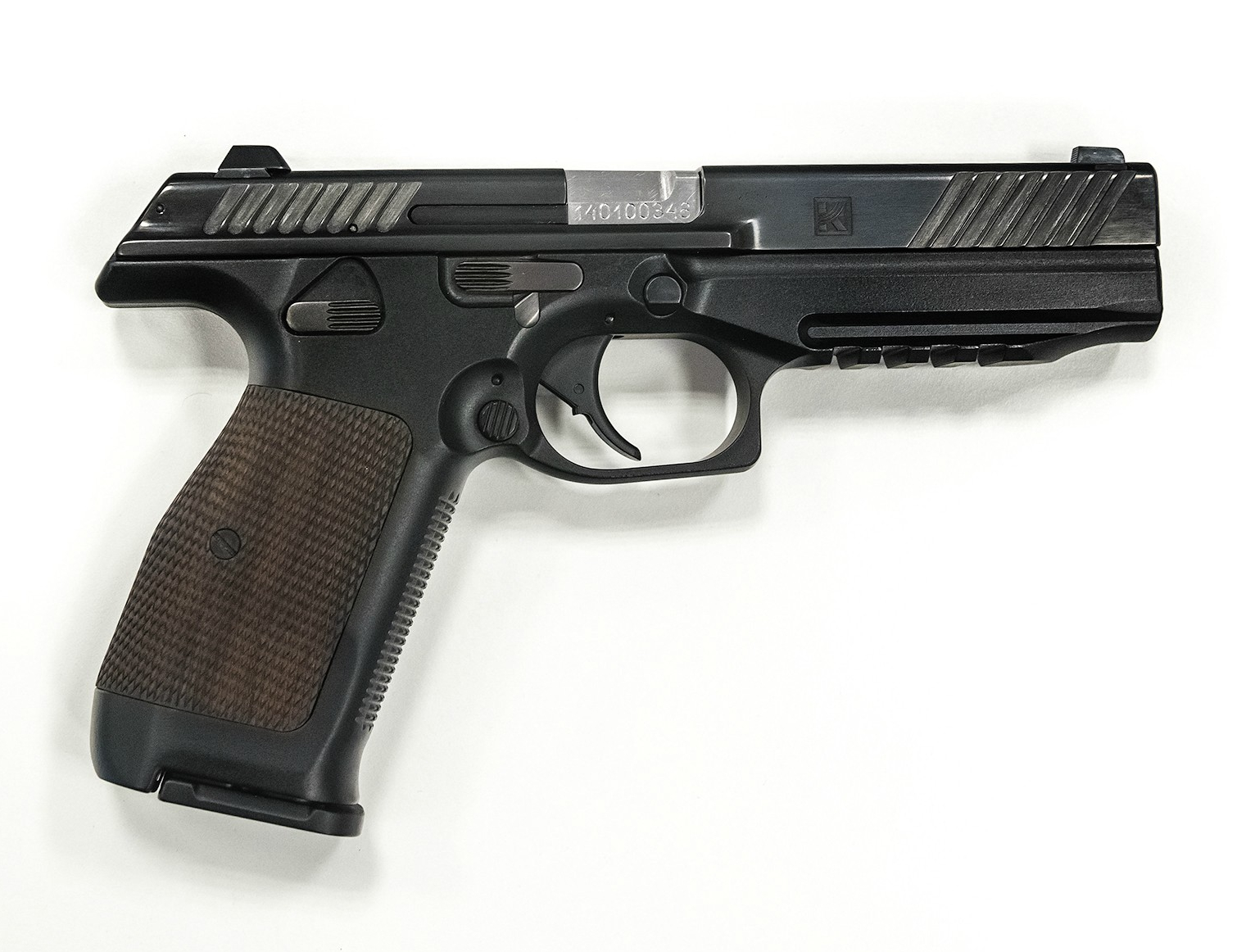 Lebedev PL-14; the prior development model to the PL-15. (PIcture courtesy outdoorhub.com).

The Lebedev PL-15 is a conventional delayed blowback pistol that uses a Browning type under barrel lug to lower the barrel and unlock it. The lock-up is achieved by use of a large ejection port into which the barrel lug locks in much the same way as is used on the Glock and as was used on the World War I vintage Webley Automatic Pistol. 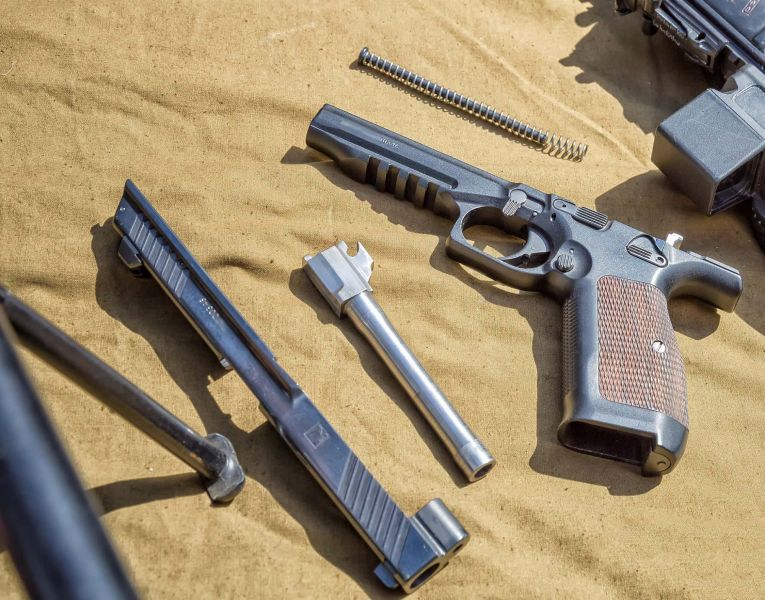 With the pistol field stripped we can see the Browning type under barrel lug used to lower the breech end of the barrel to unlock it. (Picture courtesy all4shooters.com).

Ergonomics have been the key priority in the design of the Lebedev PL-15. Both the safety catch and magazine releases are ambidextrous. The trigger is a double-action only type with a short 7mm travel and fairly heavy 4kg pull weight. Because this is a pistol for police and military use it is intended to have a trigger pull that provides a margin of safety against accidental discharge in crisis situations and in the event the pistol is dropped with the safety catch off. The pistol uses a conventional internal hammer not a striker. 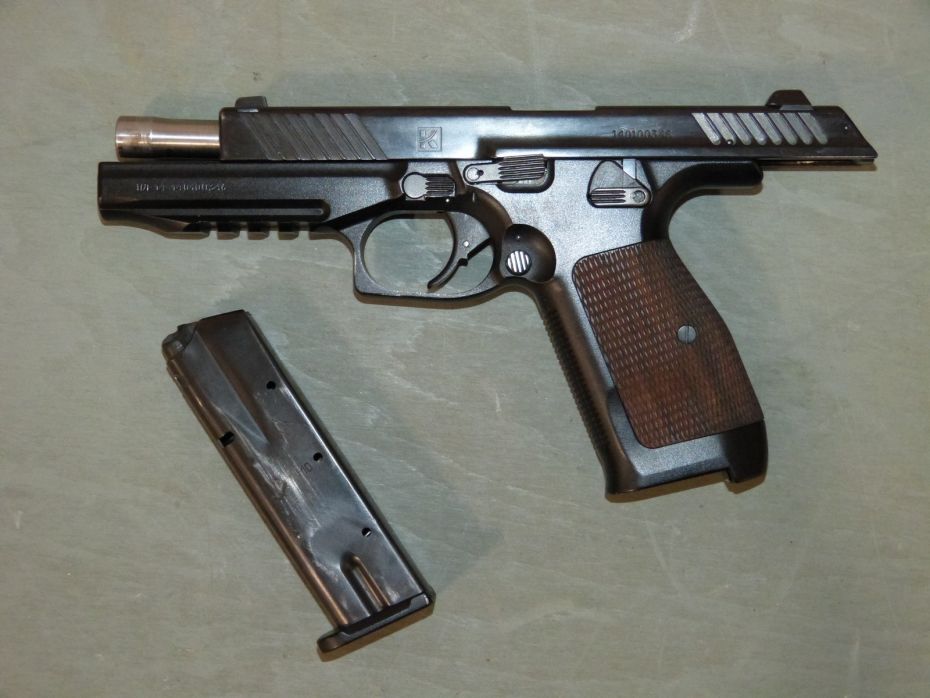 With the slide withdrawn the angle of the barrel in its unlocked position can be seen along with the increased diameter muzzle section to ensure good fit between the slide and barrel when locked in battery. (Picture courtesy all4shooters.com).

The current prototype Lebedev PL-15 is being developed by Kalashnikov at their famous Izhevsk Mechanical Plant and interestingly Kalashnikov are also developing their own fashion label. This company is of course named after legendary Russian designer Mikhail Kalashnikov who created the AK-47.

The Lebedev PL-15 has a loaded chamber indicator at the rear of the slide and the standard magazine capacity is 15 rounds with an option for a 19 round magazine. The pistol is chambered for the 9x19mm (9mm Parabellum) cartridge and is made to handle the Russian 7N21 version of the cartridge which is loaded to much higher velocity and pressure. 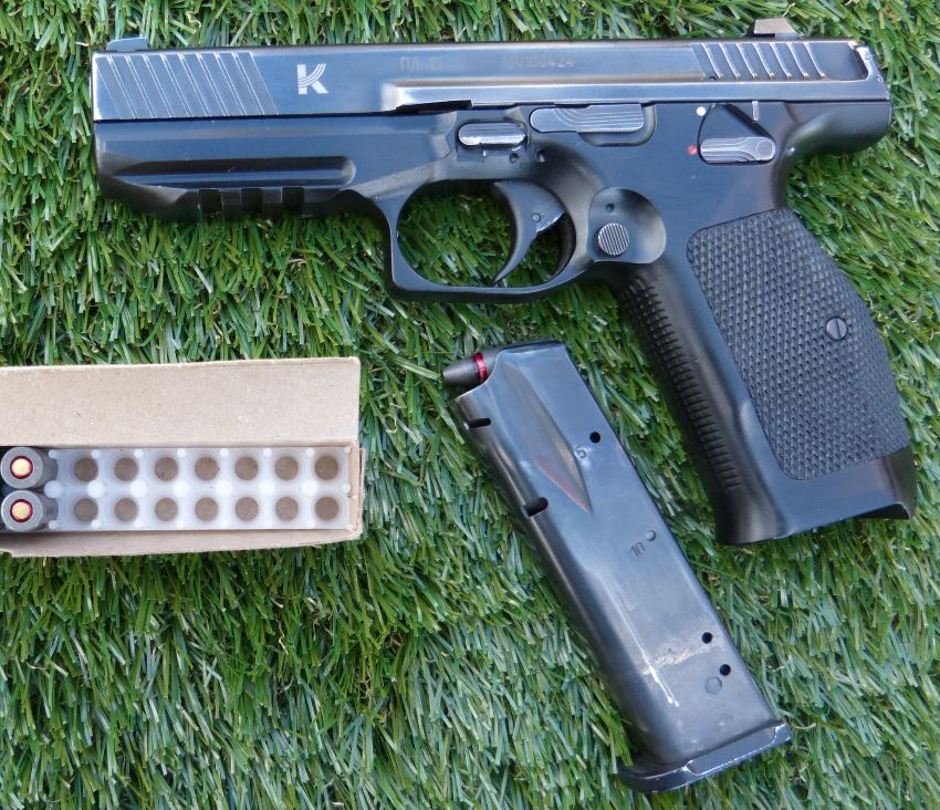 Lebedev PL-15 with magazine and 9x19mm ammunition. The pistol is designed to handle the high velocity Russian 7N21 loading of the 9mm Parabellum. The Kalashnikov logo is visible on the pistol’s slide. (Picture courtesy modernfirearms.net).

The Lebedev PL-15 is being made suitable for the attachment of the usual military and police accessories and has a Picatinny rail under the frame and can have the barrel extended and threaded for a sound moderator. 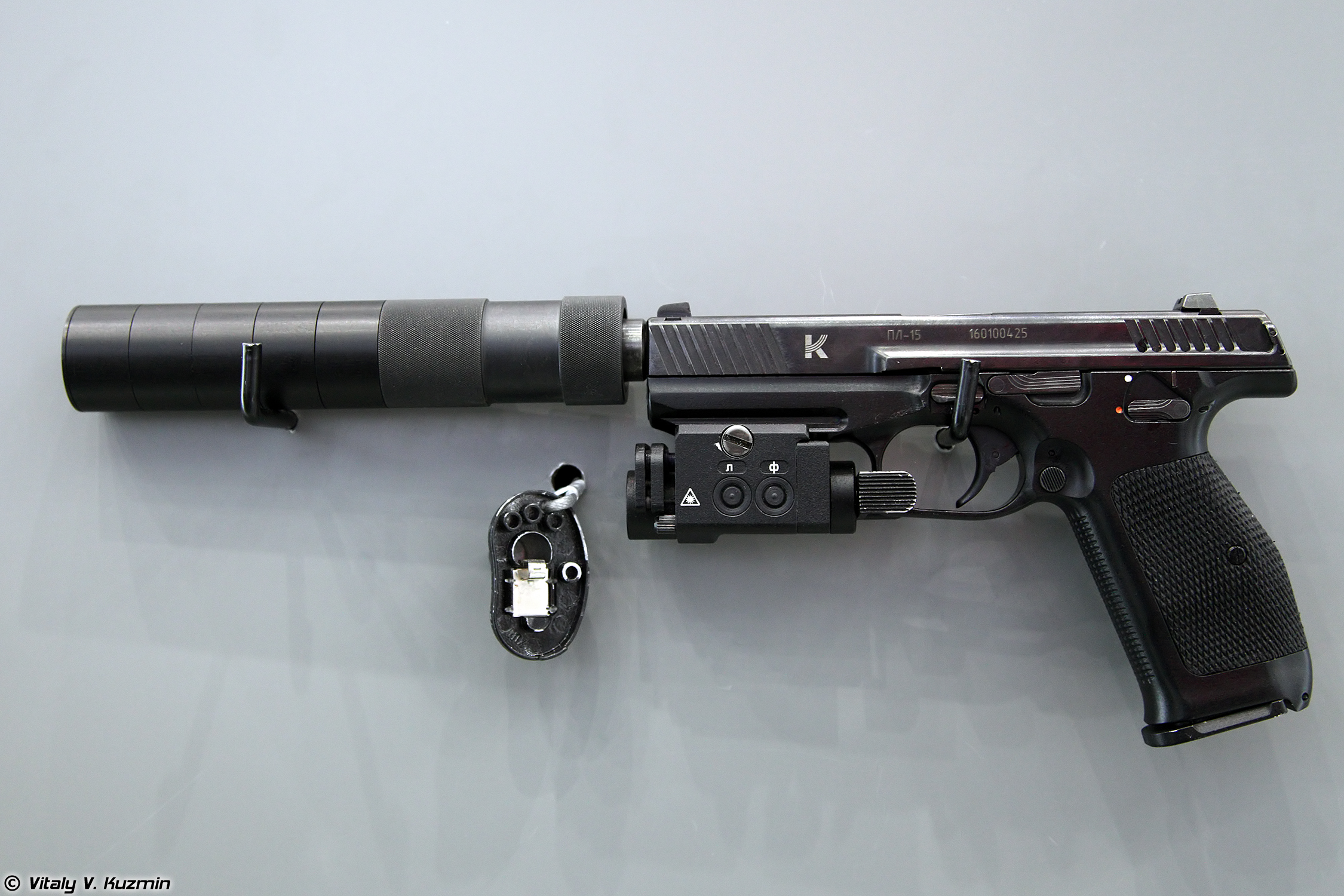 The Lebedev PL-15 looks like a very interesting new pistol from Kalashnikov. Whether or not it becomes as famous as the Kalashnikov AK-47 remains to be seen. But it certainly looks to be a very ergonomic design. 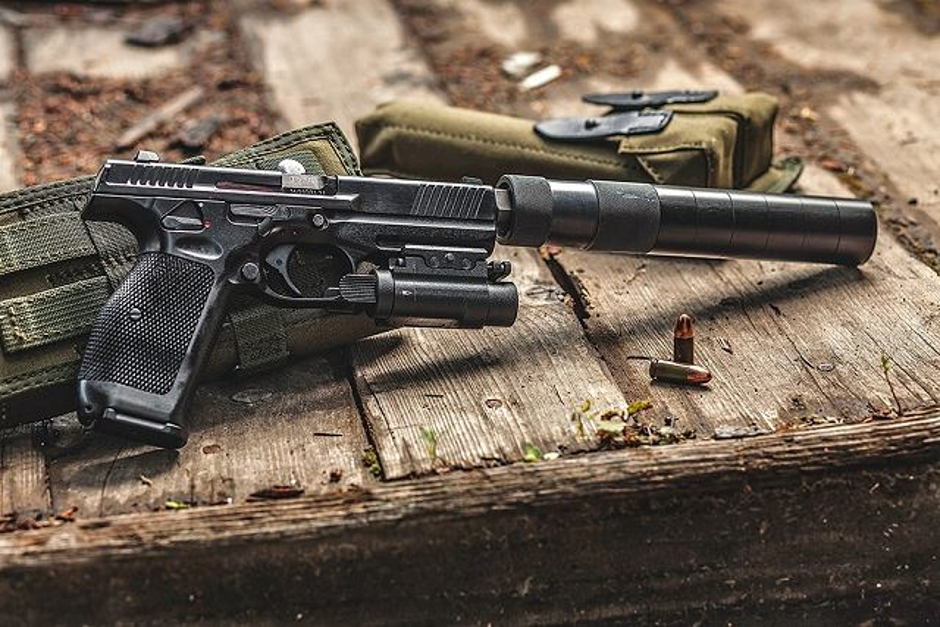