The name BRNO is one that most Americans will never have heard of, but when I was a young man living and working in the Western Australian Goldfields the first rifle I ever purchased with one of my first paychecks was a BRNO Model 2 .22lr rimfire. In that part of Australia the BRNO Model 2 was without doubt the most popular rimfire rifle and in second place was the Australian made Sportco, either the bolt action model or semi-automatic.

BRNO Model 2 almost identical to the author’s. This one is missing the tangent rear sight, which was adjustable out to 250 meters. (Picture courtesy henrykrank.com).

American readers will actually be familiar with this rifle however despite not having the name BRNO associated with it. The BRNO Model 2 is now sold in the US as the CZ 452, now being sold as the “Grand Finale” as it is phased out in favor of a new model. This is because BRNO morphed into CZ in recent years.

Back in the Western Australian Goldfields in the first half of the 1970’s the favorite centerfire rifle seemed to be a BRNO Model ZKK-601 in .243 Winchester. That seemed to be the rifle of choice for everything from kangaroo culling to reducing the population of wild donkeys.

The next model up from the ZKK-601 was the long action ZKK-602 which was chambered for cartridges up to the .375 H&H Magnum and .458 Winchester Magnum. Recently I had the opportunity to shoot one of these vintage rifles that had been re-barrelled in .470 Capstick. It was a real “blast from the past” and was a rifle I would very happily have taken home: but the Good Book says “Don’t covet …” so I had to give it back.

BRNO History, the BREN, and my Mother

The city of BRNO had been a fortress city with a strong military history dating back to the Hussite Wars of 1428-1430 and the Thirty Years War during the 1600’s. By the 1800’s BRNO had become an industrial center sometimes referred to as the “Moravian Manchester” after one of Great Britain’s industrial cities. At the end of the First World War in 1918 the newly formed First Republic of Czechoslovakia was established  and the following year the BRNO State Armory and Automotive Factory was also founded, marking the beginning of the company that would be known as BRNO, and later CZ. 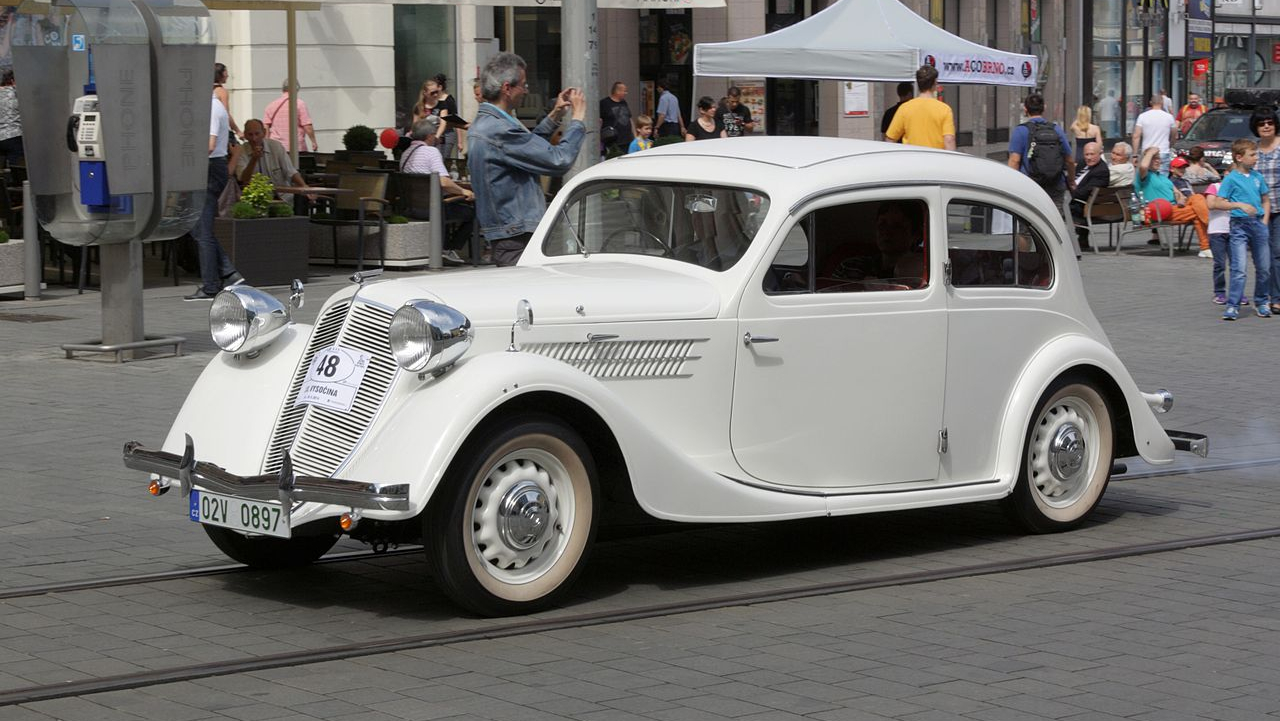 In addition to making arms BRNO also made automobiles. Their Z5 Express was one of the prettiest. (Picture courtesy [email protected]).

Because of the Treaty of Versailles Germany was not allowed to produce arms and so BRNO were able to purchase machinery from Mauser Oberndorf and begin manufacture of Mauser ’98 rifles. They also began manufacturing the Mannlicher rifles as originally made by Steyr of Austria.

It was during these inter-war years that the newly established BRNO developed one of the most famous machine guns in history. This light machine gun was originally the BRNO ZB vz.26, with a vz.27 having been submitted for British Army trials in the 1930’s. This was the gun chosen by Great Britain as the basis for its new light machine gun. This was modified to fire British Standard .303 ammunition and became the ZGB 33, better known as the “BREN” (the word coming from BRNO and ENFIELD). 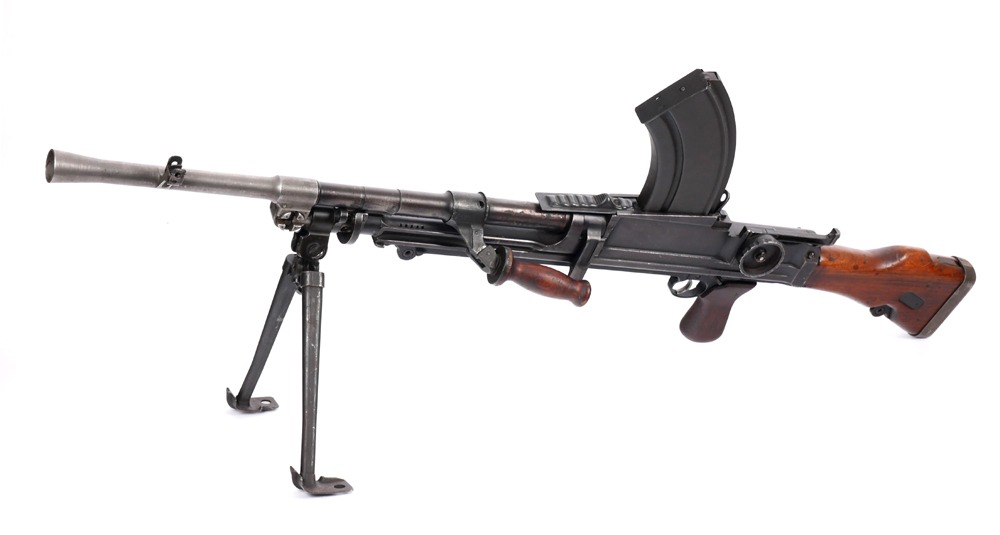 This was to be a machine gun of significance to my family also, because at the outbreak of the Second World War as my father went to serve as a D.E.M.S. gunner (Defence of England’s Merchant Shipping) my mother went to work at the Royal Small Arms Factory (RSAF) Enfield Lock, and her job there was to make Bren guns, mainly the breech-block although she also had time learning how to make barrels.

So BRNO has strong connections with Britain, Australia, and the whole of the British Commonwealth, and I have a bit of a soft spot for their guns.

The story of how my first rifle came to be a BRNO begins in the post World War II period when Czechoslovakia came under socialist rule and the arms factory was instructed to make sporting arms both for the local market and the export market. BRNO appear to have had a very good idea as to what the post-war sporting arms market would demand and they set about creating their products tailored to what sporting shooters would want. They also tailored their designs to keep them in the affordable end of the market so that ordinary sporting shooters would be able to afford them.

The BRNO designs were world class, manufacturing was good and quality control was good. Under socialist rule they were not able to have the quality control at the highest level, but what they made was so good, and so affordably priced that their guns achieved very high levels of market penetration, and customer loyalty. 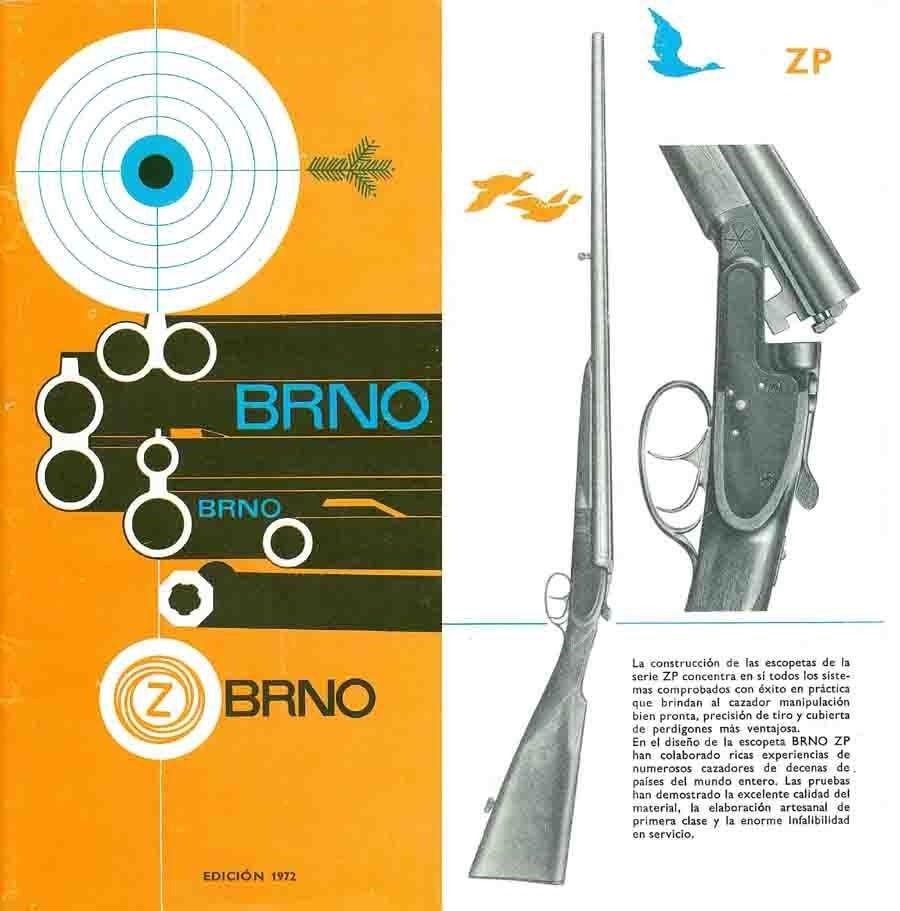 The cover of this BRNO catalog from 1972 gives a quick hint as to the range of sporting arms the company manufactured. (Picture courtesy BRNO).

While the bolt action rifles proved to be by far the most popular BRNO models the company produced break action double shotguns, combination guns, and double rifles also. In addition to the BRNO Model 2 I had the opportunity to own a BRNO ZP49 side by side sidelock ejector 12 gauge: but the rifle I would have loved, and still have a penchant for, is the BRNO Super 575 double rifle.

The action of the 575 Super double rifle was engineered for strength and featured double under-locking lugs and twin Kersten top bolts as well. It is a design that incorporates best practice features for an over/under double rifle. 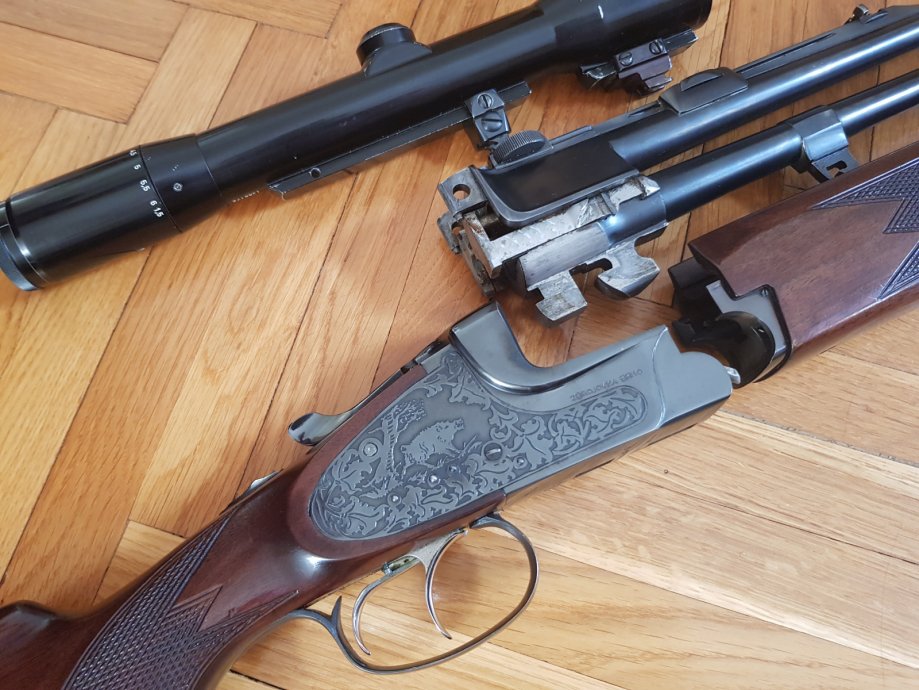 With the rifle taken down the strength of the action can be appreciated. This is a very intelligent design. (Picture courtesy njuskalo.hr).

This close-up of the underside of a BRNO Super 575 shows that one of the under-locking lugs is intentionally made to slightly protrude so that if the action was stuck shut a rubber mallet or similar device could be used to knock it open. Also note the trigger adjustment screws. (Picture courtesy Cowan’s).

A look at the underside of the BRNO Super 575 shows that one of the under-locking lugs was intentionally left with a rounded protrusion so that it could be pressed or given a bit of a whack with a rubber mallet if the action should freeze shut.

Put the BRNO Super 575 in a properly fitted English “best gun” style case and it makes and impressive display. The riflescope is an East German Carl Zeiss. These were normally of fixed 4x and had both adjustment turrets on the top in the same style as the Hertel & Reuss riflescopes which are familiar to Americans as the original riflescopes fitted to Weatherby rifles. (Picture courtesy Cowan’s).

The BRNO Super 575 double rifle, as a true sidelock, provided two barrels with two independent triggers and firing mechanisms. The sidelocks used coil springs for good longevity. This made it a proper dangerous game rifle as long as it was in an appropriate caliber. 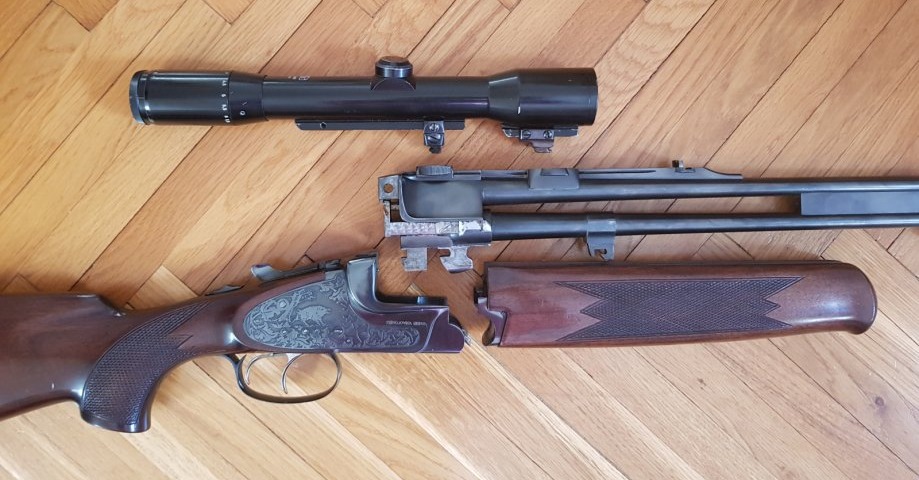 Back in the 1970’s and 1980’s the main available cartridge choices for dangerous game were the .375 Holland & Holland Magnum and the .458 Winchester Magnum. These would be the African mainstay until a renaissance in African big game hunting brought about the revival of some of the British big game cartridges, notably the .470 Nitro Express and .500 Nitro Express. The .458 Winchester Magnum got off to a bad start however and took some time to regain people’s confidence, which may explain why BRNO decided not to chamber the Super Express 575 for it.

In Asian countries such as Indonesia before the ban on private firearms, the 9.3 mm cartridges seem to have been popular. So in the period when it was being made the Super 575 was made in two of the most popular heavy game calibers.

As a stalking double rifle the Super 575.1 in 7x65R would be superb for non-dangerous game (although Jim Corbett did his tiger hunting with a .275 Rigby which is a tad less powerful). For general hunting the 9.3x74R is superb, and of course the .375 H&H Magnum is legendary and meets minimum caliber requirements in most places one might go hunting. So BRNO were wise in their choice of calibers for the Super 575. 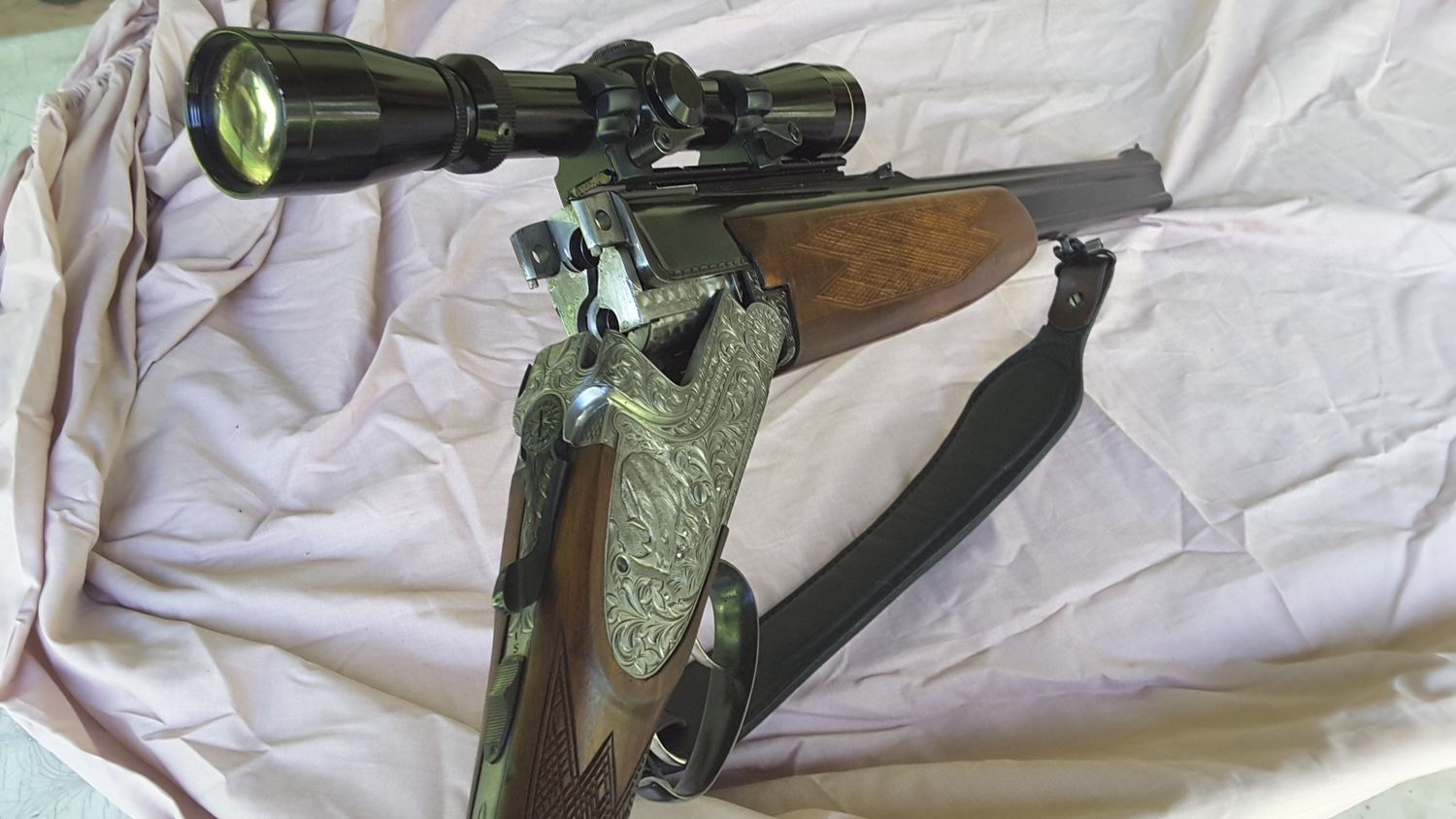 With the action open the Kersten bolt mechanism can be appreciated. (Picture courtesy ssaagunsales.com).

Nowadays if it were going to be made again we would hopefully see the Super Express 575 made in .470 NE, and such a rifle would likely be an absolute joy. Especially if provided with ejectors to make reloading quick and convenient, because sometimes two shots is just not enough.

The BRNO Super 575 is a rifle that we don’t often come across. The design looks to be superb, and the quality of BRNO arms made during the 1970’s and 1980’s was good, just as the quality control on CZ rifles made nowadays is good.  With modern CNC manufacturing it would seem that it would be possible to put this model back into production along with the over/under shotgun and combination gun models that shared the same action. I guess what would be needed would be a revival in interest in double rifles so there was a profitable market for these superb over/unders. 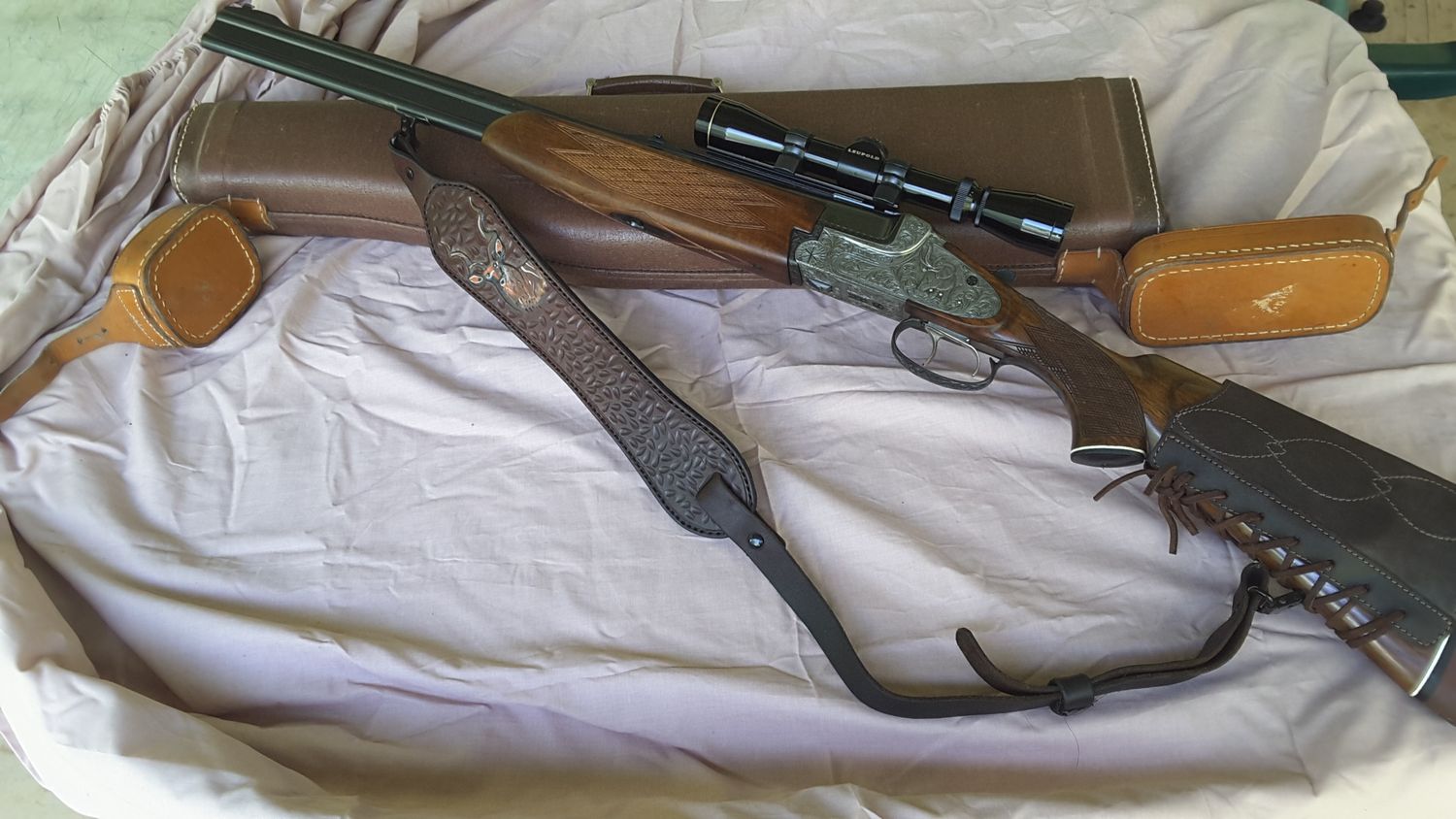 Other than that perhaps another riflemaker might decided to use this design to create bespoke over/under double rifles of their own. There are folks out there who, like me, prefer the over/under double rifle, as long as it has efficient ejectors, so there should be enough customers out there. Other than that perhaps there might be a “pre-owned BRNO Super Express 575.2 .375 H&H in my future. Do you also have a gap in your rifle safe just waiting to be filled with one of these fascinating rifles?