The .40 G&A pistol cartridge is one that relatively few have heard of but it was one that helped pioneer the creation of the two predominant .40 caliber handgun cartridges we have with us today; the 10mm, and the .40 S&W. The .40 G&A was not just one wildcat cartridge however, it was made in two versions, one on a rimless case based on the .30 Remington rifle case, and the other based on the belted .224 Weatherby case. The belted version is referred to as the .40 G&A Magnum. 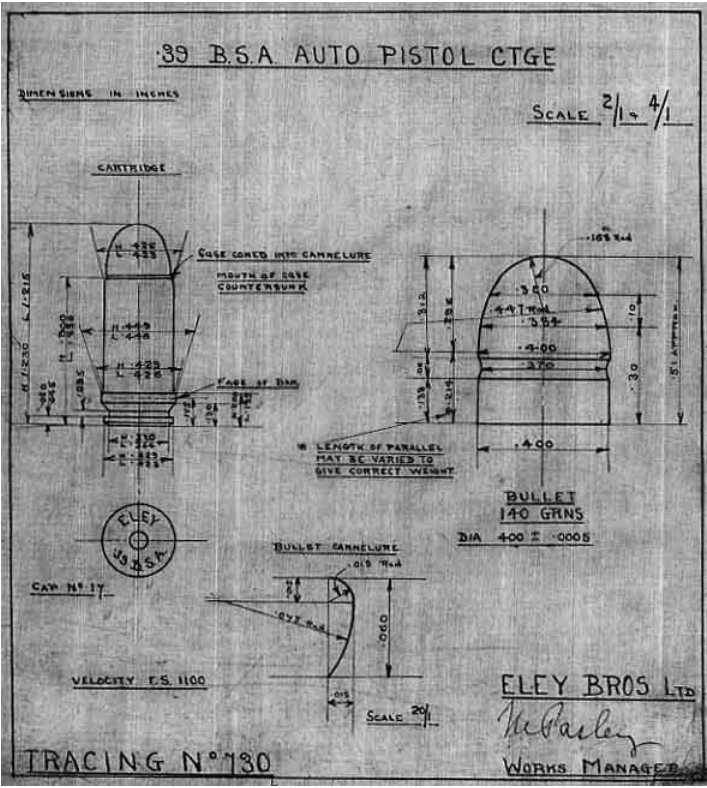 The first effort at creating a pistol cartridge with a belted case was the .39 BSA of 1920. (Picture courtesy [email protected]).

Work on the idea of a .40 caliber handgun cartridge in the United States was arguably begun in the early 1970’s by a man named Whit Collins. This was not the first effort to develop a pistol cartridge of this class however, nor was it the first effort at making a pistol cartridge that used a belted case. The first was most likely the .39 BSA, developed by Birmingham Small Arms back in 1920, when the British firearms industry was still in its heyday. There had however been another .40 caliber pistol cartridge developed in the United States that preceded the BSA effort, and that had been by John Moses Browning back in 1910. Browning created a prototype pistol that was a slightly scaled down version of his M1911 design, and chambered for the 9.8mm Colt cartridge. Browning’s design used a rimless case like the first version of the .40 G&A. 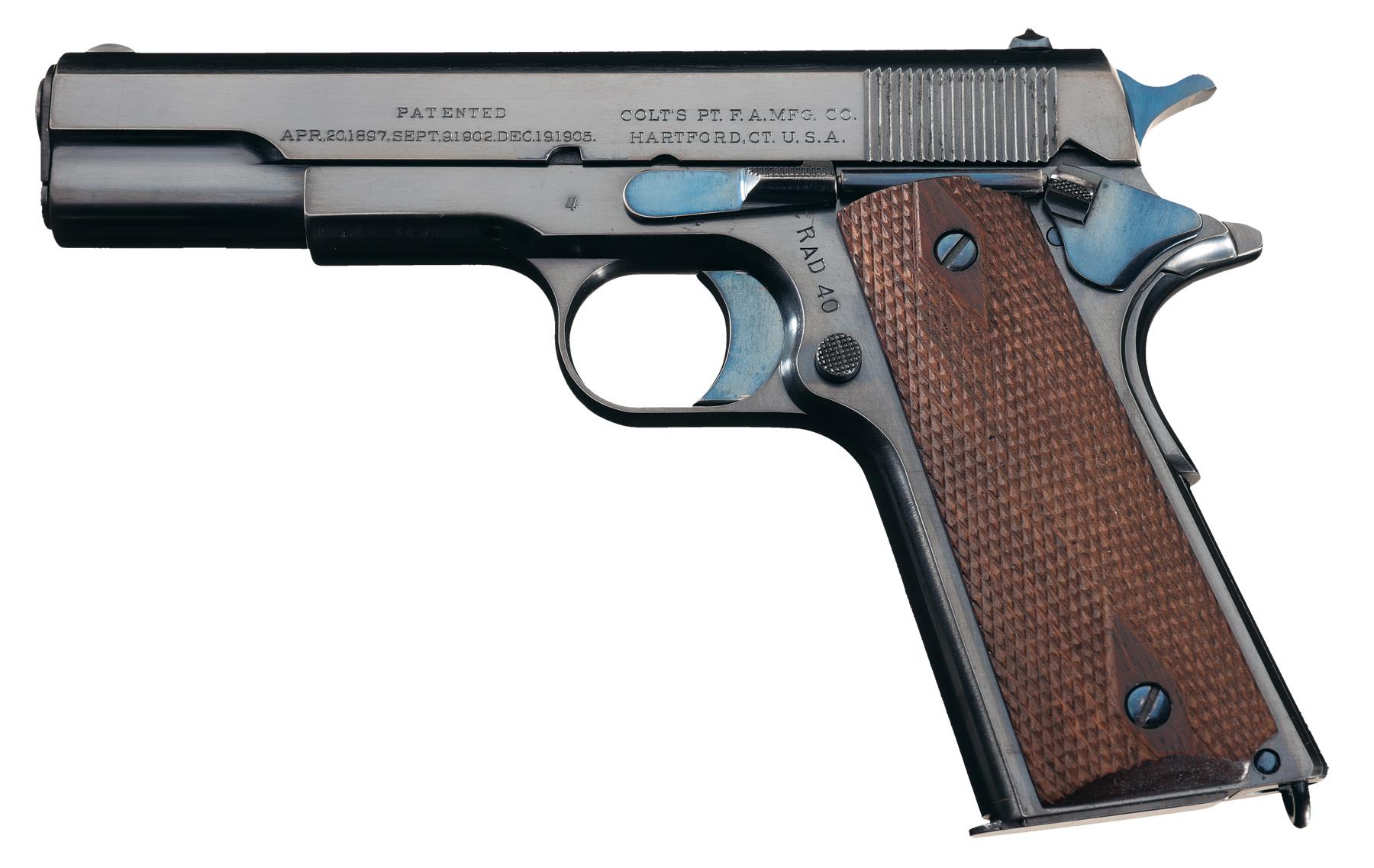 Only four prototype pistols are believed to have been made in 9.8mm Colt. This one sold for USD$63,250 back in 2012. Note the marking “RAD 40”, which means “Research And Development .40 caliber”. (Picture courtesy Rock Island Auction).

One of the main protagonists of the .40 caliber pistol is acknowledged to be Jeff Cooper and it was his influence teamed up with Whit Collins that got the project underway in the early 1970’s. The project was assisted by Guns and Ammo magazine and so the resulting wildcat cartridges bear the “G&A” name. Whit Collins decided to use the Browning Hi-Power pistol as the vehicle that the new cartridge would be created for. With its 13 round double stacked magazine and its refined Browning design this was one of the great pistols of the 20th century. It was the standard issue side-arm for British Commonwealth military forces and it had earned itself a solid reputation. The only issue was of course the perceived lack of stopping power of the 9mm Parabellum cartridge it was chambered for. The new .40 caliber cartridge was intended to remedy that shortcoming. Part of the inspiration for the new .40 caliber cartridge in an automatic pistol no doubt also came from the work being done by Elmer Keith and Skeeter Skelton to create the .41 Remington Magnum revolver cartridge that would put life-saving power in the hands of police officers. 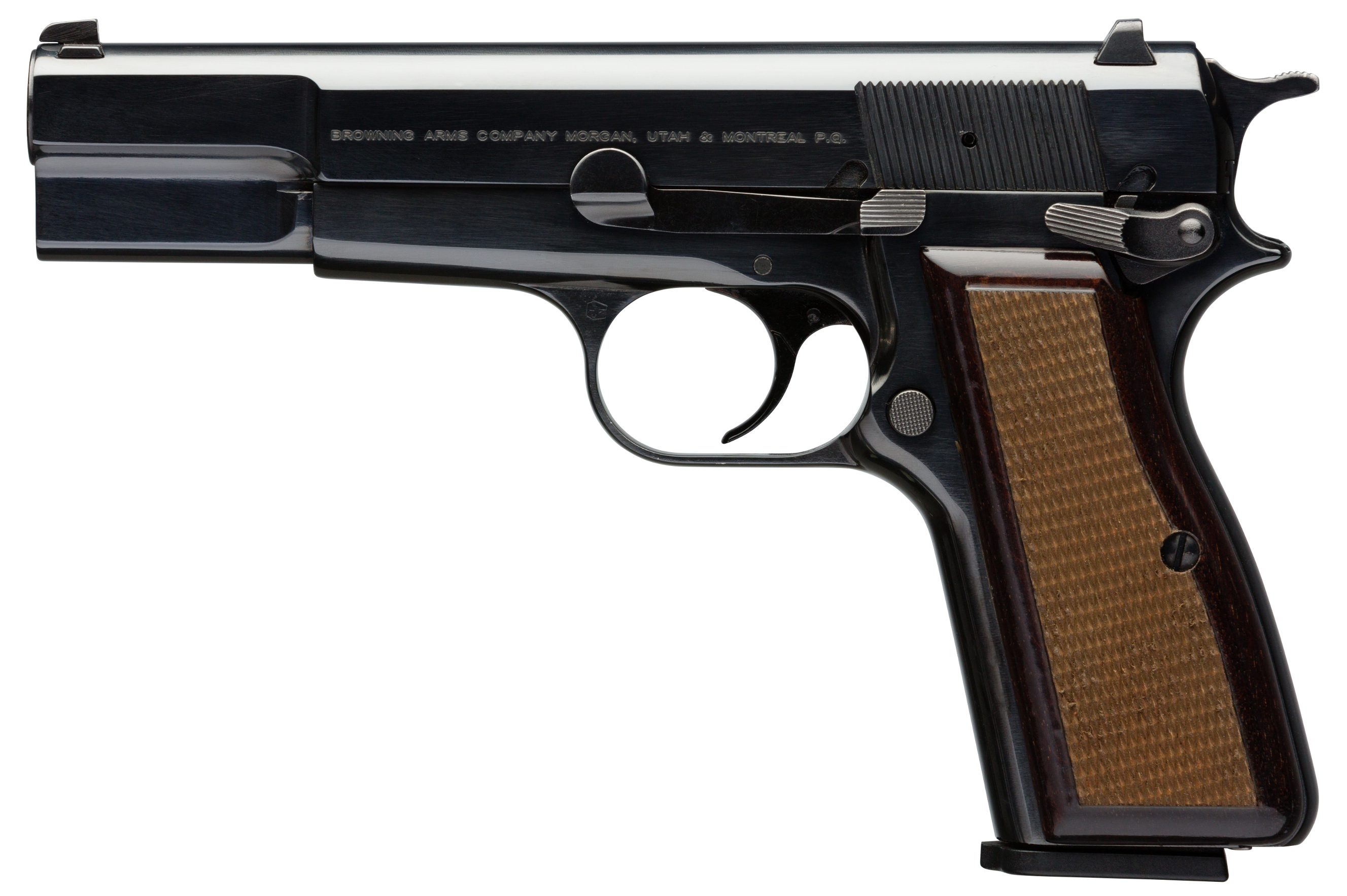 The Browning Hi-Power is still in production. The excellence of its design made it the ideal choice for the creation of the .40 G&A. (Picture courtesy Browning).

The first version of the .40 G&A was based on the .30 Remington cartridge case shortened to 0.866″/22mm and reamed to reduce the thickness of the brass. The loaded cartridge overall length was set at 1.095″/27.8mm so it would function in the magazine dimensions of the Browning Hi-Power pistol. The cartridge was intended to meet Jeff Cooper’s objective of driving a 200gn bullet at 1000fps. This design idea came from the dimensions and ballistics of the old 38-40 revolver cartridge which, despite its designation as a “.38″ actually used .40” caliber bullets and drove them at a tad over 1000fps. The 38-40 was well regarded as an “all around” caliber and was chambered in both rifles and revolvers. Whit Collins used 180gn .40″ bullets for the 38-40 in his development of the .40 G&A and managed to drive them at just over 1000fps.

The prototype pistol was created jointly by Irv Stone of Bar-Sto and master gunsmith John French. 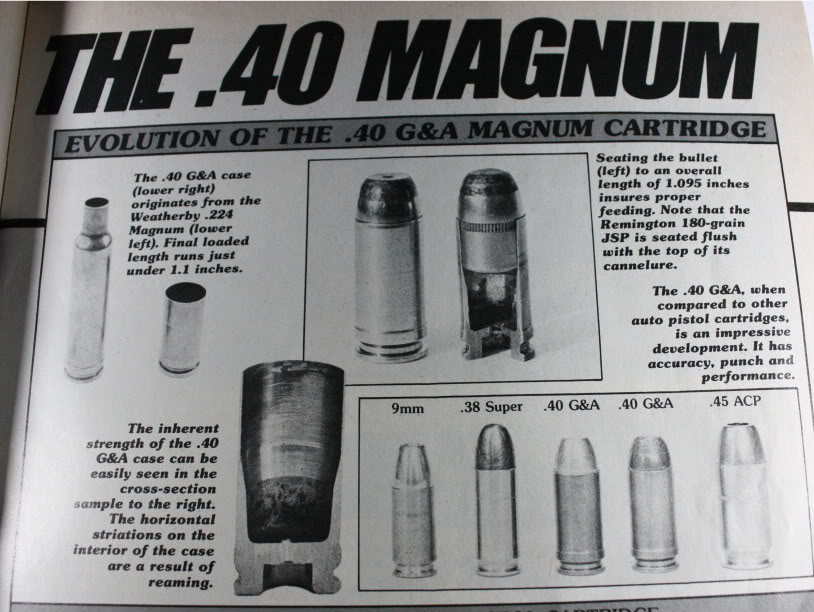 Those of us who were around in the 1970’s will remember it as a time of wildcats and belted magnums. In truth many shooters of the time were of the opinion that a cartridge had to have a belt in order for it to be a “magnum”. Whit Collins decided that his .40 G&A had potential but he wanted to achieve more from it. To this end he looked for a suitably sized belted magnum rifle case that he could use in the Browning Hi-Power and it likely didn’t take him long to figure out that the .224 Weatherby was about perfect. The boys went back to the workshop and trimmed a .224 Weatherby case down to 0.866″/22mm and reamed its thick brass so they could seat 38-40 bullets in it. This one they called the .40 G&A Magnum and it proved capable of driving the 180gn bullet at over 1,200fps and a 200gn at over 1,000fps. That is the cartridge that featured in the February 1977 issue of Guns & Ammo magazine.

One would think that with such impressive performance that the .40 G&A Magnum would be all set to become a world beater. It could have been. Had Inspector Harry Callahan used a Browning Hi-Power chambered for the .40 G&A Magnum delivering his famous “do you feel lucky…?” line it probably would have been. But Harry Callahan used a .44 Magnum revolver and Smith & Wesson Model 29 sales went from being indifferent to being so much in demand that Smith & Wesson couldn’t make Model 29 revolvers fast enough.

The .40 G&A however went into obscurity as a “might have been, but wasn’t”.

Jeff Cooper moved on from the project, discovered the CZ75 pistol, and was involved in creating the 10mm pistol cartridge and the Bren Ten pistol chambered for it. The 10mm is happily still with us, and its stumpy sibling the .40 S&W seems to be doing well also. 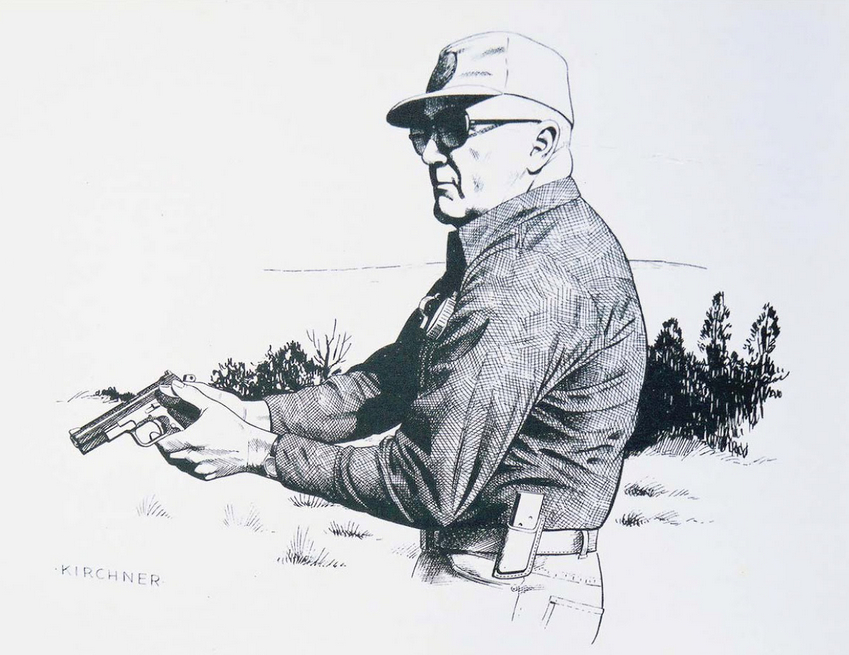 The .40 G&A and the .40 G&A Magnum helped pave the way for the creation of the 10mm and the .40 S&W. The belted case of the .40 G&A Magnum certainly looks impressive and its ability to provide positive headspacing was a great functional asset. One advantage was that because the headspacing was on the belt, and not on the case mouth, the cartridge could use a roll crimp on the bullet. You can see this design feature in the factory drawing for the .39 BSA above. The downside of the belt however was that ejected cases tended to suffer damage on the belt making them useless for reloading. Thus it is that the 10mm is the superior cartridge, and we hope it will be with us for the foreseeable future.