To handle a heavy caliber revolver you need to work up to it and you need to keep that practice up. The old adage “Use it or lose it” certainly applies to shooting and especially to shooting a handgun. Police practices around the world vary enormously down to jurisdictions where police only live fire with their carry handgun once per year and then typically for not a lot of practice shots. So we’ve seen a couple of dynamics taking place. In places where police are given minimal live fire practice there has been a tendency to arm them with the minimum caliber that might be expected to work, this typically meaning the 9mm Parabellum but downwards including the .380 Auto (9mm Short//Corto) and the 32 Auto. With that tendency has been a significant increase in the number of cartridges the issue handgun holds. So minimum stopping power combined with maximum number of rounds. This sort of thinking pretty much guarantees making an already dangerous situation more dangerous. If an officer needs to fire multiple shots then the risk to the officer is increased, and the risk to nearby innocent people who may be hit by rounds that have missed the intended target or fragments that are ricocheting off of hard surfaces. A bullet fragment that manages to rupture a major vital blood vessel in an innocent bystander is a very undesirable outcome.

The .41 Remington Magnum was created and initially marketed as a police cartridge that would provide a one shot stop on an attacker. (Picture courtesy ar15.com).

In the United States, because there is a much better developed “gun culture” than in most other places in the world even back in the 1920’s there was a realization that police officers needed more stopping power than the standard .38 Smith & Wesson or the .38 Special could deliver. This led to the development of the 38/44 cartridge in the Smith & Wesson N Frame revolver and in turn the 38/44 showed the way for the creation of the .357 Magnum thanks to Smith & Wesson designer Phil Sharpe and Colonel Douglas B. Wesson back in 1935.

The .357 Magnum turned out to be a roaring success in part because it permitted the use of mild mannered .38 Special and not at all mild mannered full charge .357 Magnum loads in the same revolver, and in part because it offered much better stopping power and the ability to penetrate the heavy steel car bodies of the day. But it was hampered by a lack of really good bullet designs that would come much later – so the full potential of the cartridge was not realized at that time.

A full power .357 Magnum revolver is a fearsome thing to a new shooter. My first exposure to one was very early in my shooting career. At that stage I was still thinking that a .38 Special was a lot more gun than a .22 rimfire. The Smith & Wesson Model 10 I was using regularly took some shooting practice before I started to feel reasonably comfortable with it. Tellingly I was regularly shooting it at a pistol club and so I was getting a lot more practice than most serving police officers and security guards at the time. But when I first saw and heard a .357 Magnum go off it can only be described as an ear buster of the first order. By comparison the 9mm Parabellum’s I got to fire were much more like the .38 Special in the Model 10. So I can very much appreciate how a police officer who has not had much exposure to center-fire handguns would find a .357 Magnum a very intimidating piece of ordnance. 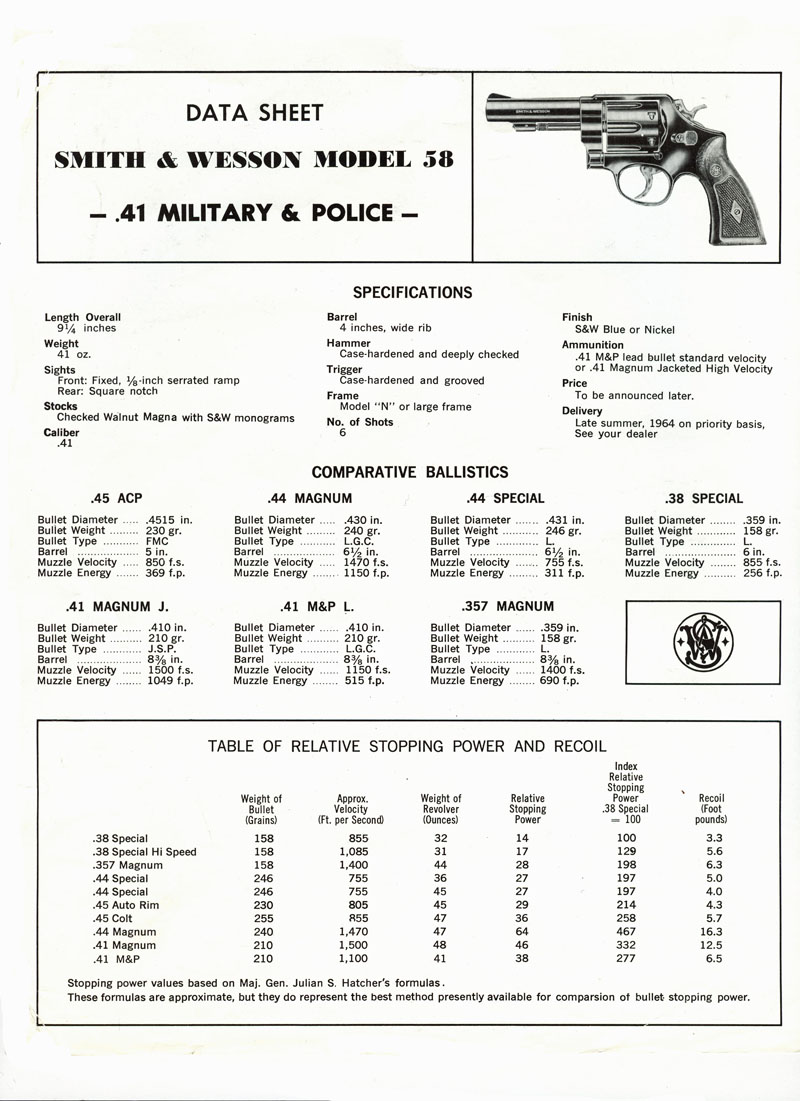 The table of relative power doesn’t account for how a recruit or trainee will handle the muzzle blast and felt recoil of a handgun. This oversight is what ensured the .41 Remington Magnum would not gain acceptance with police departments. (Picture courtesy ar15.com).

After the introduction of the .357 Magnum in 1935 a lot of Americans found themselves putting on uniforms and answering the call of Uncle Sam. With so many trained in the use of the .30/06 M1 rifle and the .45ACP Colt 1911 pistol there were a lot of men trained and provided with all the experience that the Second World War could give them. As a result as we enter the post war fifties there were a lot of ex-servicemen in the police forces of the United States. If ever there was a time to move up in the cartridge power stakes that was it. Elmer Keith and others worked to get the .44 Remington Magnum created and established and establish it they did despite the fact that .44 Remington Magnum revolvers are probably best described as “a brute to shoot”. Frank C. Barnes said of it “few who become acquainted with the muzzle blast and recoil of the .44 Remington Magnum feel any desire for something more powerful”. There were a few who did want something more powerful of course and it didn’t take long for the .454 Casull to appear and then guns got progressively bigger and heavier. But Elmer Keith, Skeeter Skelton and Bill Jordan (Author of “No Second Place Winner“) saw that what was really needed for police officers was a revolver cartridge that offered more convincing stopping power than the .357 Magnum but significantly less muzzle blast and recoil than the .44 Magnum. With such a respected trio of advocates Smith & Wesson along with Remington delivered the goods and created the .41 Remington Magnum cartridge and the beautiful but expensive Smith & Wesson Model 57, complete in a delightful fitted wooden box, and the much less expensive Military and Police Smith & Wesson Model 58.

As it turned out Keith, Skelton and Jordan were prophets before their time. But history has shown that they were right. 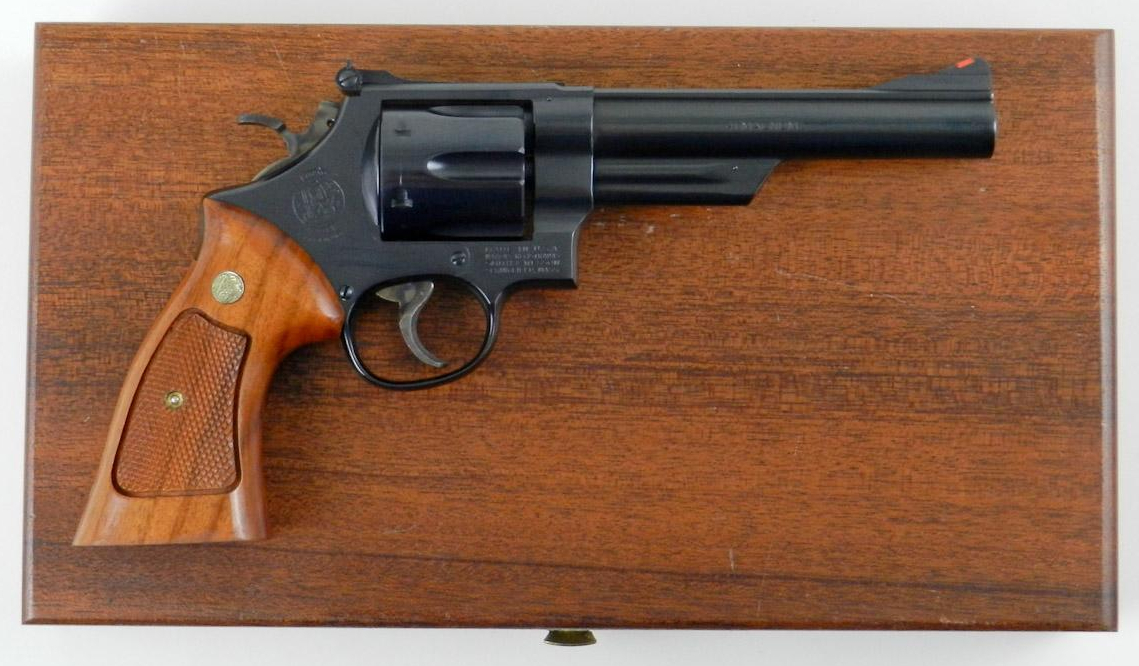 The original Smith & Wesson Model 57 was one of the top quality revolvers you could buy from Smith & Wesson when it was introduced. Each came in a fitted mahogany box lined with blue flocking and with a cleaning kit in the box. It was and is one of the most beautifully made and beautifully presented production revolvers Smith & Wesson have ever made and if any of you have one of these gathering dust that you don’t want please feel free to donate it to the crowd at Revivaler. We promise to give it an appreciative new home where it will get oiled regularly and fed a nice diet of not too heavily loaded cartridges every now and again. Similarly if you have the opportunity to acquire one of these then you should almost certainly go for it. It’s guaranteed to become a revolver you’ll develop quite an affection for.

The Smith & Wesson Model 57 is still in production in the Classics line and you will find it if you click here. 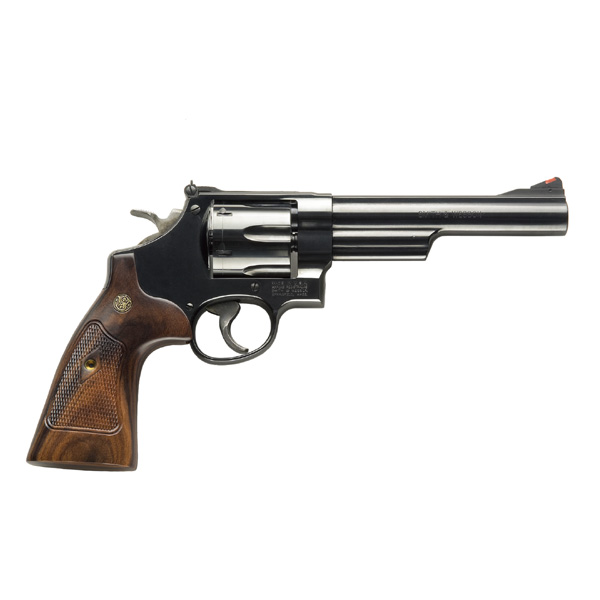 The bread and butter revolver for the .41 Magnum and for Smith & Wesson was to be the Military and Police Model 58. 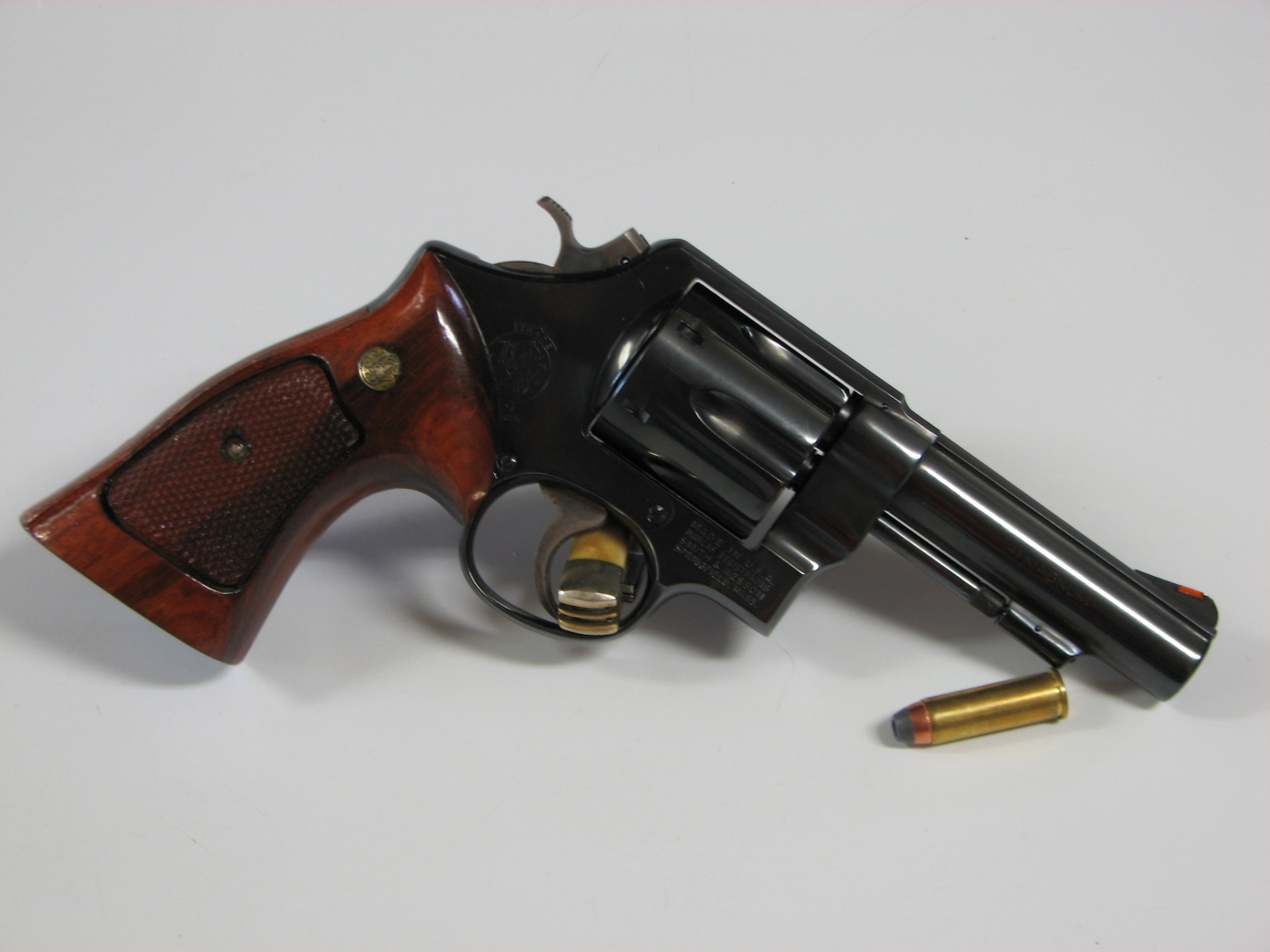 The Smith & Wesson Model 58 was the Military and Police model in .41 Remington Magnum. (Picture courtesy Smith and Wesson Forums).

In the original Elmer Keith, Skeeter Skelton, Bill Jordan plan there were to be two loadings provided for the .41 Remington Magnum; a lower powered general use police cartridge loaded with a 200 grain Keith style semi-wadcutter bullet at 900fps, and a 210 grain Jacketed Hollow Point (JHP) magnum load at around 1400fps, the magnum loading being one that is heading into .44 Remington Magnum territory. Remington decided to boost up the power of the milder police loading with a 210 grain semi-wadcutter bullet at the increased velocity of 1150fps. At that power level the recoil and muzzle blast were simply too much for most officers to countenance and police departments lost interest pretty quickly despite the advertising. It would take a few decades of experience for the .41 caliber and the .40 caliber to re-emerge as viable police cartridges and they would re-emerge at the lower velocity in automatic pistols, these being the .40 Smith & Wesson and the less successful 10mm. So instead of going from the .357 Magnum to the .41 Magnum the move has been from the 9mm Parabellum to the 40 S&W.

The other issue for the .41 Remington Magnum was the use of the full size Smith & Wesson N frame as used in the .44 Remington Magnum revolvers. It’s a big heavy revolver, especially when compared with an L frame .357 Magnum. However the .357 Magnum “Highway Patrolman” like the 38/44 “Heavy Duty” before it were both also built on the larger N frame. Looking at the amount of gear a typical police officer carries on their belt nowadays I can’t see that the weight difference between an L frame and an N frame would make any significant difference, but for some it no doubt did. General George Patton often carried an N Frame Smith & Wesson and seemed quite happy to do so. 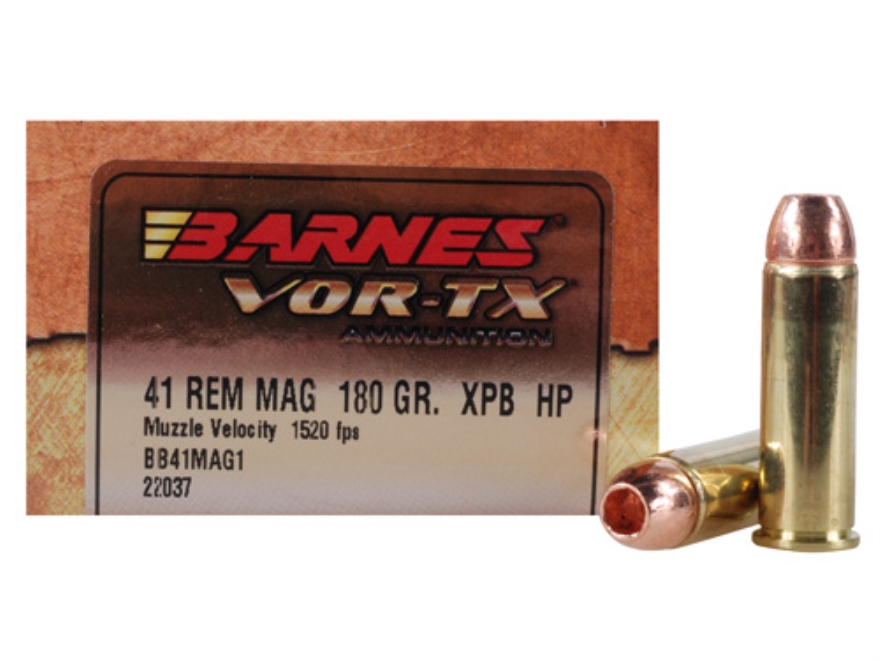 Barnes VOR-TX ammunition is one of the many options for .41 Remington Magnum owners. (Picture courtesy midwayusa.com).

Thus it was that the .41 Remington Magnum became the wallflower sandwiched between the .357  and .44 Magnums and the movie “Dirty Harry” didn’t help its situation. “Dirty Harry” propelled the Smith & Wesson Model 29 into stardom and it took years for Smith & Wesson to fill the back orders for .44 Magnum revolvers after Clint Eastwood immortalized it. But that doesn’t stop the .41 Magnum being the fantastic cartridge it is. Recoil is noticeably less than a .44 Magnum yet the power can be right up there so that this is a cartridge that will handle most anything that walks, crawls or flies. Because of its lack of popularity bullet selection can be more limited than for the .357 and .44 but we are still spoiled for choice with the .41 Magnum. Load data is plentiful and dies and cases are not hard to come by.

Do you have a revolver or rifle in .41 Magnum sitting in your cupboard or safe gathering dust and rust? Three choices, leave it gathering dust and rust and never discover just how good a cartridge this is, or, send it to us at Revivaler to give it a nice appreciative home, or get it out, dust it off, and spend some time getting to know it. The third option is the one most likely to bring a smile to your face. 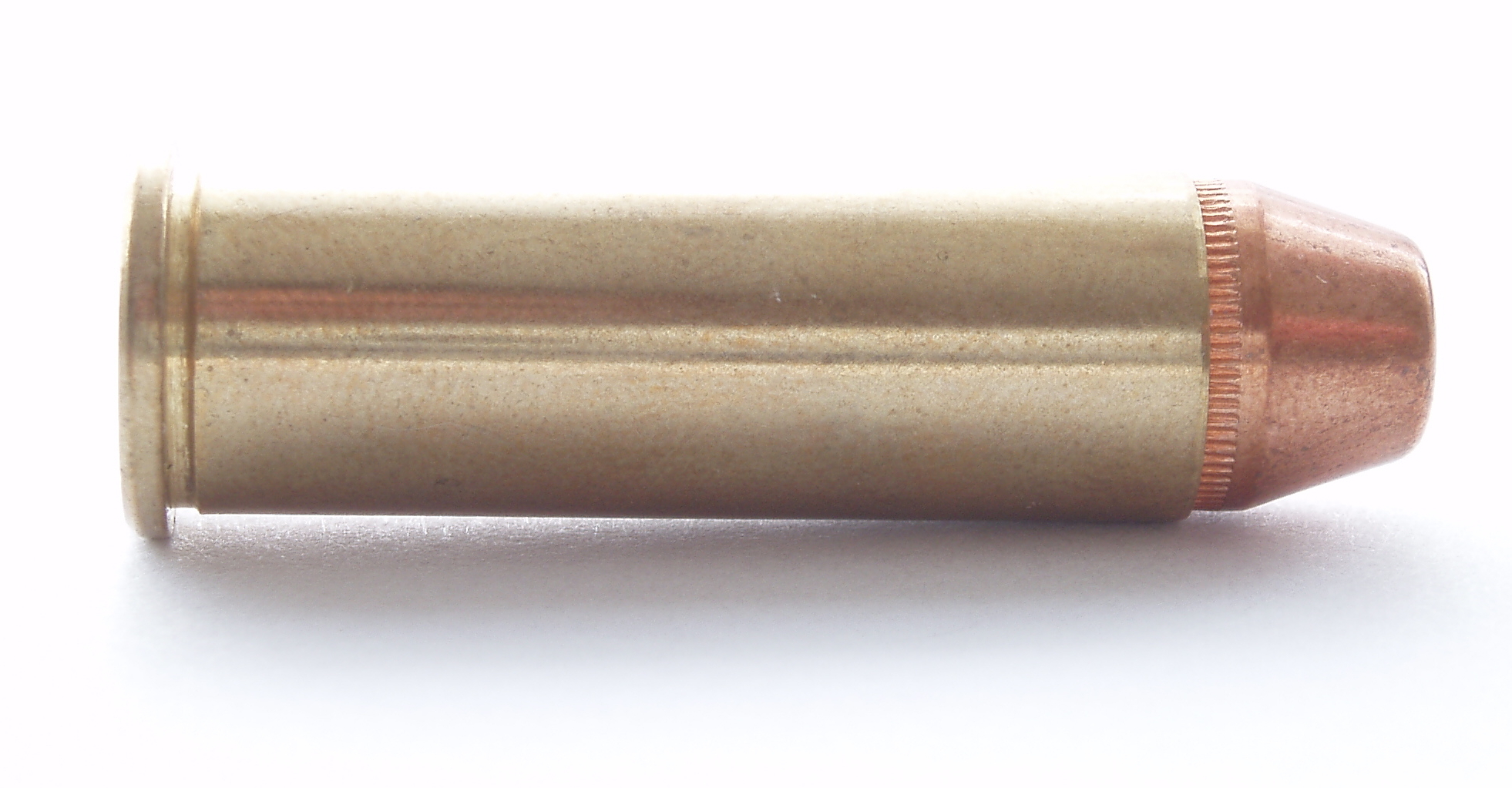 As for handguns and rifles Ruger make their Blackhawk in .41 Remington Magnum, Henry make their “Big Boy Steel” rifle in the caliber also. Marlin no longer do but there will be Marlin 1894 rifles out on the second hand market in the caliber and they will be pre-Remlin rifles worth a look at. 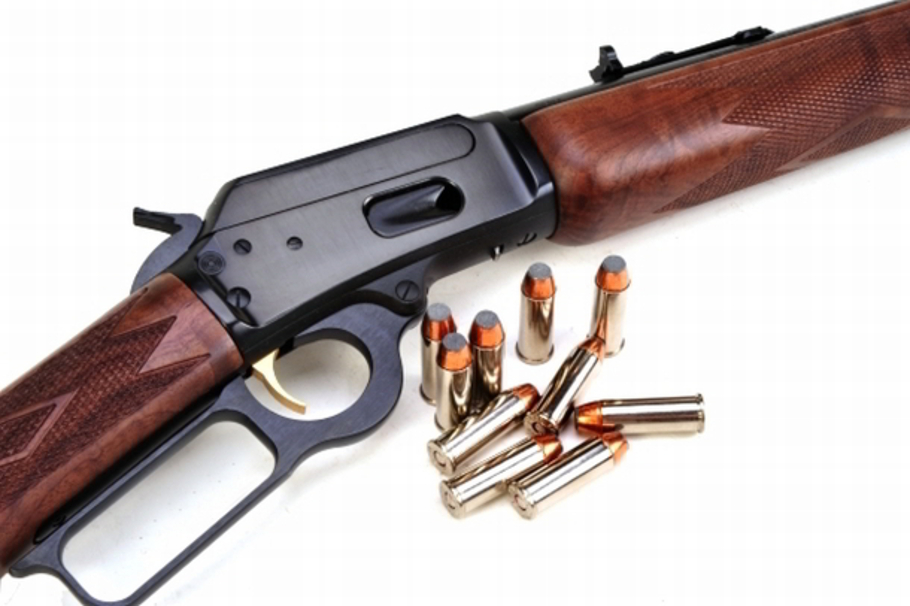 The .41 Remington Magnum has a loyal band of supporters who have discovered just how good this cartridge is. It could be worth your while to do some discovering of your own. Remember, time at the loading bench and the shooting range is never wasted.

Below is a video from hickok45 and his thoughts on the .41 Remington Magnum. Two things to notice in the video; the power level of the cartridge is excellent, and the recoil really looks manageable.

(Feature image at the head of this post courtesy ar15.com).