The Land Rover Series 1 is the post war East Africa safari car. It’s the “Anti-Christ” of the movie “The God’s Must Be Crazy”. This is Britain’s answer to the American Jeep and, in this first iteration, the British actually got it right. 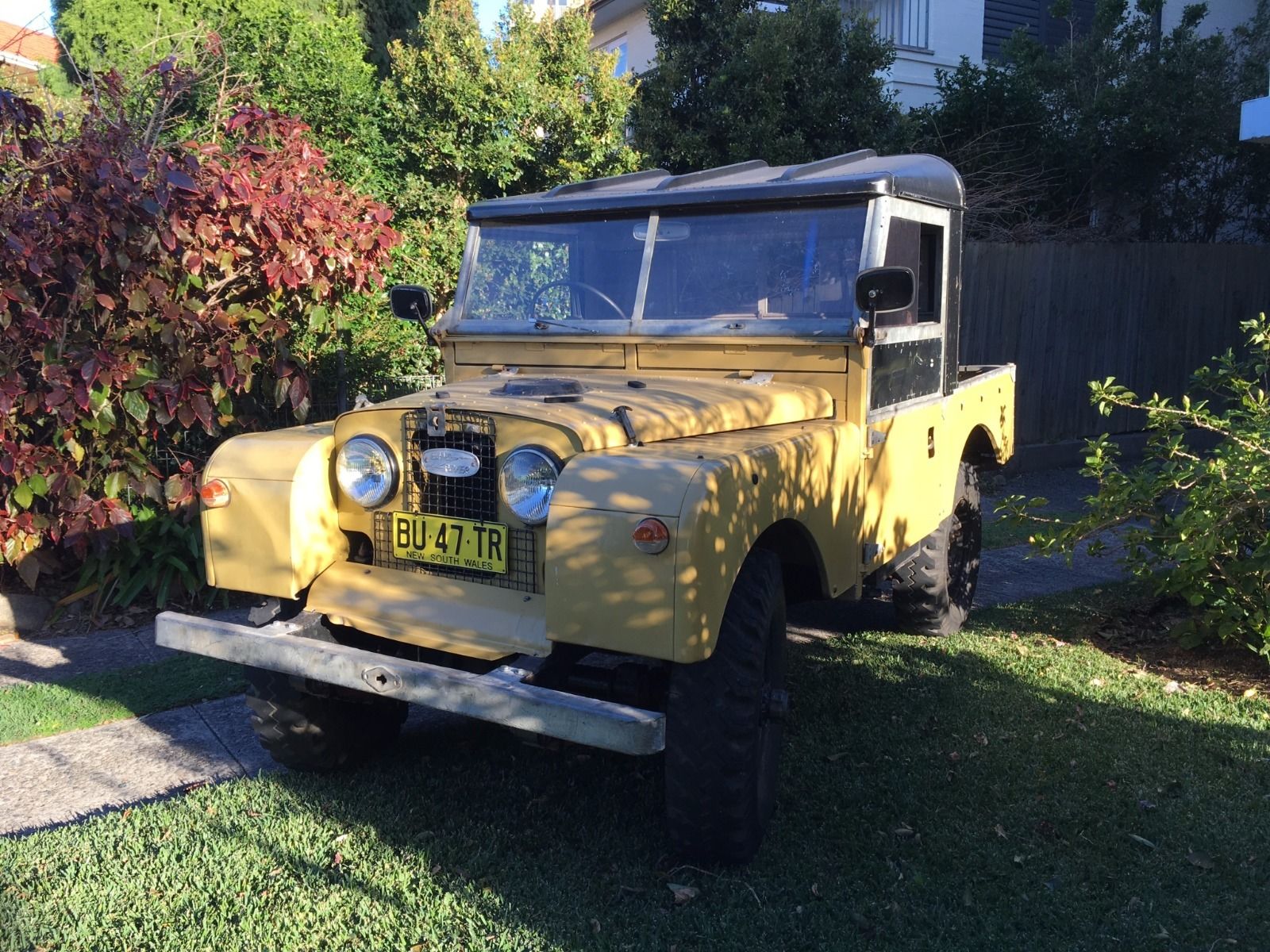 The original Series I Land Rover somehow manages to combine the ruggedness of a utility four wheel drive with an unexpected dose of cute.

The Series I Land Rover was and still is an enormously adaptable vehicle. Keeping the brakes working was one of those challenges that earned the car the “Old Nick name” of “The Anti-Christ” in the movie “The Gods Must Be Crazy”. In my old Series IIA to bleed the brakes you had to raise the front of the vehicle up to an angle of 30°. If you had a winch and a convenient tree then that was an achievable thing to accomplish. If either one of those key ingredients was missing however then you managed without brakes until such times as all the ingredients could be assembled.

The little excerpt below from “The Gods Must Be Crazy” presents a bit of an idea as to why Land Rover Series I’s are said to have so much “personality”. (This video has been edited so some key parts are missing. But you’ll catch the drift. The full length section from the movie is much better. So if you haven’t seen it, get it, you won’t be disappointed).


So if you are looking for a cute British car that can climb trees then you’ve found what you’re looking for. 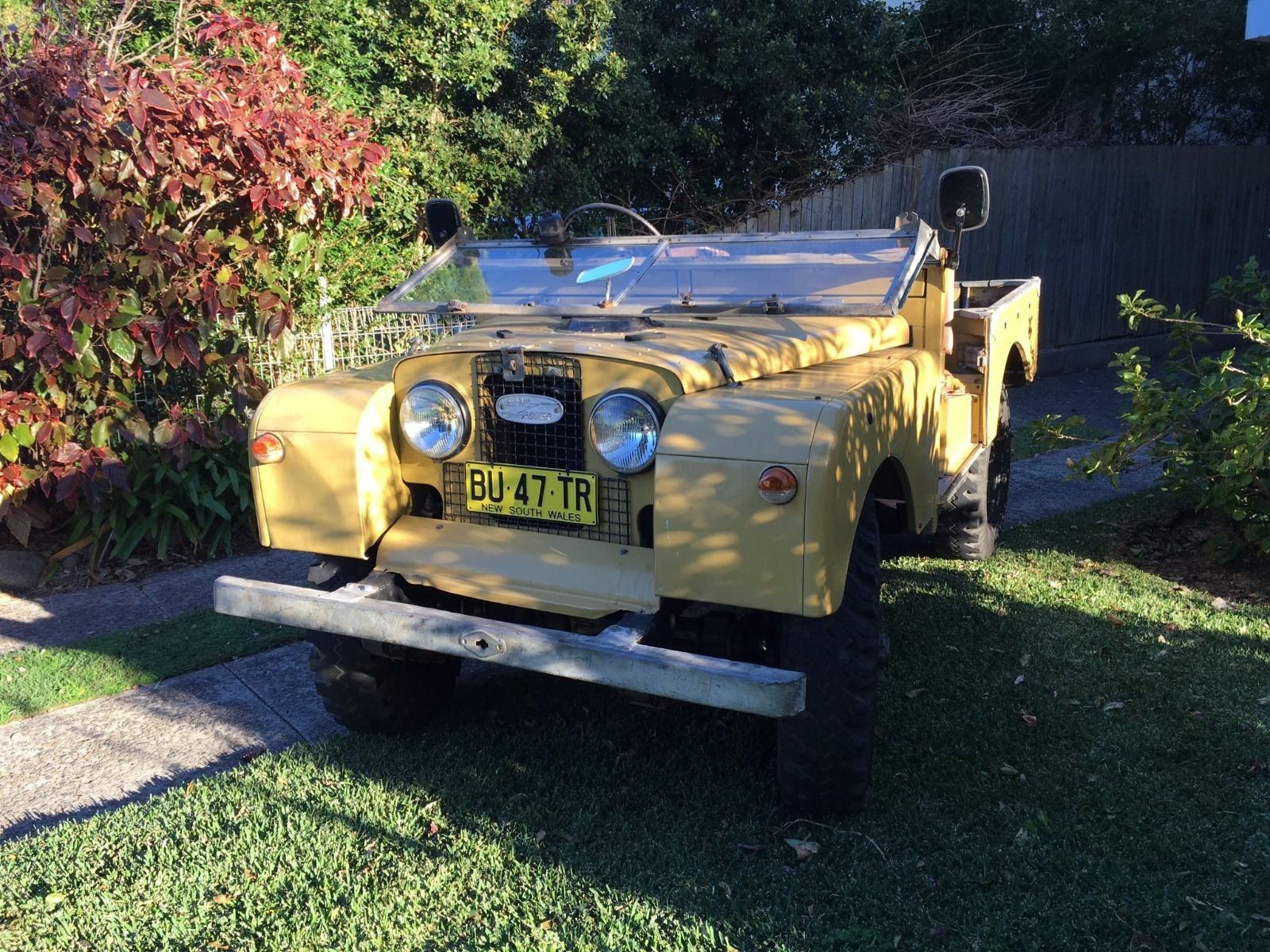 The Series I Land Rover windscreen folds flat, even if you have the spare tire on the hood. This is very handy if you need to draw a bead on old Nyati with the .416 Rigby so you can bring home the buffalo steaks.

The whole idea of the Land Rover began in post Second Word War Britain. American Jeeps had appeared in the country as a part of the American Allied war effort and some found their way into private hands including those of Maurice Wilks who was Rover’s chief designer. He had a Jeep on his farm and thought that a car that was a “British Jeep” complete with a power take off for farm and such like agricultural use would be a great idea. The market for Rover’s luxury cars was just not there in post war “austerity” Britain and in any event Hitler’s Luftwaffe had found the Rover factory during the war and unloaded rather a lot of ordnance on it rendering it unsuitable for luxury car production. But Britain still had an empire (or Commonwealth as it was then called) that took in large chunks of Africa and all of Australia. What would be a perfect vehicle for environments such as the African veldt and the Australian outback? That was the little four wheel drive Maurice Wilks and his team got stuck into creating. A little export earner that even the Americans might adopt. 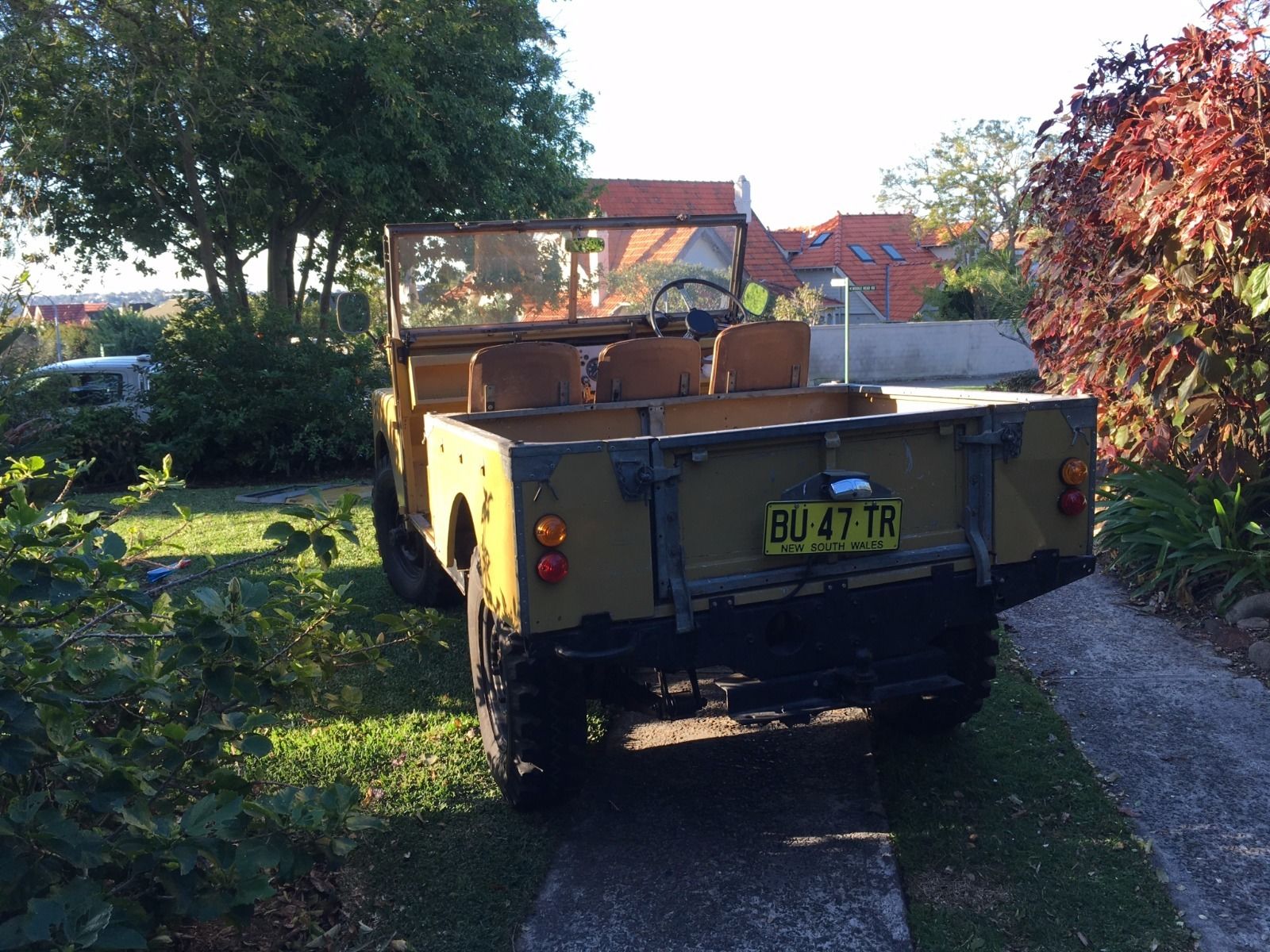 The short wheelbase Land Rover Series I has seating for three people and room in the back for gear and buffalo steaks.

A Rover engineer named Arthur Goddard was put in charge of creating this safari car and he built his first prototype on a Jeep chassis but relocated the steering wheel to the center of the car. In doing this he was decades ahead of McLaren. Steel was in short supply so the body was made of an aluminum and magnesium alloy the British called “Birmabright”. This is the same alloy used for the bodywork of Aston-Martins coincidentally. This helped make the vehicle lighter than it would have been in steel but perhaps not quite as dent resistant if you find yourself being charged by an irate buffalo or rhino as some owners would later discover. 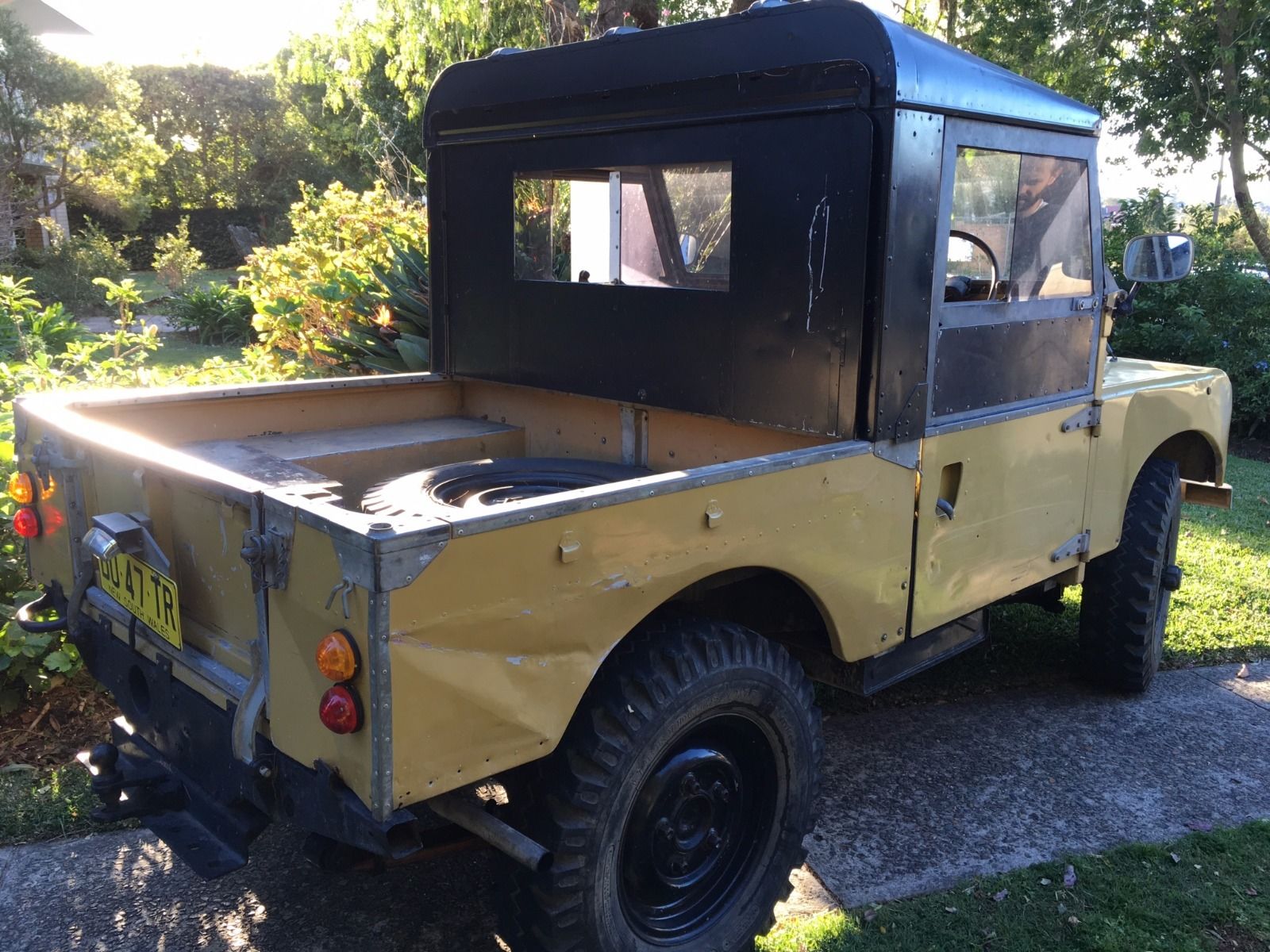 As can be seen in this picture this Land Rover Series I has had a bit of an altercation which the Birmabright was not quite strong enough to withstand.

Fixing dents in Birmabright normally requires heating and annealing the area before panel beating otherwise it can tend to crack.

Paint was also in short supply after the Second World War so initial Land Rovers were painted in whatever military surplus paint that was available. This means they commonly came in “bomber cockpit green” although “battleship gray” was another option.

The car was first introduced at the Amsterdam Motor Show in 1948. Europe needed re-building and Land Rovers were ideal vehicles for that. Rover hadn’t intended to keep the car in production but as it turned out it proved to be such a strong seller that it has remained in production in various stages of refinement up until recently. Equally astonishing is that the vast majority of the Land Rovers made over this time are still in use. The official estimate is around 70% have survived.

The original Series I had a 1.6 liter in-line four cylinder engine. In 1952 the engine was enlarged to 2.0 liters by going to a “Siamese bore” (i.e. no cooling space between the bores). The car in our pictures is a 1954 model. By the time of the 1954 “Landy” the 2.0 liter engine had acquired cooling space between the bores and the wheelbase had been increased from 80″ to 86″ for the short wheelbase and a 107″ for the long wheelbase version. Later in 1956 the short wheelbase was stretched a bit more to 88″ and the long wheelbase to 109″ and they stayed at that until the end of production.

The Land Rover was designed so that you could do any repair work up to and including a full engine overhaul out in the bush and far from a workshop. I’ve certainly done some pulling apart and fixing on these including an engine rear main oil seal whilst out on a camping trip, and getting the cylinder head off for a re-conditioning job. They are one of the easiest cars one could ever work on. On later models it was not necessary to hang the front up in the air to bleed the brake system any more so later models tended to have brakes that worked.

The cute little Land Rover Series I in our pictures is for sale at time of writing on eBay. It is located in Australia but the vendor lists in the “Postage” section that the vehicle “posts” to the United States if desired.

The Land Rover Series I is a car with history and personality. This was the expedition vehicle of the fifties and sixties and it wasn’t ousted from its top spot until the coming of the Toyota Landcruiser J40. Even after that the military still tended to favor them and the Australian Army Perenti was one of the results of that.

The Land Rover is the archtypical African safari car, the archtypical Australian outback car. They have truckloads of personality and, in my experience anyway, are not deserving of the Anti-Christ epithet given in “The Gods Must Be Crazy”. They’re much too cute for that.