Many years ago down in the south of Australia I met a farmer who kept a .458 Winchester Magnum on the farm for kangaroo culling. At the time my rifle for long range kangaroo control way out in the wheat paddock was a 6.5x68mm with 140grain Sierra Spitzer Boat Tail bullets coming out of the muzzle at a crisp 3090fps. It was very reliable on kangaroos and highly resistant to wind deflection. So this farmer’s assertion that nothing less than a .458 Winchester Magnum would be reliable caught me by surprise. I had to think about it a bit to figure out why he held on to this seemingly stubborn notion. I figured it out after a while. In that part of the world at the time the vast majority of shooters were of the opinion that a .22 Long Rifle rim-fire was all you needed for kangaroos. I witnessed a fair few who tried to demonstrate this on a live kangaroo and predictably the results weren’t good and certainly not 100% reliable. The farmer with the .458 Winchester Magnum was determined to ensure he had 100% reliable 100% humane one shot kills, bless him. A .458 Winchester Magnum is a lot more expensive to reload for than a .22lr cartridge is to buy. Making sure the animals didn’t suffer was very important to him. 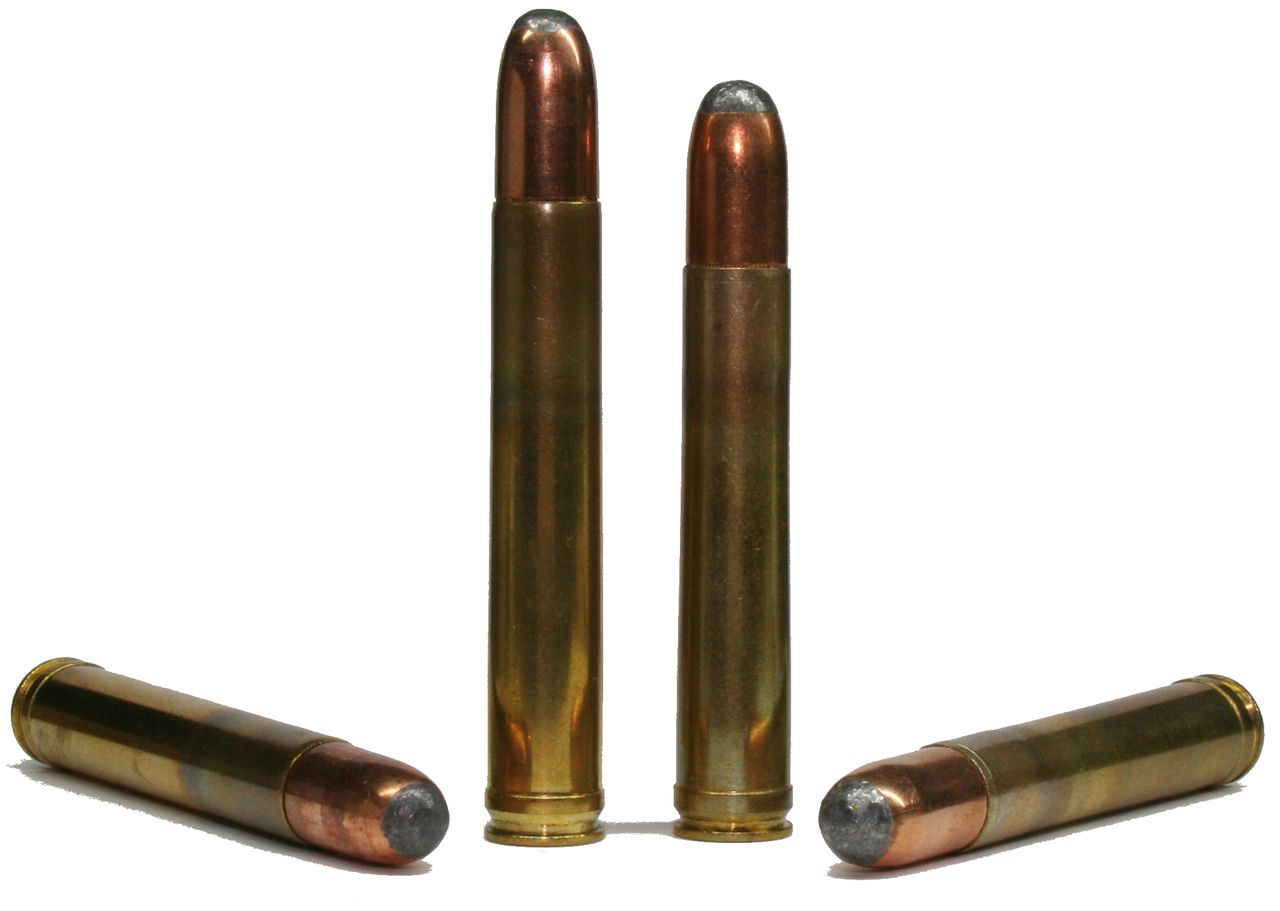 Although thought of as an “Elephant Cartridge” like the .458 Lott (left) the .458 Winchester Magnum (right) is far more flexible than that. (Picture courtesy Wikipedia).

The reason I started this post with the account of the southern Australian farmer with the .458 was to get readers thinking about the multi-use flexibility of the .458 Winchester Magnum, because it is an amazingly flexible cartridge if you are a reloader and can be a perfect choice especially if you live in a country where its affordable to travel and shoot larger game such as buffalo, a country like Australia for example, parts of Europe and most anywhere in Africa. In Australia the .458 Winchester Magnum is one of the best possible calibers for Asian Buffalo, Banteng, and some also load it for use on the large Sambar deer. Appropriately loaded it also works for wild pigs and wild boar. It can be everything from a buffalo to elephant cartridge, and it can also be loaded to do things much like a 45/70. With lighter 300gn bullets muzzle velocities can be up around 2,700fps allowing a 200yard zero to be used. Or the velocity can be brought down to 45/70 levels. Why do so many people simply avoid the .458 Winchester Magnum? I think its likely to be the sort of mindset I had when the farmer told me he used his .458 on kangaroos. My first thought was “He’s joking!” He wasn’t. 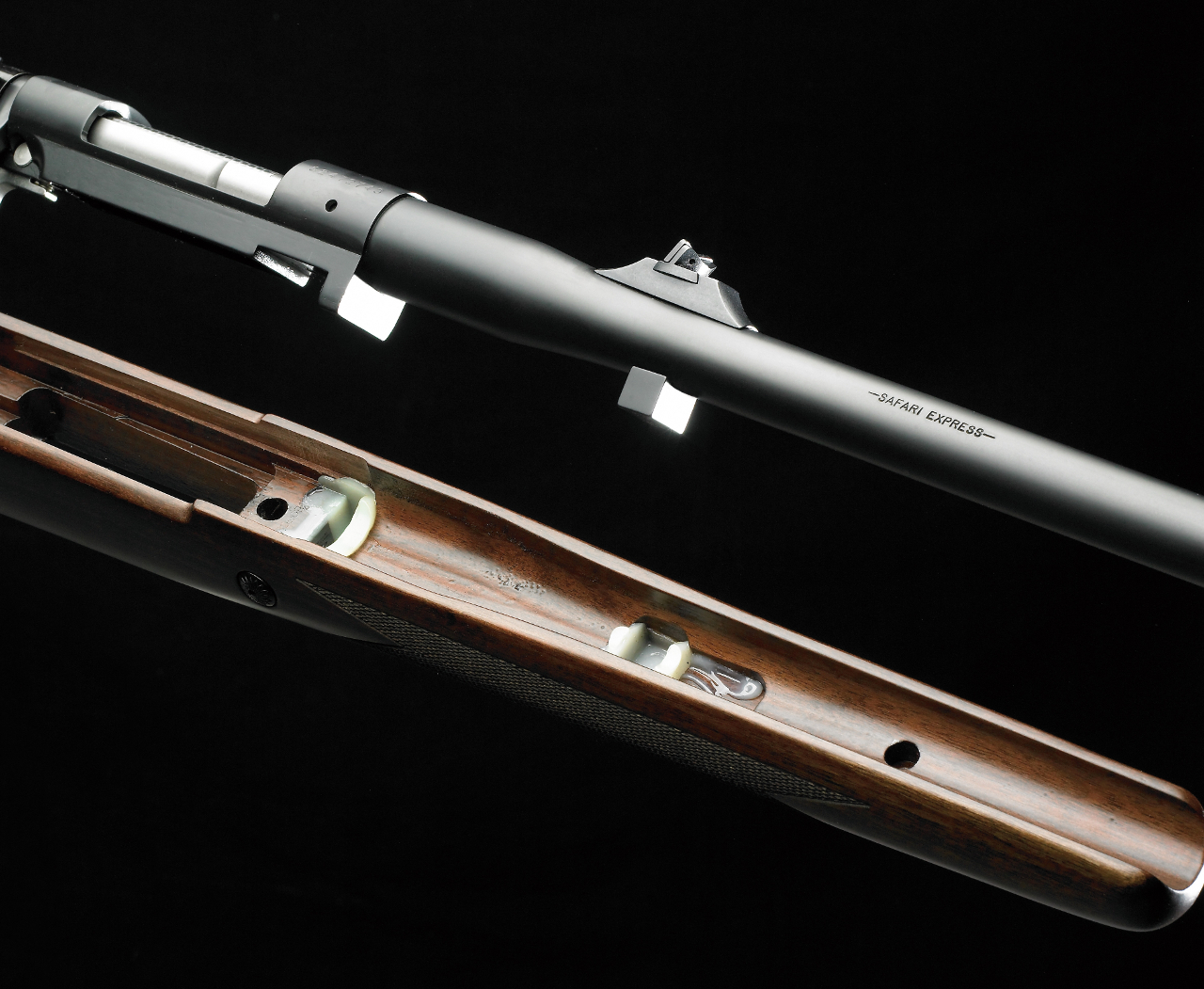 Full power loadings in the .458 Winchester Magnum generate recoil and muzzle blast in the “Ouch” category. Winchester use double recoil lugs on their Model 70 Safari Express rifles to ensure the stock does not get split. If you are going to fit a rifle-scope on your .458 then at least 100mm of eye relief is what you look for and preferably a rubber eyepiece to keep your eyebrows from “magnum eyebrow” affliction. It is a lot of gun in a modest size package and it has a talent for sending your rifle-scope back at your face with near legendary efficiency. A .458 owner I spoke to recently was looking seriously at the very high quality Nickel rifle-scopes from Germany because their Nickel Magnum rifle-scope provides a full 125mm (4.9 inches) of eye relief. The only thing making him stop and think was the price that starts at €2567.00 on up to €3146.00. I’ve owned two Nickel rifle-scopes in the past and they were without doubt worth every Euro they cost.

You will find Nickel rifle-scopes if you click here.

You will find the Nickel Magnum 1.5-6x30mm with the long eye relief if you click here.

So, with full power heavy bullet ammunition such as one would choose for safely foot stalking buffalo or Banteng then your .458 Winchester Magnum is going to generate recoil and muzzle blast in abundant proportions and you will need to do plenty of shooting with it so you can manage it comfortably. Comfortably? Yes, if you do the training you will become comfortable with it. But you can use efficient lighter bullets and your .458 “elephant rifle” will become a far more tame animal to shoot and enjoy.

The Winchester Model 70 Safari Grade is an affordable and excellent rifle available in .458 Winchester Magnum as well as 416 Remington Magnum and .375 Holland and Holland. (Picture courtesy winchesterguns.com).

The .458 Winchester Magnum was the first of the line up of Winchester Magnums that came to include the .264 Winchester Magnum, 300 Winchester Magnum and .338 Winchester Magnum. It first appeared in 1956 chambered in Winchester’s Model 70 back in its “pre-64″ days. (The current Model 70 is, in my opinion at least, at least the equal of or better than the pre-64. My own Model 70 Super Grade in .300 Winchester Magnum has the controlled feed action and the addition of the bolt guide rail only makes that smooth action even smoother.) Back in 1956 Winchester’s .458 was almost certainly ahead of its time. Powder technology simply hadn’t caught up with the idea of using such a comparatively small capacity cartridge case to propel a 500grain bullet at 2150fps. Rifle makers in the United States seem to have been of the opinion that a 22″ barrel would make for a very handy dangerous game rifle for use in thick cover. Over in Europe on the other hand makers such as J.P. Sauer, Steyr and Mauser were fitting 65cm (25⅝”) barrels which had more chance of getting close to the advertised muzzle velocity for the cartridge, often with the option for a 60cm (23½”) barrel. Muzzle velocities for the early factory loadings were disappointing and there were instances in which the ammunition failed in sometimes spectacular fashion creating dangers that one just doesn’t need if the game one is hunting provides all the danger that one can cope with. The problems have been progressively dealt with however and without doubt the modern propellant powders available are very much capable of producing the full velocities the cartridge was designed for and also to provide propellant powders that have an amazingly high degree of temperature insensitivity. Amongst the best of these are the powders coming from ADI in Australia and imported into the United States under the Hodgdon brand. 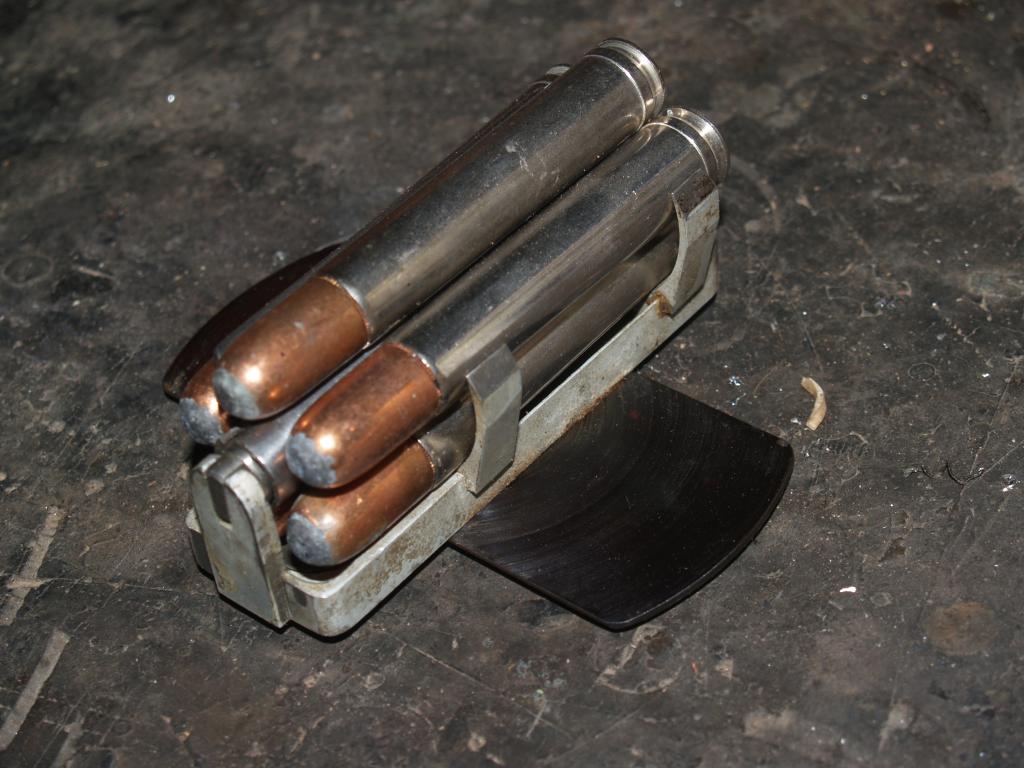 With these new propellant powders the .458 Winchester Magnum has truly come into its own wherever dangerous big game is to be hunted. It is nowadays regarded as one of the best choices for an African Safari. But it is much more than that. Hodgdon’s on-line reloading data for the .458 Winchester Magnum is well worth examining to get a picture of what an amazingly flexible cartridge this has become simply because of the new powder technology and the fantastic range of bullets now available in .458 caliber. 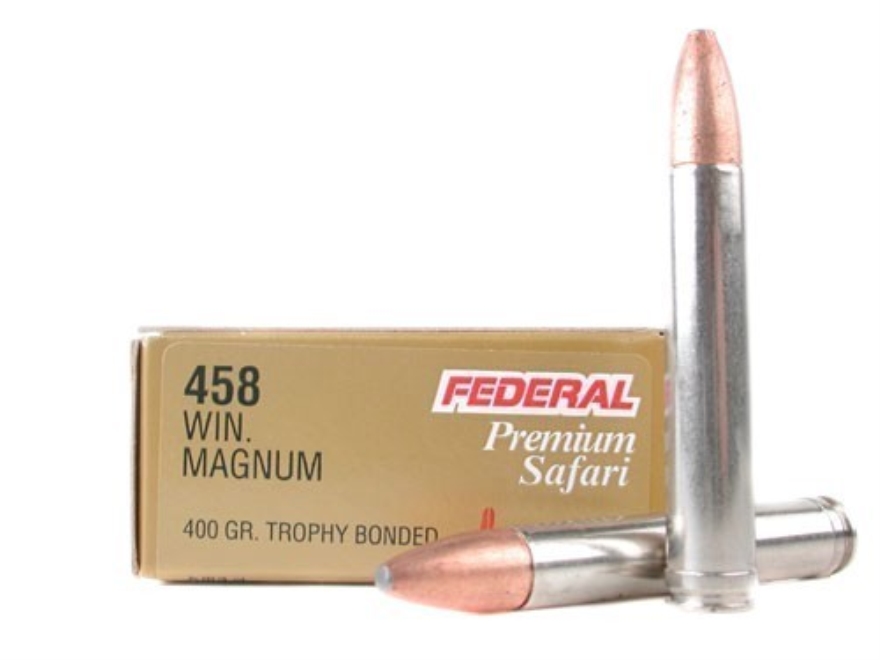 If the shooter does not reload then the choices in .458 Winchester Magnum ammunition are quite limited. (PIcture courtesy midwayusa.com).

So, if a shooter does not reload then the choices available in factory ammunition for the .458 Winchester Magnum are quite limited. However for the reloader this cartridge offers the ability to go from African Safari loadings down to deer and boar.

To see the Hodgdon reloading data for the .458 Winchester Magnum click here.

For readers in Australia and New Zealand to see the ADI reloading data for the .458 Winchester Magnum click here.

Looking through the Hodgdon or ADI data begin with the lighter bullets such as the Barnes 250gnFP at around 2800fps, Barnes 300grain TSX and TTSX which the .458 Winchester Magnum can drive at velocities in the order of 2700fps, the 350gn Speer at velocities up to about 2500fps, the 400gn Swift A Frame at around 2300fps (i.e. the same bullet weight and velocity as the standard load for the  .416 Rigby), the 450gn Swift at 2200fps, and the 500gn Hornady at over 2100fps. The lighter bullet loadings being suitable for deer, (or kangaroos), the mid weight bullets suitable for larger deer such as Sambar or elk, and the 450gn and 500gn bullets perfect for your buffalo or other dangerous game excursions.

The .458 Winchester Magnum is a cartridge that has long been locked up in the “African Safari” box in people’s thinking. Its a lot more than that, and far more capable than just that. Its a cartridge that needs to be re-discovered. 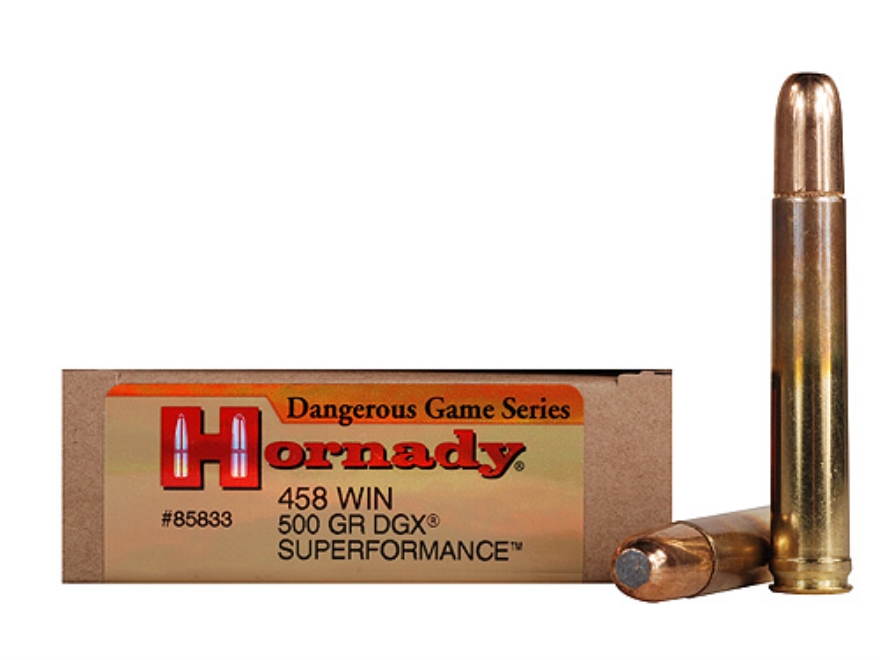 Hornady’s new Superformance ammunition is able to deliver all the ballistics the .458 Winchester Magnum was created to deliver. (Picture courtesy midwayusa.com).

(Feature image at the head of this post courtesy Wikipedia).