Sometimes it takes a dramatic wake-up call for people to take action on a problem, and the Heckler & Koch P7 pistol was created as a result of one of the most world changing terrorist attacks of the twentieth century: the Palestinian “Black September” group taking hostage eleven members of the Israeli Olympic Team for the 1972 Munich Games. In breaking the hostage stalemate the German police discovered that they were inadequately trained and ill equipped to deal with terrorists who were well armed, highly trained, and suicidally committed. The end result was the death of all the Israeli hostages, five of the eight terrorists, and a police officer.  This led to the creation of the GSG 9 elite Police Tactical Unit and the process of equipping police with the best equipment, including pistols, possible.

The standard German police pistol had been the Walther PP, the slightly larger sibling of James Bond’s Walther PPK. This pistol was chambered for the .32ACP, a cartridge which, despite James Bond being told it packed excellent stopping power, didn’t. For their new police pistol the German Police decided to move up to the NATO standard military pistol cartridge, the 9mm Parabellum. Not only was a change of caliber mandated but also a completely new pistol designed from the ground up with police oriented tactical purpose. 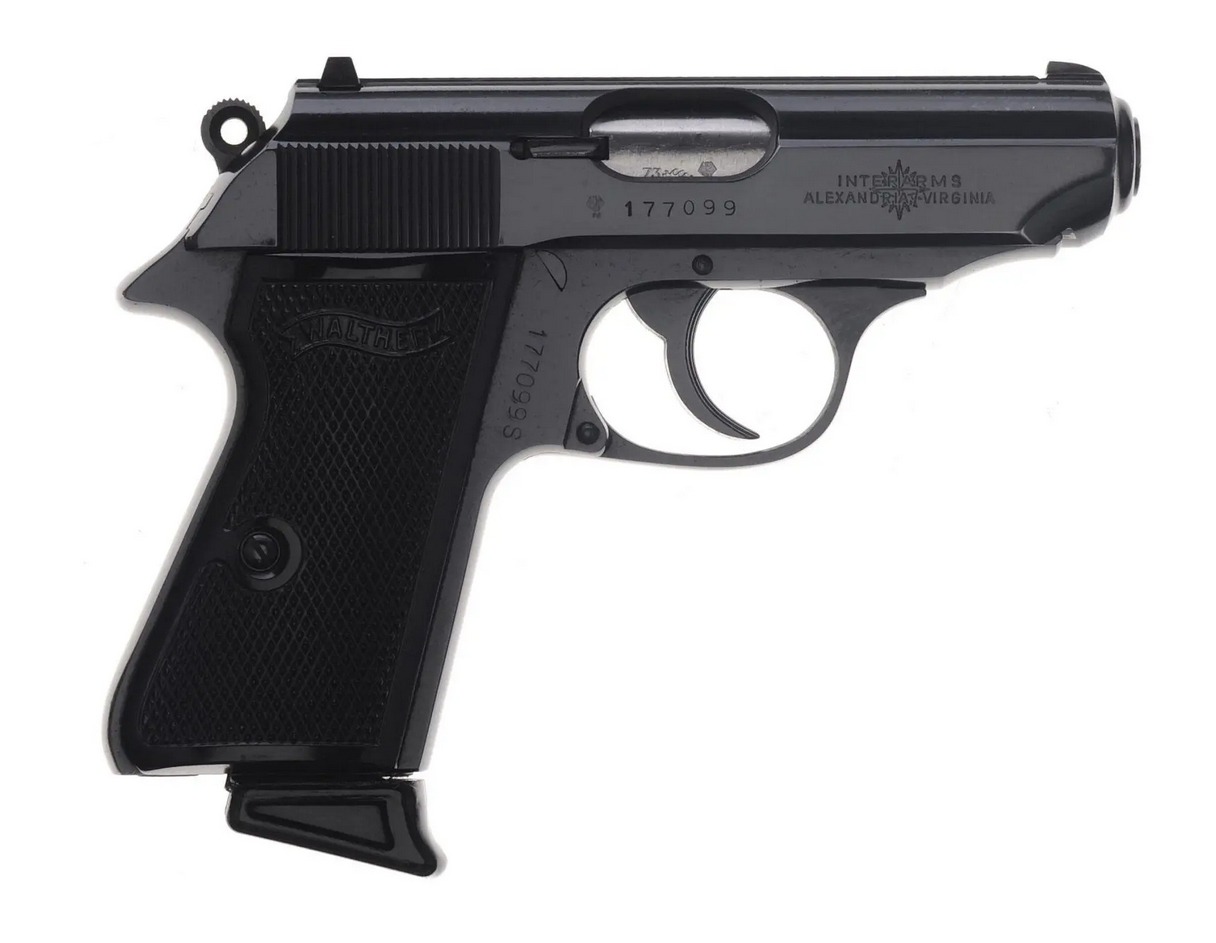 (Note: you will find the above pistol for sale by Rock Island auction if you click here).

The new pistol was to weigh no more than 1000 grams (35 ounces), have external dimensions not exceeding 180 × 130 × 34 mm (7.1 x 5.12 x 1,34 inches). This new pistol was to be made safe to be carried fully loaded with a cartridge in the chamber whether in a holster or loose in a pocket and had to be able to be drawn and fired instantly and instinctively. It was also to be fully ambidextrous so it could be used with equal efficiency with either hand.

Three manufacturer’s new handguns were chosen by the German police; the SIG Sauer P225, the Walther P5, and the Heckler & Koch P7. Of the three the Heckler & Koch P7 was the handgun that arguably best fitted the design criteria, it was one of the best designed and made defensive handguns ever created.

Past Design Legacy: the Schwarzlose Model 1908

In creating their new police pistol Heckler & Koch’s engineers looked at past designs for inspiration and among the inventory of pistols of the past was the German Schwarzlose Model 1908. The Schwarzlose M1908 was an unusual pistol that utilized a blow-forward action, which many reviews focus on, but it also featured a safety catch mounted on the front of the grip. 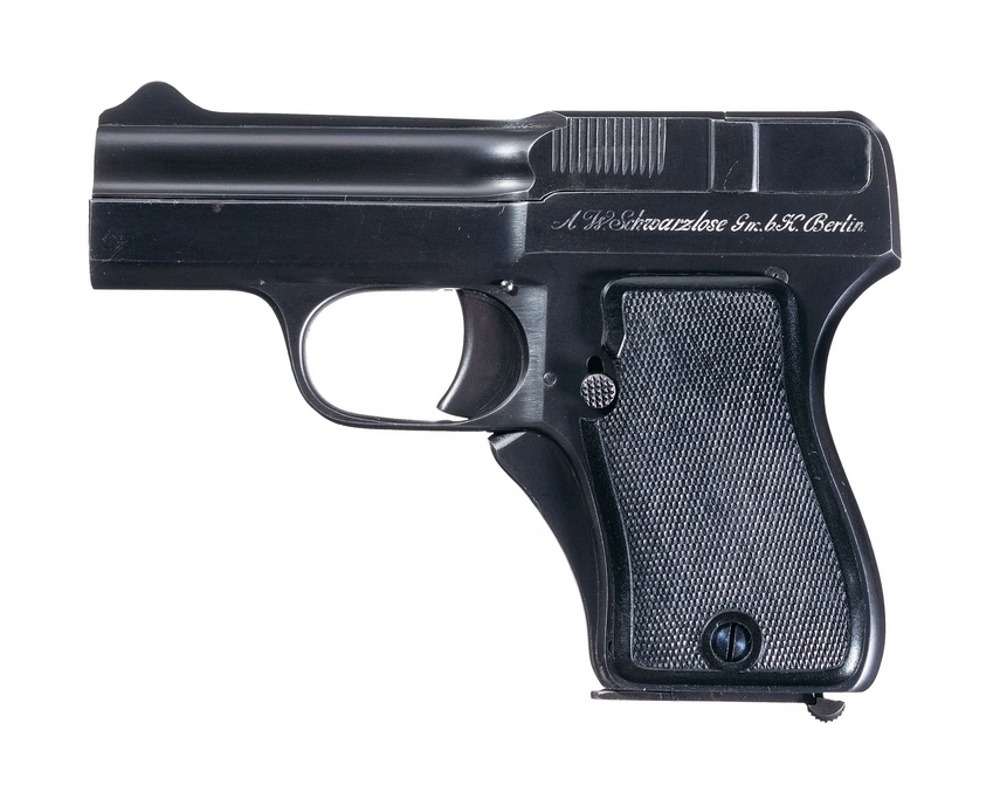 The Schwarzlose M1908 pistol was created as a pocket pistol, and so the idea behind the front mounted grip safety catch was to ensure the pistol could be safely carried in a pocket but brought into action quickly using only one hand. Heckler & Koch’s engineers did not want to have a cocked and locked pistol sitting in the potentially hazardous environment of a pocket, but understood that a front mounted lever could be used to cock a pistol’s striker mechanism efficiently and quickly, using only one hand: an uncocked pistol would be safe to carry in a pocket, thus the “squeeze cock” mechanism was born. 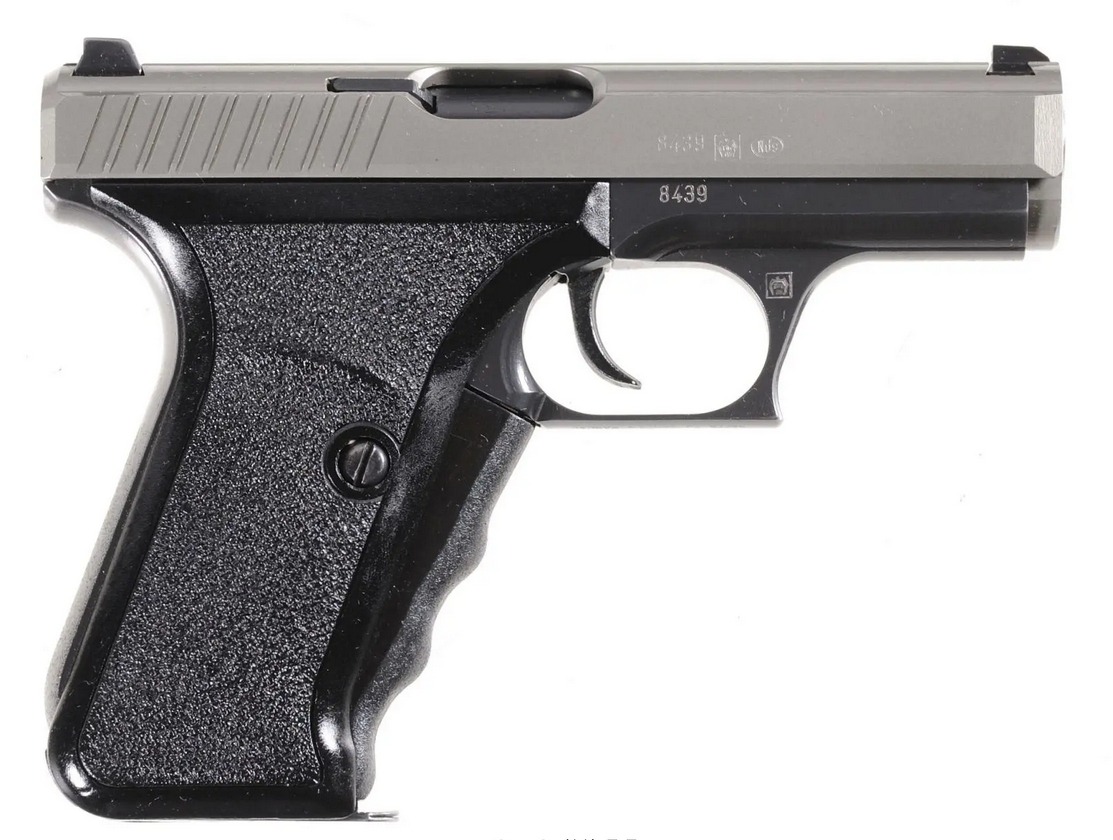 The Heckler & Koch P7 pistol is designed with a front mounted “squeeze cock” mechanism so the pistol can be safely carried in a pocket with a cartridge in the chamber.

It was important that the squeeze cocking mechanism not be too stiff to operate, but that it be resistant to being accidentally activated. To this end Heckler & Koch made the initial pressure required to cock the pistol in the order of 12-15 lb. But once the pistol was cocked this reduced to 2 lb. so there would be no fatigue caused by the shooter having to maintain such a tight grip on the handgun. There were two other advantages to the squeeze cock system; if the pistol was dropped it would immediately de-cock itself rendering it safe, and if a cartridge failed to fire the shooter could choose to simply release the squeeze cock grip, and then squeeze it again thus re-cocking the pistol, and attempt to fire again (One could of course also eject the failed cartridge and reload as is done on other pistols).

The safety system was not the only new and unique feature of the Heckler & Koch P7 however. Despite being chambered for the 9x19mm Parabellum cartridge the P7 used a gas operated delayed blowback system to cycle the action. 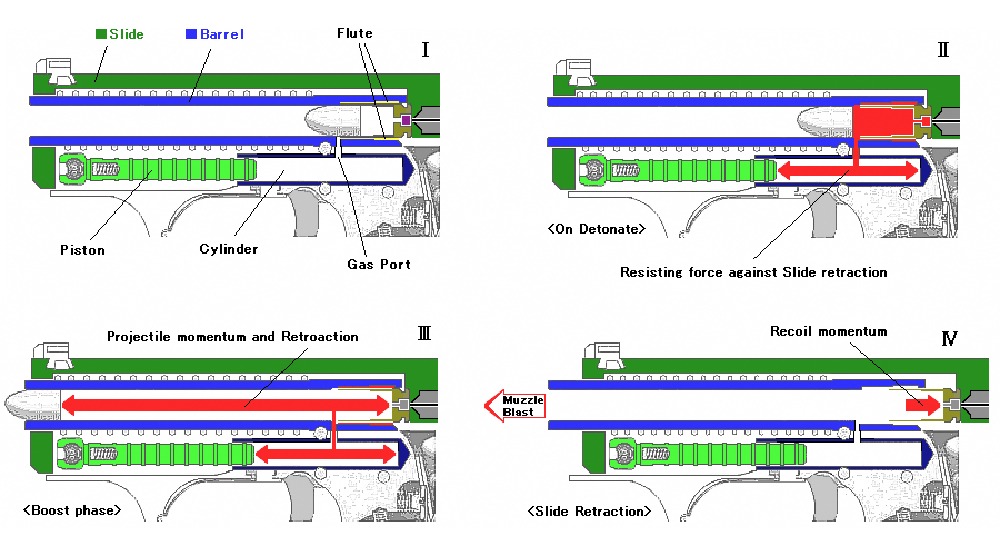 The Heckler & Koch gas operated delayed blowback system features a gas bleed hole located in the chamber so that as the cartridge is fired and the bullet begins its journey down the barrel high pressure has is bled into a gas chamber that forces the action to remain closed. As the bullet exits the barrel the pressure drops releasing the lock on the slide and allowing it to recoil, ejecting the fired case, the recoil spring then forces the slide to close whilst stripping a fresh cartridge from the magazine and chambering it ready for the next shot.

Using this system there was no need for the barrel to move at all but permitted it to be fixed to the frame, thus making the P7 a surprisingly accurate pistol. Having the barrel fixed and using a blowback action can significantly improve accuracy, which is why this was also done on the M1911 Colt Gold Cup .38 Special Mid-Range target pistols.

The P7 had a fluted chamber to ensure the cartridge case did not stick to the chamber walls and this led to the singular downside to the gas operated delayed blowback system: which was that it caused the pistol to heat up if a lot of shooting was being done: by the time fifty rounds had been fired the handgun would get uncomfortably warm. Because the P7 was made as a defensive pistol, and it would be unlikely for a user to be carrying more than fifty rounds, this may have been considered acceptable. However, in military usage rather more than fifty rounds are likely to be used. Heckler & Koch later modified the design to include a heat shield above the trigger guard.

There are other interesting features of the P7: it used Heckler & Koch’s polygonal rifling in its barrel and the slide did not require guide rails, with the frame top and barrel providing that function. The box magazine held eight rounds so with a cartridge in the chamber the pistol capacity was nine rounds.

Heckler & Koch advertised the P7 as “the most expensive pistol in the world” seemingly assured that when it comes to a handgun on which your life may depend then people would be willing to spend the extra money for the advantages it offered. 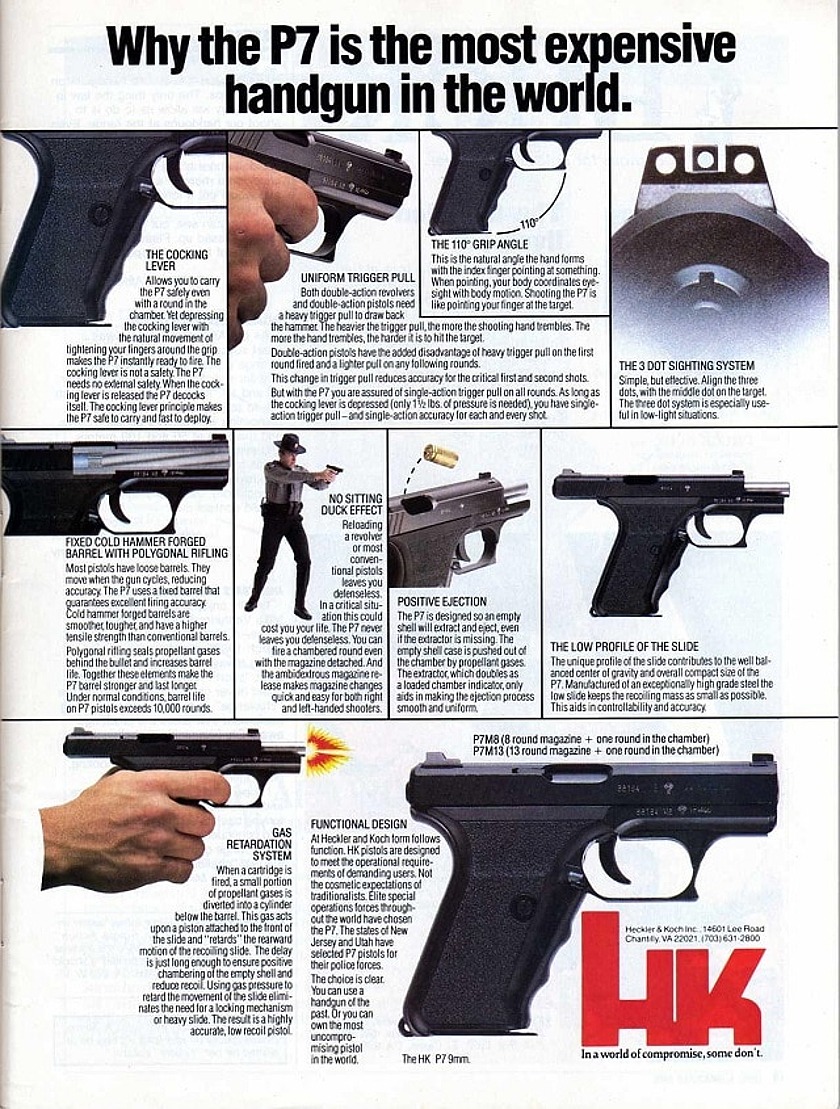 There is little doubt that the Heckler & Koch P7, and its later high capacity sibling the P13, certainly offered a host of desirable features in a pistol one could in truth depend on for one’s life.

The Heckler & Koch P7 was made in a few models up until production ceased in 2008. The two most common are the P7 with a single stack eight round magazine, and the P7M13 fitted with a double-stack thirteen round magazine. Early models featured a European style magazine release on the grip heel. This was later changed to ambidextrous buttons on the sides.

There were other variations: the P7M8 featured a larger trigger guard with heat shield, longer trigger, thumb operated magazine release, and lanyard ring. The P7K3 was a shortened version using a hydraulic recoil buffer and was able to be adapted to other cartridges; the .380ACP, 32ACP, and also .22lr rimfire using substitute parts on the original frame. The hydraulic recoil buffer was prone to wear and replacement parts are no longer available. The P7M10 was a version chambered for the .40 S&W cartridge, and a prototype P7M7 was made for the .45ACP but did not make it into production.

The Heckler & Koch P7 was advertised as “the most expensive pistol in the world” and despite being out of production the value of second hand examples in good condition continues to be high, and increasingly so. As an example there is a P7 coming up for sale by Rock Island Auction on March 28th, 2019 and it is expected to sell for around USD$1,400 – $2.250: that being said it could well fetch more than that.

You will find the sale page for that pistol if you click here.

The condition of this pistol is described by Rock Island Auction as follows:- 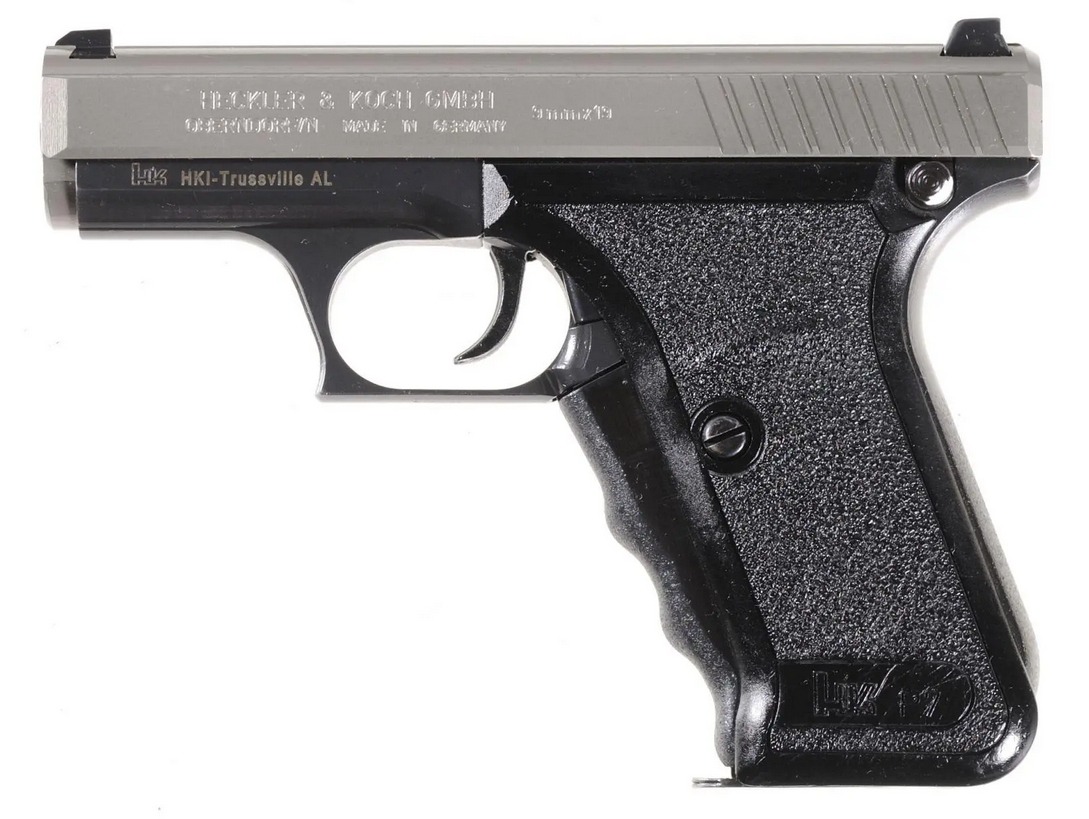 The Heckler & Koch P7 pistol coming up for sale by Rock Island Auction.

While perhaps not the most ideal pistol for target shooting the Heckler & Koch P7 stands out as one of the greatest defensive and police pistols ever created. The squeeze cocking system provided some unexpected advantages including the fact that it tends to ensure that the shooter does not shift their grip on the pistol during magazine changes so the shooter’s grip stays consistent. It was once described not only as the “world’s most expensive pistol”, but also as the “world’s safest pistol”. It is without doubt one of the safest handguns ever created on all points of safety. When people think “safety” they often only think in terms of the pistol being designed to prevent an accidental or negligent discharge, and the P7 provides that. But to be really “safe” a handgun must be able to be brought into action instinctively, operate with absolute reliability, and enable the shooter to accurately hit what needs to be hit. The Heckler & Koch P7 delivered exemplary performance in all these areas.