The Black Prince and its not quite twin sibling the Black Knight were Phil Vincent’s last efforts to create a motorcycle that would save his financially ailing company and bring it into prosperity even as Britain was moving out of austerity and towards prosperity.

The Vincent Black Prince was mostly a Vincent Black Shadow with a modified frame and fitted with svelte fiberglass streamlined fairing over the bodywork. Phil Vincent had always been at the forefront of motorcycle design as can be partly seen when we realize that the Japanese did not create a production road motorcycle that was actually faster than a Vincent Black Shadow until the appearance of the Kawasaki Z1, more than two decades later. But being a designer who is so far ahead of everyone else that you’re lonely is not a guarantee of success, quite the reverse, as Phil Vincent discovered.

The Vincent Black Prince was conceived as a motorcycle for the gentleman rider. It was intended to appeal to people who could afford a sports car and/or an exotic sports motorcycle. In creating the Black Prince Phil Vincent was attempting to attract respectable professionals who simply loved to ride motorcycles. That being said I’m tempted to think that there was another market that Phil Vincent created the Black Prince and the slightly cheaper Black Knight for; the police. The Black Knight in particular looks like the specifications that police departments might just go for, not only in Britain but also in the United States. Phil Vincent had worked with Indian in the United States after the war and had created two prototype motorcycles for them, one based on an Indian Chief with a Vincent 998cc engine (the bike known as the “Vindian”), and the other an Americanized Vincent Rapide that would have lent itself to joint manufacturing between Vincent and Indian. Although Indian ceased operation in 1953 my guess is that Phil Vincent, perhaps in liaison with the same Mr. Brockhouse who acted as the go-between in the “Vindian” project, might have been hoping to sell these super motorcycles to American police forces. A Vincent Black Prince or Black Knight is a far better handling and rather quicker motorcycle than a fifties vintage Harley-Davidson.

The Vincent Black Prince was first shown at the Earls Court Show of 1954. It got a reaction a bit similar to people’s reaction to the Citroën DS series of the same era; people either loved it or hated it. So the styling of the bike immediately divided the buying public opinion despite the reviews of the bike being very positive. Phil Vincent had designed the most practical road motorcycle his imaginative mind could invent. He had created a bike that you could ride all day comfortably, and ride in all weathers with a tad more comfort than most other motorcycles. Perhaps this is why it looked so much like a police motorcycle, because police officers are likely to be on their machines come rain, hail, sleet or snow, all day every working day.

In creating the Black Prince and Black Knight Phil Vincent did not simply install a fiberglass fairing on a Black Shadow or Rapide. Instead he re-designed the frame eliminating the fabricated steel backbone that also formed the oil tank and replaced it with a simple tube (This was actually not as strong as the original). With the use of a simple tube frame an oil tank became necessary and one was fitted under the seat. The original Vincent style rear suspension was improved with a single coil spring and hydraulic shock absorber unit that increased rear suspension travel to a generous seven inches. The electrical systems of the bike were no longer made by Miller but by Lucas and included a 60 Watt dynamo with ignition now by distributor and coil. The engine was fitted with Amal monobloc carburettors which helped improve fuel consumption and improved starting. A lever was fitted at the left side of the bike to operate the center stand which was a design feature that was generally much liked.

Top speed of the Black Prince was slightly slower than that of the Black Shadow without doubt because of drag set up by the front windscreen. Top speed was a little north of 110mph and the bikes road manners were impeccable.

The Vincent Black Prince in our pictures is an original example that is coming up for auction by Mecum Auctions at their Las Vegas auction to be held between 25th-28th January 2017.

You will find the sale page for this original Vincent Black Prince from the Jack ‘The Bear’ Coonrod Collection if you click here. 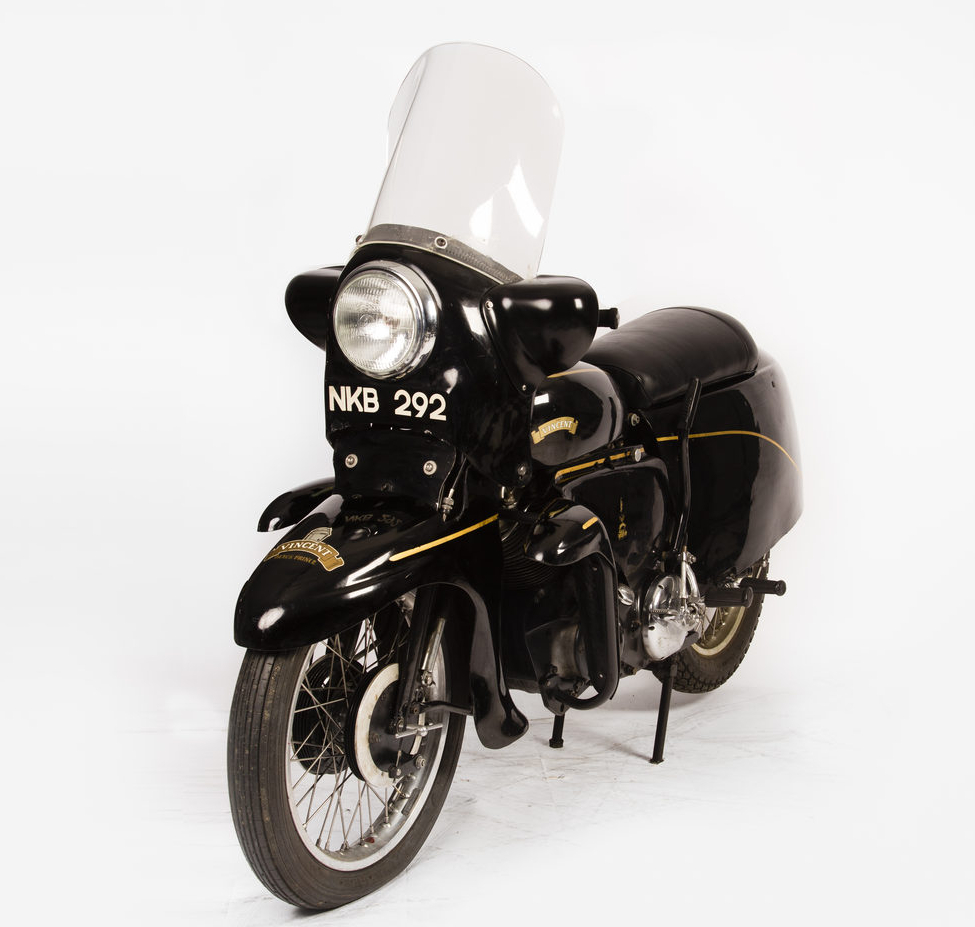 (All pictures courtesy Mecum Auctions except where otherwise marked).

The Gun and Its Development by W.W. Greener