As many of you will be aware, in Ian Fleming’s books Casino Royale and Moonraker, James Bond drives a thirties 4½ liter Bentley “Blower” (the blower being the Amherst Villiers supercharger). This car is written off during a car chase in Moonraker and is replaced by a 1953 Mark VI Bentley R-Type, which he does not like quite so much. What could have been done to make the ’53 Bentley R-Type a car that Bond might prefer over his old “Blower” Bentley? British Company Bensport seem to have hit upon the answer with their creation of the “Everything old is new again” Bentley R-Type La Sarthe. 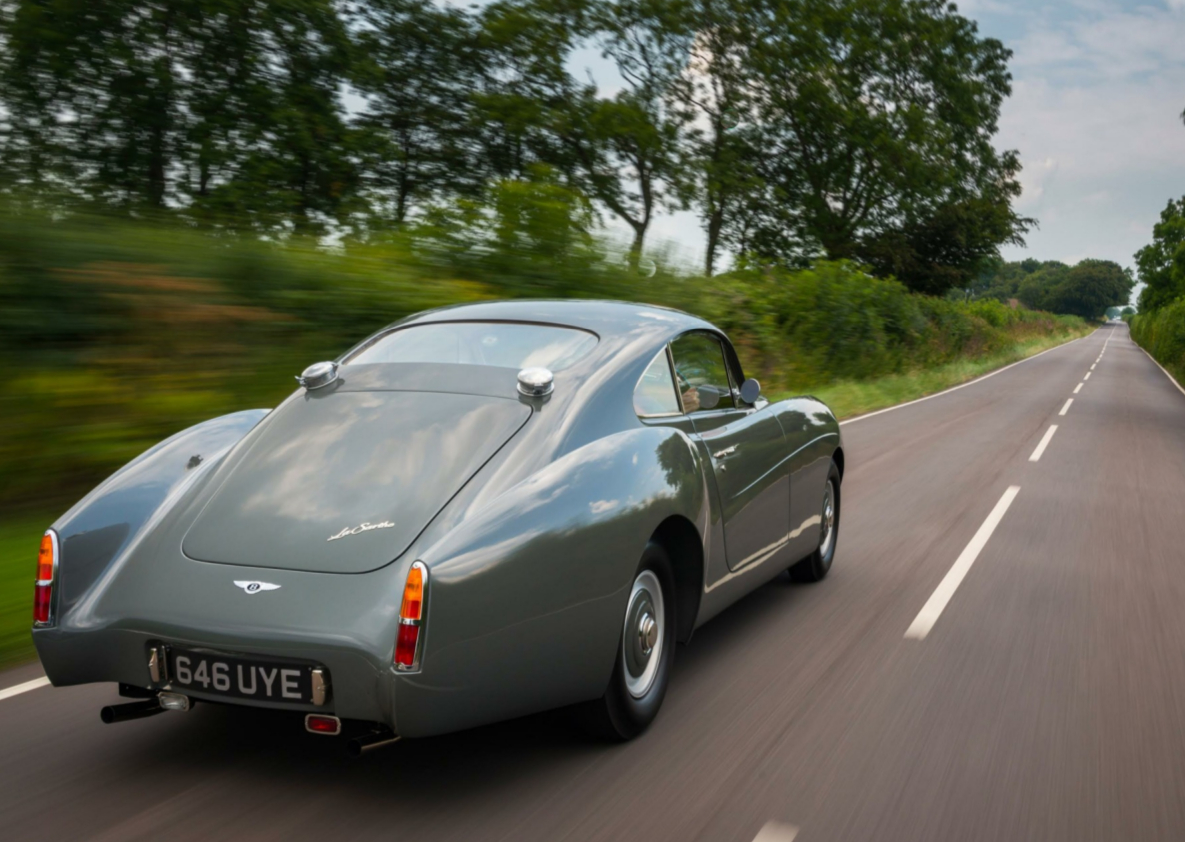 Seen from the rear quarter Bensport’s Bentley La Sarthe looks the part of a James Bond car complete with the twin fuel caps that tell us this car can endure a long distance car chase. The La Sarthe has just a hint of Aston Martin DB5 about it too. (Picture courtesy Bensport Ltd.).

Although in their information about their Bentley La Sarthe, Bensport don’t mention that they set out to build the iconic James Bond car, yet they appear to have inadvertently succeeded. This re-build of an old classic manages to put together a hint of classic Bentley and blend it into a car that stands out as being an even more iconic James Bond car than an Aston Martin DB5. 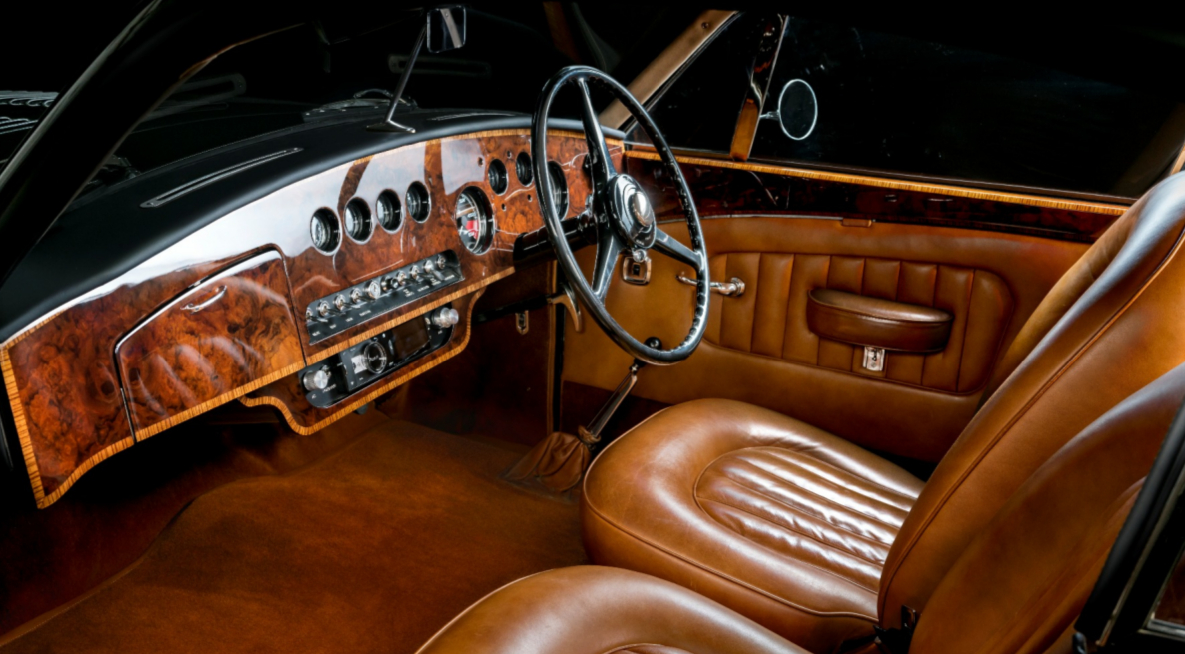 The interior of the Bensport Bentley La Sarthe is as opulent as it is classically British. Note that the original Bentley R-Type steering wheel has been used but that it has been reduced from 18″ to 16″ in diameter. The gear-lever is in the correct place for a classic Bentley also, on the right side. (Picture courtesy Bensport Ltd.).

The Bensport Bentley La Sarthe was not inspired by enthusiasm for James Bond however, but is instead inspired by Bentley’s impressive track-record at the La Sarthe racing circuit where the Le Mans 24 Hour motor race is held. Although, once Bentley had been taken over by Rolls-Royce, they were withdrawn from motor-racing, there were private owners of Bentley cars who decided to compete with them. One of these was the H.S.F. Hay entry in the 1949 Le Mans. This car was the famed Embiricos Bentley that had been built at the original Bentley works at Derby just before the beginning of the Second World War in 1938. The Embiricos Bentley was made to order for a Greek gentleman named André Embiricos who was a keen racing driver living in Paris. The coachwork for the car was designed by Georges Paulin who worked for coachbuilder Pourtout Carrossier. With the outbreak of the war André Embiricos sold his car to H.S.F. Hay in 1939. The car survived the war and in 1949 H.S.F. Hay entered the car in the Le Mans 24 Hour motor race, in which it managed sixth place.

The original Embiricos Bentley with coachwork designed by Georges Paulin and built by Pourtout Carrossier. The car is pictured outside the Bentley headquarters where it was displayed during 2012.

The Embiricos Bentley caught the attention of Bentley and became a car known in the public eye. It was campaigned in the 1949, 1950, and 1951 Le Mans races finishing in a creditable sixth place in 1949, and twelfth in 1950. Although it did not manage to finish in 1951 it still made a creditable 204 laps before having to retire. The car was a post-war inspiration and arguably led to Bentley’s creation of the R-Type Continental, which was the car Ian Fleming chose for James Bond. Not only did Fleming choose that car for his fictional hero, but he also helped his friend and wartime secret service colleague Ivar Bryce to purchase a suitably optioned one. Just like Bond’s car, Ivar Bryce’s was painted in “battleship gray”. 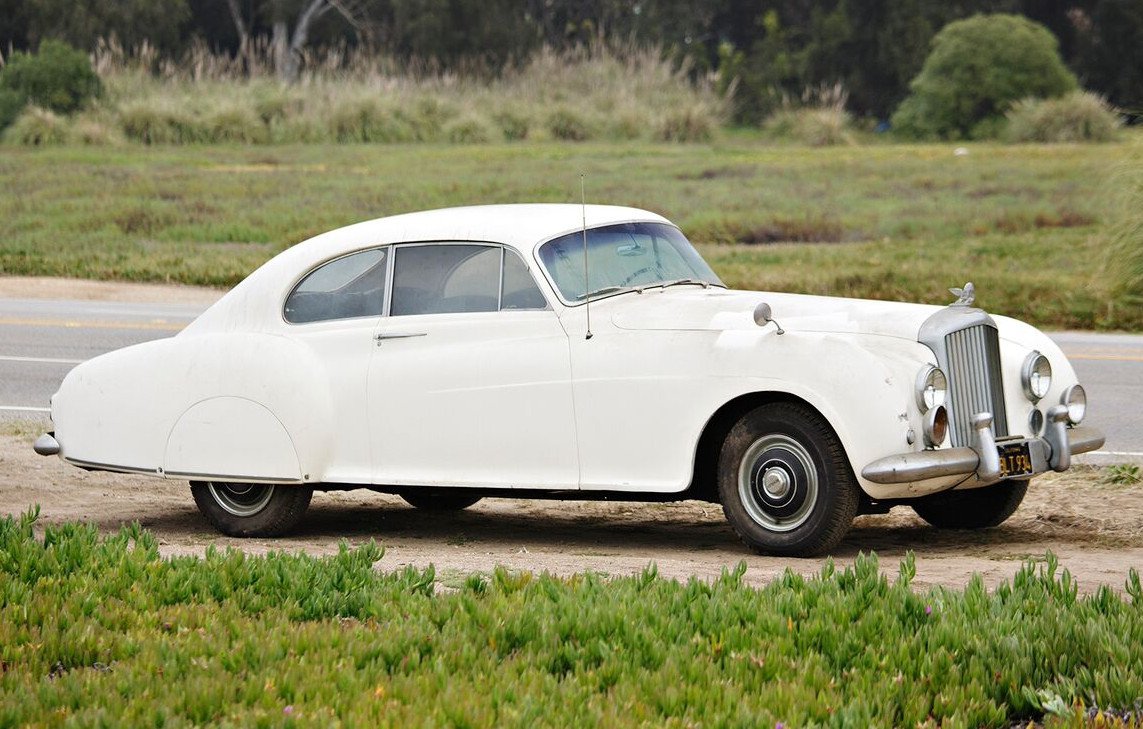 Ivar Bryce’s Bentley R-Type Continental came up for sale by Gooding & Company and you will find their sales page for it if you click here.

A comparison between the pictures of the Empiricos Bentley and the Bentley R-Type Continental show clearly the influence the Georges Paulin design had on the later R-Type. The R-Type Continental still looks somewhat like a Bentley that’s built by Rolls-Royce, but it was and is an inspiring car, and provides an excellent base for the creation of something just a tad more exciting. That is what the team at Bensport realized, and they set about designing it. 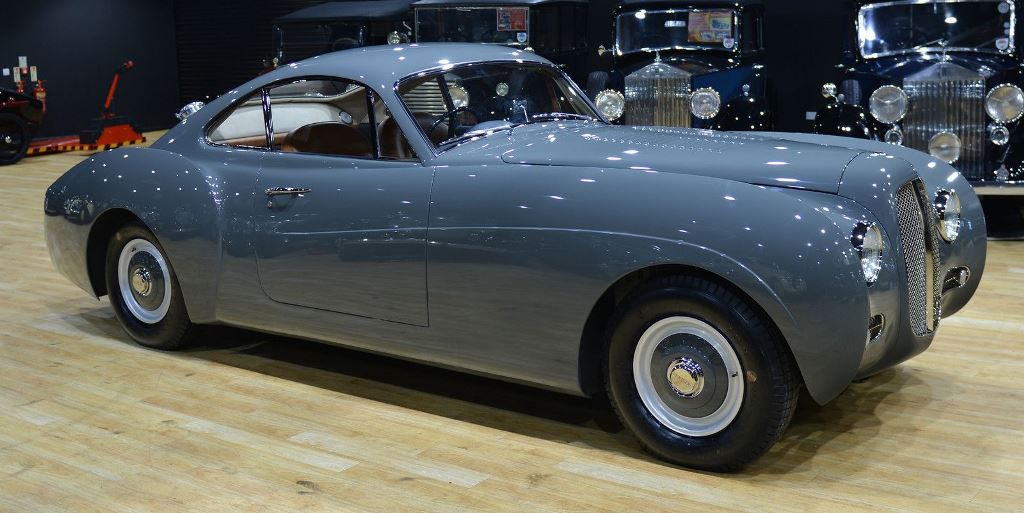 Bensport Bentley R-Type La Sarthe. By comparing this with the pictures above you can appreciate the design influences of both Georges Paulin and the R-Type Continental. (Picture courtesy Prestige Cars Ltd.).

Although there are some who try to tell us “You can’t turn the clock back”, the folks at Bensport are demonstrating that you can, and that you can do it with great success. Back in the 1950’s it was still possible to buy a Bentley (or Rolls-Royce) as a rolling chassis, and then have the coach-builder of your choice build the bodywork for it. Bensport are doing exactly that, but in this twenty-first century. The creation of a La Sarthe begins with an original Bentley R-Type (or Bentley Mark VI) rolling chassis from the 1950’s. The chassis is re-built to the best of British standards and subtly modified with the lastest modifications. In the process of rebuilding the chassis the steering wheel is reduced in diameter from 18″ to 16″ and a top-of-the-line EZ power steering unit is fitted. The 4.5 liter engine is re-built to become a 4.9 liter with lightweight Omega pistons, an electronic ignition system, and a six branch manifold with stainless steel exhaust. The original dynamo is replaced with a modern alternator to upgrade the car’s electrical capacity.

The car’s original gearbox is kept with the car, numbers matching, and the differential is re-built with the 3.08 final drive ratio of the R-Type Continental. This enables the car to cruise at 80mph with the engine at just 3,000rpm.

The vehicle’s Bijur chassis lubrication system is kept with all brass pipework being replaced. The original braking system is also retained but new drums are fitted as part of the re-build. 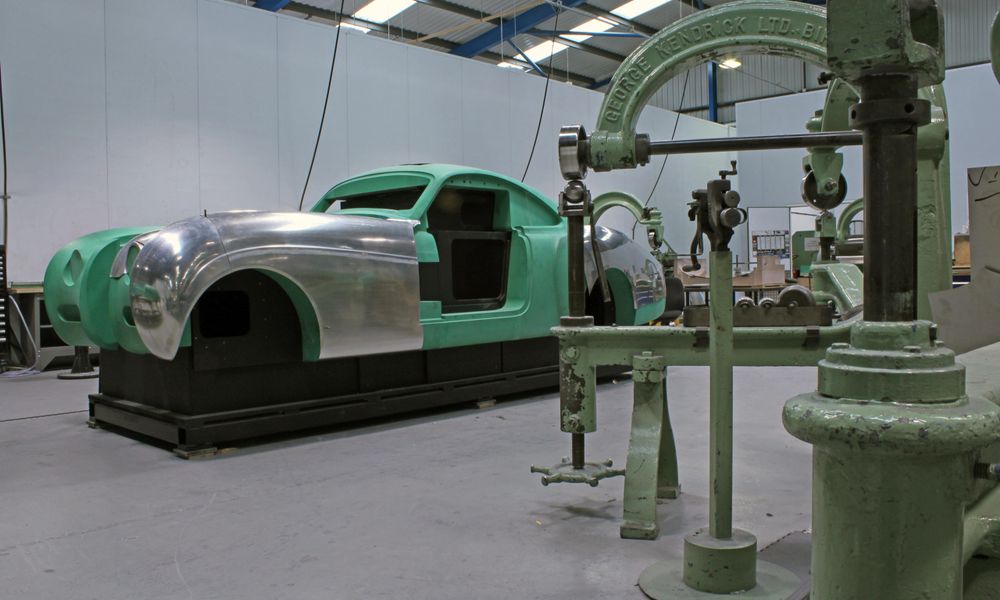 The bodywork of the La Sarthe is hand beaten aluminum. (Picture courtesy Bensport).

The coachwork is hand made using traditional methods. Quality of fit and finish are second to none. Similarly the interior is hand made to the highest standards.

The full technical details of the La Sarthe are in the Bensport brochure which you will find if you click here. 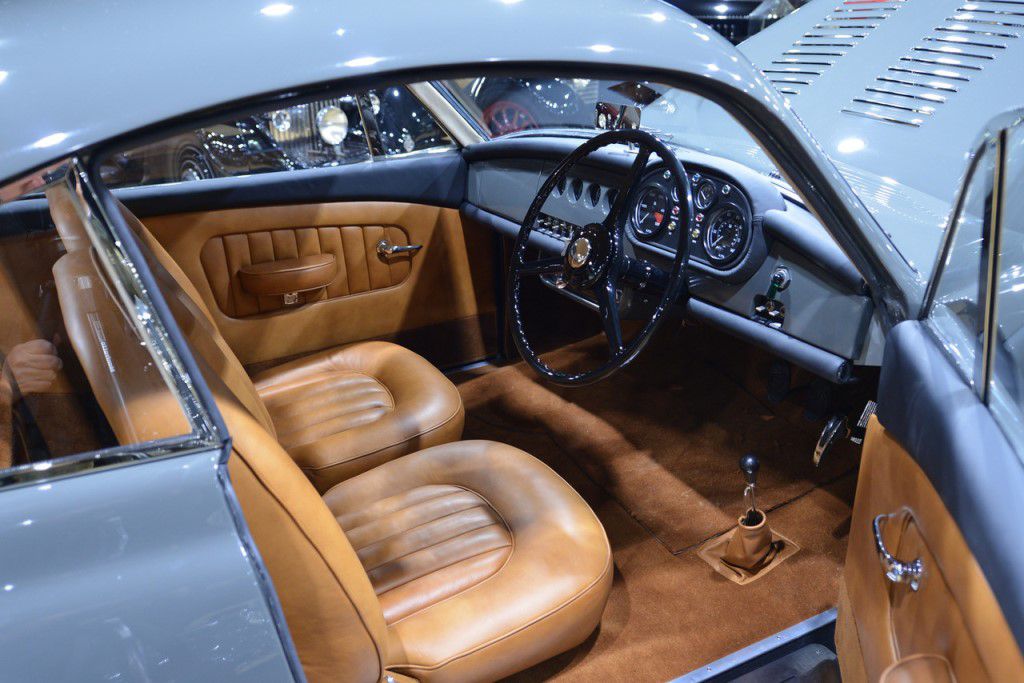 There are a range of options available for the La Sarthe, as can be appreciated by comparing this picture with the interior picture earlier in this post. (Picture courtesy Prestige Cars Ltd.).

The Bensport Bentley R-Type La Sarthe is testimony to the fact that one can “turn the clock back” and make “everything old new again”. If you are looking for a classic Bentley, one that Ian Fleming would have loved. Then you might want to visit Bensport’s web site, which you will find if you click here.

You will also find a Bensport Bentley La Sarthe for sale if you click here.

The Bensport Bentley R-Type La Sarthe is the perfect car for the person who “hasn’t bought a car since they stopped making cars”. 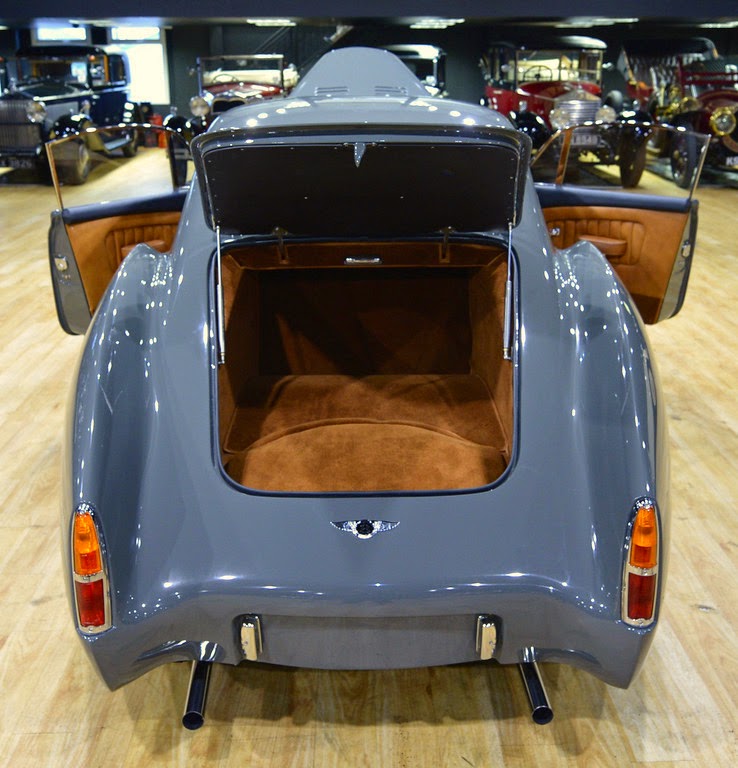 Boot space looks to be entirely adequate, although one might want to double check that your deer-stalking rifle case will fit comfortably. (Picture courtesy fabwheelsdigest).