If you’ve had the experience of having one of nature’s wild things coming at you with intent to do you bodily harm then you have a very real impression in your mind of just how intimidating that can be. To ensure against unhappy endings in such situations the British big game hunters of the golden age tended to prefer a double rifle because it offered a “swift sure second shot”. However, if you’ve had the opportunity to shoot a double rifle and needed to rapidly reload after that “swift sure second shot” you may have found that a sticky case can be an obstinate problem and your broken fingernails trying to get it out might be the least of your worries.

Back in 1989 Hungarian Joseph Szecsei had the experience of being simultaneously charged by three elephants. He survived the encounter, and decided that a double rifle or a good bolt action were not really enough life insurance when out after the big and the bad. In his thinking he wanted to design a rifle with all the advantages of a double rifle, and of a bolt action with its rapidly accessible magazine. So he invented a bolt action double rifle. 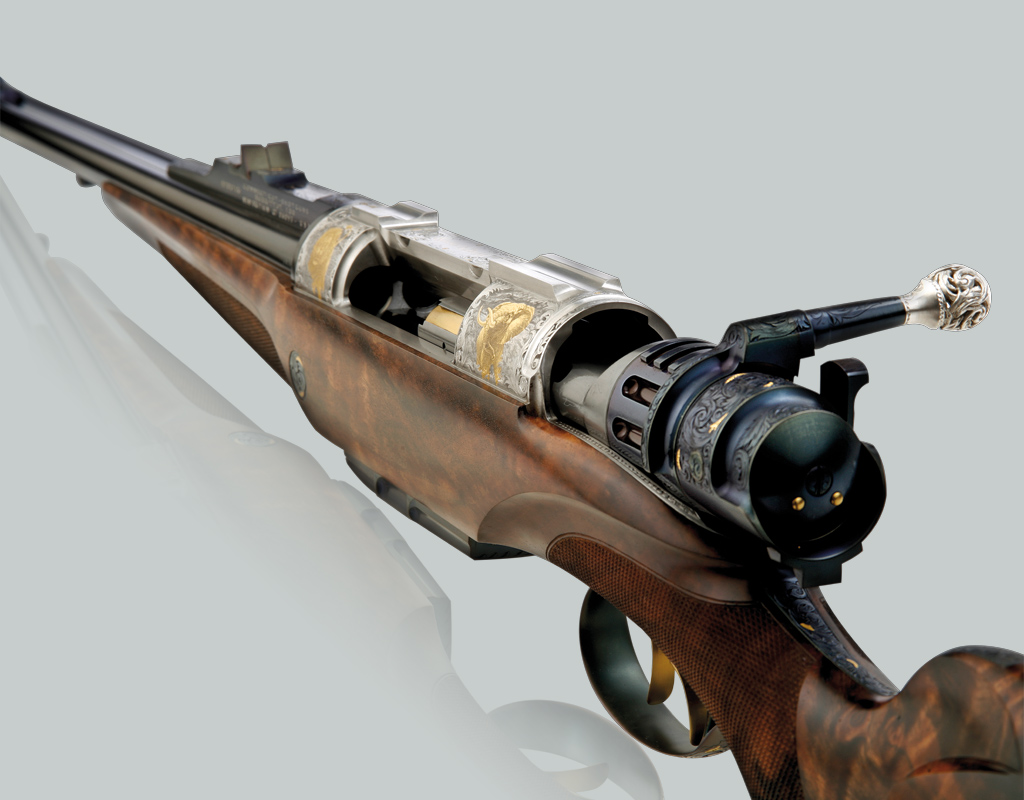 With the action open the double chambers of the breech can be seen. The Szecsei & Fuchs bolt action double rifle has both left and right side ejection ports.

Fuchs make some astonishingly beautiful decorative work on their rifles. This is the front sight of their “White Tiger” model.

To keep the weight of these rifles down to normal parameters extensive use is made of titanium. This enables the creation of the necessary double magazine and double sized bolt action yet keeping the rifle handy and easily portable.

The Szecsei & Fuchs bolt action double rifles come in both side by side, and over and under configurations. Calibers range from the pachyderm busting .470 Capstick down through the .416 Remington Magnum and .375 Holland & Holland Magnum for African and Asian Safari. Calibers then head down to include the European 9.3x62mm, 8x68S and the American 30/06 all the way down to the diminutive .17 HMR rimfire.

This Szecsei & Fuchs “African Queen” is an example of their over and under bolt action double rifles. The “African Queen” comes chambered for the .375 H&H Magnum making this a great “all around” rifle for the one rifle world wide hunter.

The smallest bolt action double rifle is called the “Hummingbird” and it is chambered for the .17 HMR rimfire cartridge. This is a fascinating small game rifle and is sure to be not only a wonderful companion for one’s rabbit, hare or fox hunting outings but, like all Fuchs firearms, is an investment quality work of the gunsmith’s art. 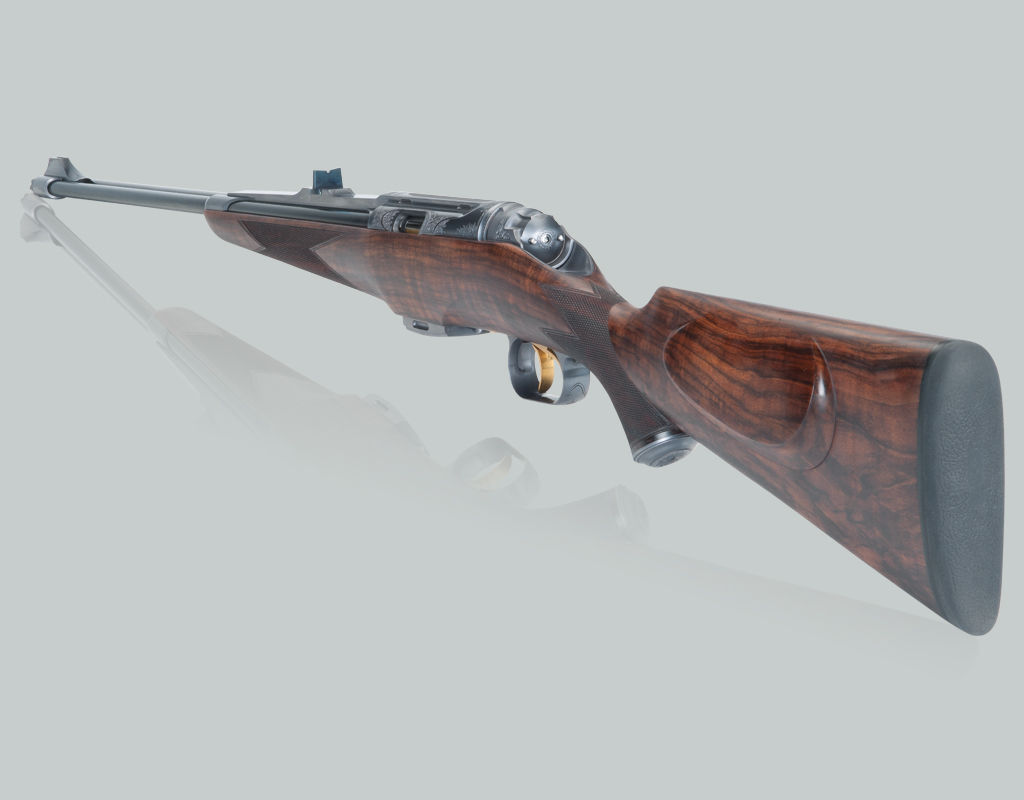 The Szecsei & Fuchs “Hummingbird” is chambered for the .17HMR which is the smallest caliber offering for the bolt action double rifles.

The “Hummingbird’s” bolt and magazine assemblies give an idea of how simple yet ingenious Mr. Szecsei’s rifle design is. 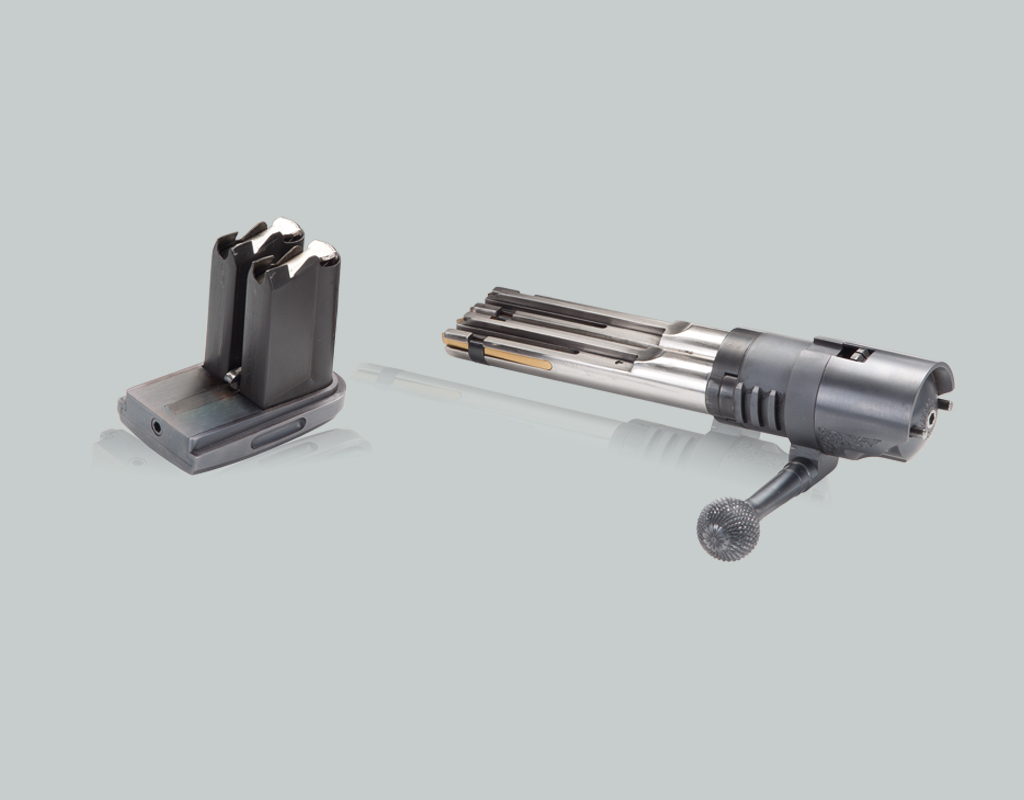 This picture of the Hummingbird’s double magazine and bolt design show the genius of Mr. Szecsei’s design.

In addition to their fascinating range of bolt action double rifles Fuchs also make ordinary double rifles, bolt action rifles, and double shotguns. Fuchs “King of Africa” double rifle is chambered for the .577 Nitro Express which is pretty much guaranteed to stop a charging elephant or hippo as long as the hunter does his part and places that 750 grain bullet where it needs to go.

Fuchs “King of Africa” is a conventional double rifle chambered for the .577 Nitro Express.

The Fuchs “Marksman Hunter” is chambered for the .338 Lapua.

You can find the complete range of Fuchs’ sporting arms including Joseph Szecsei’s unique bolt action double rifles at Fuchs’ website which you will find if you click here. 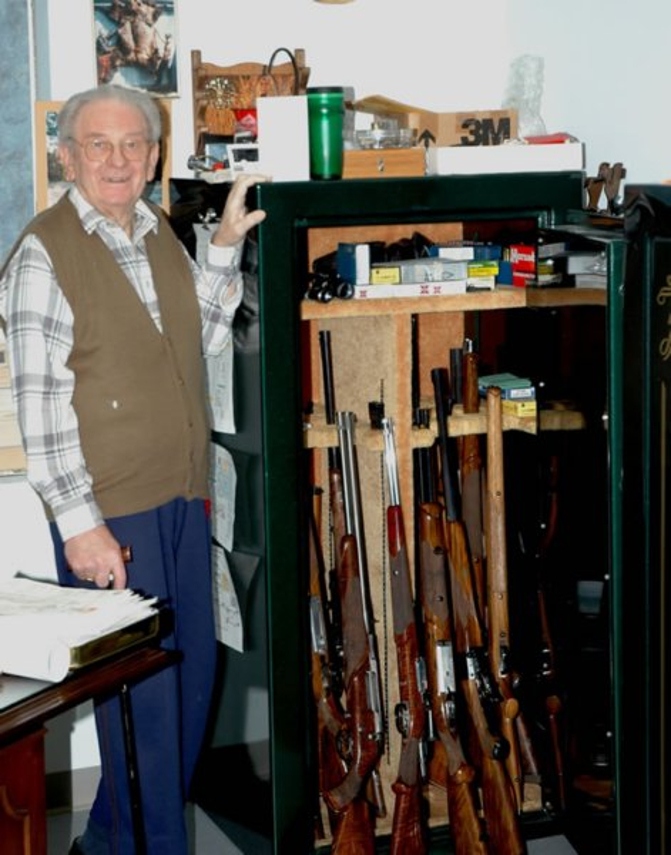 Joseph Szecsei with some of his prototype designs. (Picture courtesy szecseidoubleboltrepeater.ca). 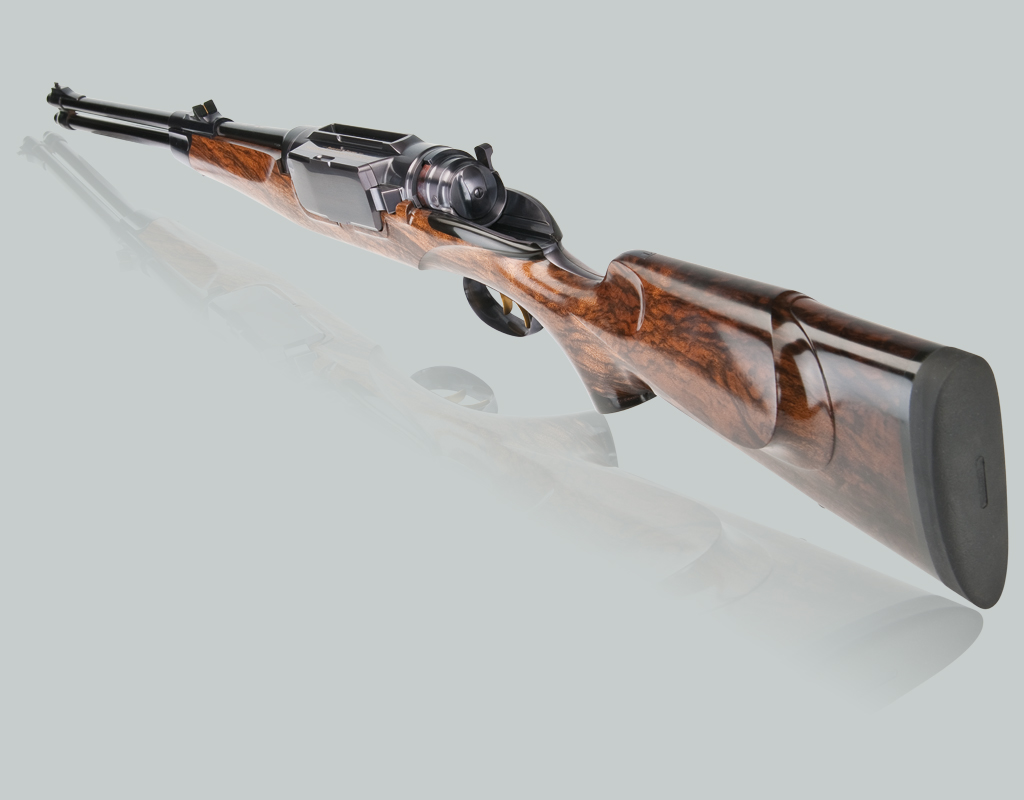 The Szecsei & Fuchs “Blue Boy” over and under bolt action double rifle is made in 8x68S. Rifle scope mounts or Picatinny rail can be mounted on the action top.