Its not often you get to handle a rifle that is worth as much as a house, it happened to me exactly once, and the rifle concerned once belonged to a royal family. The rifle’s owner enjoyed it very much and often used to take it shooting: but sadly I didn’t get to shoot it. In the movie “The Princess Bride” Wesley, who is also the Dread Pirate Roberts, says to one of his adversaries “Get used to disappointment”, and so it was for me, I didn’t get to shoot the rifle, and so I got used to the disappointment. 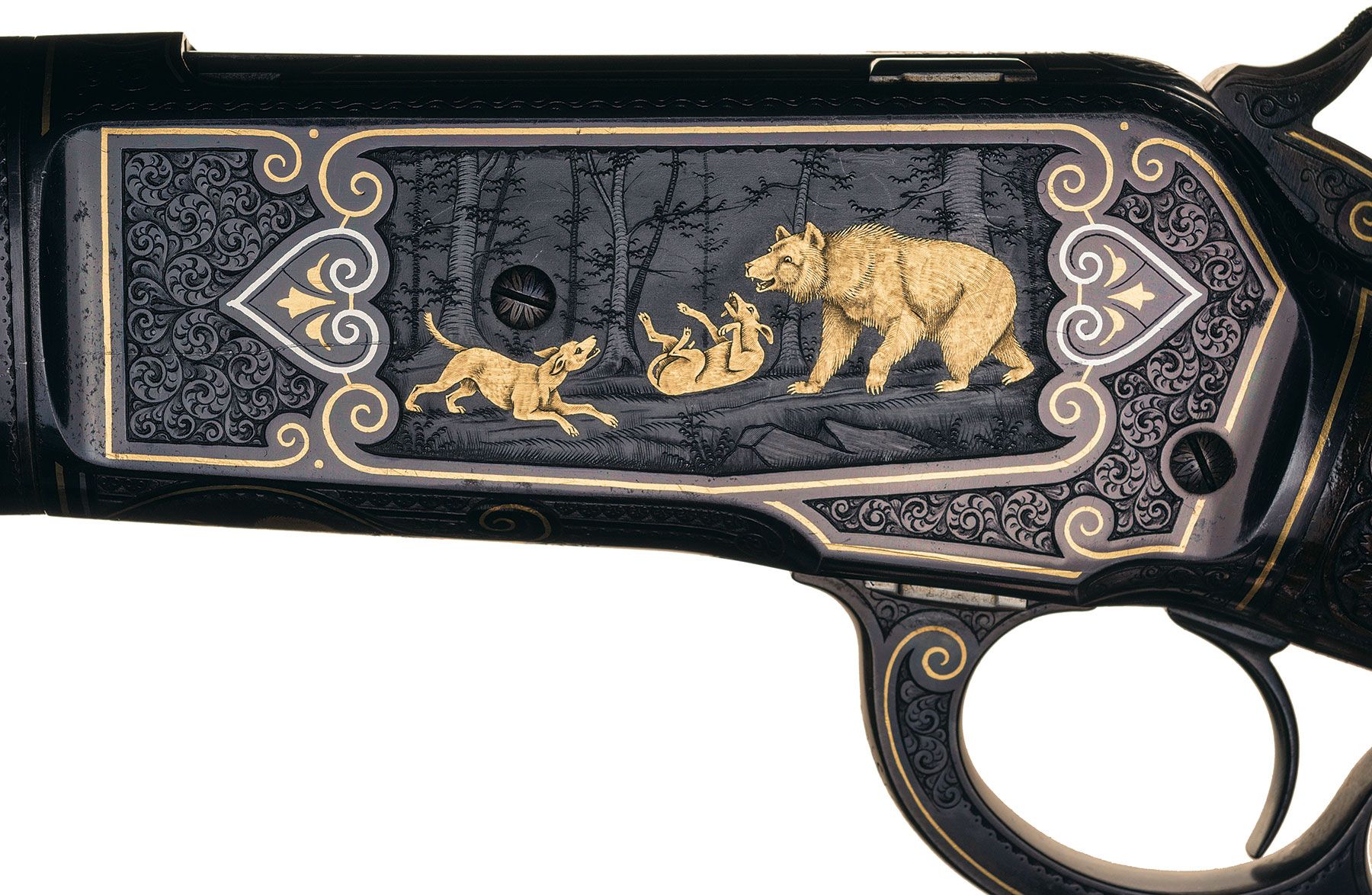 John Ulrich’s engraving has an “alive” quality about it. The bear almost seems to be smiling as she thinks “You’ll be tasty”. The other hound looks like he’s already had his “encounter of the hungry bear kind”.

The Winchester Model 1886 we are looking at in this post is described as “… the finest factory engraved Winchester Model 1886 Express Rifle known.” It is valued somewhere between a half to three quarters of a million US dollars. So if you are an avid Winchester collector, with deep pockets, and a desire to invest in one of the most valuable rifles on the collector market, then this rifle might just be of interest to you. 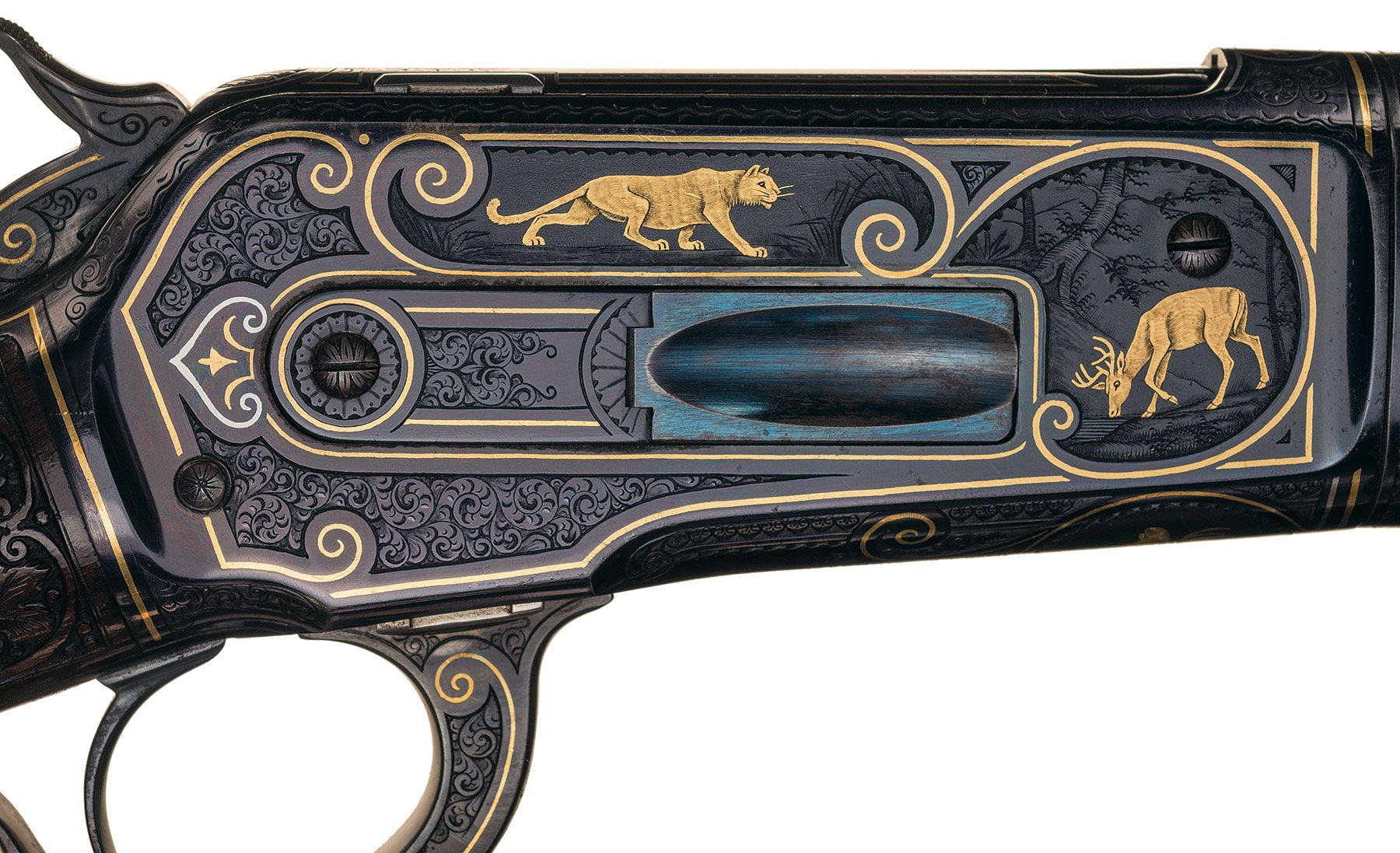 The right side of the action features another hungry predator just about to try to get a nice venison lunch.

If however, like me, your pockets just aren’t quite that deep, read on anyway because this rifle is probably the best example of Winchester gun-smithing, complimented by the work of master engraver John Ulrich, in existence.

The Winchester Model 1886 was John Moses Browning’s second design he did for Winchester. His previous rifle had been the Model 1885 single shot which he sold to Winchester at the age of nineteen. For this new Model 1886 lever action rifle he would sell manufacturing rights to Winchester two years later when he was twenty-one. John M. Browning provided Winchester with not only drawings but also a working wood model of his new lever action.

Top action view of the Model 1886 showing the twin locking lugs that secure the action and bolt together. Inlays are gold and platinum.

Action underside showing the locking lugs in their lowered position. The bottom of the receiver features a moose.

Browning’s design was simple yet very clever. He created a mechanism that coordinated the unlocking of the action with the withdrawal of the bolt and ejection of the cartridge case on the down-stroke of the lever, and then the retrieval of a fresh cartridge from the tubular magazine and its alignment with the chamber so that as the lever was raised the cartridge was neatly chambered and the action locked before the trigger could be pulled.

Complete rifle, right side view. Barrel length is the standard 26″.

John M. Browing worked with Winchester’s engineers to bring the Model 1886 up to production and the design was granted US Patent 306,577, on October 14th, 1884.

The reason that Winchester were interested in this new rifle in the first place was because previous lever action rifles were neither big enough nor strong enough to handle full size rifle cartridges from the .45-70 up to the .50-100-450 (i.e. .50″ bullet, 100 grains of gunpowder, 450 grain bullet). John M. Browning’s design brief had been to create a lever action rifle specifically for cartridges of this class.

This rifle is chambered for the 50-100 Express black powder cartridge.

While the majority of Winchester Model 1886 rifles were made chambered for the common .45-70 cartridge there were a number of chamberings offered such as the .45-90 and .50-110.

The Model 1886 was not just a precision made sporting rifle however and even found a place in the First World War. The British Royal flying Corps. purchased a number of Winchester Model 1886 rifles in .45-90 and special incendiary ammunition for use against German airships, which were filled with extremely flammable Hydrogen and so they responded to being hit by a .45-90 incendiary bullet in quite spectacular fashion.

The Model 1886 action was inherently strong and so was able to be slightly modified in 1935 to become the Winchester Model 71 chambered for the nitro .348 Winchester cartridge.

This rifle bears the signature of Winchester’s most well known engraver, John Ulrich.

The Model 1886 was available as a take-down rifle and the rifle in our pictures is one of these. The take-down collar and barrel breech are decorated with scroll-work, scalloped borders and gold and platinum inlays in the best of John Ulrich’s style.

The take-down collar and barrel breech are decorated with scroll-work, scalloped borders and gold and platinum inlays.

This rifle has been featured in the book “Winchester Engraving” by R.L. Wilson on page 216 and comes with factory documentation.

Its condition is described by Rock Island Auction as follows: “Excellent. The barrel has nearly 98% of the original blue finish with one very small spot of fading on the top flat and several very minor handling marks. The barrel engraving is very crisp and the gold and platinum inlays are in perfect condition.

The Winchester legend and caliber markings are crisp. The magazine has the minor scuff marks below the band that are inevitably found on take-down rifles but also retains 98% of the blue finish. The forearm cap has several very minor age spots with 95% of the bright original blue. The receiver has 95% plus of the bright original blue finish with some spotting and very minor finish wear on the lower tang behind the trigger.

The highly detailed and flawlessly executed gold-inlaid vignettes and game scenes are in perfect condition. The loading gate shows some light wear and retains about 80% of the fire blue finish. Nearly all of the blue is present on the bolt. The blue finish on the buttplate shows scattered age spotting and high point wear but remains about 90% complete. The case colors on the right side of the hammer show some cycling wear; 95% plus of the case colors are present on the lever.

This spectacular rifle is the finest known example of Winchester No. 1 factory engraving and Style A stock carving, and represents the absolute peak of 19th and early 20th century factory craftsmanship that will never again be duplicated. This is the finest factory engraved Winchester Model 1886 Express Rifle known.”

This quite unique rifle is coming up for sale by Rock Island Auction at their “Premier Auction” on September 7th, 2018.

You will find the sale page with more details about this rifle if you click here.

This rifle is a potentially once in a lifetime opportunity to acquire a Winchester of this quality and provenance.

Rock Island Auction have a significant number of valuable Winchester lever action rifles also coming up for sale at this auction.

You will find the general auction page if you click here.

Below is a video showing some of the Winchester lever action rifles that will appear at this auction.

If you are looking for a new Winchester Model 1886 you will find the available models at the Winchester web site if you click here.

The new models are beautiful, and quite affordable: they are well worth checking out.