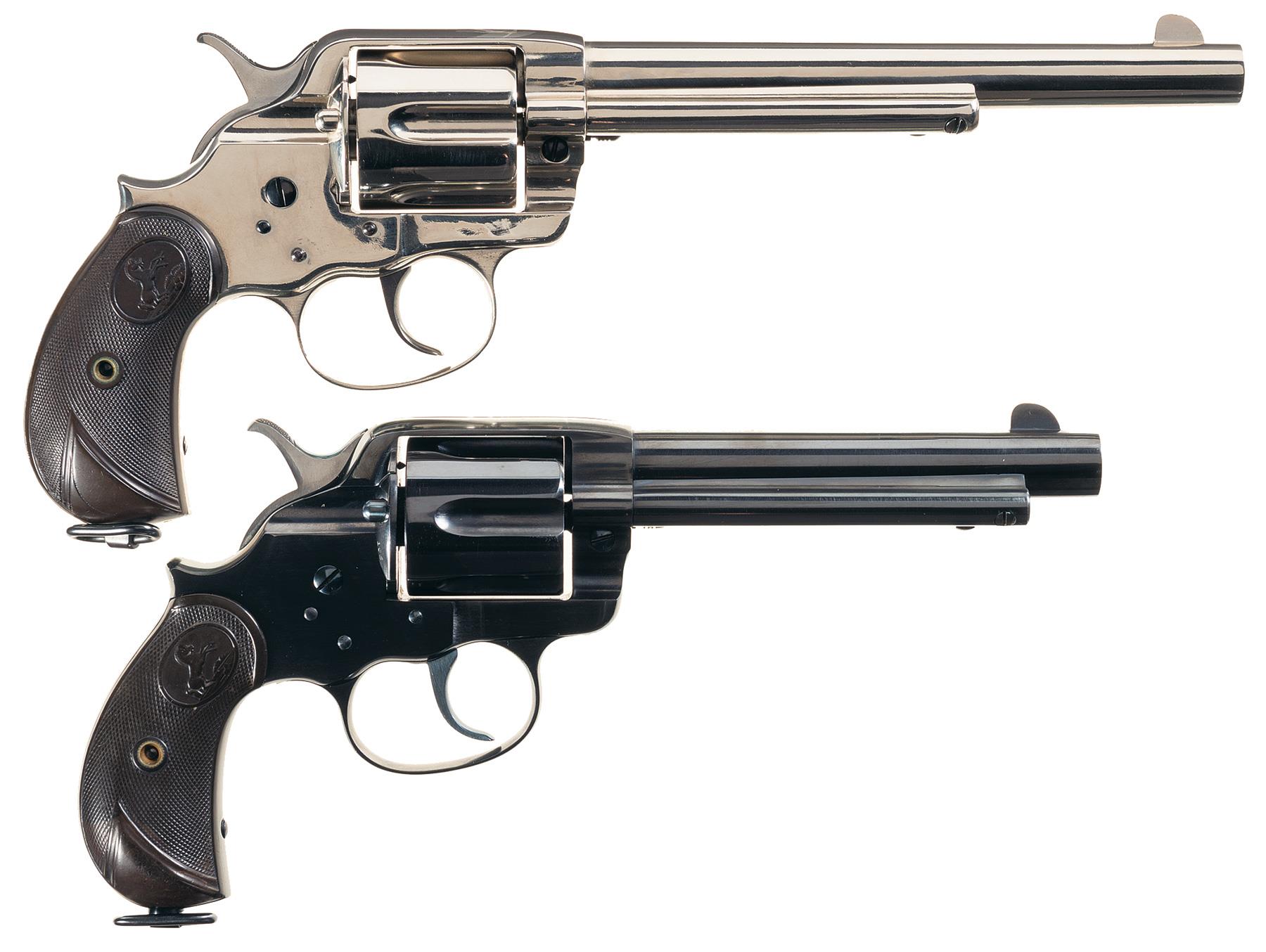 Two Colt Model 1878 large frame double action revolvers. The top one is chambered for the .45 Colt and the lower one for the .44-40.

These were not Samuel Colt designs but were created by Colt Factory Manager William Mason and the Superintendent of Engineering, Charles Brinckerhoff Richards. Between them Mason and Richards had created the Model 1877 and used a very similar design simply made bigger for the large frame Model 1878. Both the 1877 and 1878 models were evolutionary designs based on the Colt Single Action Army Model 1873. 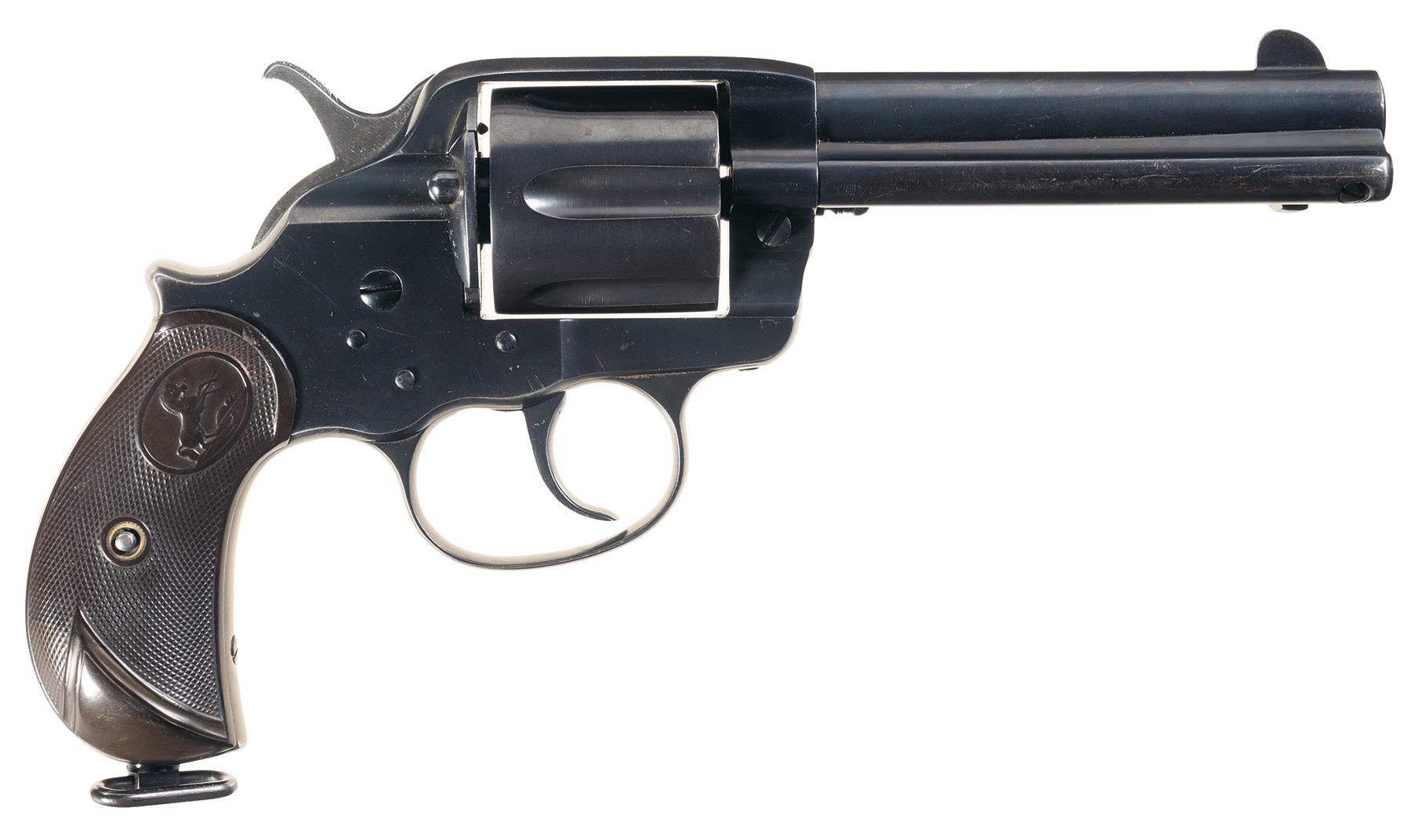 Although the M1878 was effectively an evolution from the Colt Single Action Army there were some important differences. The frame of the revolver and the ergonomic “birds head” grip were made as one piece. The trigger guard was separate. The hammer spur was lowered and shortened so it did not interfere with the sight picture on firing (unlike the standard Single Action Army but similar to the “Bisley” model). A circular panel was provided on the left side of the frame to allow access to the mechanism. 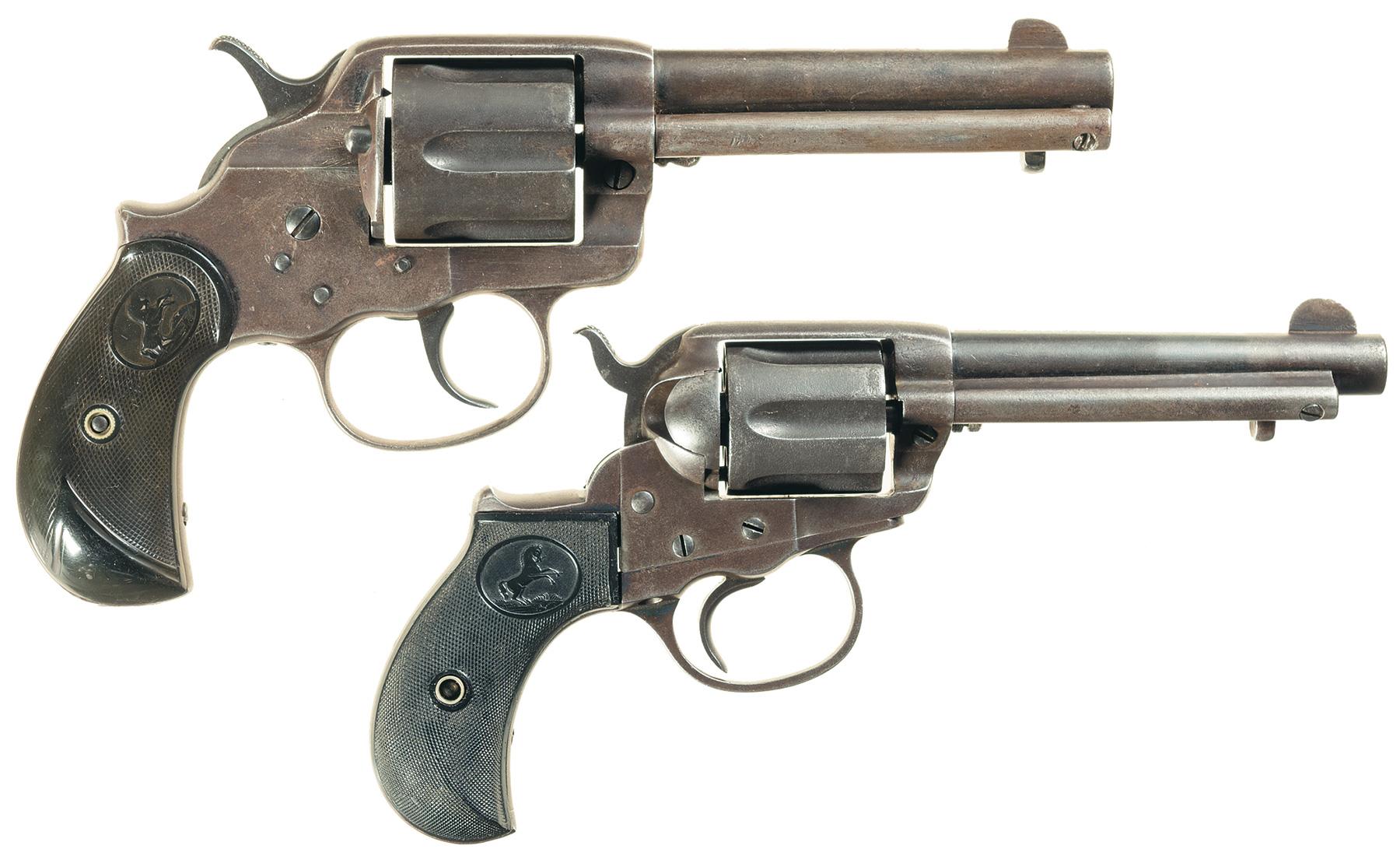 The Colt Model 1878 may be found with original factory walnut grips but the vast majority were fitted with “hard rubber” grips actually molded from gutta-percha which is a naturally occurring thermoplastic that comes mainly from the Palaquium gutta tree. The name “gutta-percha” is an Anglicization of the Malay name “getah perca“; “getah” means sap and “perca” being the name of the tree.

The Colt M1878 was known for its long hard double action pull which made accurate double action use difficult. This led to a modified model being created for US military personnel serving in the Philippines. This “Philippine” model has a longer trigger and consequently a much larger trigger guard which gives the revolver a quite ungainly appearance. The main reason for creating this model was because the .45 Colt government supply ammunition had a harder primer which required a more robust hammer strike. With the hammer strike being made harder so the double action trigger pull also became harder, necessitating the longer trigger modification. This large trigger guard led to some imagining that the modification had been done to better allow the revolver to be used with gloves on and so it is sometimes referred to as the “Alaskan” model The modification was not done with the use of gloves in mind however so these large trigger guard M1878’s with their long trigger should more correctly be referred to as the “Philippine” model. 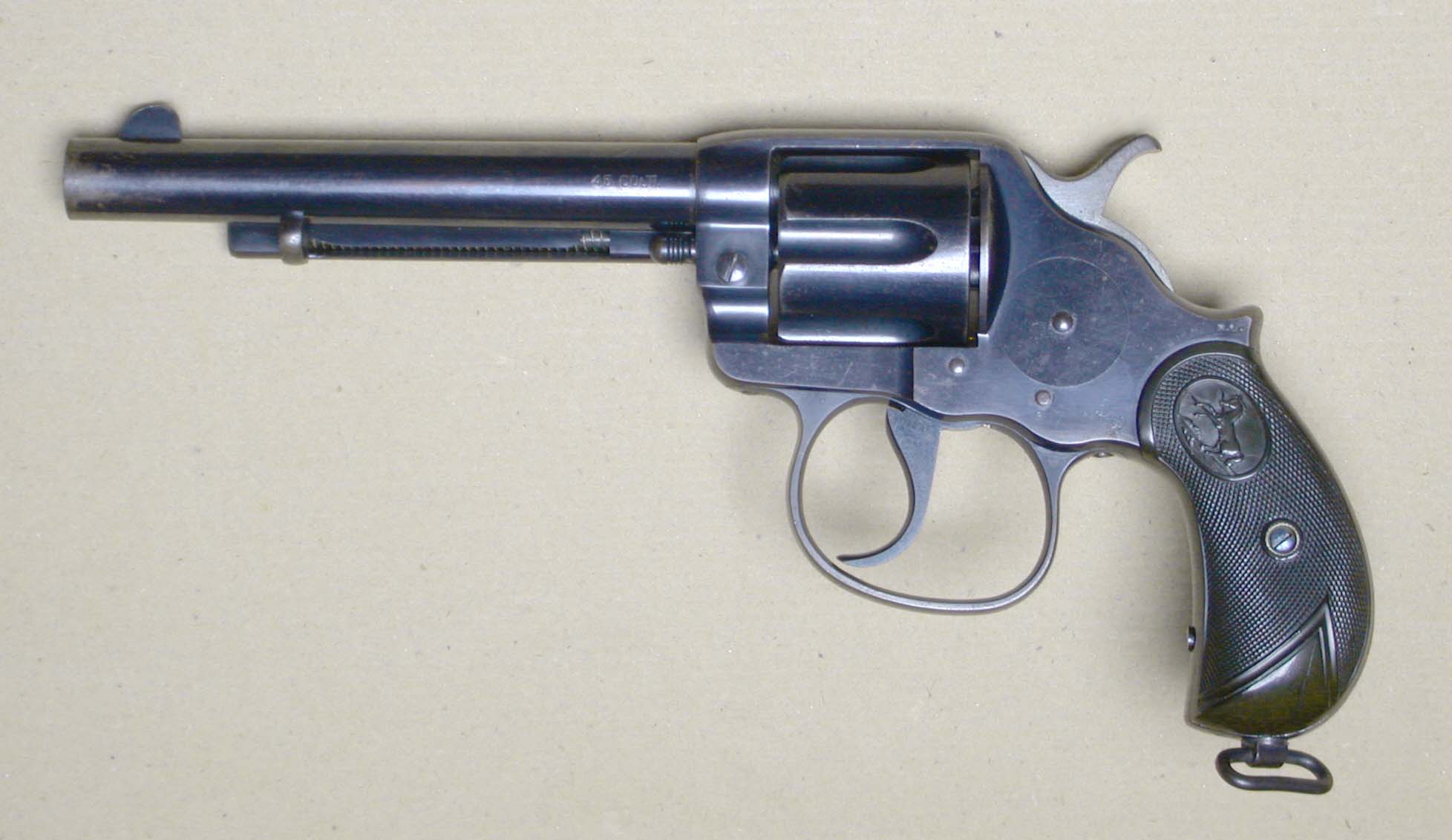 The Colt Model 1878 was certainly made in the right calibers to be a success but, like the Colt Model 1877, it proved to be unreliable by comparison with the Colt Single Action Army Model 1873 so it was made in large numbers but it did not survive beyond 1907. For British military use double action revolvers such as the Webley New Model Express No. 5 which was being made around the same time proved to be reliable and tended to be favored for officers wanting a double action revolver whilst the Colt Single Action Army was a revolver of choice for those favoring the single action.

Samuel Colt was proved to have been partially right. The double action revolver was difficult to make as reliable as a single action. But as metallurgy and design technology improved the double action eventually took over as the revolver of choice for military and police use. It is with us today and it remains true that not much of anything is quicker or easier to get into action than a double action revolver.

The revolvers in our pictures above except for the M1878 “Philippine” model are coming up for sale by Rock Island Auction in their February 16th sale which accepts phone bidding and sealed bids.

There are quite a number of other Colt M1878 included in this auction which you can browse if you click here.

William Mason left Colt and joined Winchester in 1883. Colt were bringing into production their own lever action rifle the Colt Burgess of 1883 and were also introducing their Colt Lightning pump action rifles of 1884. At Winchester William Mason worked with a gentleman named Stephen Wood who had been recruited from Remington to create a prototype Winchester revolver. It is worth comparing the Colt Model 1878 with the Winchester Model 1883 that Mason and Wood created. You’ll find the story if you click here.

(All pictured courtesy Rock Island Auction except as otherwise marked).