William G. Henderson and his brother Tom W. Henderson went into the motorcycle design and manufacturing business in 1911. William was the designer and Tom’s role was primarily in sales and management. From the start the Hendersons only made in-line four cylinder motorcycles and this became their trademark style of motorcycle that would endure in various forms right through until 1942. The Hendersons were not the first to make in-line four cylinder motorcycles in the United States however, they were the third, but it was William G. Henderson’s design that was to be the most well known, and it would be developed by others after his accidental death in a motorcycle accident in 1922. 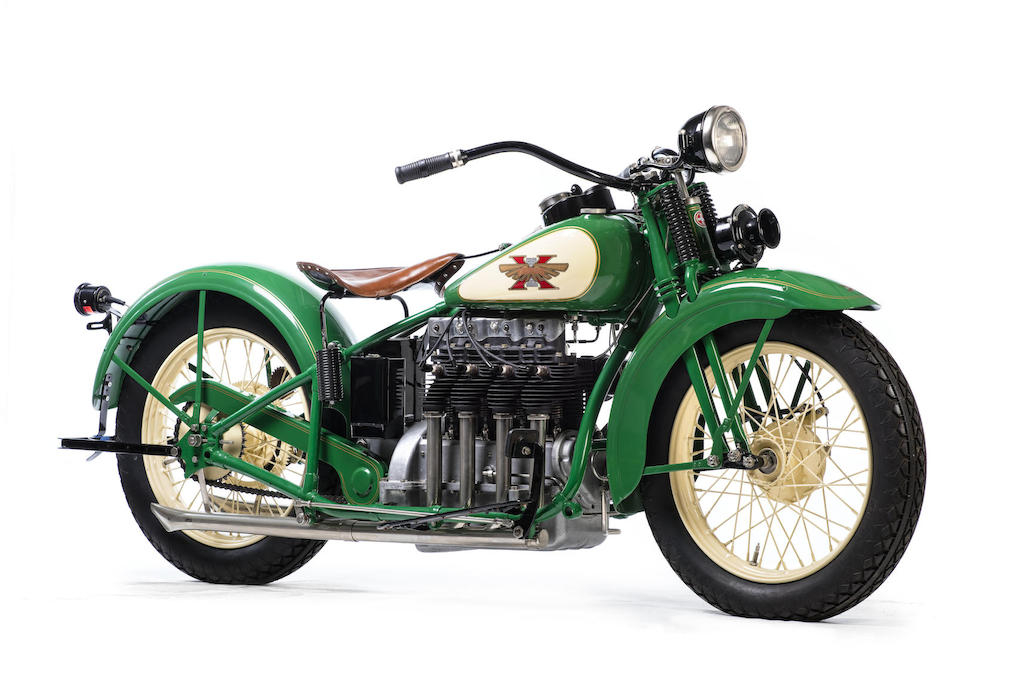 The First World War was not kind to the Henderson brothers and they experienced difficulties in getting supplies of materials and parts to keep making their bikes. These problems created cash flow problems that were beyond the resources of the brothers to solve. On 17th November 1917, even as the tide of events in  “The Great War” was turned by American troops being committed to the war effort, William and Tom Henderson sold their business to a wealthy bicycle maker named Ignaz Schwinn who owned the Excelsior Cycle Company. 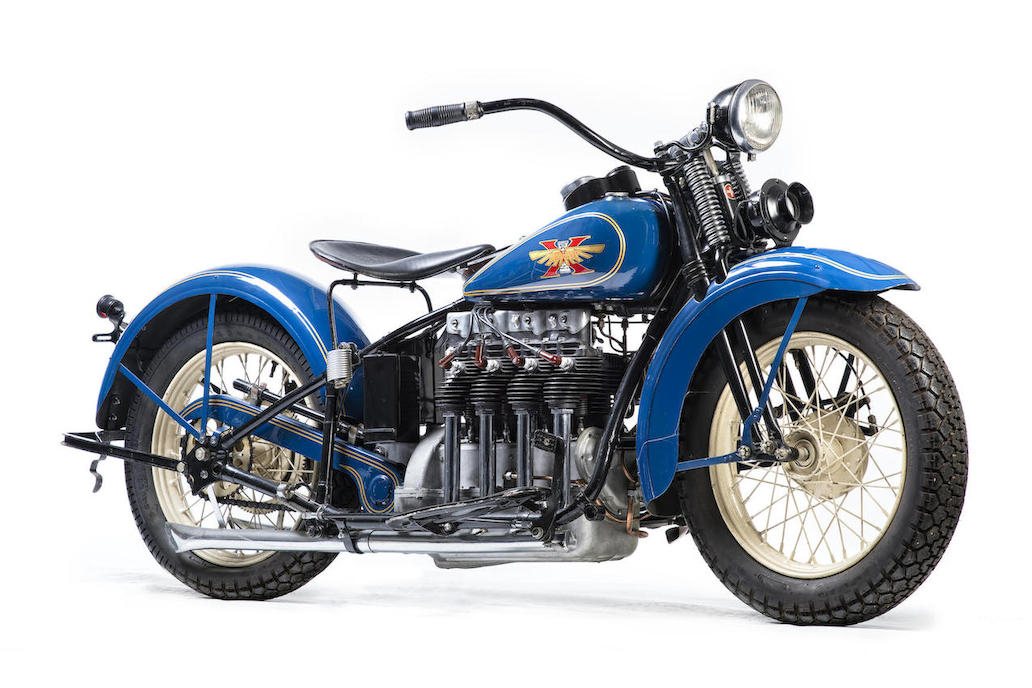 Both William and Tom were employed by Ignaz Schwinn to work for Excelsior; William was made Factory Superintendent at a salary of $5,000.00 per year whilst Tom became General Sales Manager at $10,000 per annum. Tom also received 200 shares in Excelsior valued at the time at $25,000.00 with the caveat that Ignaz Schwinn would hold onto those shares for five years and Tom would not receive them if he left Excelsior under bad terms during that time. Tom was also to be paid a royalty of $2.00 for each motorcycle sold over the coming five years. It is interesting that Tom Henderson, the salesman, was valued at more than double his brother who was the engineer. We can only wonder what William Henderson thought of that. 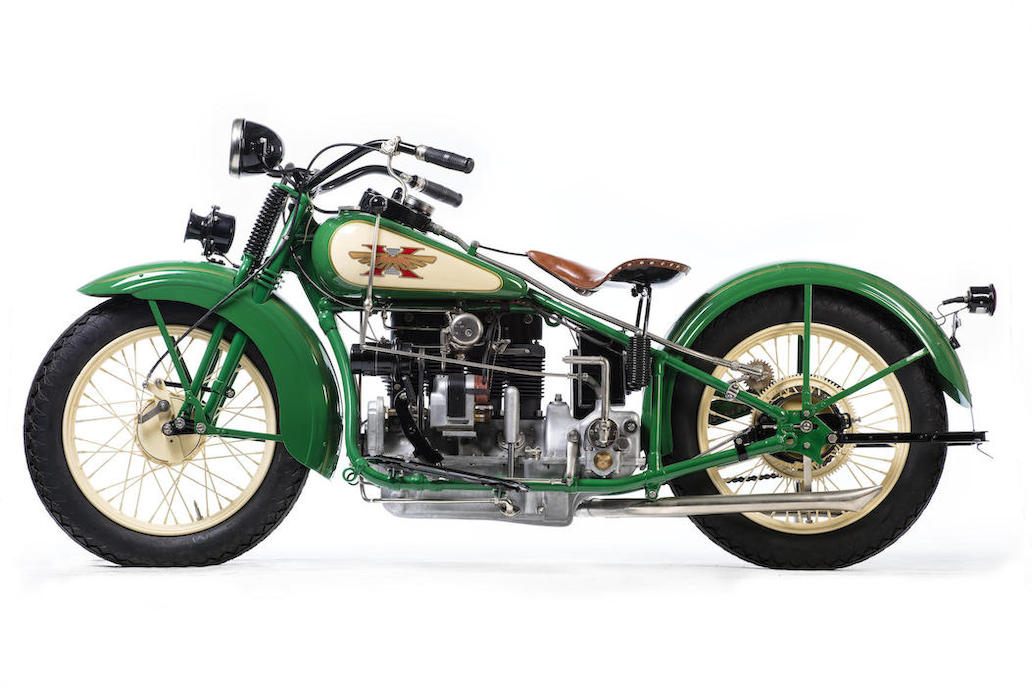 Left side view of the 1929 Henderson Streamline KJ Four.

In 1918 Ignaz Schwinn moved the entire Henderson manufacturing facility to Chicago where his bicycle business was based, no doubt to ensure everything was securely under his control. Tom Henderson took the decision to resign from Excelsior and he moved to an export company called Melchior, Armstrong and Dessau who were involved in export of the Excelsior Henderson motorcycles to Europe. William meanwhile was becoming discontented with having lost his design freedom. Another ex-Henderson engineer named Arthur O. Lemon who had initially worked with Henderson as a salesman also had motorcycle design interests and it was his ideas that Ignaz Schwinn wanted incorporated into the new model for 1920. This Arthur O. Lemon design changes to the Henderson created a heavier motorcycle with a 79.4 cu. in. engine developing 18hp. Lemon’s design changes also included using a pressurized oil delivery system as opposed to the less reliable splash oil system of the original Henderson design. Arthur Lemon also refined Henderson’s four cylinder engine by using side valves for both intake and exhaust. These changes created a heavier, but more reliable and more sturdy motorcycle. But William Henderson’s vision had been to create a lively lightweight machine and his ideas had been effectively side-lined. In 1919 he also left Excelsior and in partnership with a man named Max M. Sladkin and created Ace Motorcycles. The Ace motorcycle William went on to create was indeed a lightweight machine that weighed just 368lb despite the fact that it had a 1,220cc four cylinder engine. 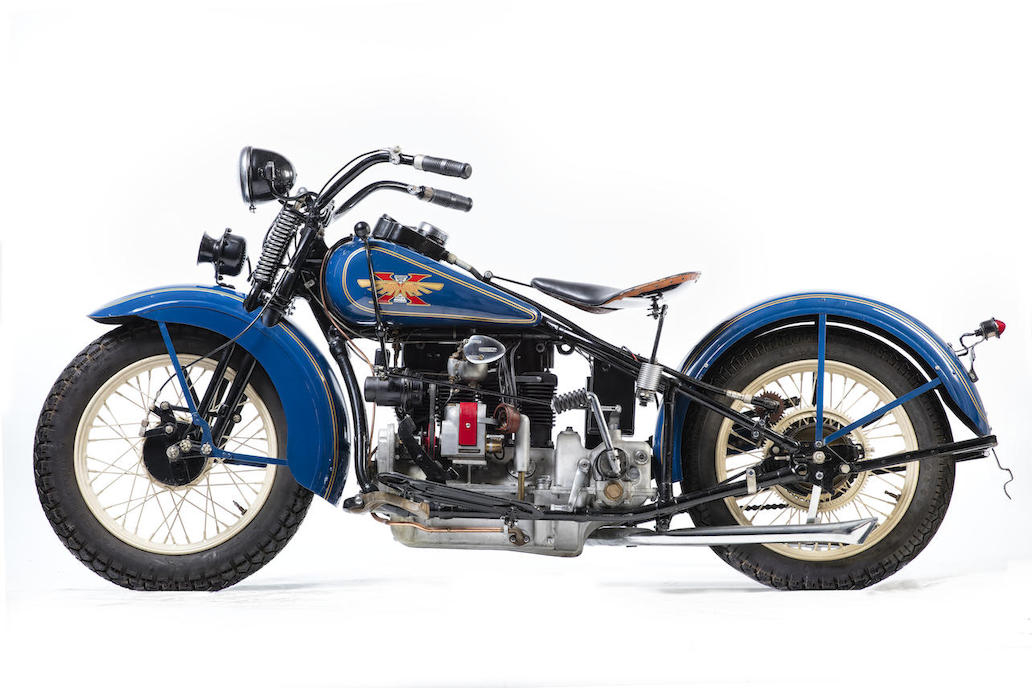 The re-designed Excelsior-Henderson made its debut in 1920. It was the bike that William Henderson would not have designed but it proceeded to establish a number of transcontinental record runs and speed records that left no doubt as to its durability and speed. As the Prohibition Act of 1919 took hold on America on the “Thirsty First” of July 1919 organized crime syndicates were not slow to capitalize on the new business of supplying bootleg liquor. And as the organized crime gangs became more and more rich and consequently better equipped and armed the police became more and more in need of fast and reliable motorcycles on which to do battle with the bootleggers. The Excelsior-Henderson became pretty much the police bike of choice with the Harley-Davidson hot on its heels. No doubt those in government who created the Prohibition Act did not foresee how their law which they had believed would make America a better and safer place achieved the exact opposite such that the police needed ever faster bikes to catch the gang members and more and more powerful firearms to compete with them. The .357 Remington Magnum revolver cartridge and Smith & Wesson Model 27 revolver having been created specifically to provide police officers with the power they needed to survive against gang members.  Interestingly despite the movies portraying the Thompson sub-machine gun as being the number one gangster weapon it only fired the .45ACP cartridge which meant it did not have the ability to reliably penetrate steel car bodies. Both gangsters and police finished up moving up to “super” .38 handguns and the Browning BAR semi-automatic rifle became the weapon of choice. Clyde Barrow for example never used a Thompson, he much preferred the Browning BAR. 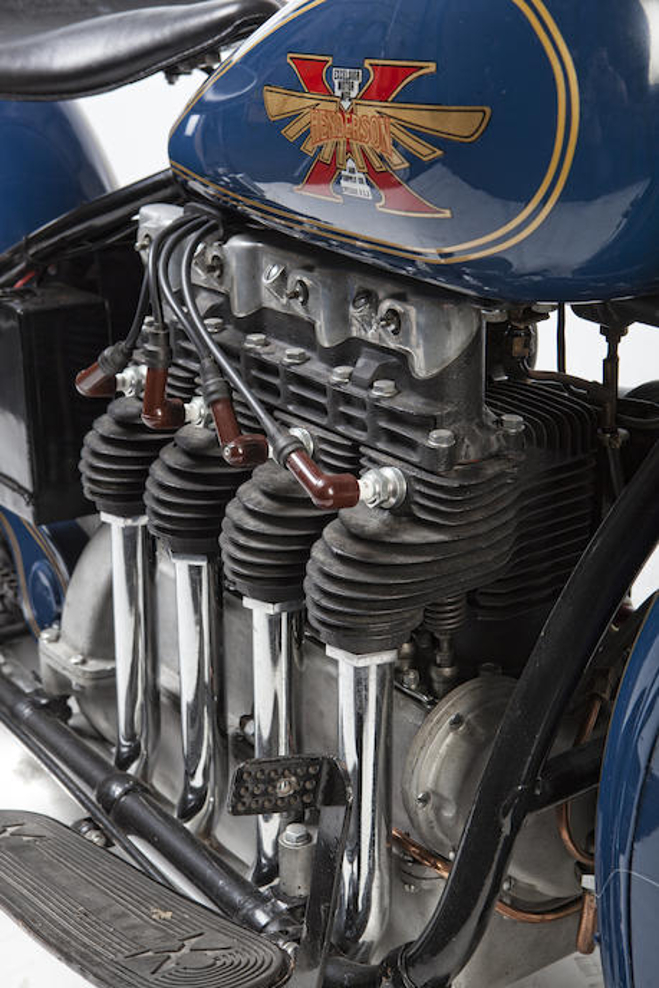 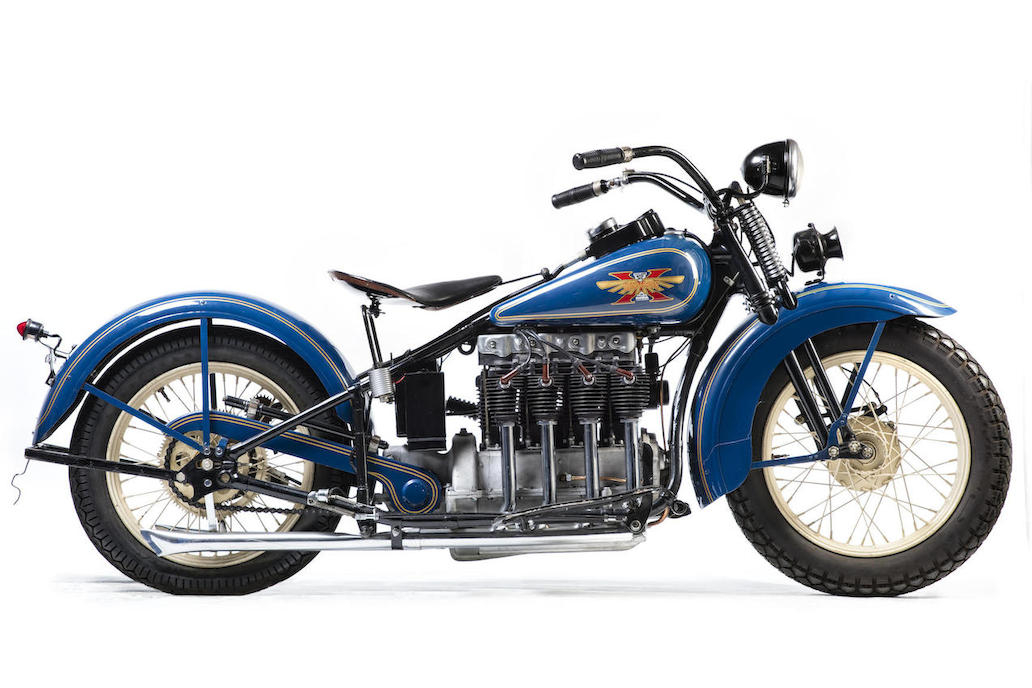 Right side view of the 1931 Excelsior-Henderson KJ as designed by Arthur Constantine from Harley-Davidson.

When his friend William Henderson was killed in a motorcycle accident in 1922 Arthur O. Lemon decided to leave Excelsior and move over to take charge of design at Ace Motorcycles in 1923. The Excelsior-Henderson continued to be improved however with a frame re-design in 1925 and in 1927 with Ricardo machined and polished cylinder heads.

The big change was to come in 1928 however when Ignaz Schwinn hired Arthur Constantine from Harley-Davidson as his new Chief Engineer. Arthur “Connie” Constantine evaluated the Excelsior-Henderson and decided to do a full new design to create a new bike. In its heart the new design still owed much to William Henderson and Arthur Lemon but with fresh design ideas from Arthur Constantine. This bike was the Streamline Excelsior-Henderson KJ of 1929 and the green motorcycle in our photographs is an example of this model. 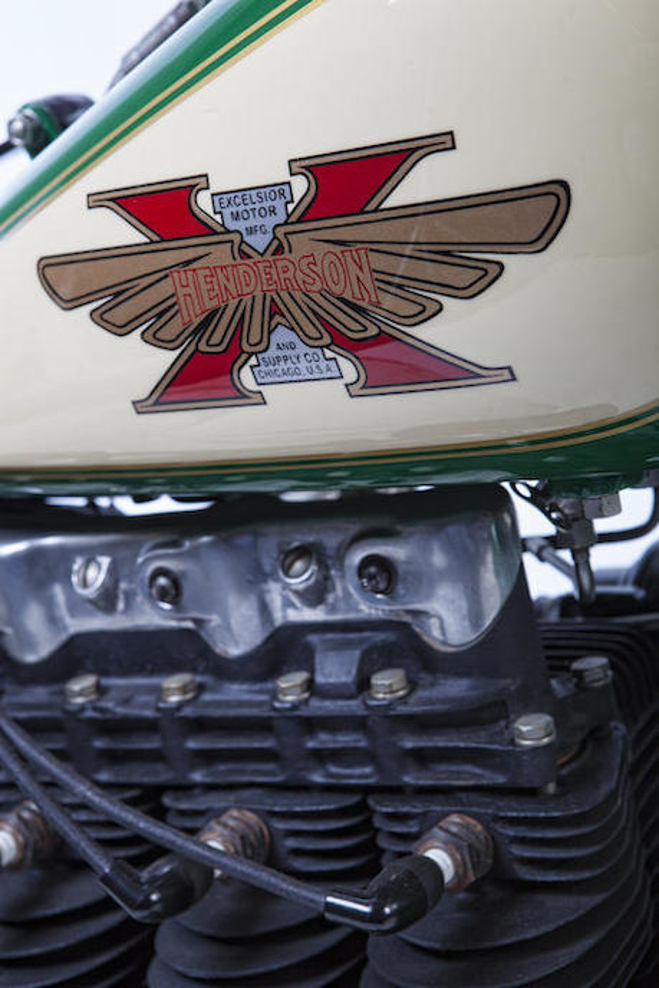 The 1929 Excelsior-Henderson is dubbed the “Streamline” and was the work of Arthur Constantine who had previously been with Harley-Davidson.

The 1929 “Streamline” KJ engine produced 40hp at 4000rpm and interestingly Arthur Constantine decided to revert to the William Henderson valve layout of overhead inlet valves and side exhaust valves. The KJ brought in strong sales and continued to do so even when the Great Depression began to bite in earnest. The design ideas of William Henderson and Arthur Lemon re-worked and melded with some new original thought by Arthur Constantine produced one of the greatest motorcycles of the twenties and thirties. By 1930 the power had been increased again to 45hp at 4500rpm and the top speed of the bike was in excess of 110mph. A special KL averaging 112.61mph.

Despite sales being strong Ignaz Schwinn decided that the Great Depression was going to be too great to survive in the long term however and unexpectedly in 1931 he told staff that the company was going to be closed. By September of that year Excelsior closed for good, but left a legacy of some of the greatest motorcycles created in the United States.

The two motorcycles in our pictures are two of those legacy motorcycles left to us of the generations that followed to enjoy and preserve.

The green 1929 Excelsior-Henderson “Streamline” KJ is coming up for sale on 19th September 2016 and you will find its sale page if you click here.

The blue 1931 Excelsior-Henderson KJ is a bike from the final year of production and you will find its sale page if you click here.

These two motorcycles come from the collection of Robert White which also includes an Ace and four cylinder Indian models both the inlet over exhaust and the “upside down” exhaust over inlet. In a sense these four bikes provide and instant collection of the development of the four cylinder American motorcycle. We hope they’ll all get to stay together.