The Lancia Artena entered production in 1931 whilst the effects of the Great Depression were still being felt and during Benito Mussolini’s fascist leadership of Italy. Benito Mussolini was intent on building a new Roman Empire and given that political environment Lancia’s choice of the name Artena for their new model car is curious, as was noted by a motoring writer of the time. The name Artena was a departure from Lancia’s established practice of naming car models after Greek letters. What is interesting about the name Artena is that, historically, it was a town of the Volsci people, who were amongst the most dangerous enemies of the emerging Romans back in ancient times. Whether or not there was subtle intention on the part of someone at Lancia in the 1930’s to convey a message in this name is unknown, but of all the names they could have chosen it is an interesting choice. The Roman general Caius Marcius Coriolanus, whose story is told by William Shakespeare in his tragedy Coriolanus was made famous because of his military campaign against the Volsci.

The name Artena aside the Lancia Artena is an interesting car in its own right. To describe the Lancia Artena as just an update of the Lancia Lambda, as some seem to do, is to do it injustice, and to do injustice to the Lancia Lambda at the same time. Although the Artena used an update of the same shallow 17° angle V4 single overhead camshaft engine as the Lambda, and used the same type of suspension, including brakes and shock absorbers, the actual structure of the car was not uni-body as on the Lambda, but had a novel design of chassis on which a custom body could be created by a coach-builder, so it was a completely different car. For the Lancia Lambda Vincenzo Lancia had envisioned using a uni-body, inspired by the structural rigidity of the hull of a ship, to create a strong but light body for his car. For the Lancia Artena he did away with this and moved to an innovative chassis design that would enable his customers to have a custom body created if they so chose, something one could not do with a uni-body. This was cause of considerable interest at the 1931 Paris Salon where Motor Italia commented;

“A particularly interesting exhibit at this year’s Motor Salon in Paris is the stand of Lancia & Co of Turin who are showing two new models, a 2 litre ‘four’ and a small ‘eight’ of only 2600 cc. Both these new chassis are of typical Lancia design, that is radically different from the ordinary run of cars. Like all Lancia models, and particularly the famous ‘Dilambda’, two types of which are also shown, the new chassis, distinguished by the somewhat peculiar but harmonious names of ‘Artena’ and ‘Astura’, display every sign of having been designed and built by a motoring enthusiast for car connoisseurs, and Vincenzo Lancia is nothing if not an enthusiast.”
(Motor Italia, October 1931)

It is evident from this that Vincenzo Lancia was highly regarded as a designer and engineer, and as a man with a passion for the cars he was creating. 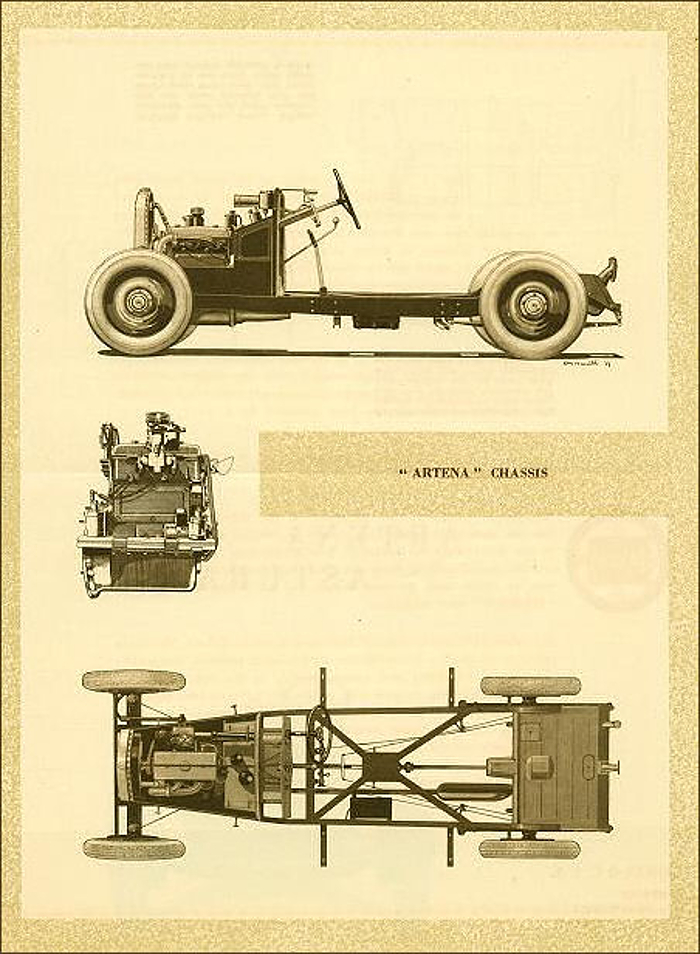 Suspension of the Lancia Artena was much like that of its predecessor the Lambda. The independent front suspension was by sliding pillars with coil springs, similar but not identical to that used on Morgans as the Lancia Artena has the sliding pillars attached to a solid axle attached to the chassis. The rear was a conventional live axle with semi-elliptic leaf springs. With the engine being mounted behind the front axle line the Artena was well balanced and praised for its lively handling. The brakes of the Artena, like the Lambda, were drums all around and the suspension featured telescopic shock absorbers/dampers on the independent front suspension and friction disc for the rear. Steering was by worm and roller.

So the Lancia Artena was a move away from the uni-body construction of its predecessor the Lancia Lambda and the structural advantages it provided, to a more solid and conventional method of construction that permitted a buyer to just purchase a chassis and have one of the custom coachbuilders create a body for it, thus providing creative advantages for Lancia’s customers. This was to work in the Artena’s favour as it widened the potential sales opportunities for the car and ultimately, during the war, for the car to be bodied in four body styles suited to military use, including as an ambulance.

The V4 engine and the method of mounting it in the Lancia Artena is interesting in its own right, the 17° “V” angle being sufficiently shallow that the engine was able to use a single cylinder head with a single overhead camshaft to operate the poppet valves on both banks of cylinders. The mounting of that 1.9 litre V4 engine on the chassis was also quite an elaborate affair to dampen out the natural imbalance of a fairly large four cylinder. The engine was mounted on four arms each on coil springs on Silentbloc bushings. This assembly was then mounted on short leaf springs attached to the chassis. The effect produced gave the engine a smoothness one might normally associate with a six or more cylinder engine. This mounting system was unique to the Artena at the time. The Artena’s bigger sibling the Astura with its smooth eight cylinder engine had no need of such engineering. That Lancia engineers would put in so much effort to create the best technical solution says something about the culture of the company. Lancia have long been renowned for excellence in design and excellence in engineering. For much of Lancia’s history their cars were pretty much hand made so there is quite a bit of subtle variation even in supposedly identical models. The Lancia Artena’s engine produced 55hp at 4000rpm, a high rpm figure for engines of that vintage. The engine was mated to a four speed manual gearbox with direct drive in top gear. Top speed of the car was claimed to be 115km/hr (71mph) 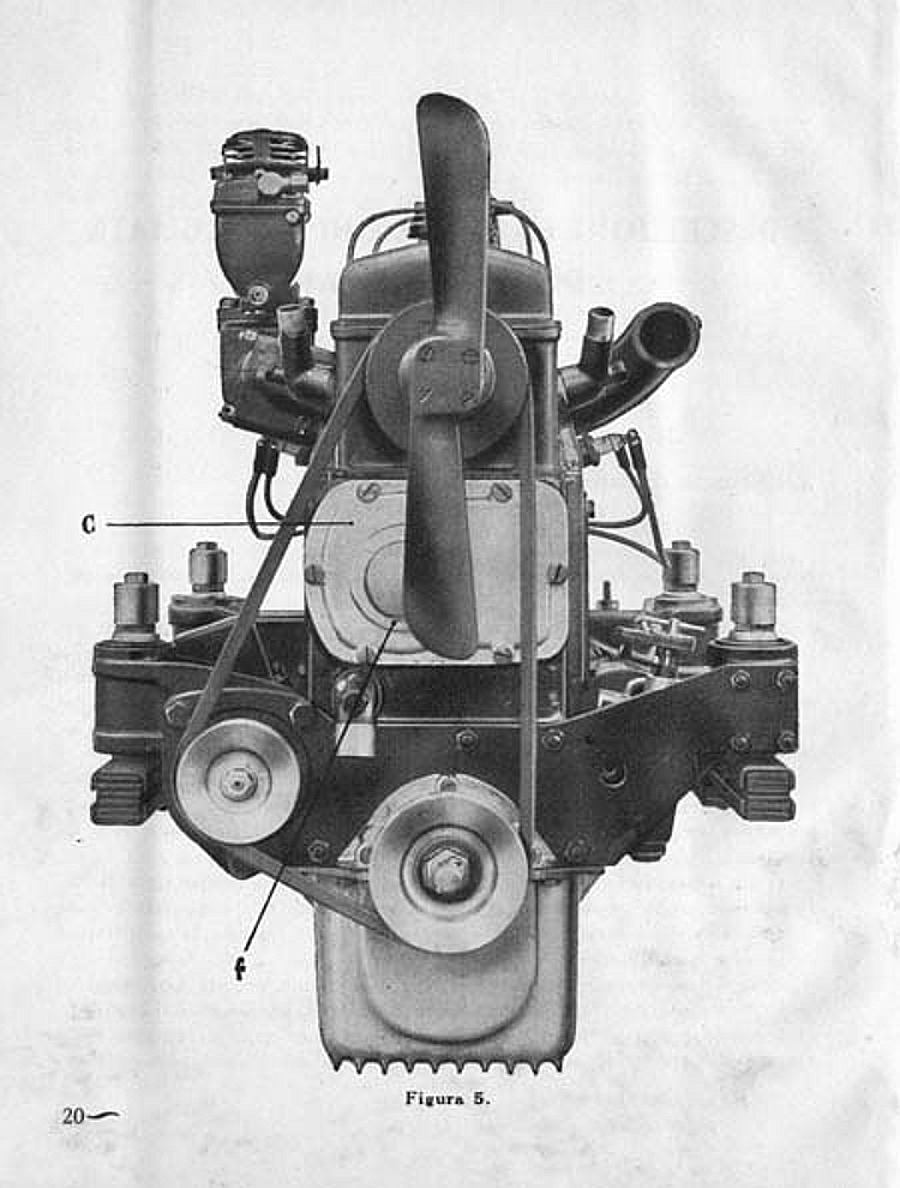 The Lancia Artena went through four distinct model series. The Series I which began production in September 1931 had a vertical front radiator grill and a shorter wheelbase of 2,990mm/117.7”. These were produced as four door saloons either seating four or six people. The Series II cars were in production between 1932-1933 and were little different to the Series I. The Series III cars had new bodywork including a slanted radiator grill and were available in two chassis lengths; the short at 2,950mm/116.1” wheelbase (Tipo/Type 228C) and the normal at 3,180mm/125.2” (Tipo/Type 228A). Lancia offered a four seater saloon on the short Tipo 228C chassis and a six seater saloon on the long Tipo 228A.

Custom coachbuilders for the Lancia Artena created a much wider variety of body styles than were available from the factory including cabriolets and faux cabriolets (i.e. cars that look to have a convertible soft top but in fact have a fixed roof that can’t be rolled back – reminiscent of the vinyl roof trend of the sixties), coupés, sports saloons and torpedoes depending on the customer’s desires. The names of these coachbuilders will be familiar to car enthusiasts and include Carrozzeria Touring, Pininfarina and Stabilimenti Farina, names associated with classic, and some not so classic cars of the post war era. There were other more commercially oriented coachbuilders such as Viotti who created commercial vehicles on the Lancia Artena chassis. The Series III cars remained in production until 1936 by which time 2040 had been built.

By the time the Second World War began the Lancia Artena had been out of production for a few years, but the needs of Italy’s military saw this flexible and reliable design put back into production. These are the Series IV cars. The Series IV had the normal wheelbase of 3,180mm/117.7” and were made in two chassis types, Type 341 for passenger cars and Type 441 which were ambulances. Of the Type 341 passenger cars there were three variations:
A “Berlina”; a six window saloon called Ministeriale for government duties.
A “Trasformabile 4 luci”; a four door convertible (coachwork by Viotti)
A “Torpedo trasformabile”; a four door saloon called Militare with a folding roof, for use as a military staff car.

The series IV cars had slightly de-tuned engines for enhanced reliability and to ensure their operation on the lower quality fuels that might be available in war time. 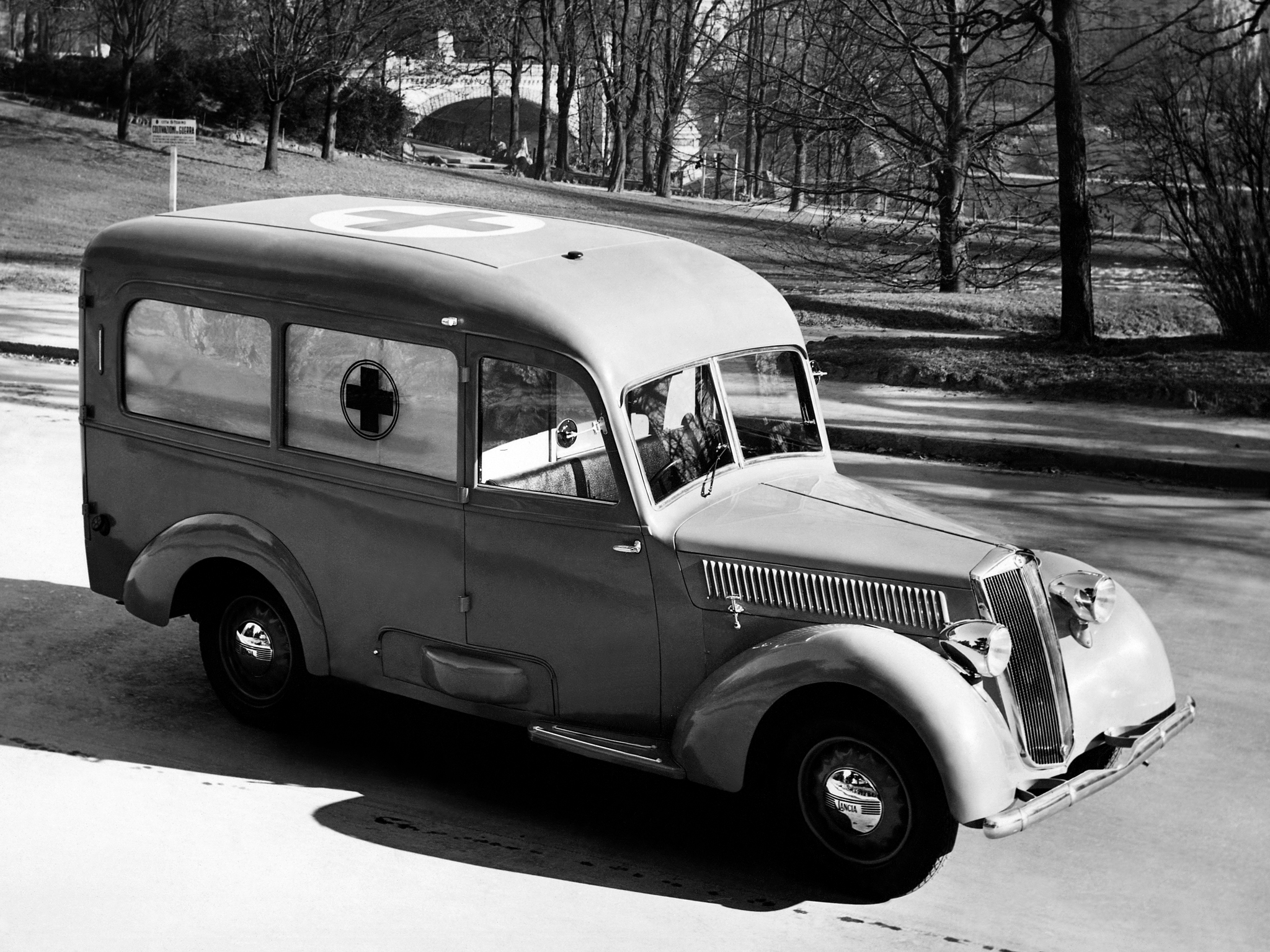 The Lancia Artena is one of the most successful models the company has produced. By reverting to a chassis instead of the uni-body of the Lambda the Artena was made more flexible, in short it was made a better sales proposition, as evidenced by its being called back into production in 1940 to suit the needs of Italy’s military, production that continued until 1942.

Bonhams will be auctioning a delightful 1933 Lancia Artena with custom faux cabriolet coachwork by Carrozzeria Farina on 4th February 2016 at their Les Grandes Marques du Monde au Grand Palais. This could be your opportunity to become the proud owner of one of the most successful Lancia models of the pre-war era.