Belgium has been a center of gun-making for a very long time and so there have been a large number of makers, many with patents registered in Belgium and Britain, and so there are a great many unusual arms made especially handguns. This is especially true for revolvers and one could create a fascinating and relatively affordable collection of Belgian revolvers.

One of the lesser known of the Belgian handgun makers was Jean Warnant but he was a creative designer and the British Thornton’s Patent for a double action revolver lock work was actually originally his idea for which he applied for a patent in Belgium in 1874 and that patent was granted in 1875. Jean Warnant had appointed a gentleman who styled himself as “Baron Thornton” whose real name was Amedee Thornton de Mouncie to obtain a British patent for his Belgian patented mechanism. “Baron Thornton” decided he would make some nice money if he simply applied for the British patent under his own name and proceeded to do that in 1876. He then had six prototype revolvers made by British gun-maker Scott and then he submitted them to the British Royal Small Arms Factory in London in 1877, although it seems these did not fully incorporate Jean Warnant’s patented lock work. The factory superintendent saw that the lock work could be improved and so he suggested to de Mouncie what should be done to make the design what it should be. Interestingly the improvement the superintendent suggested was what Jean Warnant had patented in Belgium and had commissioned de Mouncie to get patented in Britain. de Mouncie meanwhile managed to get a number of other people interested in investing in the patented design including a gentleman named Michael Kaufmann who purchased it from de Mouncie and patented it under his own name in 1878. This lock work was incorporated into an Enfield revolver but it was subsequently discovered that the British Patent was pre-dated by Jean Warnant’s 1875 Belgian patent. By this time de Mouncie had pocketed the money he had acquired from his scheme and vanished to parts unknown. No doubt he was keen to avoid having one of the people he had deceived from trying out their patented revolver on him. 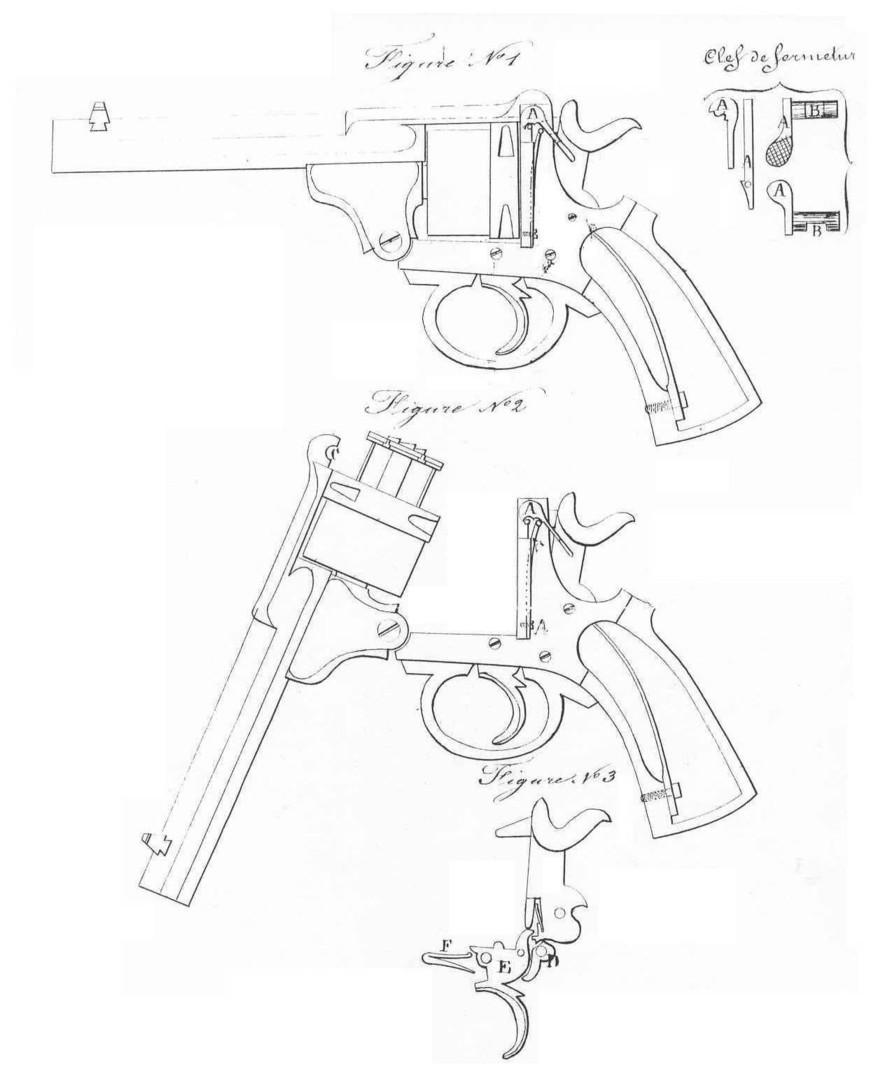 The Warnant revolver was similar to the Webley Pryse in being a top break double action which is opened by depressing a catch on the left side of the action inwards which released the locking lug at the top of the frame. the revolver could then be opened and the cases/cartridges ejected. The double action mechanism was simple with a non-rebounding hammer. The hammer could be placed on half cock, just like a Colt single action, or full cock for single action firing, or it could be used in double action mode.

The video below from Christian Uriarte’s YouTube channel shows the operation of this revolver.

The Warnant revolvers were made in various sizes and calibers including the .45 which were common for British military use. The design is very good and has a number of well thought out features. The top of the barrel is an inverted “V” shape providing a sighting line to the front sight, the rear top strap has a rear sight with a “V” notch and the hammer spur sits below that line of sight. This enables the shooter to consistently see the sights and to re-acquire a sight picture quickly. Opening the revolver for reloading simply requires the Pryse style release catch to be pressed inwards by the thumb whilst the non shooting hand jacks it open and inserts new cartridges. The pistol grip is also nicely shaped and angled to provide the shooter with a stable and comfortable grip. Looking at the design we can see that the designer was someone who did plenty of shooting and understood exactly what a practical revolver should be. 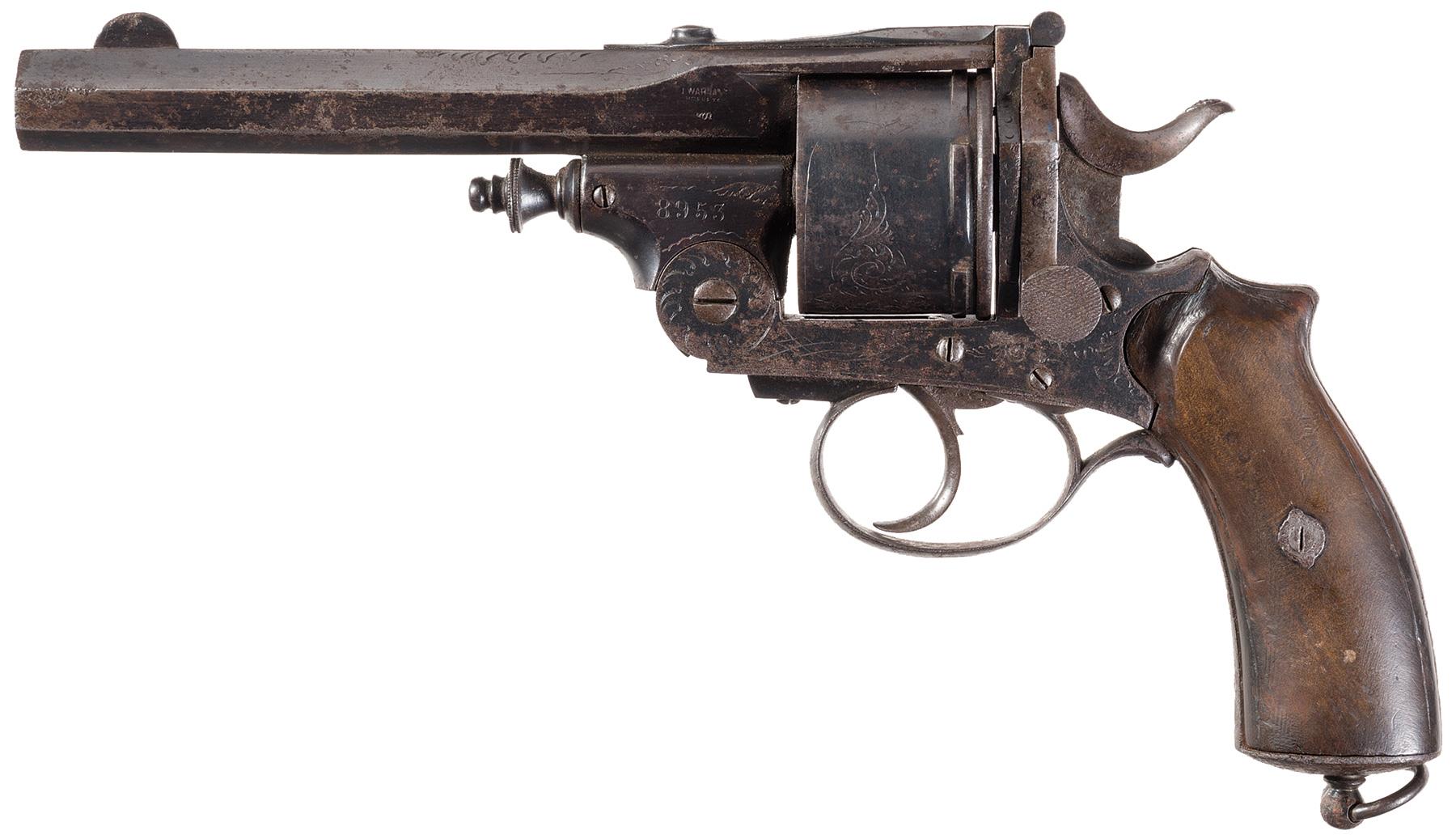 Left side view of the Warnant revolver. The top break release catch is large and sits in the most convenient place for the shooter’s thumb to operate; it is pressed inwards to open the revolver. (This picture and the image at the head of this post courtesy Rock Island Auction).

The revolver pictured above is coming up for sale by Rock Island Auction on June 24th, 2017.

Expected sale price of this unusual but excellent revolver is in the order of USD$1,100-$1,500

The condition of this piece is described by Rock Island Auction as follows: “OF – FAIR: some major parts replaced; minor replacement parts may be required; metal rusted, may be lightly pitted all over, vigorously cleaned; rounded edges of metal and wood; principal lettering, numerals and design on metal partly obliterated; wood scratched, bruised, cracked or repaired where broken.” 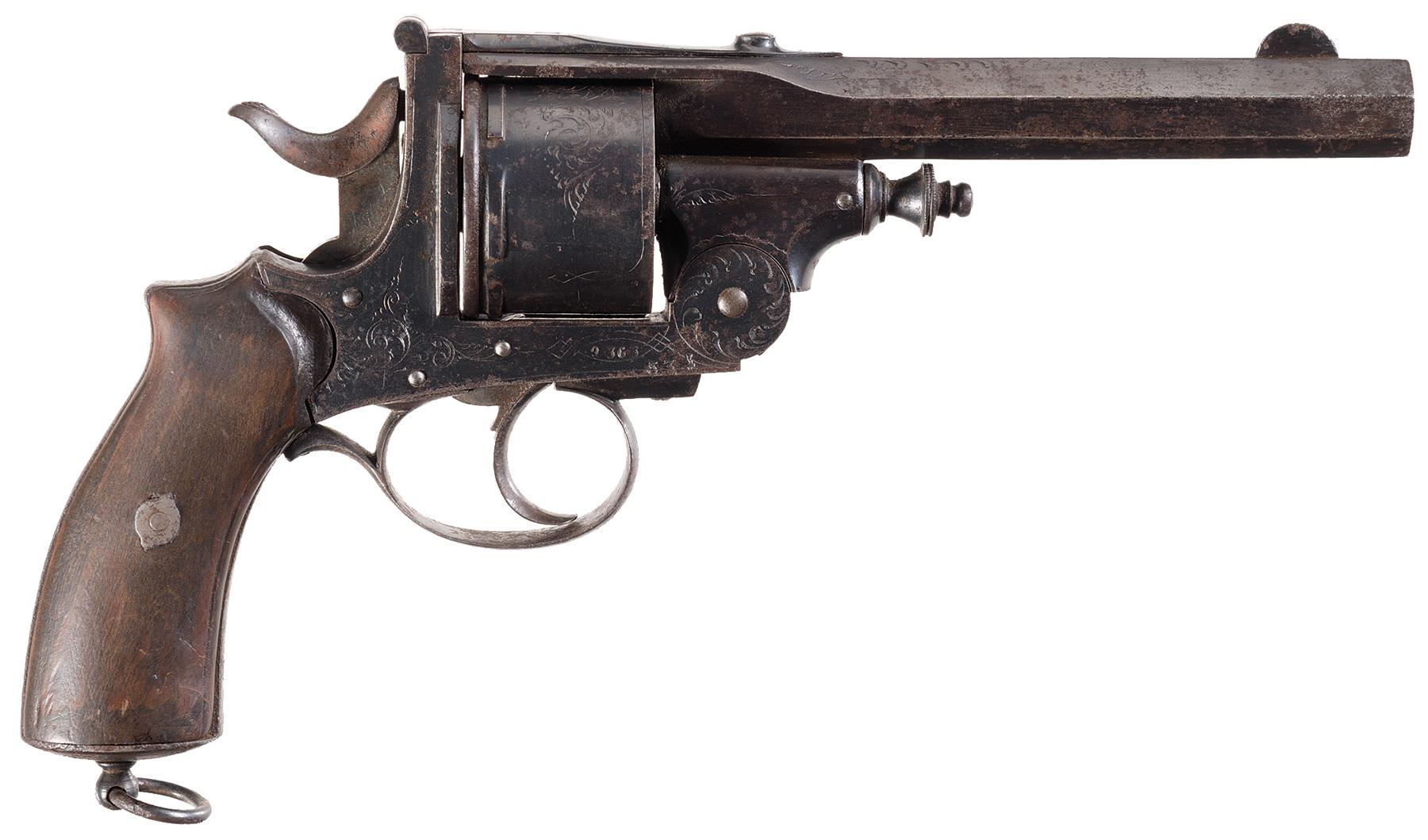