The Chevrolet Corvair Monza was to prove to be the best selling version of the Corvair and when it first appeared as the Mr. and Mrs. Monza show cars at the 1960 Chicago Auto Show and when it morphed into the Monza Spyder it garnered much interest later to be called “The poor man’s Porsche” by motoring writers. The Chevrolet Corvair had originally been the brainchild of Ed Cole, the Chief Engineer of Chevrolet’s Motor Division. This same Ed Cole was also responsible for the creation of Chevrolet Small Block V8 which did so much to turn the Chevrolet Corvette into a credible sports car. 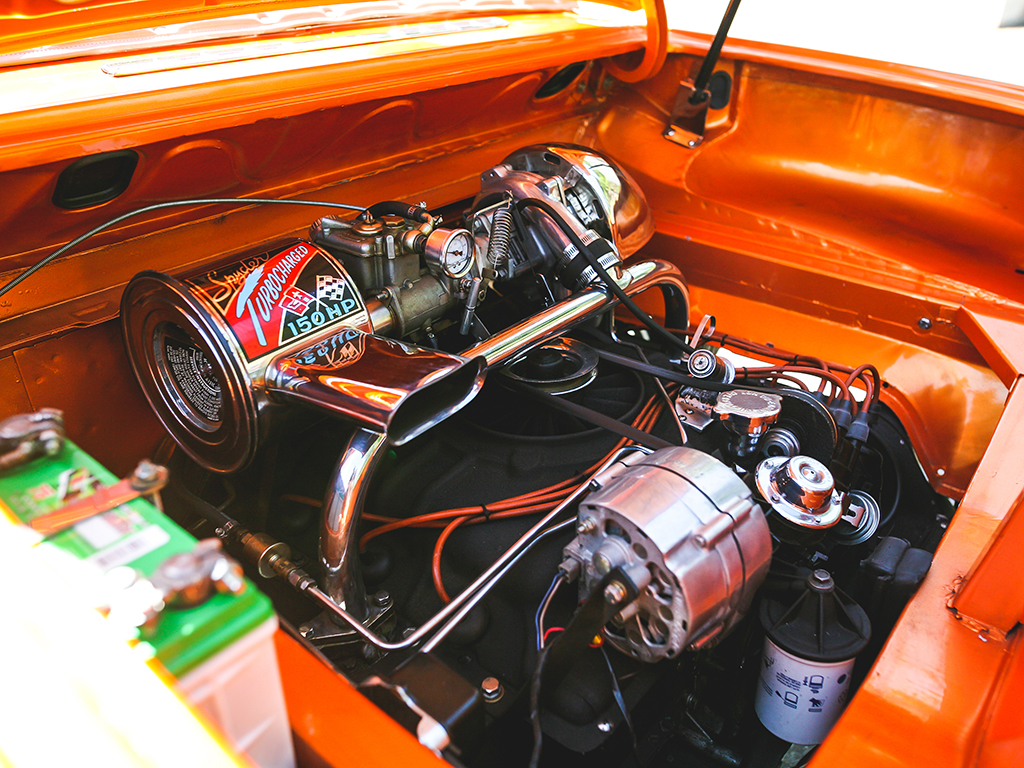 The engine of the Chevrolet Corvette Monza was a horizontally opposed flat six boxer engine initially with a capacity of 2.3 liters and increased in 1961 to 2.4 liters. The big difference in the Monza Spyder however was that it was turbocharged giving it 150bhp to deliver to the rear wheels.

The Corvair however was not originally marketed as a sports car like the Corvette but was originally promoted as a small economical car. Chevrolet did not have confirmation of the car’s potential as a sports car until the 1960 Corvair Monza show cars elicited such interest. The Corvair Monza was initially marketed with a relatively low powered engine the “Super Turbo Air” naturally aspirated and developing a modest 95hp @ 4,800 rpm and 125lb/ft torque @ 2,800 rpm, so certainly not a Corvette competitor but just a stylish coupé. In 1961 however Chevrolet decided that they would jump in at the deep end and offer a turbocharged version the Monza Spyder whose engine delivered a whopping 150hp. 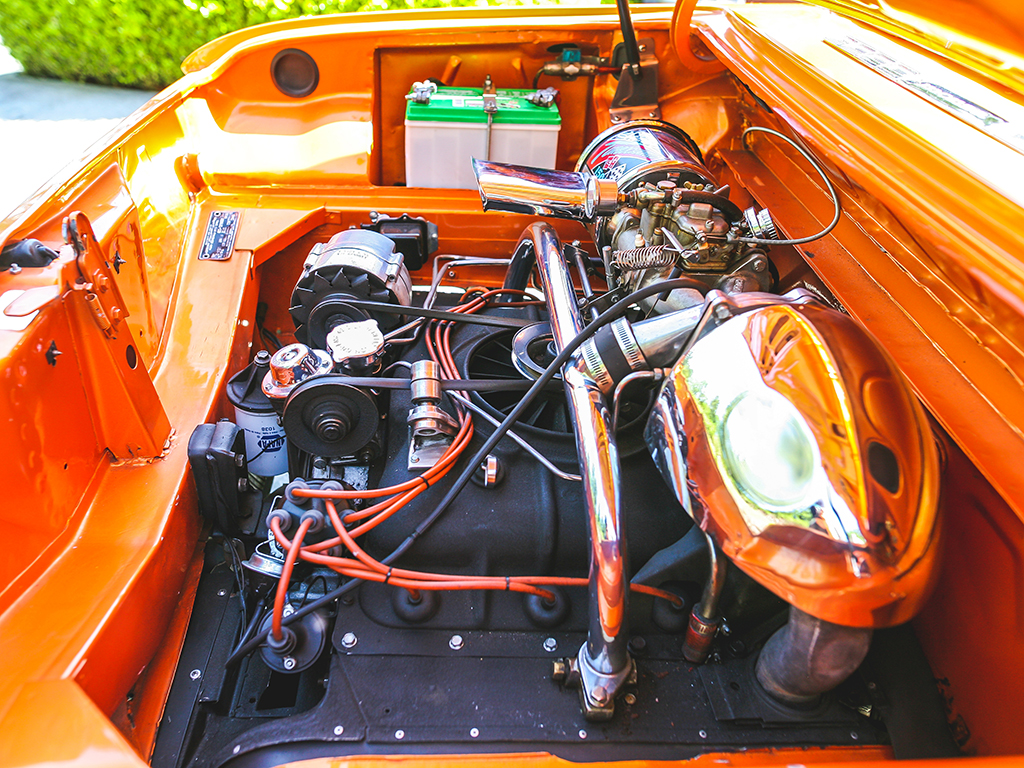 In order to turbo-charge the Corvair engine Chevrolet engineers had to do extensive modifications. The non-pressurized Carter side-draft carburettor draws its air from the air filter furthest away in the picture and then the fuel air mix is sucked into the turbocharger closest in the picture and then piped into the left and right intake manifolds.

It is likely that the motivation to turn the Corvair Monza into a “Poor man’s Porsche” was probably inspired by Ford’s decision to put a 260cu.in. V8 in their Falcon giving the car 164hp to motivate it along the highway. However, in order to re-build the 2.4 liter Corvair engine as a reliable and high powered turbocharged engine Chevrolet engineers had to do some major surgery to it. Starting with the basic Corvair boxer air-cooled six cylinder which had an aluminum case and cylinder heads with cast iron cylinder sleeves and pistons Chevrolet engineers knew that the greatly increased power of a turbocharged engine would require new stronger connecting rods and pistons, and a re-engineered crankshaft. Given the heat that would be generated in that air-cooled engine an oil separator was also fitted. The camshaft needed to be re-configured for the new style of combustion and the spark plugs also needed to be of a type capable of working in the much higher combustion chamber temperatures. As the engine was to be turbocharged the compression ratio was dropped from 9:1 to 8:1.

The turbocharger itself was by TRW and breathed through a non-pressurized Carter side-draft carburettor. It provided up to 10lb of pressure which is plenty for a road going vehicle. The turbocharged engine produced 150hp which is a 47% increase over its conventionally aspirated sibling and torque increased by 57% making this an engine with genuine sports car characteristics without the need for a V8. Because the Corvair Monza Spyder was quite lightweight the power to weight ratio was good and that was one of the principles that Ferry Porsche and his Italian friend Carlo Abarth sought to utilize in their exotic European sports cars. 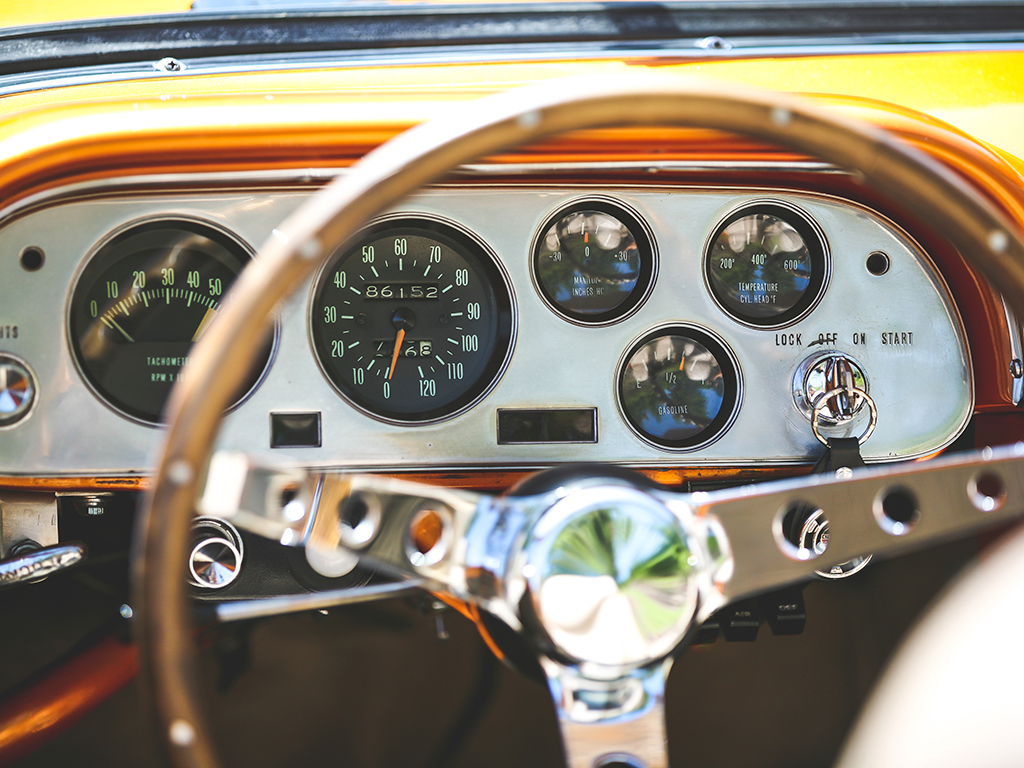 The dashboard of the 1961 turbocharged Corvair Monza features a tachometer to the left, speedometer graduated to 120mph at center, fuel gauge at right bottom, and two more unique gauges above it being the turbocharger manifold pressure gauge and cylinder head temperature gauge.

By this stage the Corvair Monza Spyder was being offered with a four speed manual gearbox instead of the three speed the original Corvair started out with; and it was of course fitted with more luxurious trim with front bucket seats, sports steering wheel, and an “engineer’s dashboard” that included not only a tachometer but also manifold pressure and cylinder head temperature gauges which, for these turbocharged cars, really made this car feel like a “Poor man’s Porsche“. Sales climbed in a most satisfactory way and GM realized that the Corvair Monza Spyder  was a stylish sports coupé with exciting performance and an interesting turbocharged engine fitted in a car that was a bit exotic being like a Porsche in its layout. Sales figures showed that GM had got the formula right and in this time when men would venture into space and walk upon the moon this was a futuristic car appropriate to its time. 39,808 Corvair Monza Spyders were built. 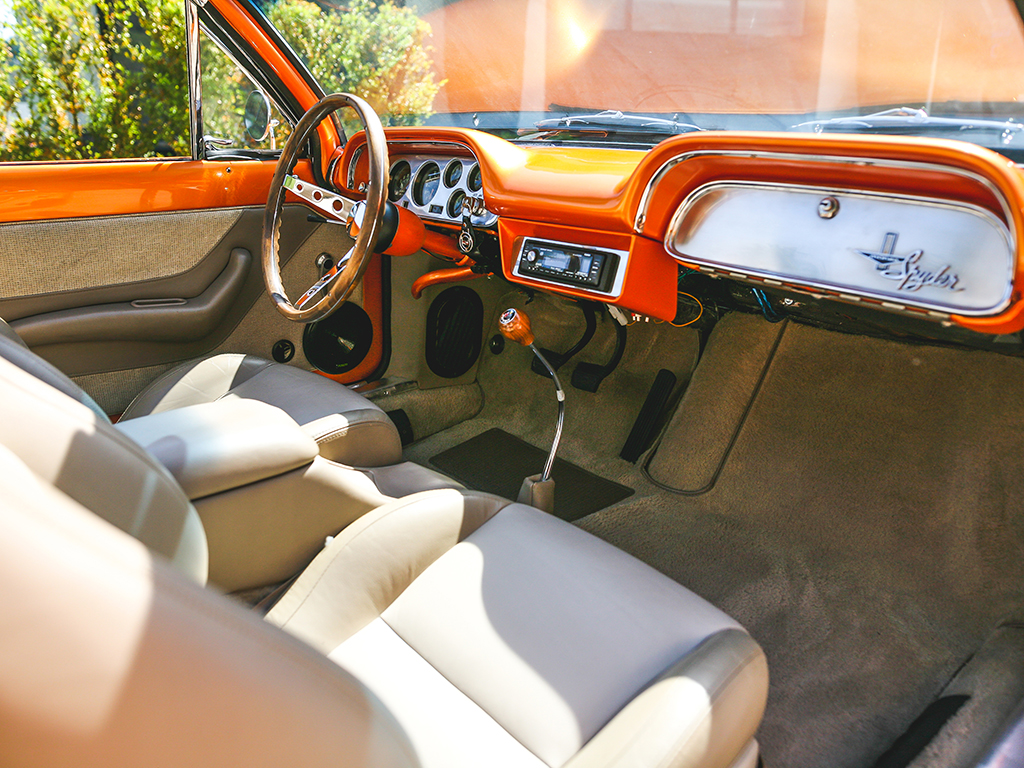 The interior of the Corvair Monza gives it the style of an expensive European import.

The flame orange somewhat modified Chevrolet Corvair Monza Spyder in our pictures is a gorgeous example of the car decked out as it should be with a few extra custom features that add to its exotic excitement. This “hot rod” version looks to be mostly original but with adjustable suspension, suicide doors with shaved door handles, and custom wheels and tires. The car is coming up for sale by RM Sotheby’s at their Santa Monica sale and will be offered on June 24th, 2017.

This is a nicely presented example of a Monza Spyder and it should turn out to be a car that is enormously enjoyable to own and to drive. 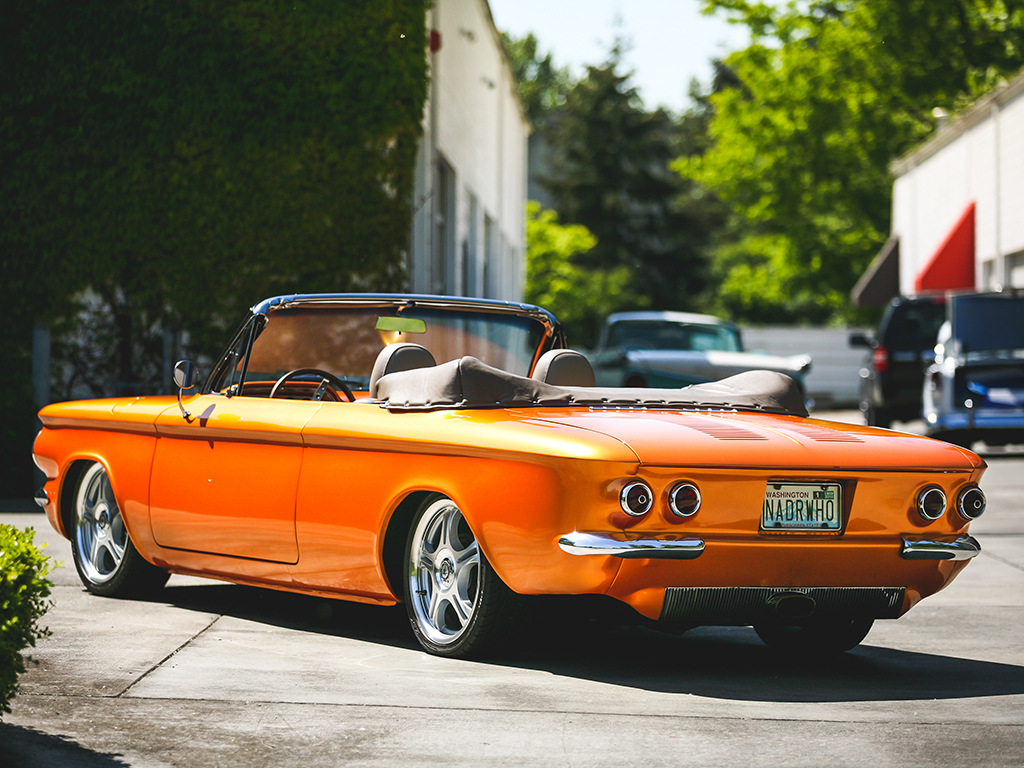 The license plate is NADRWHO so we wonder if the previous owner was a fan of the British TV series Dr Who.