It was called “The car with a hundred gears” although it actually didn’t require gears or gear changing at all. It was also described as “the easiest car in the world to drive” and it probably was. The DAF was not a car that got the sports car fraternity wild with excitement. It was not a car that got anyone excited and if you were at a party and wanted to name drop the brand of your car it would sound impressive to say “Oh I have an Alfa” or even better “I have my Ferrari outside” etc. But to say “My DAF is parked in the driveway” just doesn’t grab people’s attention, which is a shame really because it was one of the most unusual yet practical motor cars ever created.

The DAF was a small car made in the post-war era in Holland and it was built to be the most practical and easy to drive little piece of transportation on four wheels. DAF stands for “van Doorne’s Automobiel Fabrieken” and the company was started by the van Doorne brothers in the twenties making semi-trailers for trucks in the early days of the European truck trade. By the end of the Second World War DAF were making trucks to pull their semi-trailers and decided to move into small and practical car production. With fuel prices and legal costs associated with owning a car in Europe rather high DAF decided that a small and easy to drive car would have the best chance of success. Renzo Rivolta of Iso fame had a similar idea when he created the Isetta bubble car that BMW put into production. In the fifties and sixties people were beginning to worry about the world’s oil supply running dry and the Morris Mini became such a fashion hit that George Harrison of the Beatles was driving one.

DAF’s first car was the DAF 600 and it made its debut at the Amsterdam Motor Show in 1958. The DAF 600 had a 590cc air cooled boxer engine mated to the original DAF Variomatic transmission. In 1961 the DAF 600 was superseded by the upgraded DAF 750 Daffodil which had the same engine but with an increased bore for increased capacity. The DAF 750 Daffodil was powered by the same air cooled horizontally opposed “boxer” engine now of 746cc capacity which produced a not at all neck snapping 22hp. What sets the DAF apart however was its transmission. DAF used a unique constantly variable transmission that used belts on tapered pulleys to provide an infinitely variable set of gear ratios, hence the sales slogan “The car with a hundred gears”.

To achieve the automatic operation of the belt system the DAF used centrifugal force created by engine speed plus engine manifold vacuum. So the system was entirely mechanical and proved to be very reliable. An additional plus for the system was that if you had accelerated up to the car’s top speed of around sixty or so miles per hour if you lifted your foot off the accelerator the engine vacuum would cause the transmission to go up to its highest “gear” and the car would continue to pick up speed until it was doing around 70mph (110km/hr). DAF also designed the transmission to provide engine braking as one gets on a manual transmission car. A switch on the dashboard allowed the driver to reverse the effect of the vacuum to effectively use the transmission as a brake. Transmission braking was an excellent safety feature; we need to remember that cars of this vintage had single circuit hydraulic brakes and most were still being fitted with drum brakes front and rear. So brake failure was a real possibility if there was a leak in the hydraulic system and drum brakes can be prone to fade, especially on long downhills.

You will note in the picture above the DAF used two independent belt and pulley transmissions, one for the left and one for the right side of the vehicle. This served two purposes; one was to allow the inner wheel in a corner to rotate at a slower speed than the outer obviating the need for a differential, the second was to provide back up in case one belt failed so the car could still be driven.

The 750cc capacity of the DAF Daffodil might be small by US standards but was comparable with small cars from Britain, such as the Morris Minor with its original 918cc side valve engine, the Austin A30 with its 803cc engine, and the French Renault Dauphine with an 845cc engine. The DAF was kept minimalist to make it affordable yet of excellent quality so the interior trim was modest but with good longevity.

The DAF Daffodil was given slightly more “luxurious” trim than the base model 750, although as can be seen in the above picture we are not looking at Jaguar level “luxury”.

The DAF was a very easy little car to drive and perfectly suited to new drivers and to women drivers who, in the fifties and sixties, were inclined towards smaller cars that were easy to drive. The DAF not only has its transmission to make it easy to drive but you will notice that the wheels and tires were kept small and light to make changing a flat tire more easy.

The 1962 DAF 750 Daffodil in our pictures is a nicely restored example that is coming up for sale by RM Sotheby’s at their Arizona auction to be held 19th-20th January 2017.

This is an affordable classic car that is in good drive-able condition. It would make a neat car for getting around on one’s property or for trips to the shops, or for a learner driver, or simply for someone who wants easy to drive economical transport. The DAF is perhaps one of the best designed cars for “Getting from A to B” ever created, and its mechanically fascinating as well. For a collector of the small cars of the post war era A DAF is a must have conversation piece. 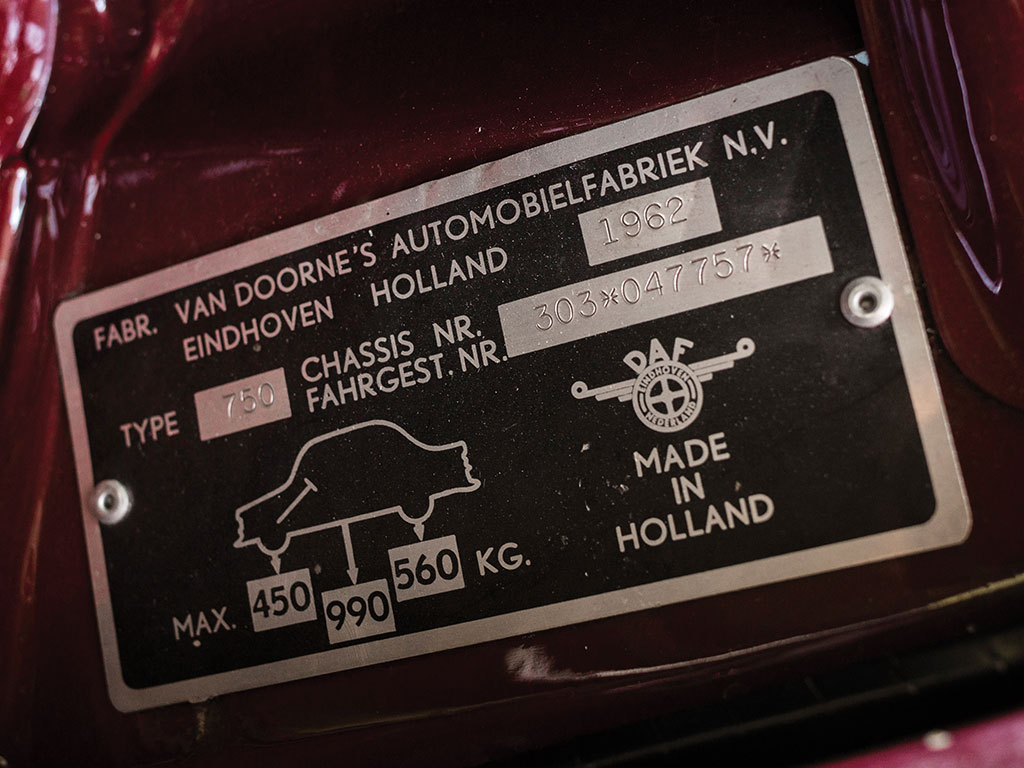