When it comes to choosing a shotgun my personal preference tends towards the side by side double. The reason for this may seem a little unusual. I am right handed but was born with a dominant left eye. When I first started shooting it was primarily pistol shooting and no-one noticed that I was aiming with that dominant left eye though holding the pistol in my right hand. Moving to rifles with telescopic sights tended not to be difficult, but when I finally discovered shotgun shooting, especially trap and simulated field, the wrong eye dominance made life rather more difficult than it should have been. The factors that really helped ameliorate the difficulties were first to re-train to use my weaker right eye to sight, and to get a decent fitting side by side double barrelled shotgun simply because the side by side creates a broad and dominating sighting plane which can help the right eye take over. 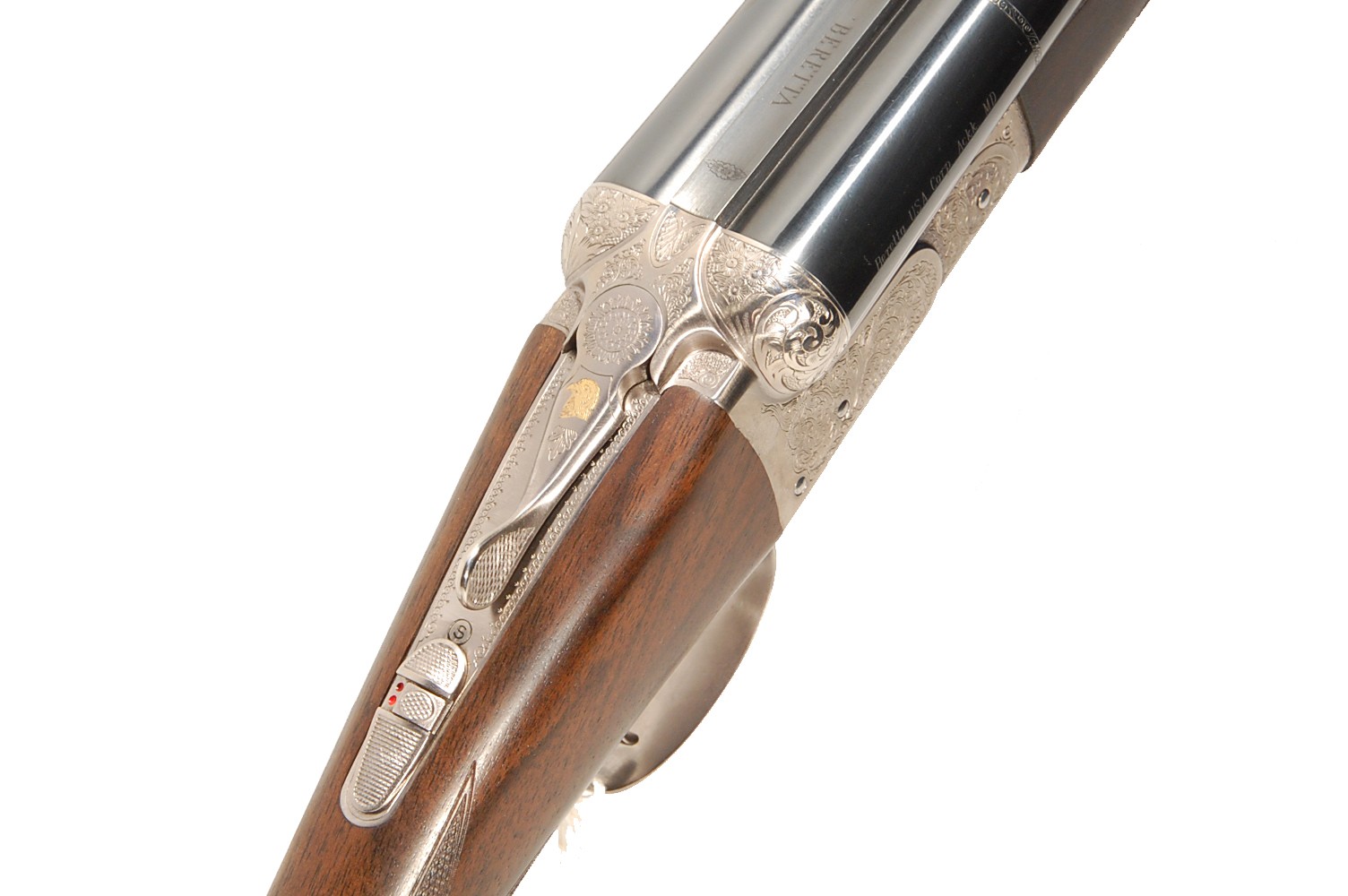 So although the over and under shotgun has tended to dominate trap and skeet competition for the last few decades, and Beretta’s line up of shotguns favours the over and under, yet there are those of us who much prefer the side by side, perhaps for reasons such as mine, perhaps for other reasons. Thankfully the shooting sports have plenty of room for those of us who just don’t go along with the majority.

The various models of the Beretta Silver Hawk 471 range. (Picture courtesy Beretta). Note: to see the image in more detail and to read the text click on the image.

An example of a Silver Hawk EL with the gold ducks on the false side plates. (picture courtesy rockislandauction.com).

The Silver Hawk was available with either a single selective trigger or double triggers, and could be had in a variety of barrel lengths as follows:-

Barrel lengths 22″ or 24″, Choke specifically for slug use.

A useful feature of the Beretta Silver Hawk 471 was a switch under the fore-end which allowed the shooter to activate or de-activate the selective ejectors. A feature that is very handy for those who like to re-load their own shot-shells for example.

The Beretta Silver Hawk 471 was an imaginative and highly practical effort to create a side by side shotgun that could be quite literally all things to all men. One could purchase a Silver Hawk with two or three barrels, one of which could be a slug barrel, and use the same gun for ducks, trap and simulated field, deer and wild pigs. The design concept wass simple, practical and unusually flexible, enabling the owner to create a genuinely multi-purpose gun.

This is a gun that I for one would love to own, set up with a 28″ barrel with fixed modified and full chokes, a 26″ barrel with the interchangeable “Optima” tube choke system, and a slug barrel. I don’t think I’d need another shotgun.

Though it is currently out of production I for one hope that the Beretta Silver Hawk 471 with its brilliantly conceived flexibility re-emerges in years to come.

A thing of beauty is a joy forever. (Picture courtesy rockislandauctions.com).