Depending on your hunting experience, many will not really see the point in a powerful handgun cartridge. For me the changeover point came whilst pig shooting where we had a mob of pigs retreat into really heavy cover: cover so thick you needed your hands to move brush aside just to get through it. At the time I was armed with a Remington 870 pump action with a 20″ barrel and it felt long and awkward. I found myself wishing for a .44 Magnum revolver. In fact what I think I would have wished for, if it had been invented back then, would have been a revolver that could deliver the sort knock-down power of the 12 gauge with slugs. It hadn’t been invented back in the 1970’s, but it has now, and it’s called the .500 Smith & Wesson Magnum. 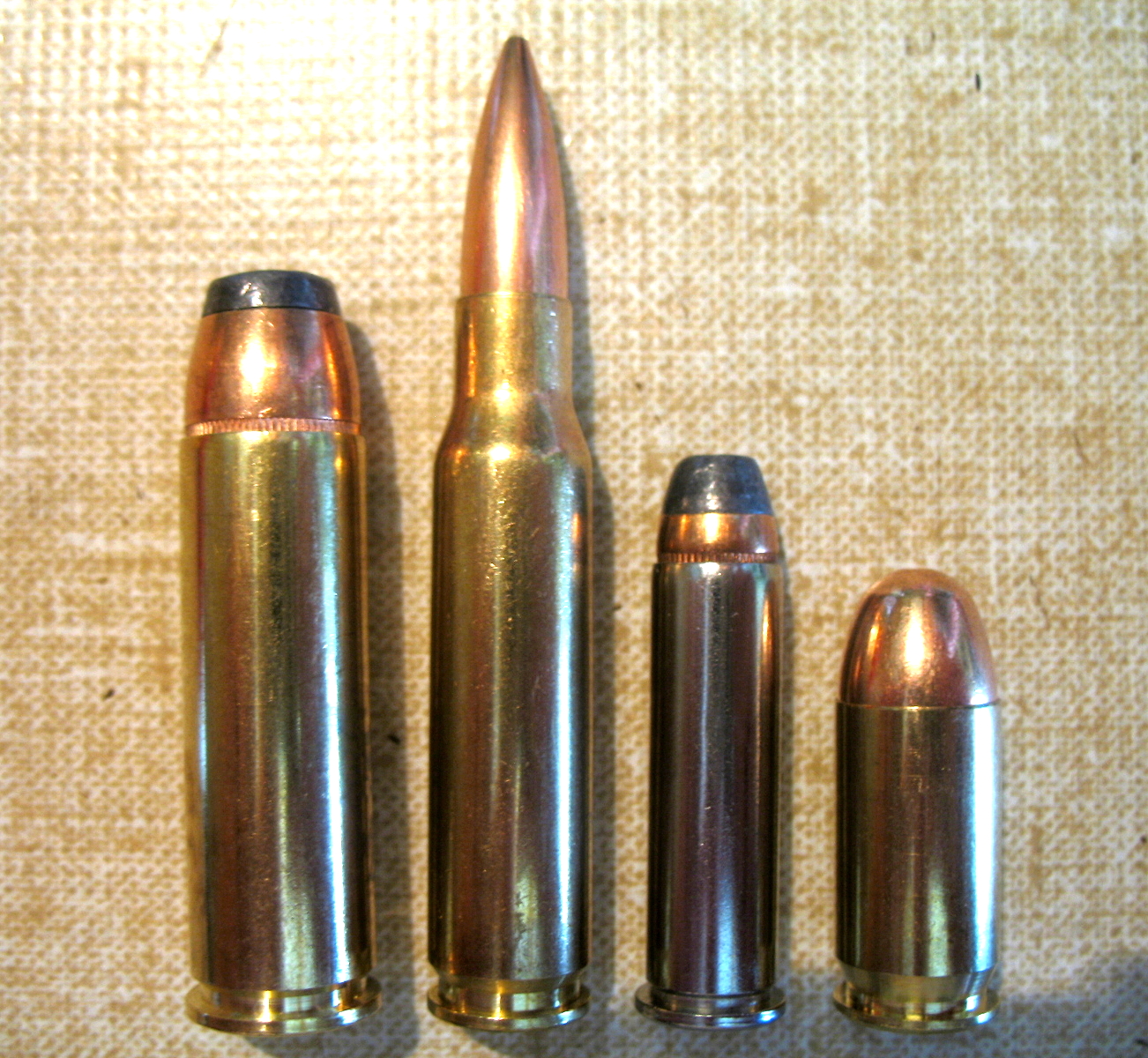 The .500 Smith & Wesson Magnum will seem like an enigma to many: it’s a cartridge that would seem to be more at home in a short light carbine rather than in an oversize revolver, but it is equally at home in both, and it is by no means overpowered for the tasks it was designed for: although when you first shoot one it surely needs a firm grip, and preferably forearms like Popeye the Sailor Man to keep the recoil under control. Recoil is not a good indicator of the actual power of a cartridge however, because it depends on the physical weight of the firearm you are using, and felt-recoil also depends on the stock design (especially for a carbine), and how we perceive it. 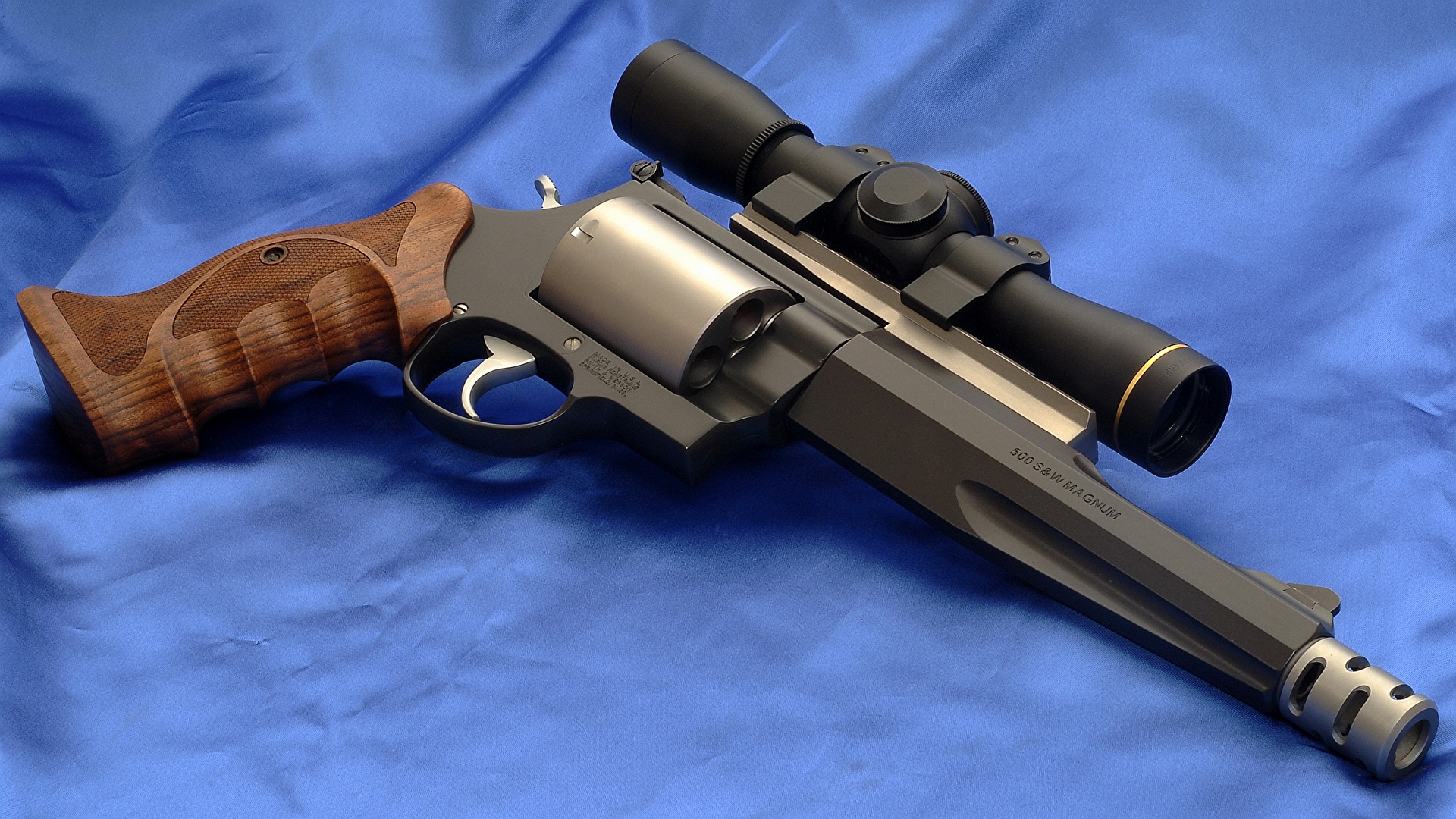 To put the .500 Smith & Wesson Magnum into perspective let’s compare it with two common full size big game rifle cartridges; the .300 Winchester Magnum, at it’s best on deer and wild sheep out to extended ranges; and the .458 Winchester Magnum, one of the world’s standard cartridges for dangerous game.

Although the math can’t completely predict the humane stopping power of a bullet it does give us a way to get an idea of how these cartridges compare. Because energy arguably over emphasizes the influence of velocity, a high velocity cartridge such as the .300 Winchester Magnum looks to be more powerful by comparison with a lower velocity bullet that is heavier and has a larger frontal area. Momentum is not a perfect measure either but it shifts the equation favoring bullet weight over velocity. From the table above we can surmise that the .500 Smith & Wesson Magnum is going to provide short range stopping power similar to that of the .300 Winchester Magnum and probably somewhat better. It can also be surmised that the .500 Smith & Wesson Magnum is not going to approach the stopping power of the .458 Winchester Magnum. So, looking at those figures, if I’m going on a hunt for elephant, hippo or Cape Buffalo I’m going to reach for the .458 Winchester Magnum. The .500 Smith & Wesson Magnum provides a lot of power and would likely be enough gun for certain dangerous game, and certainly sufficient for the big bears and any North American game species. It is without doubt a lot of gun in a surprisingly small package, and it is a cartridge that provides a great deal of stopping power in either a very large revolver or a light and convenient carbine.

For those who are looking for life insurance in bear country this is a cartridge that would be hard to beat. 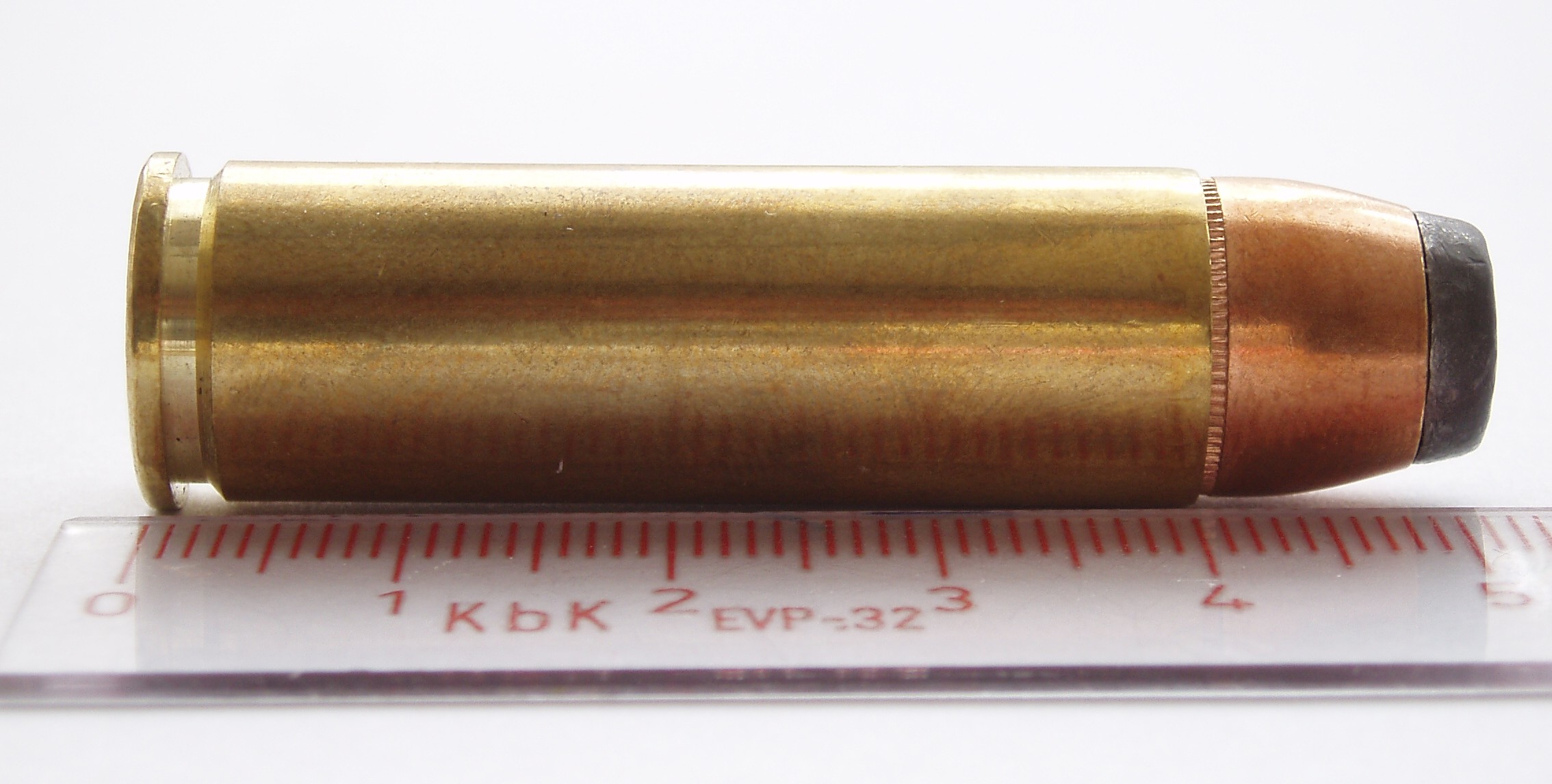 The .500 Smith & Wesson Magnum began life after the .500 Action Express entered production in 1988, and the .454 Casull in 1997, thus ensuring that Smith & Wesson’s .44 Magnum of Dirty Harry fame was no longer the world’s most powerful production handgun cartridge. Although it is true that few people who actually fire a full charge load from a .44 Magnum ever express the desire for something more powerful, there were a small group who did. This led to various wildcat cartridges being created and in response to them the .50 Action Express. 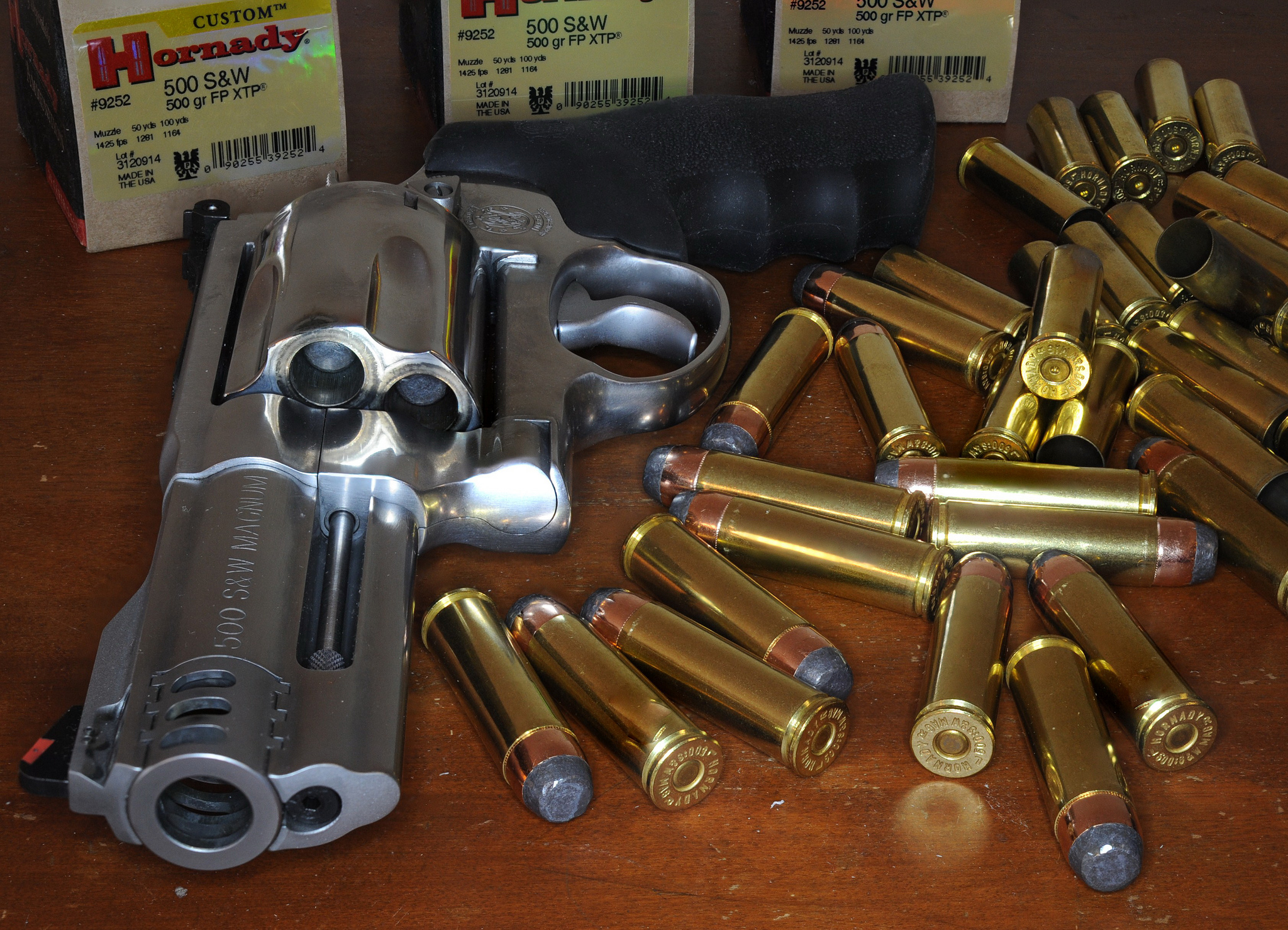 The .500 Smith & Wesson Magnum might best be regarded as the revolver equivalent of the British double-rifle .600 Nitro Express. It’s at the top end of what a human being can manage to fire without injury. (Picture courtesy thatdaveguy.com).

The .500 Smith & Wesson seems to have achieved respectable sales because there was a seasoned population of handgun hunters who had been looking for a revolver just like this. A revolver with which one could safely hunt moose, American Bison, the big bears, and pretty much anything in North America or Canada. It also provided a convenient handgun for people camping in areas where lethal protection against bears was needed: and it is far more convenient to carry than a shotgun or rifle.

The design of the .500 Smith & Wesson has clearly been done to make it suitable not only for revolvers and single-shot rifles, but also for lever action, bolt action and semi-automatic rifles. The case design is a semi-rimmed type (as is the .38 Super for example). With this design the semi-rim provides positive headspacing whilst also being small enough to feed smoothly in a tube magazine, and which should also facilitate good feeding in a box magazine. Case length is 1.625″ (41.28mm) but the standard chamber is designed to accommodate long heavy bullets out to a maximum cartridge length of 2.25″ (57.15mm). In terms of its ballistics it is  similar to Teddy Roosevelt’s favorite “lion medicine” the .405 Winchester, but able to use much heavier bullets. The design has been well thought out, the cartridge has been made highly adaptable.

(Note: you can find the above pictured revolver for sale at Doctor Deals if you click here).

Reloading for the .500 Smith & Wesson Magnum is not difficult, but be aware that this cartridge needs large rifle primers not large pistol primers, despite the fact that it is a revolver cartridge. Permissible breech pressures are up to 60,000psi which is more than either the .300 Winchester Magnum or the .458 Winchester Magnum generate, so large rifle primers are necessary to withstand the high intensity rifle pressures created. Most load data and factory ammo do not exceed 50,000psi, leaving a sensible safety margin. There is a good range of bullets available for this cartridge such as the Woodleigh 400gn FN SN (Flat Nose Soft Nose). An example starting load for this bullet is 36.5gn H4227 (AR2205) for a velocity of 1,585fps, and a maximum load of 39.5gn H4227 (AR2205) for a velocity of 1,695fps (10″ barrel with a 1 in 18″ twist). (Source Woodleigh Bullets Loading Manual). 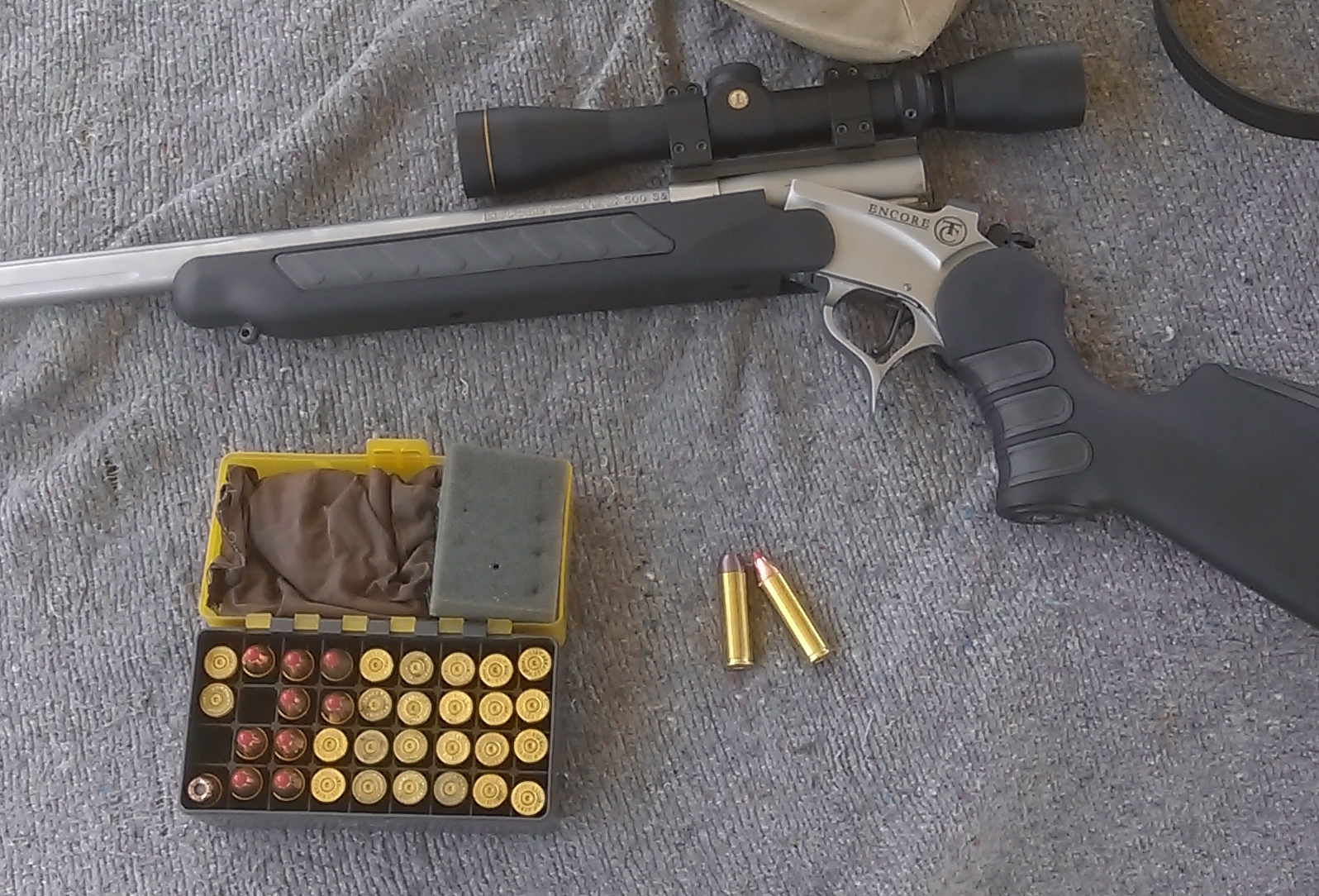 The Thompson Center Encore Pro Hunter Katahdin carbine weighs 7lb and has a total length of 34.5″ with the standard 20″ barrel.

The Thompson Center Encore Pro Hunter Katahdin carbine was designed for hunting moose in the cedar swamps of Maine. It is a superb single-shot light carbine with a simple and safe break-action. This rifle is available in 45-70, .460 Smith & Wesson Magnum, and .500 Smith & Wesson Magnum. If you intend to use a rifle-scope with a standard eye relief such as the Leupold pictured above we recommend fitting a rubber eye-piece cover such as the Leupold Alumina Rubber Eyepiece Guard – Standard EP. The .500 Smith & Wesson Magnum makes the Thompson Center carbine jump with sufficient force that it will give you a neat “magnum eyebrow” if you forget to hold it firmly enough, or are shooting at an uphill angle.

The Harrington & Richardson Handi Rifle is an economical way to get .500 Smith & Wesson Magnum power in a carbine. (Picture courtesy Harrington and Richardson).

The Harrington & Richardson Handi Rifle is available in .500 Smith & Wesson Magnum and provides an economical way to get the power of that cartridge available to you for your hunting, or hiking and camping protection. As a tool for putting meat on the table, or dealing with difficult bear situations, this carbine might be just what you are looking for. The Handi Rifle is single-shot and uses a simple and safe break action with an external hammer.

The Harringon & Richardson Handi Rifle has an MSRP of USD$270. 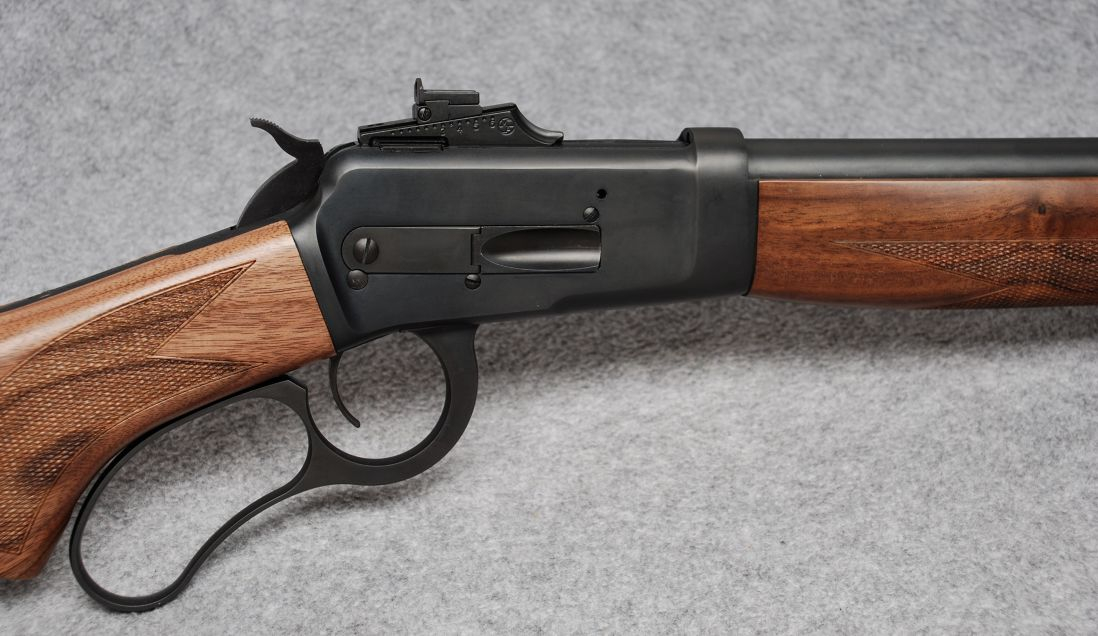 The Big Horn Armory Model 89 lever action carbine in .500 Smith & Wesson Magnum is a top-shelf rifle with a price tag that befits this beautifully made carbine. The design of the Model 89 is well thought out with a straight stock to tame the recoil into the shooters’s shoulder and a hand filling fore-end to provide a good grip on this hard recoiling rifle.

Big Horn Armory provide a wide range of options for the Model 89 including blued or case-hardened finishes, and stainless steel carbines. 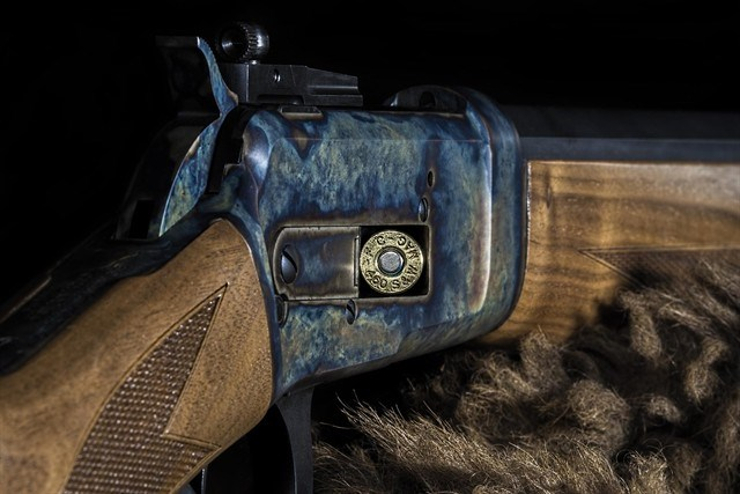 You will find the Revivaler review of this rifle if you click here.

The available range of rifles and carbines in .500 Smith & Wesson Magnum is quite limited at the time of writing. This is a bit disappointing and we hope to see more manufacturers start producing carbines for this quite fantastic cartridge. In a very lightweight carbine, say down around 5.5lb, recoil is certainly brisk. But in a heavier rifle the recoil would be tamed down nicely. A couple of excellent candidates for this cartridge would be the Ruger No. 1 single shot, or the Ruger M77 which is currently offered in .44 Remington Magnum. Fitted with a 20″ or 22″ barrel of decent weight such a rifle would tame the .500 Smith & Wesson Magnum nicely and would be a superb woods rifle capable of cleanly taking any North American game animal. Ballistically the .500 Smith & Wesson Magnum is very similar to the old 50/90 and 50/140/3¼”, whilst being dimensionally similar to the 50/70. It provides an excellent amount of power, albeit not in the .458 Winchester Magnum class, and in a rifle of appropriate weight (around 8lb for example) with a 22″ barrel could become a comfortable rifle to shoot, much like the 50/90 and 50/140/3¼”. An 8lb rifle with a 22″ barrel firing a .500 Smith & Wesson Magnum loading using a 500gn bullet backed by 32.2 grains of H4227 (AR2205) powder would propel the bullet at about 1,400fps and produce 25 ft/lb recoil energy, which is the same recoil energy as a 30/06 firing a 220gn bullet in an 8lb rifle.

The .500 Smith & Wesson Magnum has acquired a reputation for having quite savage recoil, and in a revolver or 5.5lb carbine that is very much the case. But it is easy to tame the savage beast by using it in a slightly heavier rifle, to create one of the best woods rifles, capable of cleanly taking any game in North America or Europe out to 100yards/meters or so. 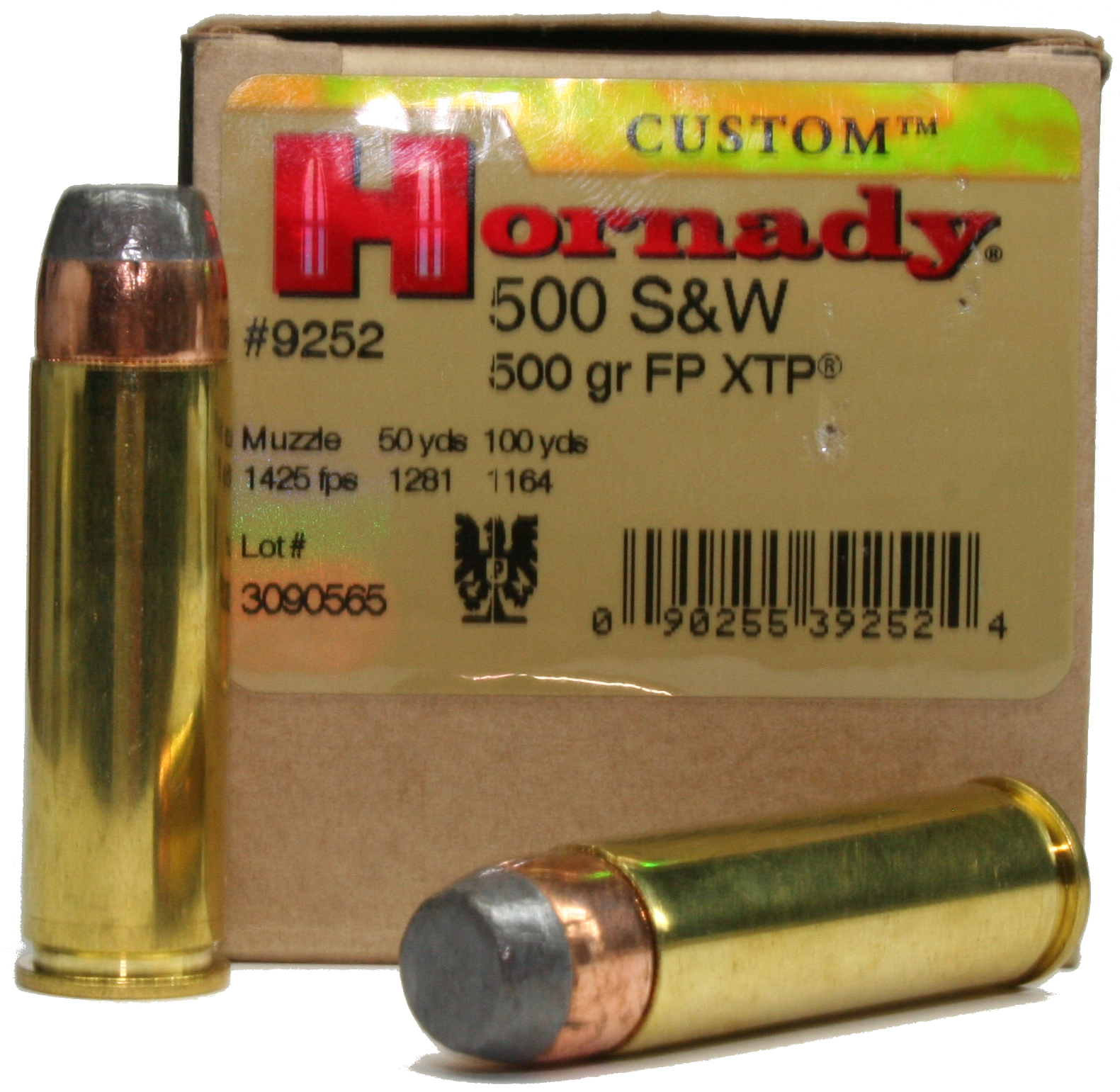 (Feature image at the head of this post courtesy Peter Gnanapragasam @ Wikimedia).