When I think about what first got me interested in guns and shooting it was the blending of the adventure of hunting, a fascination with the technology and engineering both of the arms themselves and the ammunition, and an appreciation of firearms as works of art, which included the art of the design, and the engraver’s art sometimes used to bring out the best in a design, and make it all the more fascinating.

It is when we look at the works of the great British gunmakers that we discover that blending of art, engineering, and a heritage of adventure expressed at its best. One of the small number of great London gunmakers is Holland & Holland, arguably most famous for their double-rifles and magazine rifles, a company that cut its teeth in seeking to make technologically superior sporting arms and ammunition, and also the company that fathered the belted magnum cartridges by creating the .375 Holland & Holland Magnum cartridge back in 1912: the cartridge on which almost all of the belted magnums were based.

Holland & Holland and the Art of the Gun

Holland & Holland were established back in 1835 by Harris Holland, who subsequently invited his nephew Henry Holland to join him as an apprentice in 1861, and in 1867 made him a partner, with the move to renaming the company Holland & Holland occurring in 1875. It was in 1883 that Holland & Holland established their name when they entered the trials organized by “The Field” magazine and won all of the rifle categories. 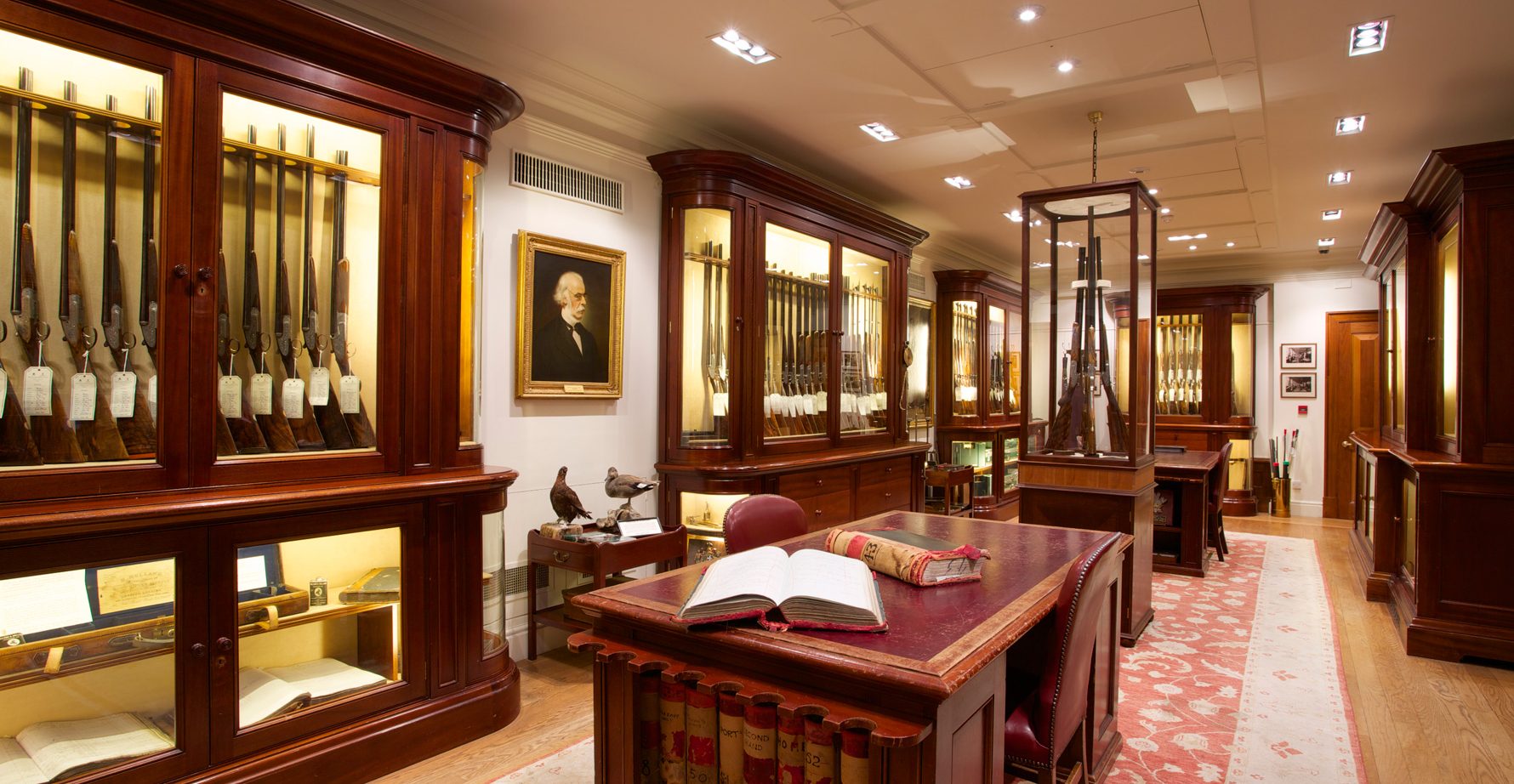 Two years after Holland & Holland’s successes in “The Field” trials Colonel George Fosbery VC invented and patented his “ball and shot gun” system which incorporated rifling into the choke of a shotgun barrel so that the barrel would produce a decent shot pattern but would also spin and stabilize a bullet. Fosbery patented his invention in 1885 and offered it to Holland & Holland who purchased the patent and named it the Holland & Holland “Paradox” gun, with production beginning in 1886.

Holland & Holland would go on to invent and patent their hand detachable sidelock system in 1908, the .375 Holland & Holland Magnum cartridge in 1912, and their own assisted opening mechanism for double guns and rifles in 1922, this being incorporated into their “Royal” guns and rifles. It was during this period of history that Holland & Holland would become most famous for their dangerous game double rifles, providing rifles to African professional hunters, and to Maharajas and Nizams in India. Holland & Holland’s rifles were used by knowledgeable sportsmen and women and a great deal of field experience was accrued during these decades, experience that was invested into making each Holland & Holland rifle as close to perfection as was humanly possible. The end result of this was that every aspect of a Holland & Holland rifle was evaluated and refined, not just the locks and the barrels, but the stock design, and the blending of all that technological knowledge into a work of the rifle-maker’s art.

Phillippe Grifnée and His Art

Among the world’s engraving artists Belgian Phillippe Grifnée stands out among the best of the best. Grifnée was a student of master engraver and teacher Rene Delcour of the L’Ecole d’Armurerie de Liege and graduated from there in 1970. After graduation Grifnée worked with August Francotte and became an instructor at a number of prestigious courses in various institutions before returning to the L’Ecole d’Armurerie de Liege as a teacher.

Phillippe Grifnée’s work proved to be so extraordinary that he was approached by Holland & Holland to do some work for them in 1988 and was persuaded to work exclusively for them from 1992-1997, after which time he worked free-lance from his own studio at Xhendelesse, in Wallonia, Leige, Belgium. Sadly he passed away unexpectedly in May 2012 leaving a legacy of some of the most outstanding firearms engraving work the world has ever seen.

Two of Phillippe Grifnée’s most famous engraved rifles were done for Holland & Holland, one in .600 Nitro Express featuring a rhinoceros theme, and the other a .700 Nitro Express with an elephant theme.

The .600 Nitro Express cartridge was designed by W.J. Jeffrey & Co. in 1899 and entered production in 1900 as a stopping caliber for use on the world’s most dangerous game, be it African or Asian elephant or rhino, buffalo or gaur, or tiger in the thick jungles of India.

It may be difficult to understand why it was thought necessary to create such a powerful cartridge, one that would prove to be a challenge to not only fire, but to design and create a suitable rifle for.

The .600 Nitro Express appears at the end of the black powder era, a time when the usual dangerous game rifle was an 8 bore, or even a 4 bore. So by comparison with the 8 and 4 bore the .600 Nitro Express looked almost diminutive, but packed a rather more significant punch in a lighter and more manageable rifle. This would prove to be a cartridge that would require all of Holland & Holland’s accumulated technological experience to build surprisingly lively and point-able double rifles that incorporated just enough weight to control the recoil energy with an efficient and intelligently thought out stock and overall rifle design.

The .600 Nitro Express delivers recoil that will not only push straight back, but that also tries to cause the rifle to rotate vertically. If you look at the picture of the Holland & Holland .600 Nitro Express rifle above you will note that the stock is given a significant drop at heel, and that the recoil pad is angled to drive the rotational recoil into the shooter’s shoulder in such a way that the rifle butt will not tend to slip down out of contact, but will instead maintain a firm contact enabling the shooter to keep control for the second shot. Length of pull is 15¼ inches as suits the need to absorb the recoil in the most efficient way. By such efficient design the overall weight of this rifle is able to be kept down to a very manageable 13 lbs. 3 oz, not a lot heavier than the typical 11lb of a .500 Nitro Express.

The Phillipped Grifnée Holland & Holland .600 Nitro Express was done on a rhinoceros theme, a celebration of a fascinating family of animals.

On the left side and bottom of the action are featured White Rhinos.

On the trigger guard is featured an Indian Rhino (with the White Rhino visible on the action bottom).

On the right side of the action the Black Rhino is featured.

On the action top are featured a Javan and a Sumatran Rhino.

This Phillippe Grifnée engraved Holland & Holland .600 Nitro Express double rifle stands out as a blending of the very best that Holland & Holland are capable of creating, incorporating as it does, decades of development and field experience, with all that embellished by some of the most beautiful engraving ever created. The rifle incorporates platinum inlays and is fitted with traditional British open “V” rear sight with leaves graduated for 50 and 100 yards. The front sight is an easy to see bead with a flip-up Moon Sight. The treble grip action has removable firing-pin discs. 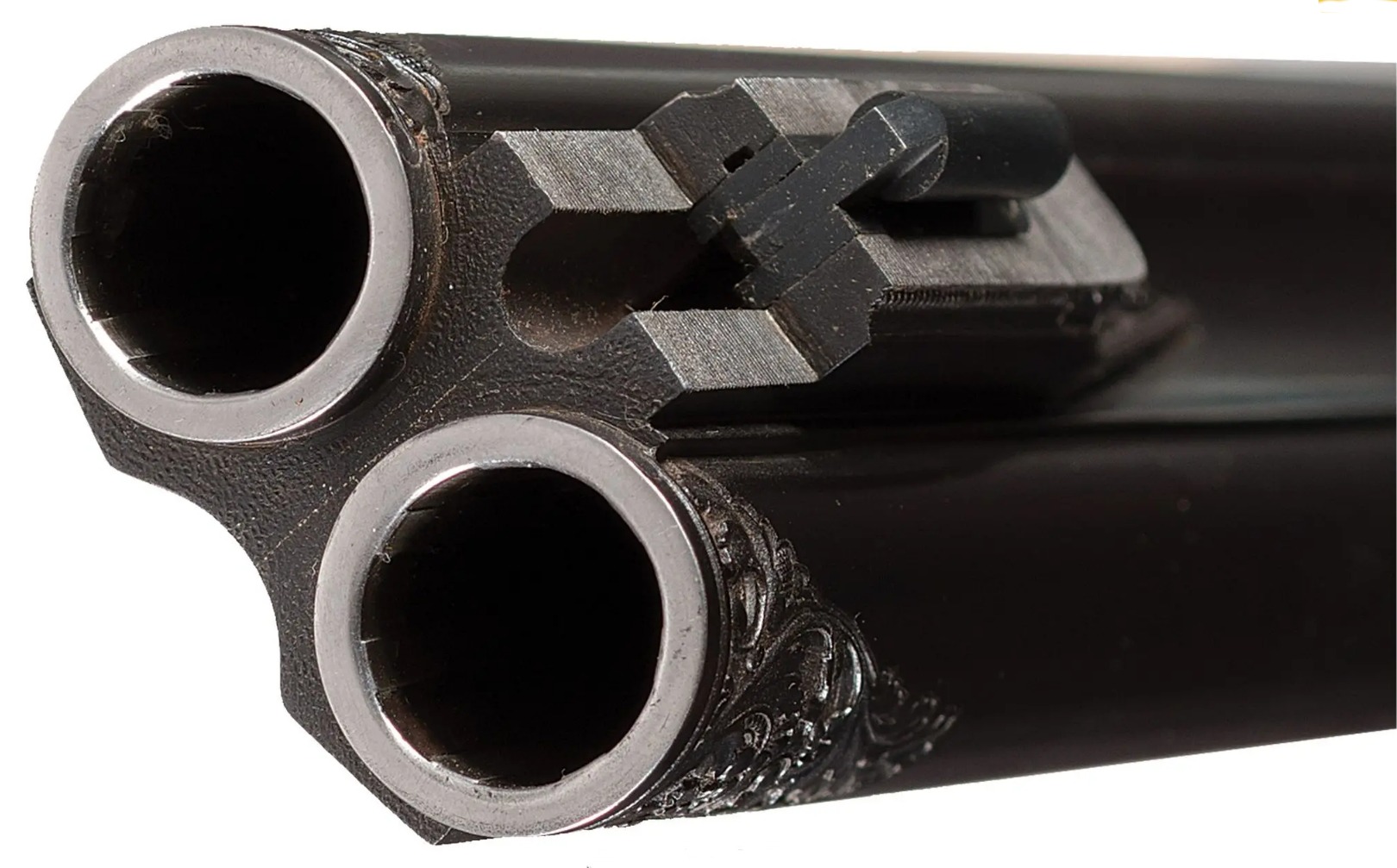 The rifle has an articulated front trigger, a desirable feature on a rifle of this recoil level, and comes with sling swivels and an alligator skin case with lift-out tray and lined with green leather with a gold embossed Holland & Holland maker’s label in the lid.

This rifle is coming up for sale by Rock Island Auction at their Premiere Auction to be held on May 4th, 2019.

You will find the sale page for this quite exquisite rifle if you click here.

Not wishing to settle for a .577 Nitro Express by Holland & Holland, which would have been a superb choice, Feldstein decided to go for something even bigger than the .600 Nitro Express and created the .700 Nitro Express, a perfect caliber should anyone decided to resurrect the Tyrannosaurus Rex and then find that they need some assistance in stopping it before it eats an excessive number of people. That being said the .700 NE would be a superb hippo stopper and would of course be a good choice for elephant in thick bush.

The .700 Nitro Express approaches the weight and heft of the old black powder 8 bore and 4 bore elephant rifles and so, with their long experience in making double rifles of that size, Holland & Holland were able to make a .700 Nitro Express rifle for William Feldstein, and for other customers with sufficiently deep pockets to be able to afford not only to commission one of these rifles, but also to be able to feed it with ammunition.

One customer for a Holland & Holland .700 Nitro Express double rifle commissioned it with engraving by Phillippe Grifnée in an African Elephant theme. Between them, Holland & Holland and Phillippe Grifnée created a rifle that is the epitome of the rifle-maker’s art. The rifle tips the scales at 17 lbs. 13.7 oz., and will be capable of taming the recoil and keeping the rifle controllable for the second shot: but in addition to that Holland & Holland will have built the rifle so that the weight is concentrated between the hands in such a way that it does not feel as if it weighs almost 18 lbs.

I had the experience many years ago of handling a Holland & Holland .600 Nitro Express double rifle made for Indian royalty. The rifle actually weighed 16 lbs. but it was so lively to handle and bring to the shoulder that it felt as if it only weighed 12-13 lbs. No doubt the .700 Nitro Express will be similar and prove to be surprisingly lively in the hands. That being said it will still be important for someone who plans to use the rifle on dangerous game to spend time in the gym, preferably with a competent personal trainer who understands the sort of training that is needed, and to spend time at the range practicing with the rifle so its use becomes instinctive.

This rifle has much the same features as the .600 Nitro Express we looked at previously; treble grip action with removable firing pin discs, rear sights graduated for 50 and 100 yards, folding front moon sight, 15 inch length of pull with appropriate drop at heel to direct the recoil in the best possible way. The rifle has platinum inlays and a manual safety catch labeled “Safe” and “Fire”. 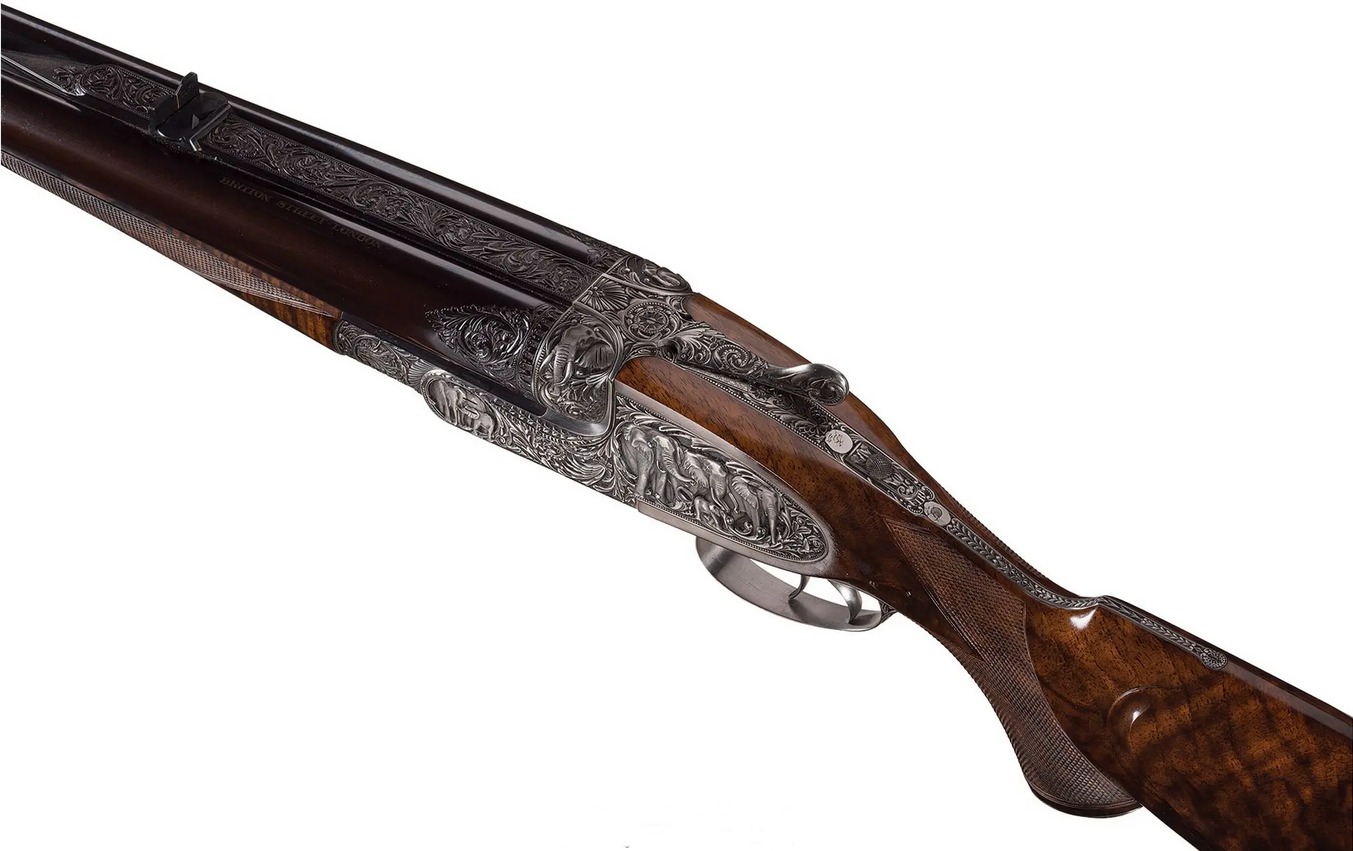 This rifle is also coming up for sale by Rock Island Auction at their Premiere Auction to be held on May 4th, 2019.

You will find the sale page for this graceful Tyrannosaur stopping work of art if you click here.

Phillipe Grifnée has left behind a legacy of guns and rifles with quite breathtaking deep engraving: and in the case of these two double rifles that engraving has the “alive” feeling that a great artist is able to impart into their artwork. These rifles truly are a lasting tribute to the memory of a unique artist who was taken from this life all too soon.