The AEC buses and trucks became the iconic British commercial vehicles of the pre-war and post-war periods. As I was living in England in the fifties and sixties it was one of those classic post box red AEC Regent double decker buses I would board each morning to head off to school. The favorite place to sit was directly behind the driver so as to watch him working the pre-selector gearbox and he maneuvered the big red bus through the traffic. There’s something special about these classic London buses, the sound of the clunky diesel engine, the unique appearance, the driver sitting in his isolated cubicle at the front beside the engine. Sights and sounds that bring back some fond memories.

One of these pillar box red AEC double deckers even became a movie star. British pop star Cliff Richard and rock group The Shadows co-starred with the AEC Regent in the movie “Summer Holiday“.

The observant who watched the Summer Holiday clip will have noticed that the emblem on the radiator of the AEC bus looks just like the London Underground emblem. That’s because it pretty much is. AEC stands for Associated Equipment Company and it was a division of the Underground Group.

AEC somehow managed to build trucks and buses that had a peculiarly British quality about them. Its no wonder that the iconic London double decker bus was the AEC Regent. American actor Sydney Poitier has one co-star with him in the opening sequence of the movie “To Sir With Love“. Before the Routemaster came in to steal the show the AEC Regent was THE double decker London bus and in my mind still is. However, if you were going outside of London and traveling in the country then it would not be a red double decker that would carry you but a single decker, the AEC Regal. 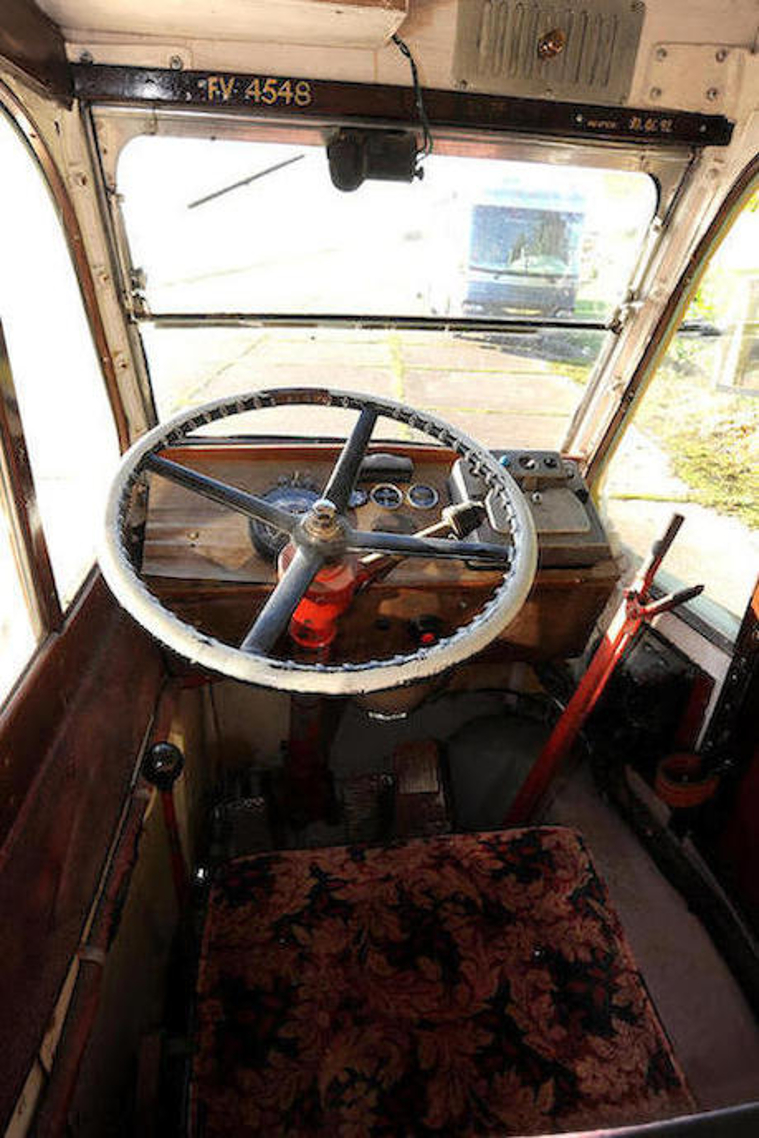 The AEC Regal is basically an AEC Regent with no top deck. This is the driver’s seat or “cockpit” of this wonderful machine.

The AEC Regal was essentially the AEC Regent but with only one deck. This enabled it to travel a bit faster than its double deck sibling and to travel under bridges that its taller brother could not. It may have a pre-selector gearbox like the Regent or it may have a “crash box” which always informed the passengers of the skill level of the driver. Some joked that it had three gears; “slow, very slow, and just about stopped”. 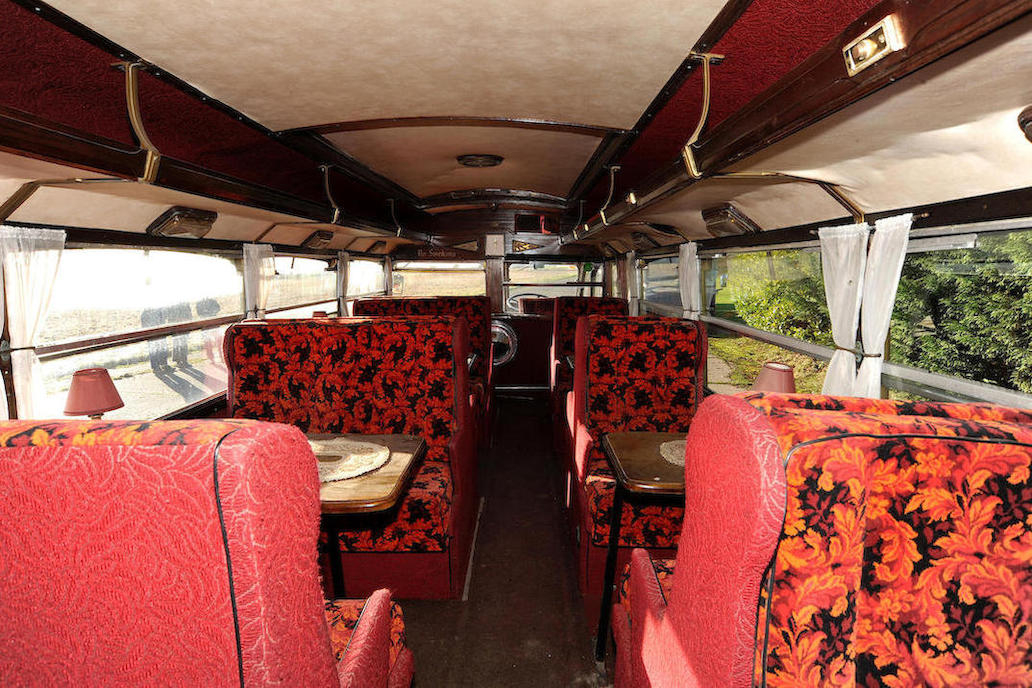 The interior of this AEC Regal has been made a bit more luxurious than typical with Pullman style seating.

The AEC Regal was first introduced in 1929 and along with the Regent was the bus that features in British movies, and British lives before the war, during the war, and after the war. 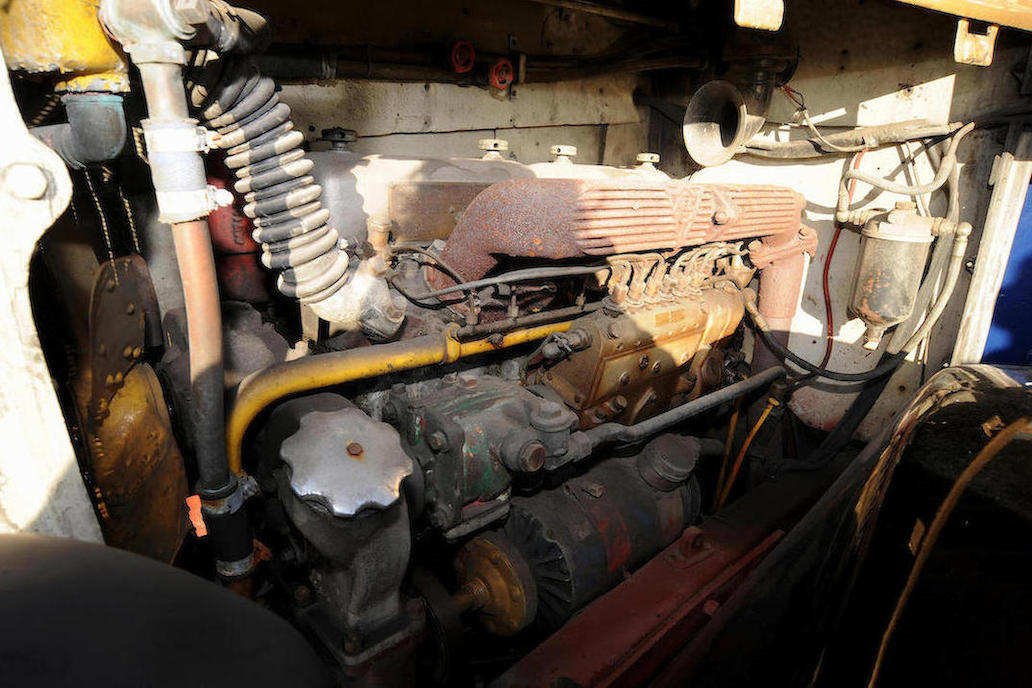 This AEC A173 7.7-litre diesel engine with its old fashioned but reliable mechanical fuel pump is one of those “roll up your sleeves and fix it” type of engines. No computers to confuse. Fixable with a spanner and some knowhow. And it sounds like a “proper” diesel engine.

The blue and gold AEC Regal in our pictures is one of those vehicles that makes me think “how could you not want to own it?” It packs in all the sights and sounds of the Britain of the pre-war and post war era. Its a historic icon and must be fantastic to drive or to ride in.

It is coming up for sale by Bonhams at their The Beaulieu Sale on 3rd September 2016 at the Beaulieu, National Motor Museum, Brockenhurst, Beaulieu.

If you do decide to acquire it I suggest getting together with some good friends and taking it for your very own “Summer Holiday”. It looks like the perfect vehicle for it. 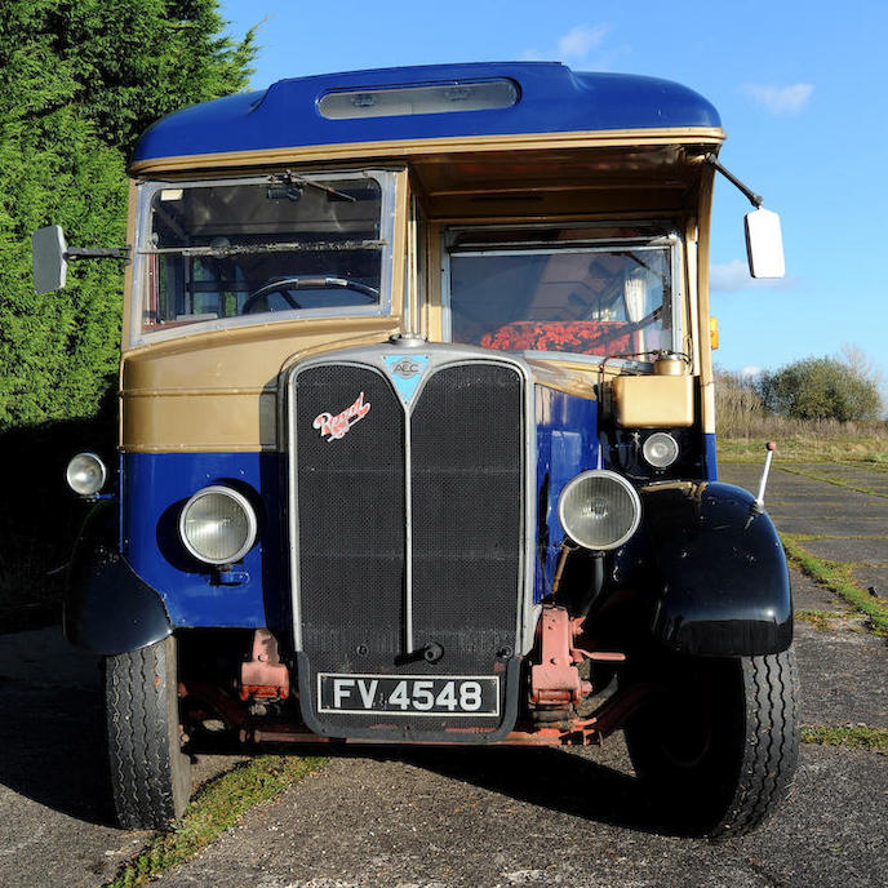