John Moses Browning was a prolific firearms designer. Trained by his father Jonathan Browning in his gun shop from the age of seven John M. Browning created a number of the iconic firearms of the nineteenth and twentieth centuries, many of which are in use in this twenty first century. Browning was a man who did not believe in retirement much like Italian Renaissance artist Michaelangelo. Both died leaving partly completed works for others to finish. In John M. Browning’s case the pistol he was working on the day he passed away was to become known to the world as the Browning Hi-Power, a pistol that is still popular today. 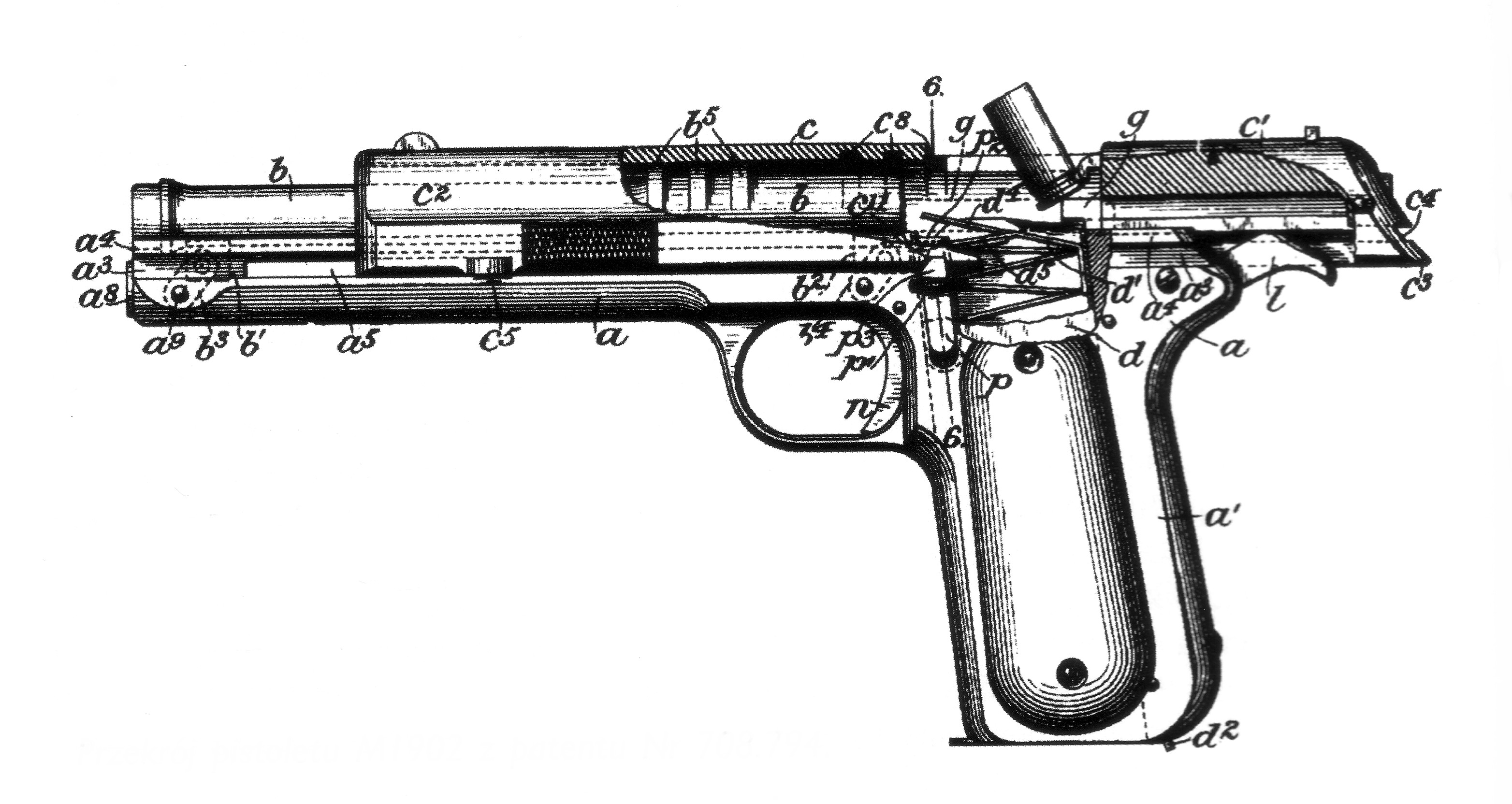 Browning’s Colt M1902 Automatic pistol was a design variant of his original M1900 with some necessary improvements. With the dawning of a new century military forces were embracing the new smokeless powder and the vastly improved firearms that could be created around them. The automatic pistol was certainly seen as the way of the future to replace the revolver and Browning was one of the designers who created what he believed would become a rugged military pistol for the twentieth century. He was basically right. He needed to do further improvements which eventually led to the creation of the M1911, the pistol that became the standard by which others were judged, but his overall concept for the M1902, including the cartridge for which it was chambered were spot on. The .38 Automatic cartridge (aka .38ACP) is of about the same calibre and power as the 9mm Parabellum which has become the de-facto world standard. 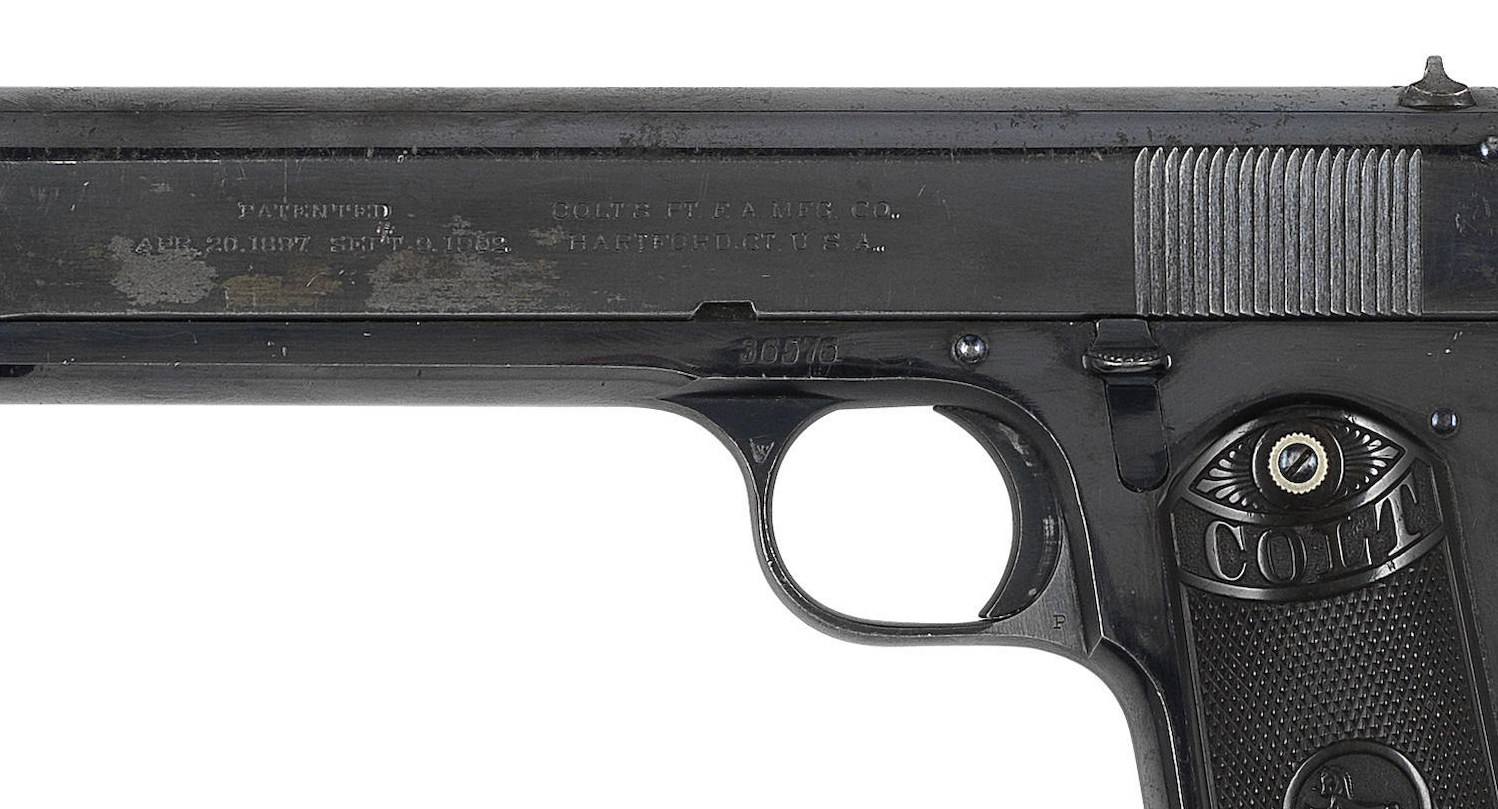 In this close up of the pistol for sale we can get an idea of the present condition of this piece. This pistol was sold in Britain and has British proof marks. Estimated sale year is 1914.

The M1902 was produced in two models, a military model and the civilian sporting model. This pistol that is coming up for sale by Bonhams at their Modern Sporting Guns auction to be held on 12th May 2016 in London is a military model with British proof marks whose serial number suggests it was sold in 1914, the first year of Britain’s involvement in World War I (Note: the slide markings on this pistol are of the simplified type estimated to have been introduced around 1918). As British military officers normally purchased their own pistol at this time in history it is quite possible that this Browning may have been purchased privately by a military officer although I think it more likely to have been purchased by a civilian as ordinary citizens were not prohibited from owning handguns in Britain back then, and this pistol is not in a standard military calibre for that period (i.e. .455 Automatic). The firearms acts across the British Commonwealth did not appear until the end of the First World War and were arguably motivated by the spectre of the Russian Revolutions and Civil War. The history is well documented in Colin Greenwood’s definitive book “Firearms Control” which is long out of print but can be found on Amazon if you click here. 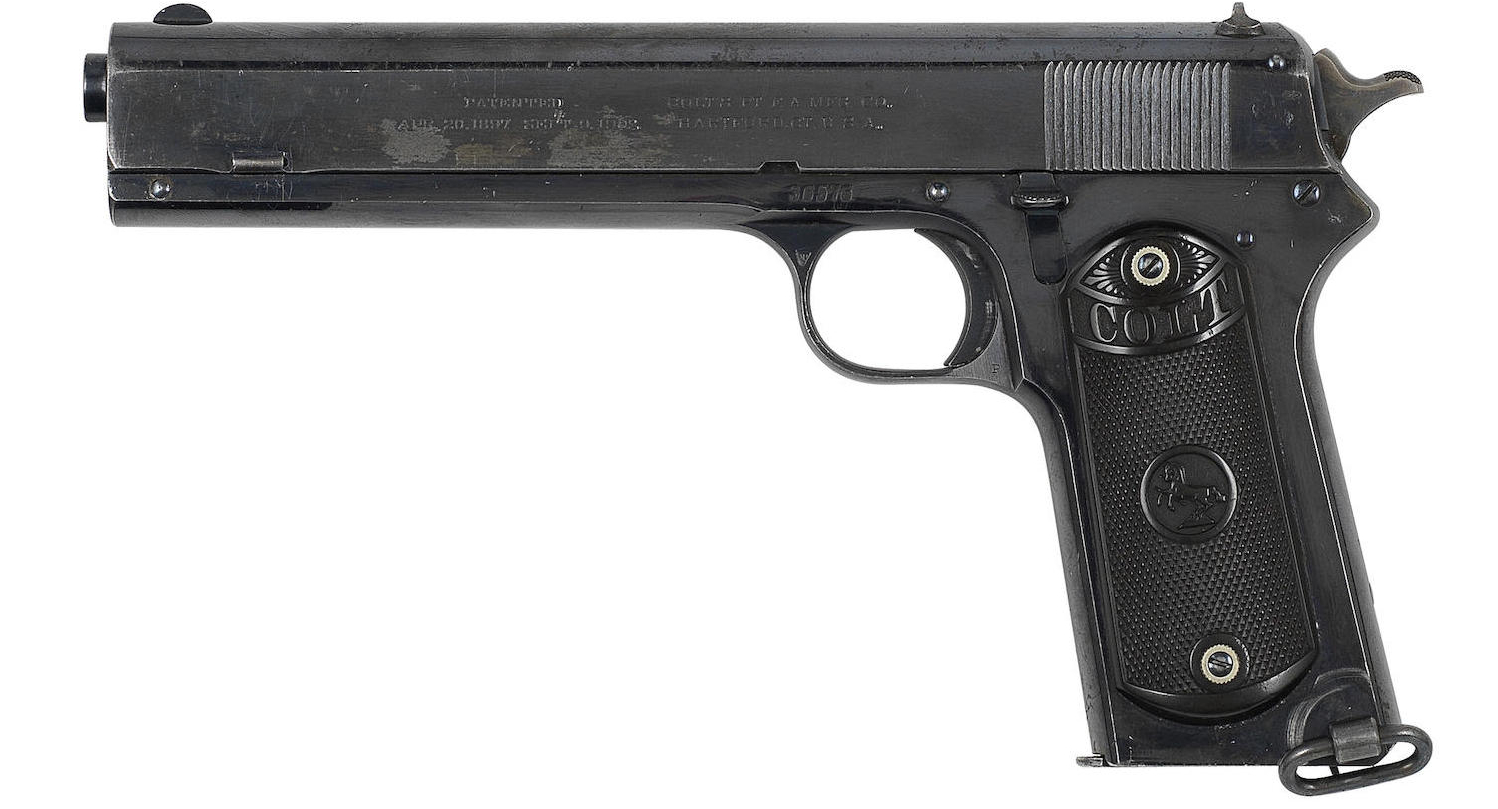 Browning’s M1902 was and is a beautifully designed pistol with its own distinct character. (Picture courtesy Bonhams).

The M1902 was a re-design of the M1900 which incorporated the improvements dictated by the US Army in testing. It was able to be stripped without tools, had a slide stop, and the plug at the end of the recoil spring housing was altered so it could be pushed in which would then take the tension off the transverse bar that locked the slide to the frame. The grip was extended and this increased the magazine capacity by one round, and a lanyard was added. The slide serrations were also changed to the triangular cuts that were to become a feature of the later M1911. All this being done the further testing done by the US Military led them to reject the design, the final nail in the coffin of the M1902 having been the experiences of American servicemen in the Philippine-American War of 1899-1902 which led to the army demanding nothing less than a .45 calibre handgun to ensure stopping power against a determined foe.

John M. Browning’s M1902 is best considered as a developmental prototype that led to the creation of the M1911, which the US military adopted and fell in love with. The US Marine Corps is still using them, nowadays designated the M45 MEUSOC. Thus for the collector this M1902 forms an essential example of the stages of that development.

You will find the Bonhams auction page for this pistol if you click here. Asking price is expected to be in the order of £1,500 – £2,000.

Below is a nice video showing how to field strip this pistol. (Courtesy MrColt45acp).

Getting an M1902 shooting is easy to do. The .38 Automatic (aka .38ACP, NOT the same as the .380ACP!) uses a cartridge case dimensionally the same as the later but much more powerful .38 Super. Despite the cartridge case dimensions being identical the loading data is completely different. Any attempt to fire a .38 Super cartridge in an M1902 pistol will result in extreme nastiness for the pistol and the shooter, i.e. it will scrap the gun and make a mess of the shooter – please don’t try it. You will have noticed in the field stripping video that the only thing that stops the slide from flying back at the shooter’s face is the small slide stop wedge. Attempting to fire a .38 Super in the pistol can result in that slide stop wedge failing with the result that the slide will then come flying back at the shooter’s face. This will not improve the shooter’s appearance, not even a teensy weensy little bit.

I would strongly recommend that you not try substituting other bullets of similar weight with the Hornady reloading data. Use the listed components as exactly as you can remembering you are reloading a handgun that is around a hundred years old, and please get the pistol checked by a competent pistol smith before shooting it. None of us needs to get uglier than we already are!

That being said here is a video of someone who is enjoying shooting his M1902. If you have one in good shooting order I hope you get to enjoy yours also. (Video courtesy Erik Winter).