If you’ve spent any time shooting a cap and ball revolver you will have discovered that sometimes a fired cap attaches itself to the hammer as it is cocked and then drops into the action ensuring the revolver will not fire until it is turned upside down and the offending cap shaken out. When this happens on the shooting range it’s just annoying. But of course if you should happen to have a number of Sioux Indians coming at you intent on taking your scalp such an event is at another level above annoying. Although the muzzle-loading cap and ball revolvers were not particularly quick to re-load, unless you had a spare loaded cylinder or two, the real downside of them was their unreliability. As self-contained metallic cartridges came into use the reliability of the revolver was revolutionized; yes it did become a bit quicker to re-load – though still slower than having a spare loaded cylinder which could be swapped out on an open top Colt in very short order. 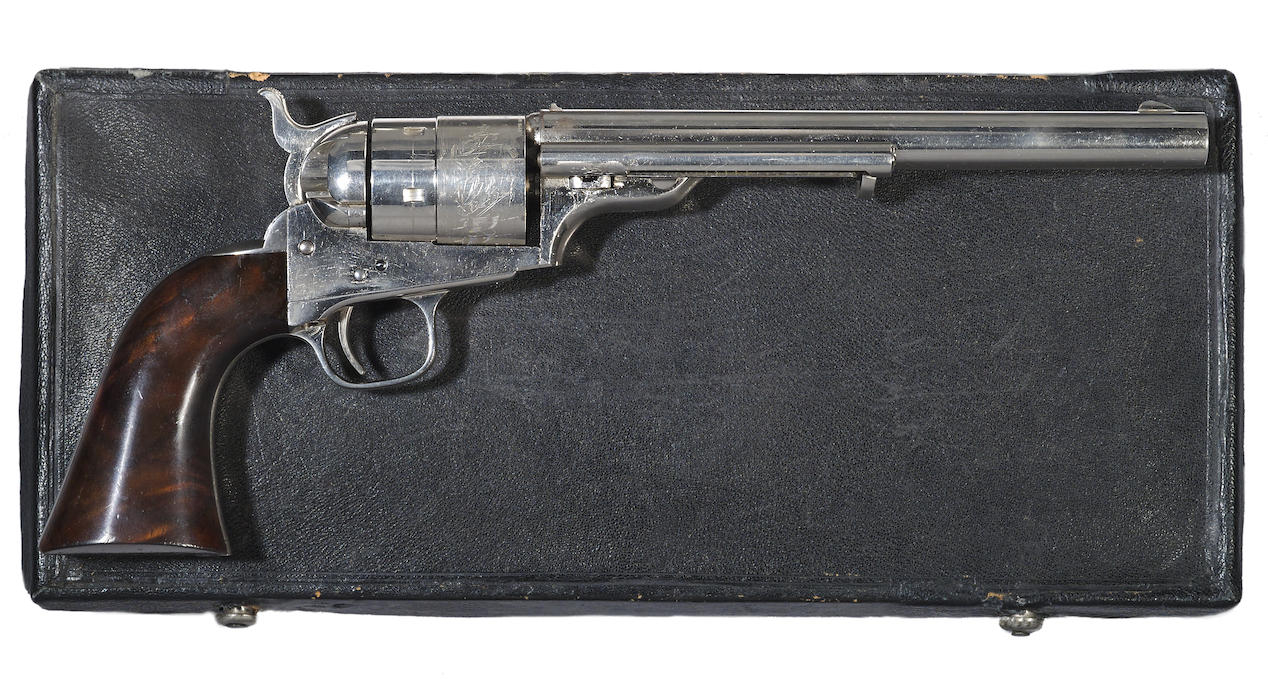 The early model Colt that adopted metallic cartridges was kept as close in design to the cap and ball model as possible. Already in this William Mason design we see the features that would become iconic in this revolver’s sucessor the 1873 Single Action Army. We see the loading gate and ejector rod, grip and trigger. Essentially what would happen is the closing of the top of the frame and the Single Action Army would be born. (Picture courtesy Bonhams).

So when the Rollin-White patent on bored through cylinders to enable the use of a metallic cartridge in a revolver expired and was not allowed to be renewed in January 1870, Samuel Colt commissioned William Mason to re-design the open top 1860 Army and 1851 Navy revolvers to use the rimfire cartridges, and later the centerfire cartridges that were available. William Mason kept the design as much like the 1860 Army as he could which, in theory at least, would have allowed either the reloading of the revolver one cartridge at a time or the swapping of the cylinder with another loaded one. Mason’s thinking seems to have been to try to give the user the best of both worlds and given that the revolver users were themselves transitioning to a new technology that seems to be smart thinking. Not only that but Colt had an inventory of cap and ball revolvers and parts which it wanted to earn some money out of so using up that inventory by converting the revolvers from cap and ball to cartridge made good business sense.

The open top design did not impress the US Army however who were concerned that it was needlessly weak. William Mason then re-designed the revolver with a full solid frame and that was to become the Colt Single Action Army revolver of 1873, the “Gun that won the west” along with the lever actions that began with the Henry and the various models of Winchester and Marlin. The definitive single action revolver that we still use and enjoy both from Colt, from the likes of Uberti, and the modern re-designs such as the Ruger Vaquero, Blackhawk and Super Blackhawk.

The antique 1871/72 Colt revolver we are featuring was owned by a Capt. Will M. Smith who organized a volunteer infantry company in 1898 after the U.S.S. Maine was sunk and that company was then mustered into the regular army becoming Company F, 161st Indiana Volunteer Infantry. The revolver is in quite reasonable condition for a revolver that has been used. The condition description given by Bonhams is as follows:-

“Retains about 90% to 95% of nickel-plated finish; front of wedge with most of plating flaked off; scratches and small dents around wedge on both sides of barrel lug. Some nickel finish absent near breech and on ejector rod housing; housing with a series of small dents. Some flaws beneath nickel finish on frame. Gripstrap with a few small areas with nickel finish flaked away. Cylinder with drag mark and losses to nickel on face around each chamber. Grips retain perhaps 95% original varnish with some wear or staining on both sides; a few minor scattered storage marks. Case very good with some small areas of loss to leather covering and scattered storage marks. Interior with light fading wear; lid with some staining.”

You will find the Bonhams auction page for this unusual revolver if you click here.

These transitional revolvers were made by Colt for a short period of time, from somewhere around 1871-2 into 1873 when the new Colt Single Action Army went into production so they tend to be quite rare collector’s items typically too valuable to go and enjoy a shoot with one. But all is not lost, Uberti make replicas of these transitional Colt revolvers which you will find on Uberti’s web site if you click here.

There are four models to choose from in either .38 Special or .45 Colt with barrel lengths from 4.75″- 8″ long. This might just be the pair of revolvers you need to turn up to your next Cowboy Action shoot with. Prices on these replica revolvers begin around US$539.00 so they are a lot more affordable than an original collector’s piece, and you can shoot them so they are arguably a lot more fun.

Uberti’s short promotional video is below.

Hickok45 also has a look at these in the video below.