The gun-smithing firm of Daniel Fraser had a short but impressive history that lasted 24 years: and that was brought to an end when Daniel Fraser contracted a chill whilst out grouse shooting in 1902 and passed away in August of that year at the age of 57 years. Daniel Fraser spent his early gun-smithing years under the tutelage of the great Alexander Henry and a number of of Fraser’s patents were owned by Henry. Although his relationship with Alexander Henry was reputed to be good it ended abruptly when Daniel Fraser resigned from Alexander Henry’s employ on Friday August 15th, 1878, was married on Saturday 16th, and opened up his own shop at 4, Leith Street Terrace, Edinburgh, on Monday 18th. 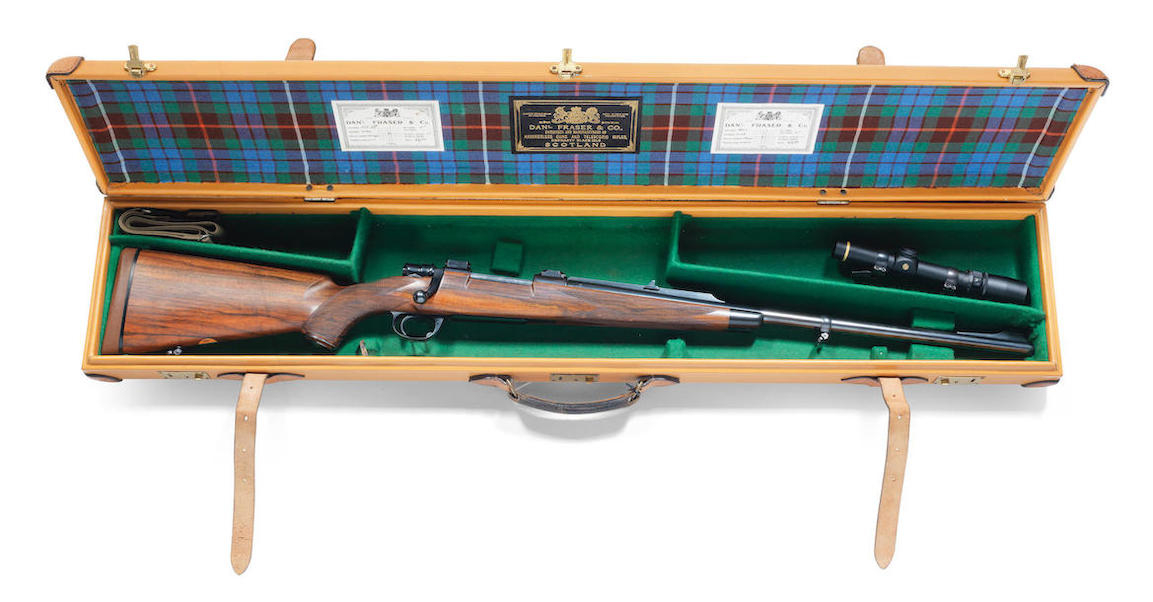 This Daniel Fraser & Co. .375 H&H Mauser action rifle is proofmarked “81” which would most likely be the year of manufacture of the barreled action.

Daniel Fraser’s son’s Donald and James continued their father’s business up to around 1922 when the business name was bought by English gunmakers A. Sanders of the British seaside town of Maidstone. In 1983 the company was sold by A. Sanders to Bernard Horton-Corcoran, who was a well known and respected big game hunter and gunmaker. Bernard Horton-Corcoran was a Welshman who lived in Scotland: a man who had built his first rifle at the age of 22 years. 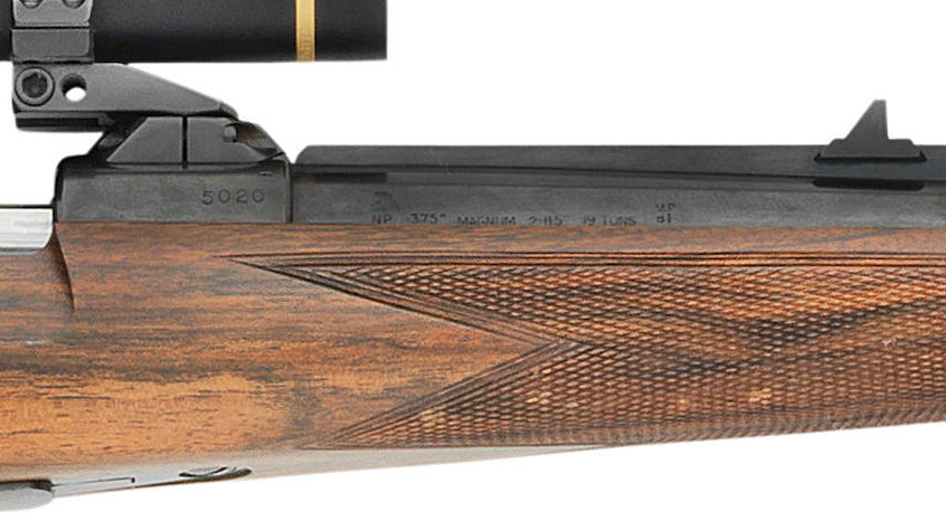 “NP 81” proof mark on this rifle suggest that the barreled action was made that year.

Bernard Horton-Corcoran made rifles under the Daniel Fraser & Co. name at Peddieston, Cromarty, on the Black Isle, up until 1997 when the company name was purchased by Dickson & Macnaughton.

This rifle comes in a traditional fitted case with maker’s labels.

This rifle, built on a Mauser action with side safety catch, features a quarter rib with a fixed leaf rear-sight calibrated for 100 yards, complimented by a ramp fore-sight with traditional folding moon-sight. The stock is in the proven modern classic straight style with a Decelerator recoil pad, a combination that greatly reduces felt recoil. The quality of the walnut stock can be appreciated from the photographs.

The rifle is fitted with a Leupold VX-3 1.5-5×20 rifle-scope in quick detachable mounts. The steel pistol grip cap has a trap for convenient storage of spare small parts. Weight is 10lb. 3oz. with the rifle-scope fitted. Length of pull is 14in. (13in. stock), and the barrel length is a sensible 24in. The rifle has London nitro proof marks and is chambered for the .375 Holland & Holland Magnum cartridge.

This rifle is coming up for sale by Bonhams at their Modern Sporting Guns sale to be held in Knightsbridge, London, UK, on November 30th, 2017.

This is a superb example of the quite rare Mauser action Daniel Fraser sporting rifles.