At the beginning of the “Jet Age” in the fifties and sixties, as the U2 spyplane was developed and the British and French got together to create the Concord(e) car manufacturers decided to get into the act and create gas turbine cars. A gas turbine can use very low grade fuel, in fact when Chrysler created their gas turbine car the President of Mexico discovered that it would run quite nicely on tequila. Even stodgy old Rover in Britain experimented with a gas turbine in their Rover P4 based JET 1. You will find that story in the book “Rover P4” by Malcolm Bobbitt on pages 84-85. You can get the book from Amazon if you click here.

Those involved in the Indianapolis 500 motor race also decided to try out these gas turbine cars and in particular STP president Andy Granatelli had the money and the inclination to give it a go. In 1961 a driver named John Zink (aka “Trackburner”) had built a gas turbine car for the race which had only lasted for a few laps. Andy Granatelli reckoned that his group could do better so the first turbine car from STP was created to run in the 1967 Indianapolis 500. The car was driven by Parnelli Jones and it almost won the race, its transmission failing close to the end it finished up being awarded sixth, nonetheless it demonstrated that the concept was not too far fetched to achieve success.

The short video below summarizes the story.

Having so narrowly lost the race in 1967 the decision was made to go back in 1968 and have another go. Already there were those who wanted to make things as difficult as possible for the turbine cars and rule changes to the formula for the 1968 cars limited the amount of power the turbine was allowed to produce. Andy Granatelli went to Lotus in Britain to work on a new car that would fit the 1968 restrictions and yet still have a good chance of winning the race. Lotus designer Maurice Phillippe created a wedge shaped body for the new car which could accommodate the gas turbine, which had to be de-tuned down to 500hp to fit with the rule changes, behind the driver instead of beside the driver as in the 1967 car.

The car was designated the Lotus 56 and four were made to provide three for entry into the race and one as a back up. British Formula 1 driver and winner of the 1966 Indianapolis 500 Graham Hill was chosen as one of the drivers. The others being American drivers Joe Leonard and Art Pollard. Just like its predecessor the Lotus 56 was four wheel drive, something that was made competitively possible because of the light weight of the gas turbine engine, and something that was necessary because of the high torque produced by the gas turbine at low speeds.

Parnelli Jones moved into the role of chassis tuning of the Joe Leonard car for the 1968 campaign and his work paid off. Joe Leonard set a new speed record for Indianapolis of 171.559mph beating Graham Hill’s new record of 171.208 mph not long after it was set. These speed records earned Joe Leonard and Graham Hill pole positions on the grid and a place in history as the first and only gas turbine cars to do so.

In the 1968 race Graham Hill suffered loss of a wheel after completing 110 laps. Joe Leonard managed to lead the race for 31 laps and was vying for the lead when his car failed with a broken fuel shaft after 191 laps (nine laps from the end of the 200 lap race). Art Pollard’s car was also forced to retire with a broken fuel shaft.

After the race Graham Hill’s car number 70 was displayed at the STP headquarters and then given to NASCAR driver Richard Petty. Subsequently the car was given a complete restoration by Clive Chapman, the son of Lotus founder Graham Chapman, and his company Classic Team Lotus and by Andy Granatelli’s son Vince Granatelli.

After the 1968 race the turbine cars were banned from Indianapolis. They had been too successful and posed the risk of completely changing the character of that great race. Perhaps we will see the return of gas turbine cars to motor sport one day, perhaps not. One way or another this car made history despite not winning the race and stands as one of the more important historical milestones in the quest for speed.

This car is coming up for auction at RM Sotheby’s Monteray auction to be held at Portola Hotel & Spa, Monterey, California between 19th-20th August 2016.

This is a race car that makes an engine noise like that of the Batmobile. So powerful it had to have four wheel drive to keep the wheel-spin under control. How could one not want it? 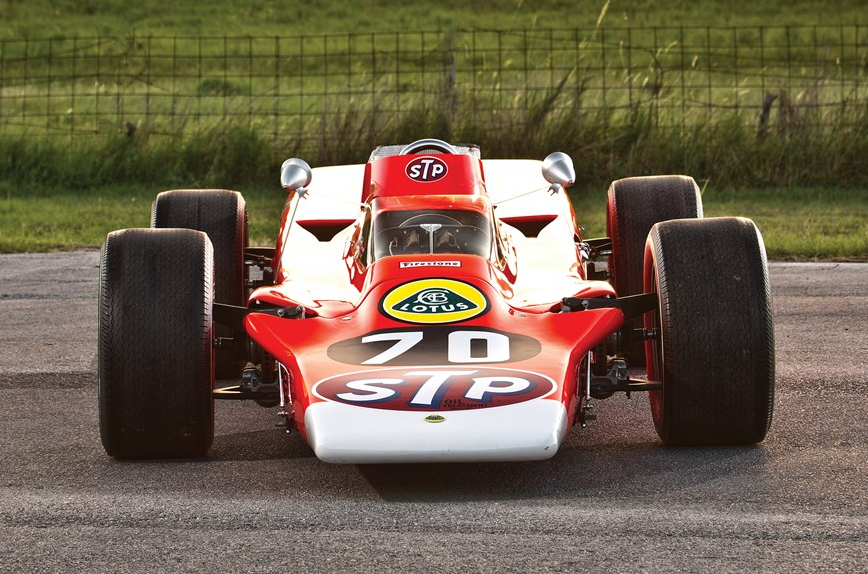